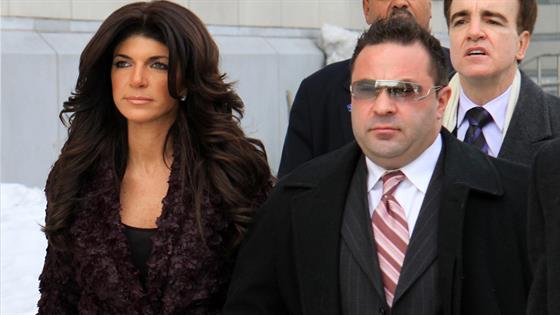 Joe Giudice is rolling with the punches.

On Thursday, the Real Housewives of New Jersey alum shared a video of his workout for his Instagram followers. Simply captioned "I need a tan," the star is seen practicing his kickboxing technique with a punching bag in a naturally lit gym. As he says in the beginning of the video, "Starting to gain weight here. Ain't good."

Just before his workout video, Joe, 47, shared an inspirational quote on the 'Gram. "Life is too short to tolerate nonsense," the photo read. "Cut out negativity, ignore gossip, and let go of fake people and their drama!" He shared the post with no caption.

All this comes in the middle of the news that he and wife Teresa Giudice have split after 20 years of marriage. While the couple has not officially filed for divorce, E! News confirmed on Tuesday that the couple is no more.

As an insider explained, "Teresa and Joe's marriage is completely over. Teresa is in no rush to file for divorce, but their relationship is done."

Their split is perhaps unsurprising. The family of six (they share four daughters, Gia, Gabriella, Milania and Audriana) has had a rough year. After spending a few years in prison followed by being held by ICE for a few months, Joe was deported to Italy.

Teresa and the couple's daughters traveled to visit him in November, perhaps giving some hope that their relationship could pull through, but Teresa had made clear to Andy Cohen that she didn't want to do a long-distance relationship.

I need a tan

During the Season 9 reunion of RHONJ, Teresa told Cohen she wasn't willing to do long-distance. (His deportation was pending at the time of these comments.)

"It's like starting a whole new life," she explained, noting that her girls have "been through so much already."

"So, I mean, I'm not doing a long-distance relationship. I'm just not doing it. I want somebody with me every day," Teresa continued. "I know exactly what happens, I'm sure he'll be with other women. It happens. We do the long-distance thing? It's not going to work. I'll be like, ‘bye bye.'"

Despite the split, things seem to be amicable between the two. Their daughters will reportedly be spending Christmas in Italy with their father, while Teresa will have to stay behind due to her filming schedule.

On Tuesday, Joe shared a video of his Christmas shopping adventures, excitedly writing in the caption, "It's been a while since I baught [sic] my angels a Christmas gift."

As Teresa wrote in the comments section, "What about mommy for helping…[You're] welcome Daddy."