If there's one thing pop culture lovers can expect to see from the Golden Globes, it's that celebrities always bring the drama. From an explosion of jewel-adorned designs to a confection of feathers and billowing trains, the annual ceremony is filled with eye-catching style.

The red carpet fashion is so good at the Golden Globes, it's almost unfair that Hollywood's biggest stars can't receive an award for their lewks alone. (They're winners in our heart, though!)

Because the 2020 Golden Globes will kick off awards season in just a matter of days, E! News is reminiscing on the best fashion to ever hit the red carpet. From Jennifer Aniston's memorable and oh-so-chic suit (yes, the one she wore sans a shirt underneath her blazer) to Lady Gaga's vibrant blue ballgown that paid tribute to Judy Garland in A Star Is Born.

2020 Golden Globes: Relive Jennifer Lopez’s First and Only Other Nomination From 1998

To see what your favorite stars slipped into for the special occasion, keep scrolling through our gallery below. Tracee Ellis Ross, Constance Wu, Eva Longoria and so many other celebrities made the red carpet their runway at the Golden Globes. 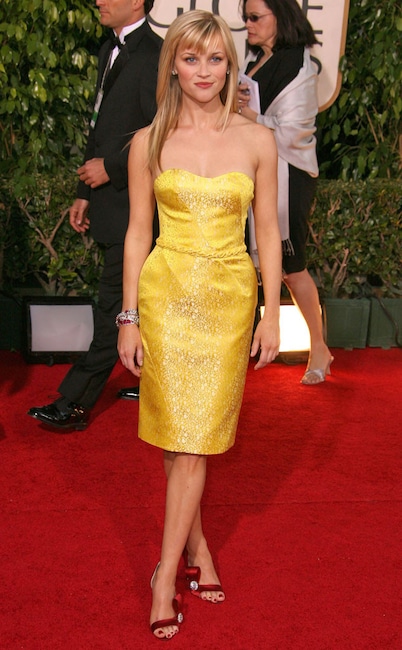 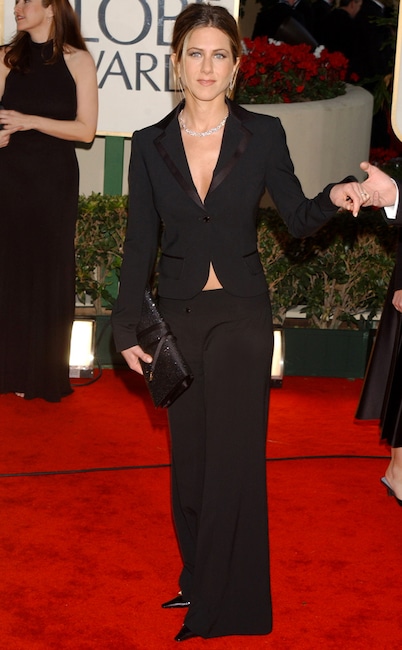 The Friends alum skips the usual ballgown and opts for something more sleek and chic: a black tux sans a shirt. 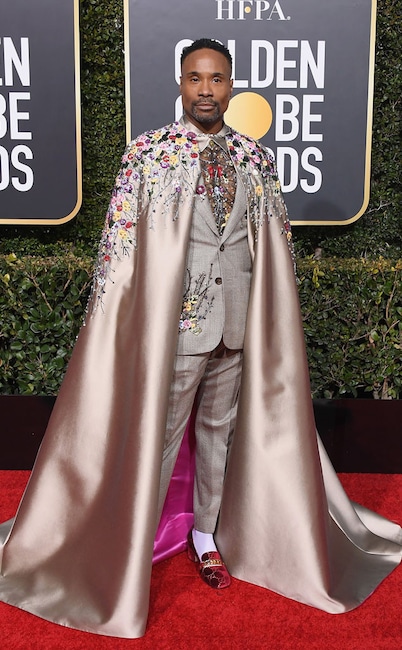 The Pose star never disappoints on the red carpet, and he certainly shows up and shows out at the 2019 affair wearing a vibrant embellished suit with an eye-catching cape. 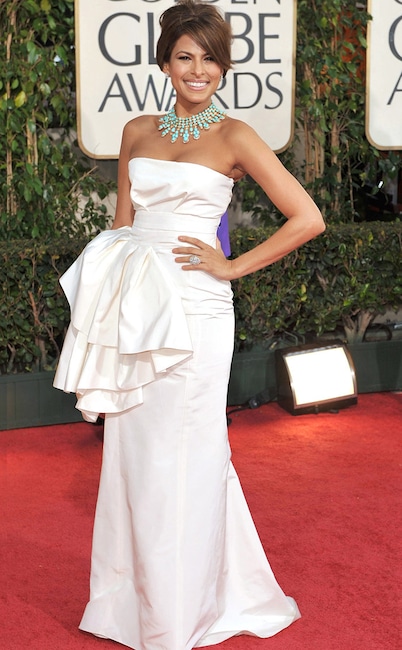 Mendes is a vision in white, as she dons an angelic Christian Dior dress at the 2009 affair. 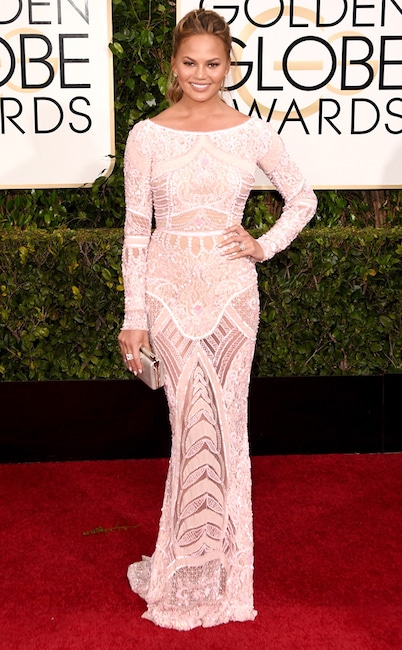 The supermodel dazzles on the red carpet in a beaded blush-colored gown by Zuhair Murad at the 2015 ceremony. 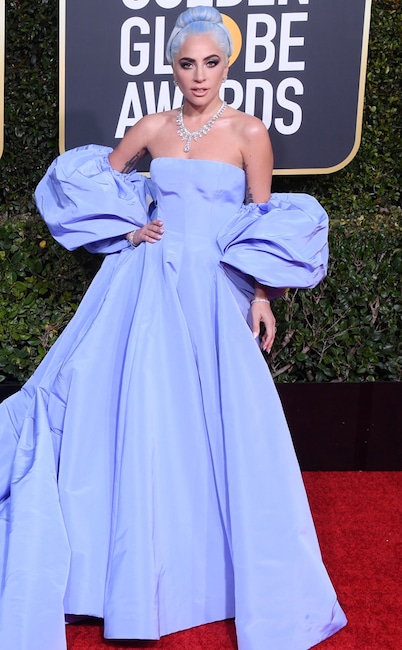 Royal blues! The pop star oozes with glamour at the 2019 ceremony in a periwinkle Valentino haute couture ballgown that pays tribute to Judy Garland in the 1954 version of A Star Is Born. 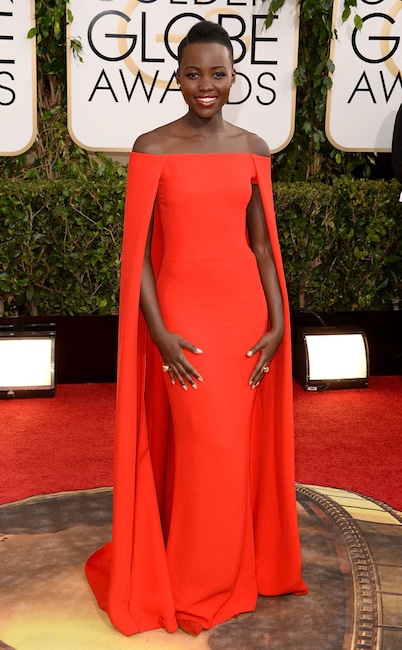 Lady in red! The Us actress makes a grand entrance at the 2014 awards show with her electrifying Ralph Lauren dress. 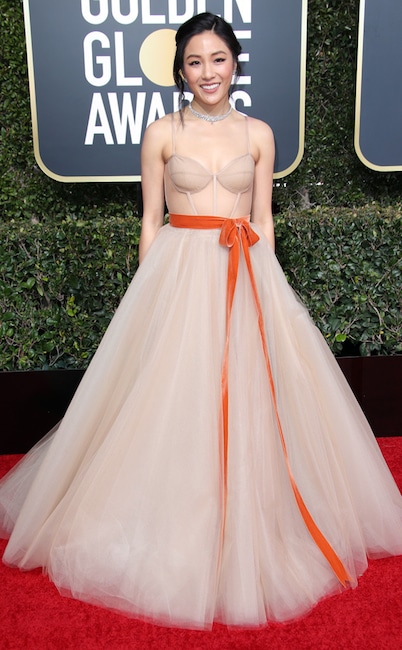 One word: wow. The Hustlers actress graces the red carpet in a princess-like ballgown that features a sheer corset bodice and massive tulle skirt. Her spicy orange velvet belt is a chef's kiss. 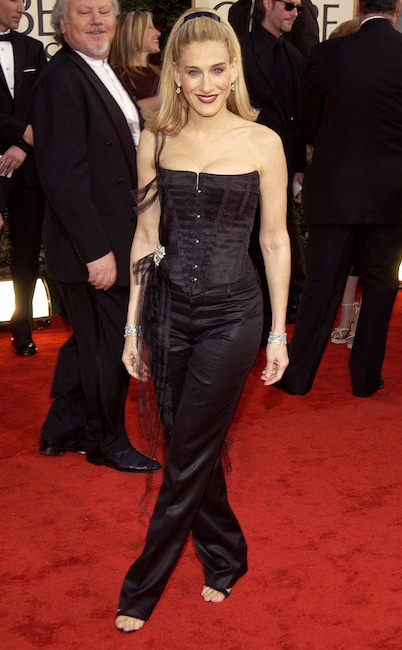 The 54-year-old star always slays the red carpet with her daring ensembles and her lewk for the 2003 ceremony was no different. 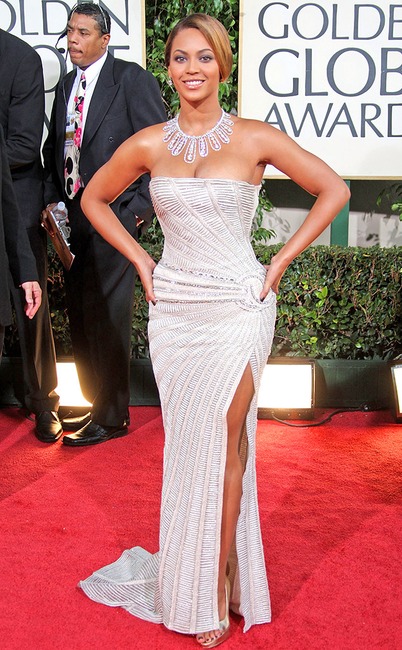 She's beauty and she's grace! The "Spirit" singer brings the glitz and the glam with a strapless beaded gown by Elie Saab at the 2009 fête. 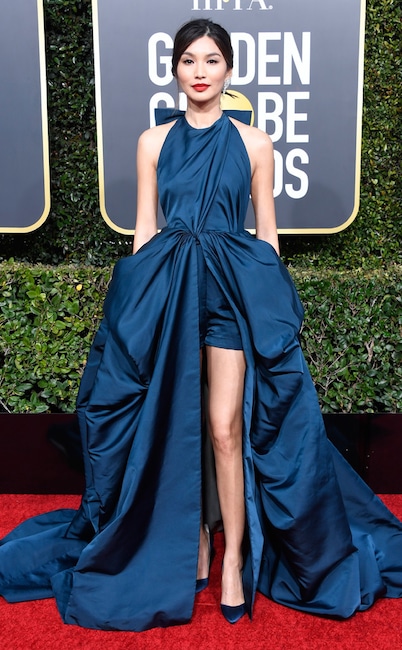 The Crazy Rich Asians actress goes for a high and low Valentino couture design at the 2019 awards show. From the vivacious navy blue color to the pockets, this dress is everything. 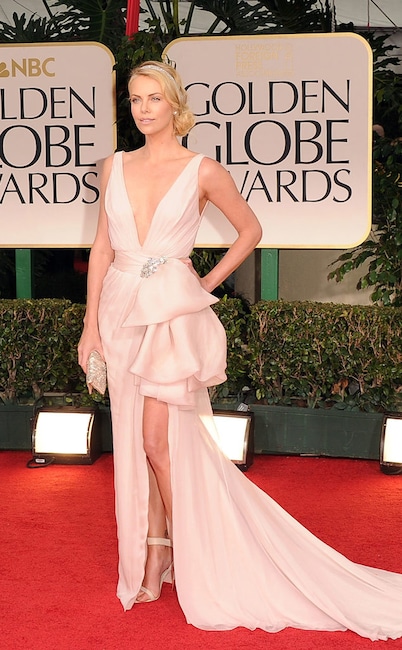 The Bombshell actress brings a fashion fantasy to the 2012 ceremony in a blush-colored Christian Dior couture number. 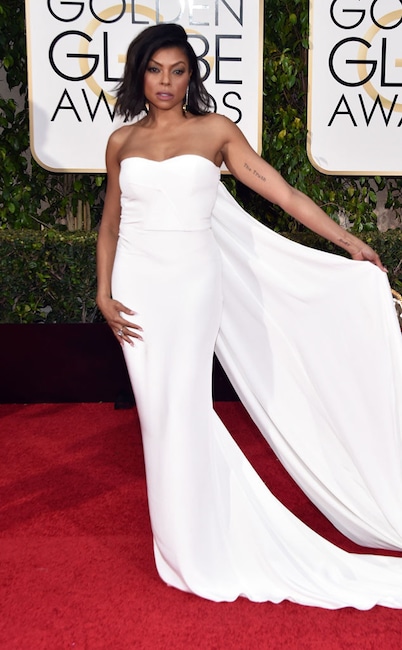 The Empire star serves bawdy and face at the special affair in a white-hot Stella McCartney design. The La La Land actress leaves her floor-length dresses at home and instead, stuns in a jumpsuit by Lanvin that features a chandelier-like bodice and oversized bow on the back. 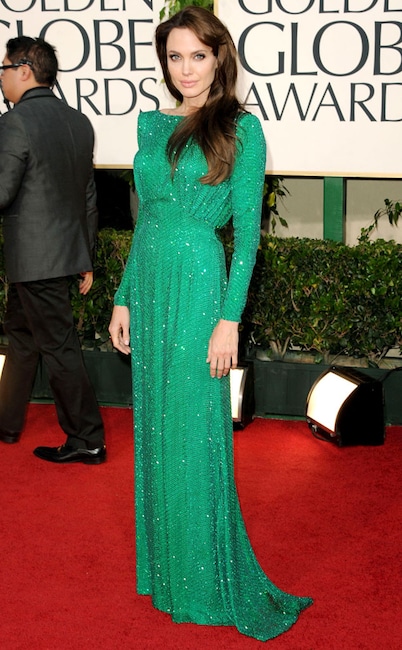 Angelina makes everyone green with envy, as she dazzles in a glimmering emerald gown by Atelier Versace at the 2011 awards show. 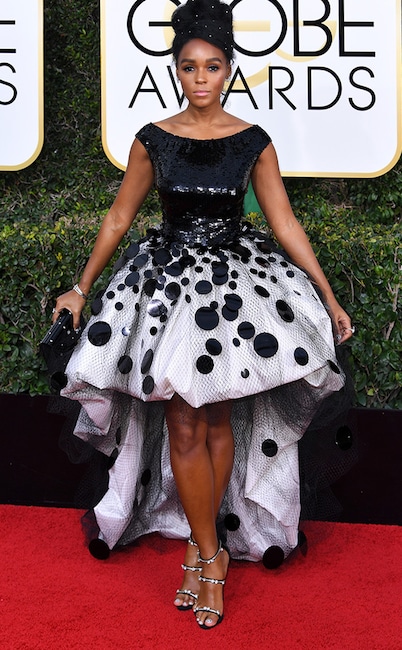 Spot on! The Dirty Computer songstress brings fun and flirty fashion to the 2017 ceremony with her eccentric design by Armani (which she helped create). 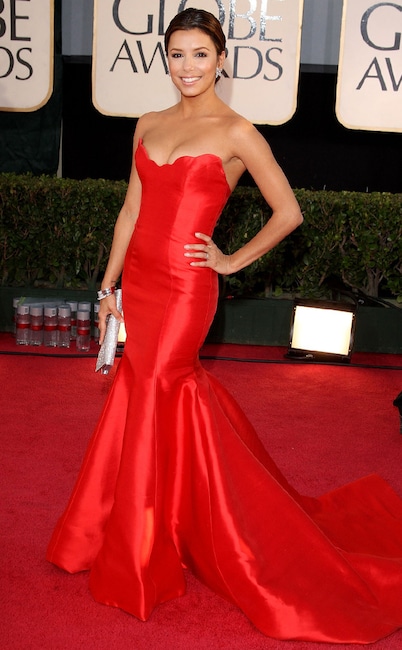 Longoria looks red hot, hot, hot in her Reem Acra strapless gown at the 2009 ceremony. From the design's body-hugging silhouette to the vibrant shade of crimson, the actress sets the red carpet ablaze. 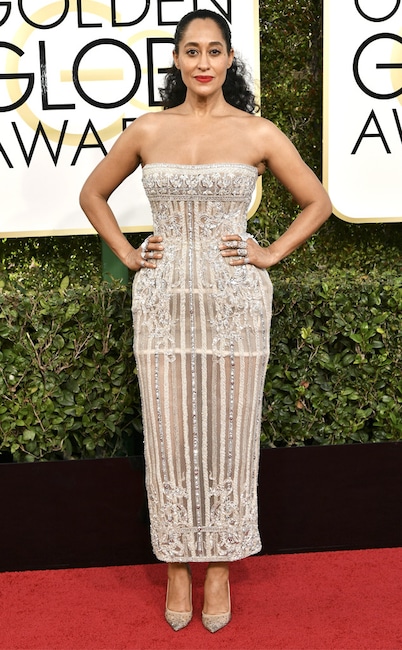 The 47-year-old star makes the red carpet her runway as she lights up the room in a sheer, sparkly cocktail dress by Zuhair Murad. 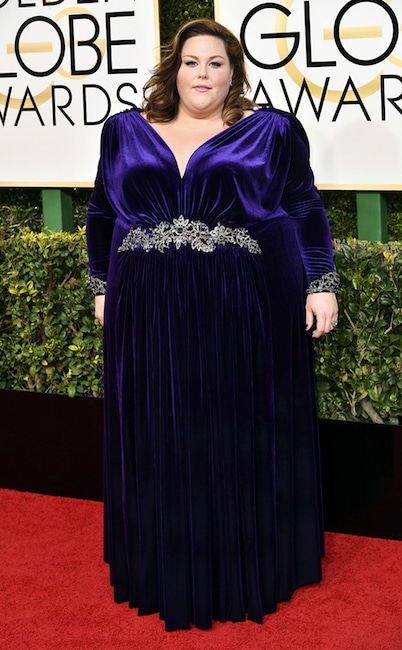 Metz adds a fresh pop of color to the red carpet with her majestic purple dress by Nathan Paul that features a plunging neckline, soft velvet material and jewel-adorned belt. 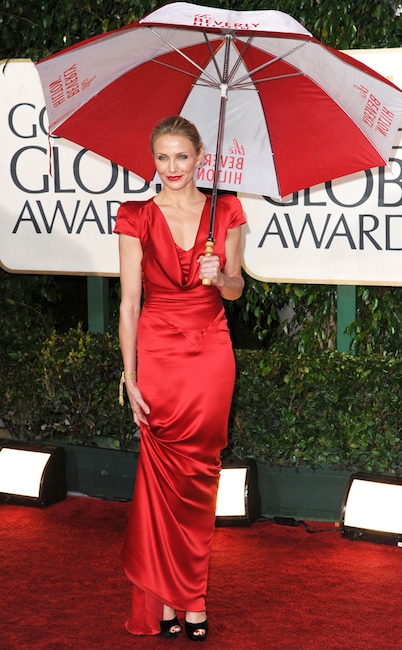 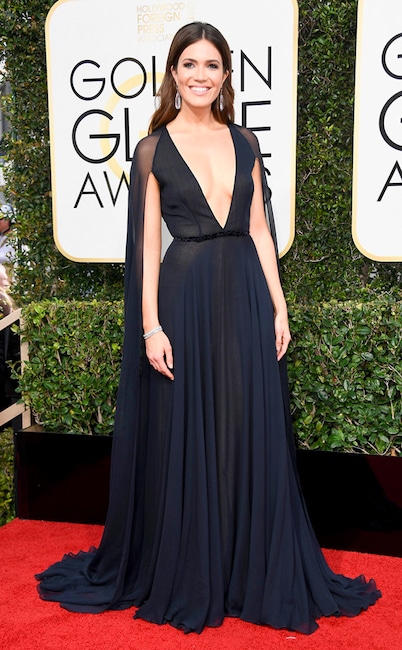 The This Is Us star brings a mix of modern and vintage vibes to the 2017 event with her bold, yet reserved caped gown by Naeem Khan. 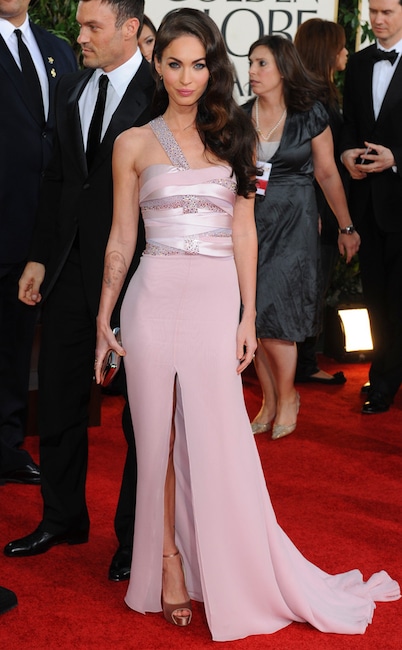 Pretty in pink! Megan looks effortlessly elegant at the 2011 Golden Globes with her soft pale pink design by Armani Privé. The one-shoulder strap and criss-cross details on the bodice make her dainty number anything but basic. 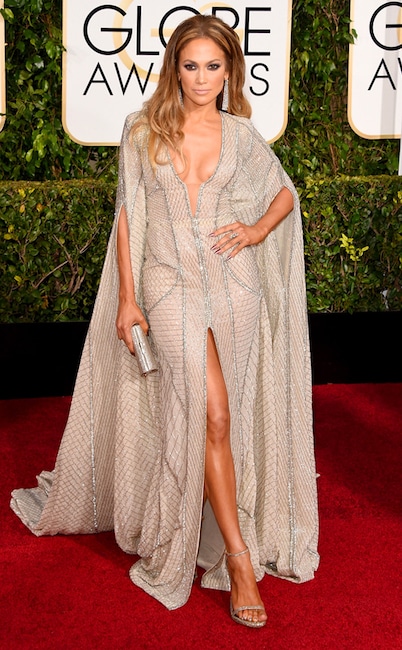 The Hustlers actress brings that legendary J.Lo glow to the 2015 event with her bedazzled Zuhair Murad caped gown. 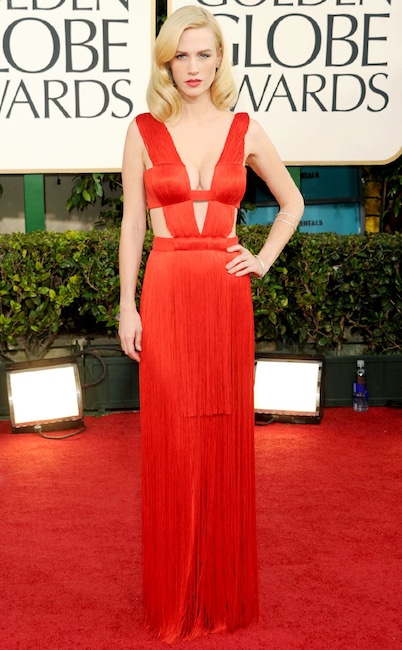 The Mad Men actress goes bold for the 2011 ceremony with her fiery red dress by Versace that has extreme cutouts and a fun fringe design. 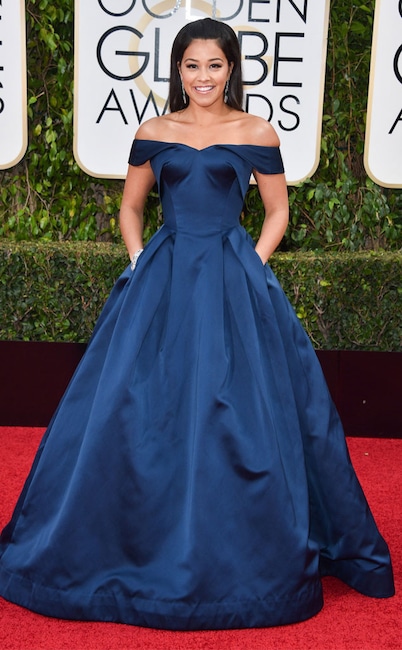 The Jane the Virgin star looks like a modern-day Cinderella with her navy blue princess ballgown by Zac Posen at the 2016 Golden Globes.