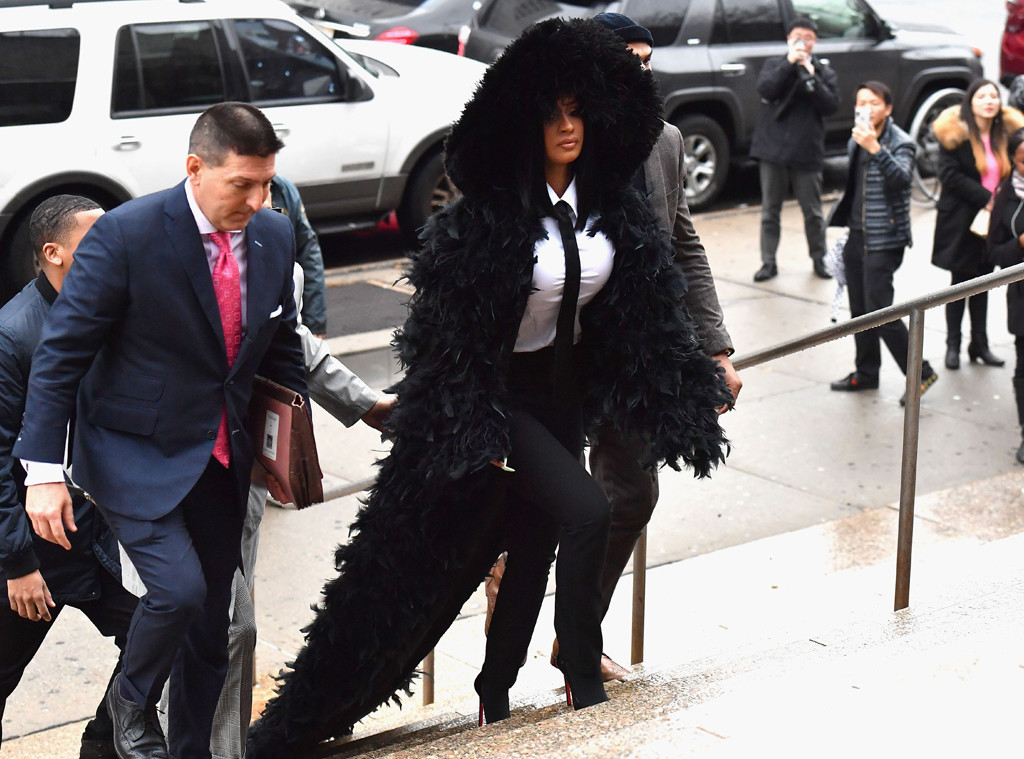 Cardi B had the right to remain silent...

Which is why she let her fashion do all the talking during a recent court appearance.

The "Press" rapper certainly made a dramatic entrance at the Queens Criminal Court on Tuesday afternoon when she showed up wearing a larger-than-life coat by Adrienne Landau that featured an explosion of feathers, a colossal train and towering hood.

And while her stylish piece was certainly a conversation starter, the 27-year-old star kept the rest of her ensemble simple, classic and chic. She paired her outerwear with a tailored white button-down, black pants, a matching tie and pumps.

Her glam was also on-point for her court appearance, especially since she rocked her signature long stiletto nails that were painted a light green. However, instead of wearing colorful makeup, she opted for a barely-there look. 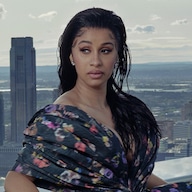 He told E! News, "What happened is that Judge Zayas adjourned the case until Jan. 17 to conduct pre-trial hearings relating to the other parties. He excused Cardi from coming to court since the hearings don't involve her."

The superstar's court appearance is most likely regarding her alleged altercation at a strip club in Queens last year. Just a few months ago, the Grammy winner was indicted on attempted assault in the second degree, however, she plead not guilty.

Additionally, defense attorney Nicholas Ramcharitar, who captured video of the 27-year-old rapper entering the building, told E! News, "As we were waiting for our client's criminal cases to be called, we were alerted by the Court officers that Cardi B would be entering the building for her case in Queens Criminal Court."

"Prior to that, we were able to speak with her attorney briefly, who told us that her case is being pushed hard by the Queens District Attorney's Office in regards to making an example of her," Nicholas continued. "The case may potentially proceed to trial if no realistic offer is made."

🚨Cardi🚨 Here at the Ramcharitar Law Firm, we believe everyone EVERYONE including @iamcardib deserves a proper defense! Too many times are people accused of committing “Crimes” without the proper evidence or justification. Just because someone is a Celebrity does not give any Law Enforcement Agency the right to treat them different than a regular non Public Figure. Go with the BEST in the GAME- This is your life, and we’re here to get it back to normal! 516-532-8393 24/7 365 days a year! #TheRamcharitarLawFirm #CriminalDefense

He pointed out that the "I Like It" rapper wasn't fazed by all the cameras and media surrounding her on Tuesday morning.

"Seemingly, Cardi was not upset at all the cameras and seemed quite eager to get in and out of the building as quickly as possible," he shared. "She was dressed in all-black with a black 'robe' with a train about 6-feet long made of black feathers."

Only Cardi B could enter a court room dressed to kill.