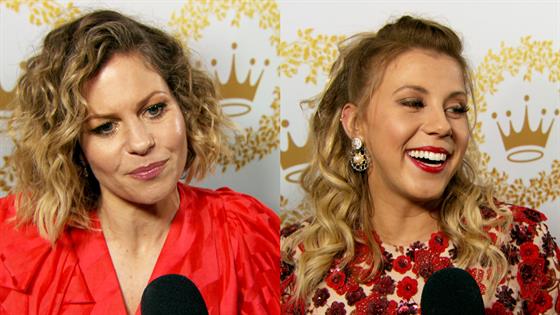 It's time to say goodbye to the Tanners...again.

After five seasons, Fuller House is ending its run on Netflix, with viewers once again saying goodbye to the beloved Tanner family. Guess we know what happened to predictability now?

The successful sequel series premiered in 2016 and centered on a grown-up and recently widowed DJ (Candace Cameron Bure) moving back into the old family home with her three children along with little sister Stephanie (Jodie Sweetin) and childhood BFF Kimmy Gibbler (Andrea Barber) by her side for support. Sound familiar?

After delivering shenanigans and sentimental storylines for a whole new generation, including the new cast members Michael Campion, Soni Nicole Bringa and Elias Harger, Fuller House's emotional fifth and final season dropped on Friday, Dec. 6. But did you know there wasn't almost a fifth season at all? In fact, the sequel series itself almost didn't even happen. 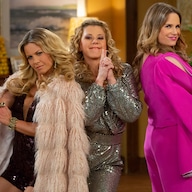 That's just one of the surprising secrets we're revealing in honor of Fuller House's ending (and you can check out a bunch of fun behind-the-scenes facts about the original series, too!), as well as details about a real-life injury that had to make its way on-screen, the shocking firing of an original member of the series and more...

So whatever you're currently doing: Cut. It. Out. And check out these 20 fun facts you might not know about Fuller House... 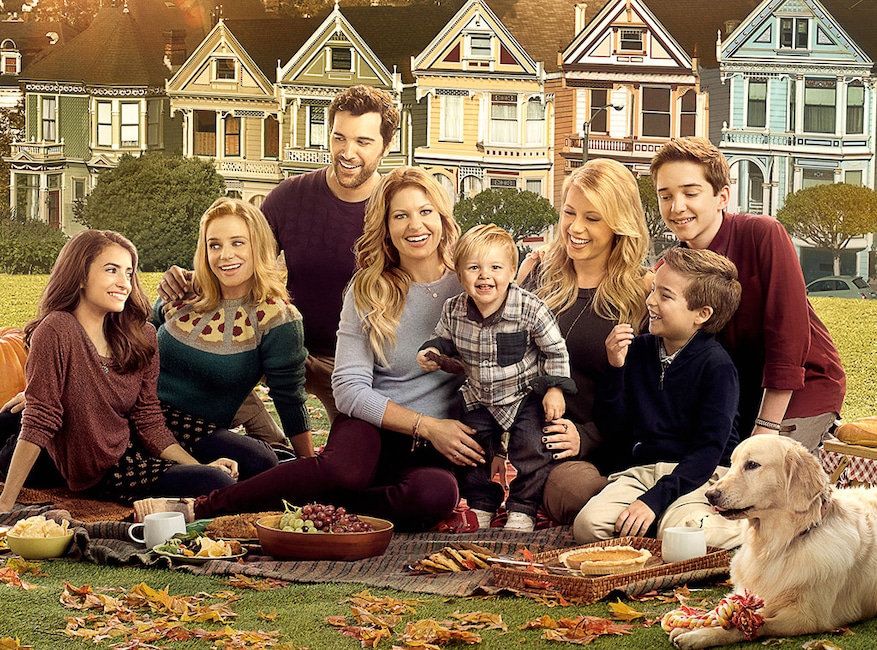 1. "We were trying to do some kind of spinoff" for "so many years" Stamos, who serves as a producer, said of the sequel series when he announced it was happening on Jimmy Kimmel Live! in 2015. Stamos later revealed on Instagram that "every single network and streamer" said no to the idea before Netflix decided to reboot it.

2. While anticipation was extremely high for the sequel series, the reviews were less than kind. Not that the cast cared, with Cameron Bure telling E! News, "The critics never had a good thing to say about Full House and yet it ran for eight years in primetime and then it's never been off the air in 30 years. So it's a testament to what the fans want and not what the critics think. If there are any negative review that's how we feel about it with Fuller House; we did this for the fans and we think they're going to absolutely love it."

3. And love it they did, with IndieWire reporting that Fuller House was likely the most-watched TV show in 2016, according to data from Symphony Advanced Media. Despite Netflix being known for never releasing ratings info, Symphony's finding suggested FH drew a whopping 14.4 million viewers between the ages of 18 and 49 within 35 days of its series premiere, with an impressive 10.4 demo rating. Those numbers (if accurate) outperformed The Walking Dead, then TV's highest rated show. 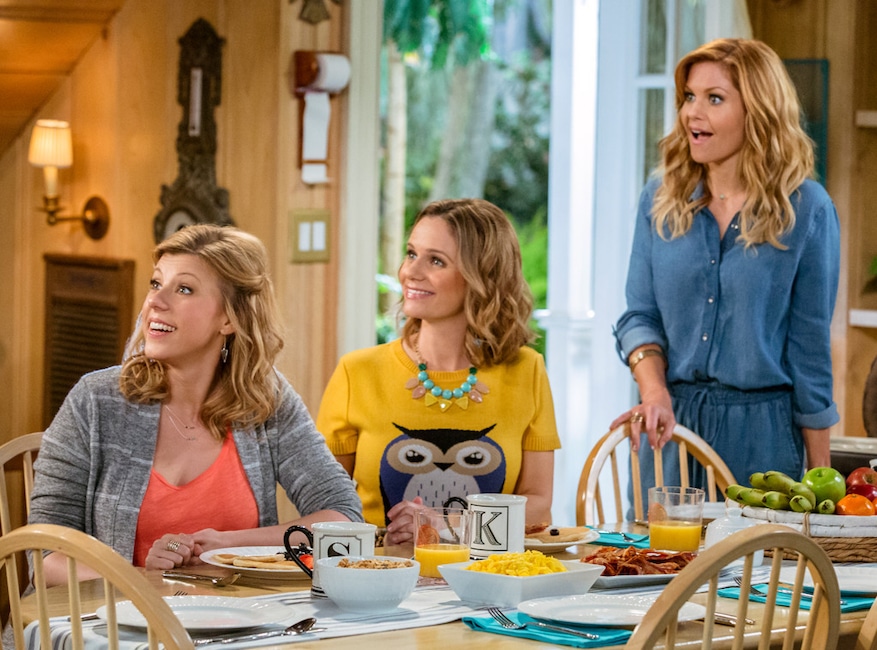 4. Despite leaving the acting world after the original series ended in 1995, going on to work in academia, Barber had no hesitations about reprising the role of Kimmy Gibbler as one of the new show' three leads.

5. While they ultimately settled on making grown-up Kimmy a party planner, there were several other ideas, including maybe she is a translator for the United Nations and she speaks like four different languages," or Kimmy "having a snack-making business at home, like Gibbler's Nibblers. She ran her own cookie business out of the basement of the home," Barber revealed to THR. 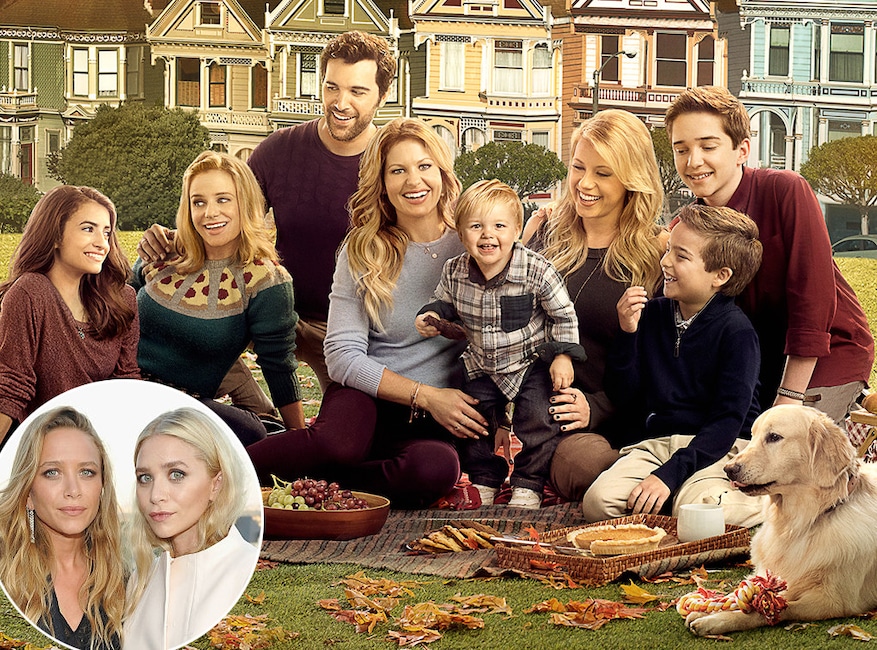 6. Producers initially envisioned the Olsen twins reprising their role as Michelle, but Mary-Kate and Ashley Olsen, who have since retired from acting but are still uber-famous, declined the opportunity, leading to endless headlines and in-jokes throughout the series' run.  "Although Ashley and Mary-Kate will not be a part of Fuller House, I know how much Full House has meant to them, and they are still very much considered family, "Boyett said at the time. "It has been exciting to see how they have built their professional careers, and I support their choice to focus on their fashion brands and various business endeavors. I appreciate their support and good wishes towards Fuller House."

7. Despite speculation, Elizabeth Olsen, Mary-Kate and Ashley's little sister, was never officially offered the chance to take over the role in a winking guest appearance. "If I did, I'm pretty sure no one on my team heard it," she told us. "I don't know where that started." (It started with the show's boss BTW.) 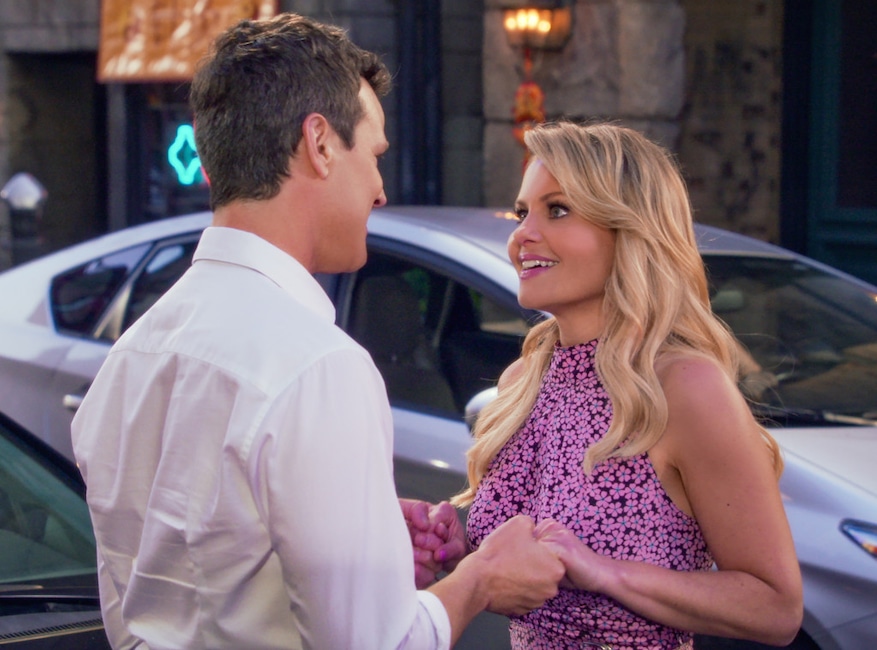 8. While he was only a guest in season one, Weinger was promoted to a series regular in season two, with Steve and DJ ultimately getting back together in season three, something the writers had been wanting to fix since the original series broke them up. "The fact that the producers chose to break them up, and the storylines that followed, were not big crowd-pleasers. That always bothered me," Franklin, who left the original series after season five said. "So I looked at this show as an opportunity to let Steve and D.J. get back together someday and have a chance and see what happens

9. Fun fact for the DJ and Steve shippers: Cameron Bure and Weinger actually went on a date IRL back when they were teens when he asked her to go to the Aladdin premiere with him (He voiced Aladdin BTW!)...she doesn't didn't realize it was a date. "I had no idea...and I remember kind of thinking, 'Scott and I are just friends and he invited me to the premiere. But is this a date or is it not?'" she told TooFab. (For the record: they both agree now it was SO a date.)

10. In season three, Sweetin's real-life injury had to be incorporated into the show after she broke her ankle and tibia in multiple places climbing over a fence to retrieve her son's toys. "They have to write it in," Cameron Bure told E! News about the injury. "It's going to be written in." Sweetin added, "There's no hiding that I can't walk and I can only be a houseplant in so many episodes where I'm just stuck somewhere." 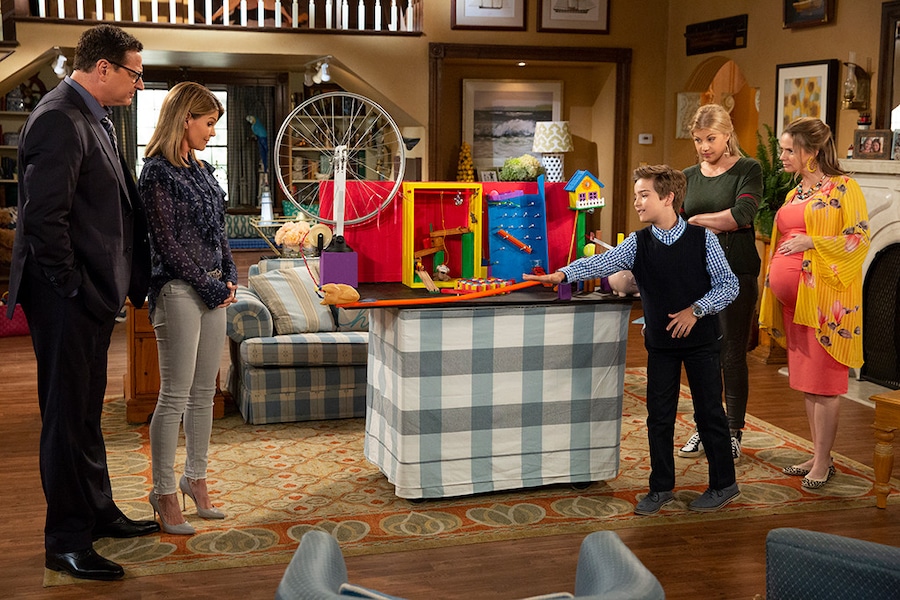 11. The Netflix series had to completely recreate the Tanner house on the Warner Bros. lot, which should've been easy...except all of the original drawings of the set had been discarded.  "I can't tell you how many episodes," production designer Jerry Dunn told EW of having to watch hundreds of hours of the original show. "I mean, just a ton."

12. One essential prop that hadn't been lost? The living room couch, with the checkered love seat still serving as the room's central piece all these years later. "The set decorator and I were just blown away," Dunn said of finding the original pieces. "They were in good enough condition that we're using them still."

13. In 2016, Franklin bought the San Francisco house used for the Tanner house exterior shots (after the previous homeowners refused to let it be filmed for the Netflix series) for just over $4 million. He planned to renovate and use it for filming, in addition to possibly renting it out or starting a museum for fans to visit. However, he put the house up for sale earlier this year for $6 million. 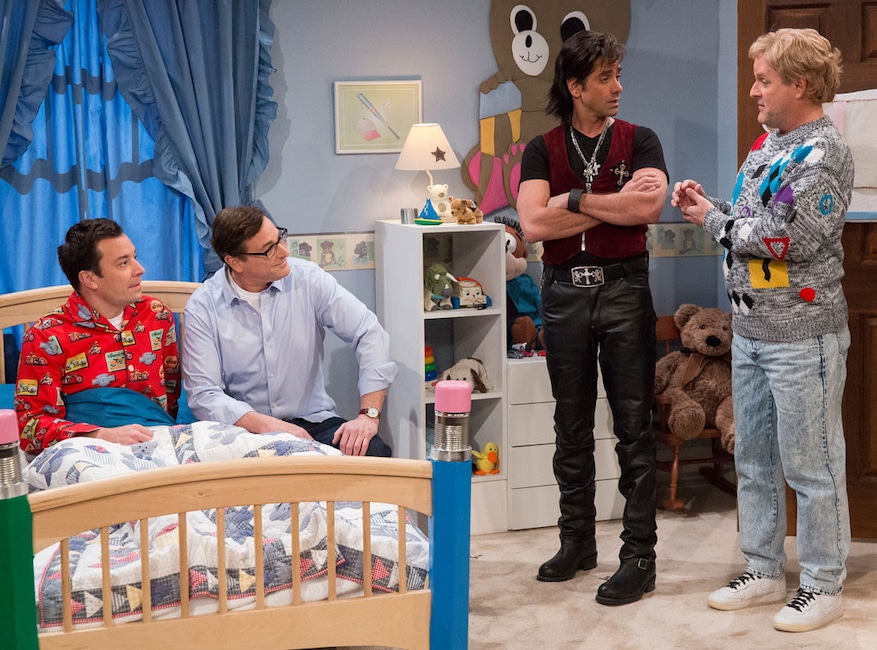 14. Mr. Woodchuck, Joey's chipmunk puppet, made a return in the revival, but it wasn't actually the original prop. "I kept the original Mr. Woodchuck. And then my dog Ranger ate his face," Coulier revealed during a Reddit AMA. And the new version came from none other than Jimmy Fallon, who had it recreated for a reunion sketch in 2014.

15. After original actor Jason Marsden decline to make an appearance in season two, Queer as Folk star Hal Sparks took over the role of Nelson, DJ's ex-boyfriend. While Marsden didn't reveal why he decided not to return, he wrote on twitter that the producers tried "their darnedest" to get him to do so. He did have one request: #KeepNelsonShort.

16. 30 years after last appearing in a project together, Cameron Bure's older brother Kirk Cameron, known for his hit sitcom Growing Pains, made a guest appearance in the fifth and final season (he appeared in one episode of the original series' run as DJ's cousin). Calling her brother's cameo a "really fun surprise," Cameron Bure told Closer Weekly, "It's a little bit of, like, a '90s episode, so Lisa Loeb is in it as well as my brother Kirk...that week I was directing as well...it was a dream come true to direct my brother." 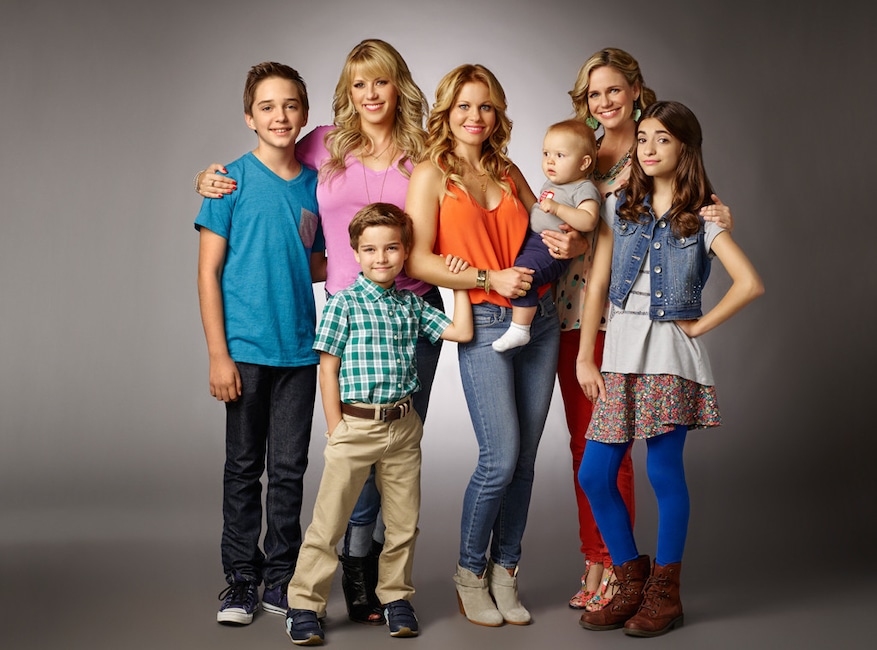 17. Like Michelle Tanner on the OG series, the role of DJ's infant son Tommy is played by twins Fox and Dashiell Messitt. And like their predecessors, the boys were experiencing all kinds of firsts on the Netflix hit's set. "When they started at 7 months old, they didn't even know how to crawl. And in the process of doing the show they started crawling and started walking," their mom Kacy Andrews told EW. "So a lot of milestones while they were working."

18. As the ongoing college bribery scandal continues to play out and Loughlin awaits trial, Aunt Becky will not appear in Fuller House's final season. Still, the Fuller House family was sticking by their co-star. "Where there's a lot of heart, there's a lot of love—and a loving family sticks together no matter what," said Cameron Bure while accepting an award with the cast at the 2019 Kids' Choice Awards. "They stick together through the hard times, they support each other, they encourage one another, they pray for each other, and they stand by their side no matter how tough it gets." 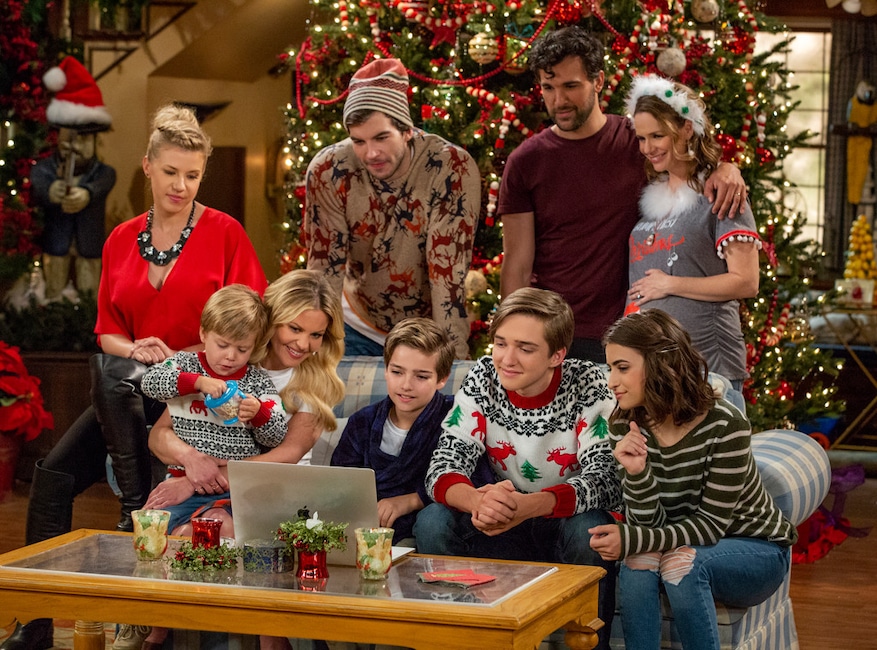 19. In 2018, Franklin was abruptly let go from the series after the studio received complaints about his behavior in the writer's room and on set, Variety reported at the time. Per the outlet's sources, he'd been accused of being verbally abusive to staffers and making inappropriate statements in the writers' room, including sexually charged comments about his personal relationships and sex life.

20. Despite reportedly being one of the streaming giant's highest rated shows, Netflix made the decision to end the series after five seasons. At the time, a source told E! News the cast and crew were excited to receive that final season order because they were close to being canceled altogether. For Netflix and the pacing of the show, five seasons is a perfect run, the source added.