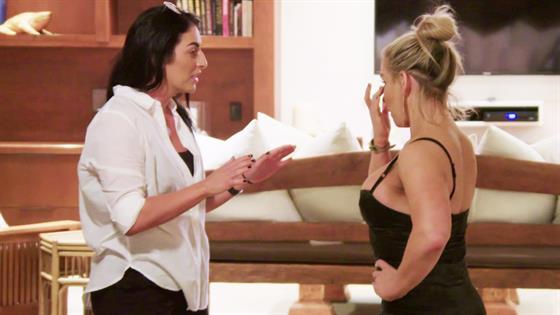 Celebratory vacations should look a lot more fun than this does.

Tuesday's new Total Divas followed our favorite WWE superstars all the way to Maui, where Nattie Neidhart had arranged for a destination girls' trip that turned out to be chock-full of unexpected guests. After touching down on the island to realize Sonya Deville was the only invitee who'd brought a significant other, the group—which included Carmella and Riott Squad wrestler Liv Morgan, in addition to Nattie, Sonya and Sonya's girlfriend Arianna—was met with an even bigger OMG moment upon arriving to their exceedingly picturesque vacation home.

"Surprise!" Nikki Bella and Brie Bella called out from a gazebo on the villa's back patio. Though the twins and veteran Divas stars had previously declined (wink-wink) Nattie's invitation, the pair went ahead and surreptitiously made the trip anyway.

Jim "The Anvil" Neidhart's daughter was comparably shocked by both events, but it was Deville's plus one whose presence stirred up trouble in paradise through absolutely no fault of her own.

"When people bring their loved ones or whoever they're seeing, it makes the trip different," noted Brie once the vacation was in full swing. Nattie, who'd been butting heads with Sonya on the down-low for the duration of their getaway up until then, agreed Deville was behaving differently than usual.

"To me, this was supposed to be a girls' vacation," Neidhart told the camera—having assumed previously that Sonya understood "girls' trip" didn't mean "bring your girlfriend"—before going on to reference an uncomfortable confrontation between her and Deville earlier that day. "If you're gonna act insecure and weird [in front of Arianna], then don't bring your girlfriend."

Whether their initial conversation, or the follow-up spat that came later, did in fact breed insecurity on Sonya's part remains sort of unclear. With Ronda Rousey leaving the WWE to start a family with husband Travis Browne, the Divas were exchanging thoughts on next steps for the wrestling organization. "I just want to see people get some opportunities," Neidhart continued without addressing Deville, who was seated across from her at the time. "And I hope that's gonna happen this year."

"In everybody's eyes I'm not a potential champ right now, and that makes me upset," Sonya admitted during a private conversation with Arianna soon after. "What am I doing wrong? I just feel like I'm falling short and I'm just frustrated about everything and I'm just overwhelmed and freaking out."

But when Deville later pulled Nattie aside to air her grievances, the third-generation pro wrestler wasn't particularly receptive.

After insisting her co-worker was "overthinking" and "acting ridiculous" about the championship musings, Nattie segued into some present complaints of her own. "This whole entire trip you've been acting so strange because you don't want to look weird around your girlfriend," she accused, reiterating that they were supposed to be enjoying this girls' trip and Sonya was "acting so different."

"If you're gonna come here and be a party pooper, nobody wants it," Nattie finished.

For a minute there, it really did seem like Sonya was ready to leave early. But the next morning, she and Arianna were still in Maui. One half of the couple even went on to attend a surf lesson with Nattie and Liv and—final surprise of the evening—it wasn't Sonya.

Watch Deville and Neidhart's tense exchange play out in the full recap video above. Also, you can watch the full episode HERE!