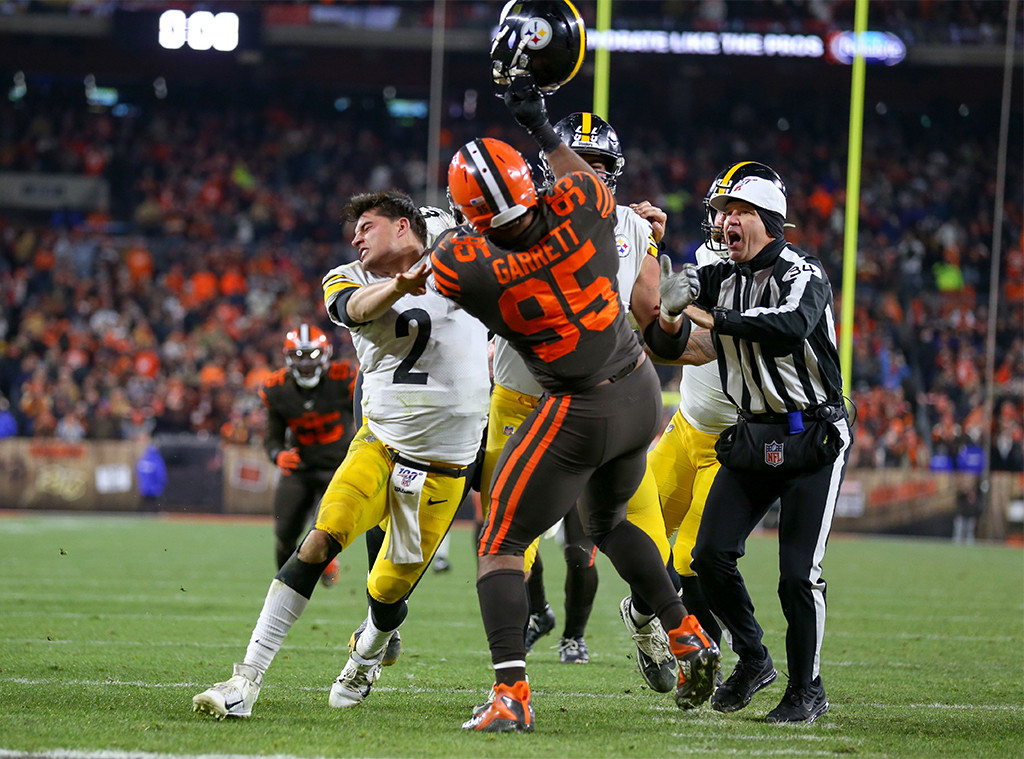 The news came less than 24 hours after the player ripped the helmet off Pittsburgh Steelers quarterback Mason Rudolph and hit him on the head with it during an altercation at the end of Thursday night's game.

"Garrett has been suspended without pay indefinitely—at a minimum for the remainder of the regular season and postseason—and must meet with the commissioner's office prior to a decision on his reinstatement. He was also fined an additional amount," a statement from NFL senior VP of communications Michael Signora read, noting that each franchise was also fined $250,000. "Garrett violated unnecessary roughness and unsportsmanlike conduct rules, as well as fighting, removing the helmet of an opponent and using the helmet as a weapon."

Garrett also apologized for his actions in a statement.

"Last night, I made a terrible mistake," he stated. "I lost my cool and what I did was selfish and unacceptable. I know that we are all responsible for our actions and I can only prove my true character through my actions moving forward. I want to apologize to Mason Rudolph, my teammates, our entire organization, our fans and to the NFL. I know I have to be accountable for what happened, learn from my mistake and I fully intend to do so."

Which Hollywood & Football Couple Knows Each Other Best?

In addition, Garrett's teammate, Larry Ogunjobi, was suspended without pay for one game and fined "an additional amount" for "unnecessary roughness, specifically for shoving an opposing player to the ground during an altercation." Steelers center Maurkice Pouncey was also suspended without pay for three games and fined "an additional amount for fighting, including punching and kicking an opponent." According to NFL.com, citing NFL Network Insider Ian Rapoport's sources, both Ogunjobi and Pouncey, are expected to appeal these punishments. The suspensions may be appealed within three business days.

However, these three might not be the only ones facing disciplinary action.

"Additional discipline for other players will be forthcoming through the standard accountability process, including those players that left the bench to enter the fight area," the statement continued. According to ESPN, Garrett's suspension is the longest one in NFL history for a single on-field incident. Browns owners Dee and Jimmy Haslam apologized for the incident in a statement on Friday.

"We are extremely disappointed in what transpired last evening at the end of our game," they said, per NFL.com. "There is no place for that in football and that is not reflective of the core values we strive for as an organization. We sincerely apologize to Mason Rudolph and the Pittsburgh Steelers. Myles Garrett has been a good teammate and member of our organization and community for the last three years but his actions last night were completely unacceptable. We understand the consequences from the league for his actions."

"As an organization, we are disappointed with what occurred last night near the end of our game against the Cleveland Browns," he stated, per the outlet. "The actions of the players involved were not something that should be part of any football game. Our players, coaches and everyone in the Steelers organization understand that we must always maintain composure, no matter what happens. After a hard-fought game between two rivals, it is a shame that the game ended that way."