Aaron Carter has vowed to "sue the s--t" out of the animal rights group PETA after it criticized his mother, Jane Carter, for allegedly slapping one of their dogs, which she denies.

On Wednesday night, hours before he was hospitalized briefly for exhaustion in his native Florida for exhaustion, the pop star posted an Instagram Live video of him and his mom driving at night through the state, along with seven pugs, including puppies. At one point, Jane appears to strike one of the pets who inches towards her from the backseat.

"Dogs are family – not for IG likes," the animal rights group continued. "SLAPPING them or SELLING THEM for a profit when millions are homeless in shelters is cruelty."

"PETA, hi PETA. You're gonna f--kin', you're gonna after my mom? You're go after my mom, PETA?" Aaron said on Instagram Live on Thursday, speaking to a fan via splitscreen.

Jane said in another Periscope video he posted, "Yes, I said, 'Get back' but I did not smack my dog. I would never smack my dog. My dogs love me."

"Do these look like dogs who are abused or unhappy? Do you think that if you're driving 75 miles an hour and you have puppies that are jumping up and up because we were eating food-" Aaron said on Instagram Live.

"And we don't believe in locking them all up all the time," Jane added.

Aaron and Jane accused PETA of editing a "smacking" sound effect into the video.

"They think it's animal abuse when we're disciplining," Aaron said. "I went to school for five years for dog training."

He also noted that he likes to rescue dogs from puppy mills and find them homes.

Dogs are family – not for IG likes. SLAPPING them or SELLING THEM for a profit when millions are homeless in shelters is cruelty. pic.twitter.com/wg0x2sR2Fe

"This is one of the first times that seven of these [pugs] have ever been in a car," he said. "We're eating food in the front and they're trying to jump up and while we're driving...my mom was on the passenger side and I kept telling her, 'Mom, push the dog back because they're gonna push the gear shaft into 'drive' and they're gonna cause us an accident...they got put in their place, they got [reprimanded] and now look at them. They're all just beautifully sleeping, chilling."

"I'm gonna sue the s--t out of PETA," Aaron said. "I'm gonna take them for millions of dollars, and then I'm gonna give back money to a community that actually does help animals." 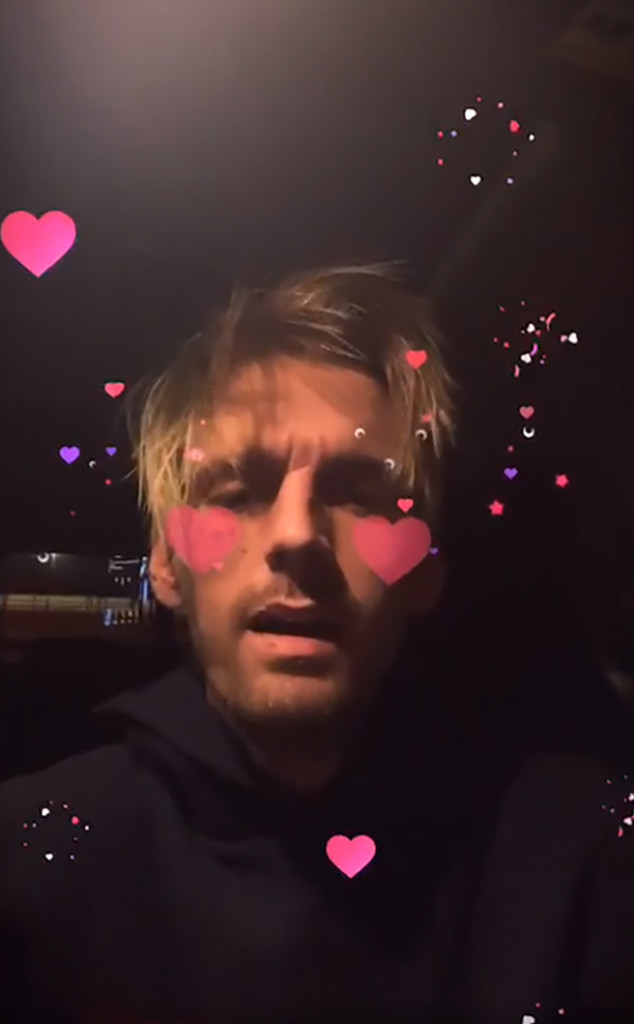 "You know I don't smack the dogs," Jane said.

Aaron later tweeted on Friday, "You don't realize how powerful I am. And everyone is going down."

The incident and Aaron's hospitalization comes as he continues to struggle with health and personal issues that have raised concern among his fans, as well as feuds with his brother Nick Carter and twin sister Angel Carter.

"My mom took care of me. I almost ended up in the intensive care unit today and I'm gonna be OK," Aaron said on Instagram Live on Thursday.

He then opened up about his struggles.

"You know what I've done bro in the last two years? I've saved my mom's life twice. I've been to rehab three times and I offered my sister help yesterday," he said.

In September, Aaron, who has battled substance abuse in the past, revealed in a TV interview that he suffers from multiple personality disorder, schizophrenia, anxiety and manic depression. He also accused his late sister Leslie Carter of sexual abuse, and claimed Nick abused him his "whole life." They have not responded publicly to his accusations. Nick obtained a restraining order against Aaron, claiming his brother told him he "harbors thoughts and intentions" of killing his then-pregnant wife and unborn second child.