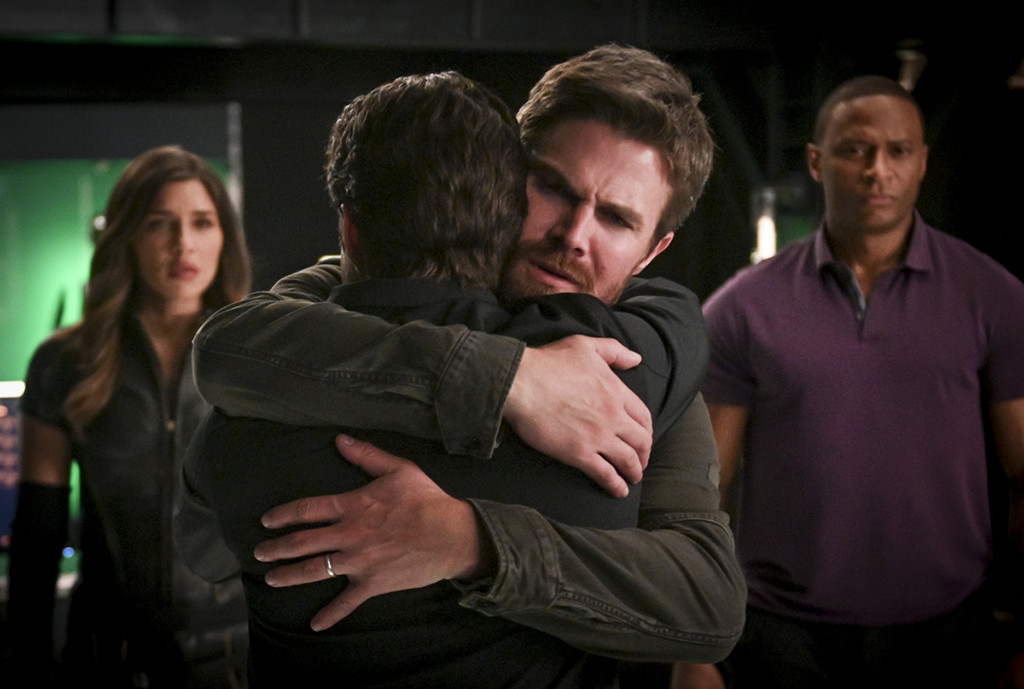 Are we all doing OK?

Arrow just gave us what might be one of its best episodes and most anticipated episodes ever, finally converging the future storyline with present day, and reuniting three fourths of a seriously tortured family. It was wonderful, filled with typical Arrow fights and explosions and arrows, but also with emotions we didn't even know Oliver Queen was capable of.

There was a lot of stuff to deal with, like the return of the Deathstrokes and the impending Crisis, but there was plenty of time for family bonding, including a heartbreaking scene with William and several attempts to get Mia to open up in any way.

We talked to Ben Lewis about what it was like to shoot such a momentous episode, and how that "coming out" scene came together.

E! News: Did this feel different to shoot than other episodes?

Lewis: Yes. Kat [McNamara] and I talked a number of times while we were shooting it just like, how drained we were. It was emotionally very draining. Luckily I felt like when I watched it, it wasn't as draining to watch as it was to shoot. It's obviously a very moving episode, but I think it's still very entertaining and fast-paced in the way Arrow does so well. But definitely to shoot it, there was just like a lot more...as you can see when you watch it, the amount of emotional scenes, it's sort of non-stop. 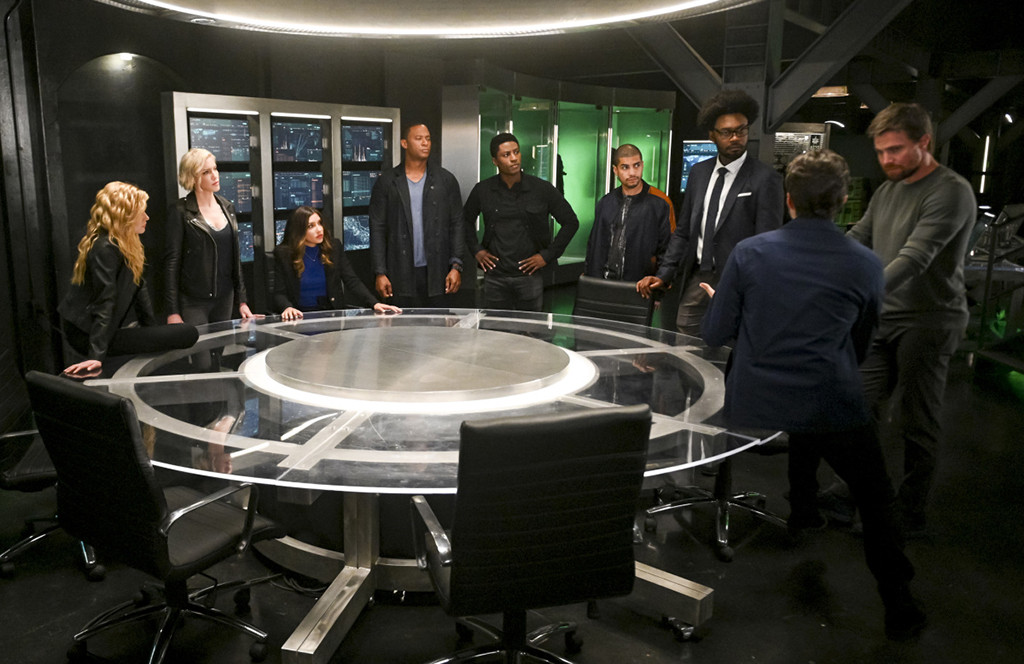 I want to talk specifically about the scene with Oliver where William comes out to him, because that look on his face when he realized you never got to come out to him before was just heartbreaking. What was that like to get into that place together?

It was surprising to me just how deep it got so quickly. We were just sort of immediately dropped into it, which was surprising because we never really discussed it beforehand. But it was a scene that was really important to me. It was a scene that actually I sort of...when I read the ending of 803, where obviously Mia and William were reunited with Oliver, I immediately had the realization that William probably never got the chance to come out to Oliver before he died. So I emailed [showrunner Beth Schwartz], and I said look, I just realized this is something that William never got a chance to say to him, which is really the most important thing for him to have the opportunity to do that, because it's such a formative experience for every LGBTQ person, to be able to just stand in front of your parent or parents and just like speak your authentic truth and let them know who you really are. 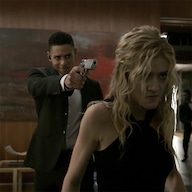 So the idea that William was sort of robbed of that chance to do that really broke my heart. Luckily Beth totally understood that and felt like it was an important scene that had to be in the episode. So I obviously went into it, you know, I asked for the scene to be in there, so I had high expectations for it and I wanted it to deliver, but I didn't necessarily think or know that it would mean as much to [Stephen Amell] as it meant to me, and it was clear to me that it did. I think him as a father, and also as an LGBTQ ally...we never really talked about the specifics of why it meant so much to him, but it was clear to me that it did. 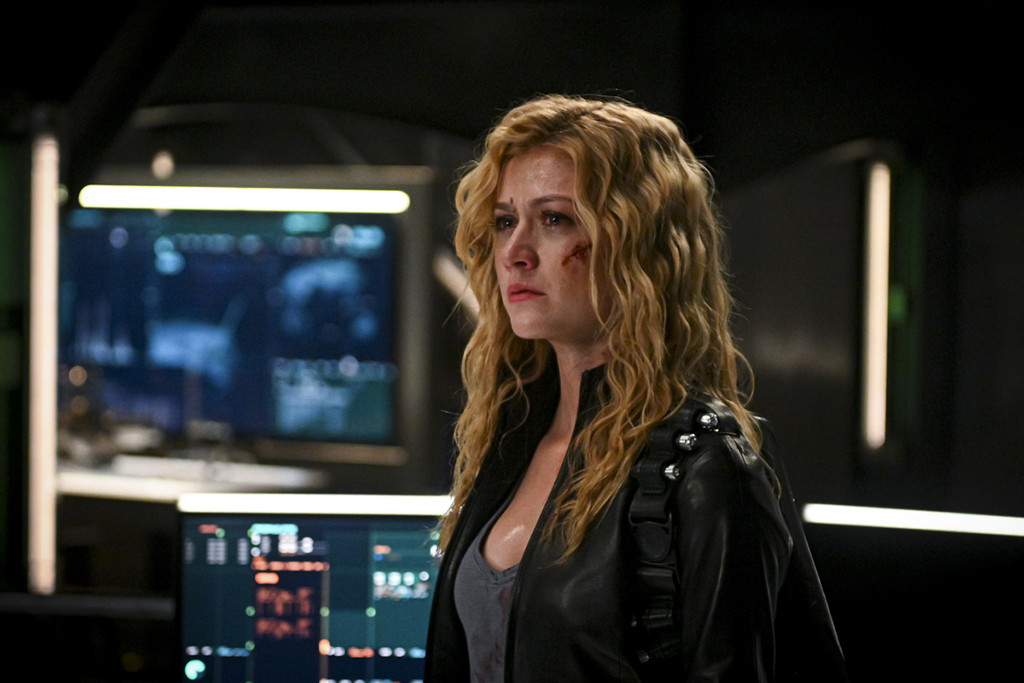 To me the best parts of the show have always been the emotional family stuff, and you had a lot of that to do in this episode. What was it like getting into that family dynamic with Stephen and Kat?

It was interesting to me because I had only met Stephen in passing like a couple times before we started this episode, because we were just never in the same timeline together. So we only had a couple of sort of like brief conversations, which I think sort of helped for this episode in a way. Because obviously I've watched the show an dI have an understanding of who this character is and what Oliver's relationship is to his family, but specifically to Wiiliam, but I didn't really know Stephen that well before we traveled back in time.

So that sort of like getting to know you or re-know you aspect of it was very real for Kat and I. We were sort of like building a trust and sort of a chemistry and working relationship with Stephen and like as these characters were also trying to build or rebuild their family dynamics. And you know, like you see in the episode, it goes really deep. It goes really emotional so quickly that we just sort of had to like hold hands and like jump into the deep end together, which I think was really a bonding experience both for us as actors and also as the characters. 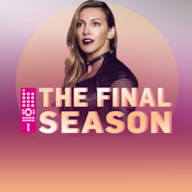 The Final Season: Katie Cassidy Remembers the First Time She Put on Her Arrow Costume

At first it seemed like the future kids weren't going to reveal anything, but by the end they had revealed a whole bunch of things about the future. What does that mean for Team Arrow going forward, that they now know all this stuff?

Well obviously it means that they have this knowledge about the downfall of Star City, and particularly I think for Rene to find out that his daughter was murdered by Diggle's son, JJ, I think for the two of them it lights a fire to change the course of the future to protect their children. And for Oliver, he just found out that his kids didn't grow up together, and as I say in that scene, I never really saw Felicity again, and neither of us ever saw him again. So i think for those OTA members to sort of see what the consequences of the future are going to be for their children is a huge motivation for all of them.

We last saw Oliver and his kids bonding over grilled cheeses, but what can you say about what they're going to do next?

I can't say anything specifically about what they do, but I think it's safe to say that the next couple of episodes, there are missions as there always are on any given episode of Arrow, but the difference now is OTA and FTA sort of have to work together and in the process, everybody is sort of getting to...it's a really sort of extreme way to get to know or reconnect with your family. But it's really bonding, and beautiful I think too, at least for Oliver to sort of see, for better or for worse, to see how much Mia takes after him. And because of that, he's able to sort of give her really sound advice to keep her from making some of the mistakes that he's made. He doesn't want the same sort of fate for her.

And also for him to see that William grew up and took after Felicity in all the ways he did, and that he's able to use what he learned from Felicity to really contribute to the team in a real way as well. It's obviously hard to allow your kids to put themselves in danger, but I think he also can't fault them because their reasons for wanting to be heroes and save the city are the same reason, the same motivation as he has. So it's sort of hypocritical for him to stand in the way of their destiny.

Arrow continues Tuesdays at 9 p.m. on The CW.