Jim Edmonds is speaking up.

Following reports the retired baseball pro filed for divorce from his wife of five years, Meghan King Edmonds, Jim has now publicly fired back at claims he cheated on her with their nanny.

"It's one thing to be accused of something. It's another thing to be so negligent and so careless, and ruin the lives of innocent young people.. I did not sleep with our nanny," he declared in an Instagram post on Monday. "She's not just a nanny, she is someone that we brought into our house and promised to protect and look after while she was in our home. We have been treating and raising this young girl like she is our own child. For someone to accuse me of sleeping with her is not only wrong, it's disgusting and irresponsible."

Edmonds continued, "Just because I am an athlete and I was portrayed as a bad person on bravo TV. Doesn't mean I dont have a clue what life is all about. We made a promise to that young girls mom, that We would take care of her and make sure that she was safe while she was in our hands. I will not sit here and take this bulls@!t without fighting back. Just because you're extremely whitty and intelligent, and know how to play the Instagram game. Doesn't give you the right to use that platform to wrongfully accuse. Not only is it irresponsible. It is dangerous and puts my family in harms way." 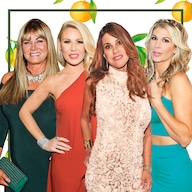 Real Housewives of Orange County: Where Are They Now?

Edmonds concluded, "We all make mistakes. This is not one of those times. My heart is broken for everyone involved. if you get anything out of this post. Get the truth."

Back in June, the former Real Housewives of Orange County star addressed reports of Jim sexting another woman, writing on her website, "I called Jimmy and he confessed to me that he had exchanged lewd photos with this woman over the course of several months and a physical relationship never existed. He paid her off to protect me so I'd never find out."

In a statement to Us Weekly, Jim admitted to a "lapse in judgment" and making "a very poor decision." "I engaged in an inappropriate conversation with this person...At no time was there any type of relationship or physical contact. Absolutely none. This is someone trying to profit from my name. I am aware she has done this to others in the past."

However, he told the magazine he "never had any sort of a physical relationship outside of my marriage with her or anyone else."