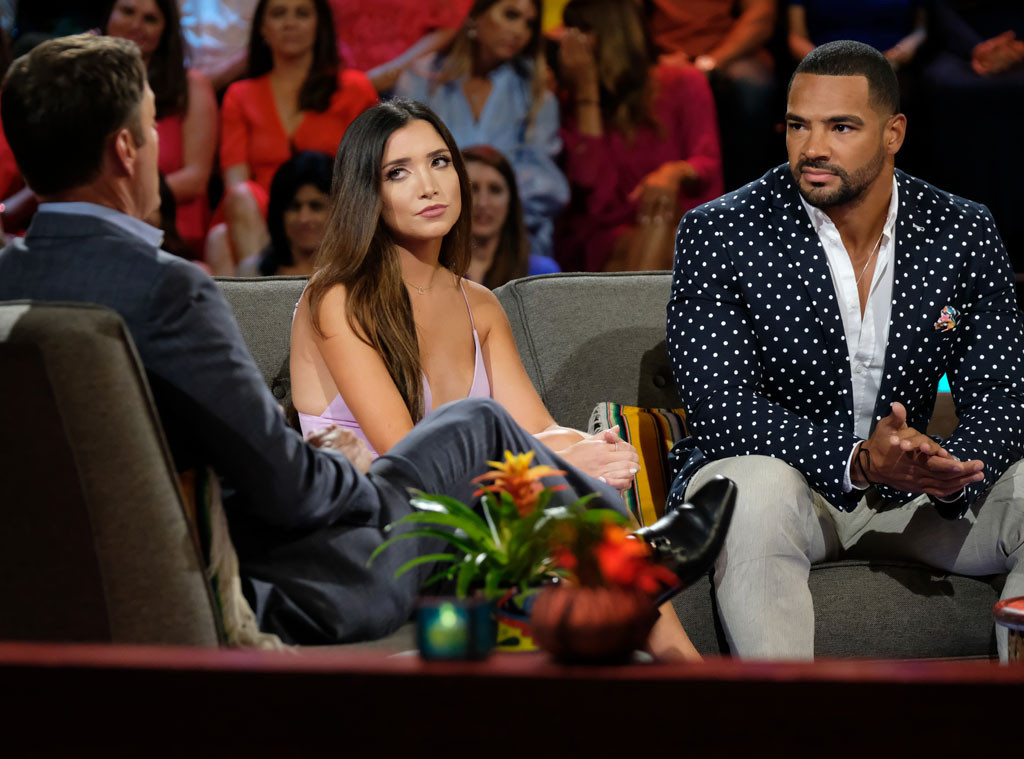 The Bachelor in Paradise  finale was three hours long and yet there still was not enough time to cover everything that went down between Clay Harbor and Nicole Lopez-Alvar.

Luckily, the Bachelor in Paradise Twitter is giving people the footage they want and, boy, is it getting people riled up. In the eight minute video, Clay and Nicole duke it out over her claim that she was "about to become Angela 2.0."

Just a small recap: at the final rose ceremony Clay told Nicole he couldn't propose or say he loved her because he "wasn't there yet", but he did want to explore their relationship on the outside. However, Nicole wouldn't accept that and stormed off in tears.

"I was about to maybe be dangling on to his what-ifs and, 'Maybe i'll get there, maybe', but what if another two months, he would've still not have been there. Another year?" She tells Chris Harrison, "And that's not acceptable."

But, in Clay's defense, he was just being pragmatic about the future of their relationship. He explained to Nicole, "I didn't understand why you weren't open to the possibility of leaving and dating and being boyfriend and girlfriend and meeting each other's family; meeting each other's friends; seeing how our lives would work outside of this. I'm telling you that's what I wanted."

Clay and Nicole take the hot seat in this deleted scene of the #BachelorInParadise Finale Event. pic.twitter.com/JInJ4OvzAO

Moreover, Clay asserted that he did "share doubts" about their future.

Nicole wasn't having it though. She said that if Clay really wanted to be with her, he "would've sacrificed a little bit," instead of leading her on. "It's a right to be unsure and have doubts about a relationship but what's not OK is to then lead me on or lead a woman like Angela on for an extended amount of time, become intimate with them and let them truly fall in love with you and then all of a sudden when things get so serious, you know, all of a sudden doubts are coming out," she accused.

Then, Nicole and Angela essentially tag-teamed Clay. Angela, who dated him for seven months, told him that he should've "taken the time" after their relationship to make sure that he was ready to commit to someone. She held back tears as she said to him, "I wish you'd be more aware. Your actions trample people's hearts."

But when Clay apologized to Angela and Nicole, Nicole cut him off and him that she is done because she found "someone who actually wants a relationship."

Then, as Clay tried to get a word in, Nicole proclaimed, "It's alright... I honestly don't have time to wait. I'm young. This is my time. It's 2019. No woman should have to even doubt if the man they're with is in love with them."

Since the finale aired, both Clay and Nicole have said that they stand by their actions, regardless of public opinion.

TAGS/ The Bachelor , Bachelor in Paradise , Controversy , Celebrities , Apple News , Top Stories
GET POP CULTURED!
*Email entered incorrectly. Please try again.
By subscribing to our newsletter you agree to the Privacy Policy and Terms of Use
Daily
Weekly