Watch Kylie Jenner Give Away $750,000 to an ''Amazing'' Women's Empowerment Group

Kylie Jenner is using her celebrity platform for a good cause.

Kicking off the 17th season of the Ellen DeGeneres Show, the 22-year-old Keeping Up With the Kardashians star appeared on Monday's episode with her mother, Kris Jenner. In fact, this marked the Kylie Cosmetics founder's first sit-down interview since giving birth to her and Travis Scott's daughter, Stormi Webster.

Making this episode even more special than what it already was, Kylie surprised a women's empowerment organization called Nest of Love with a total of $750,000. After both reality TV personalities learned about the group's inspiring work from founder Samantha Gil and two of its main members, Briana Grumet and Daniela Villa, the famous mother-daughter duo wanted to help out and give back.

Which is exactly what they did.

Kylie gifted the organization with $150,000 and $100,000 for Samantha. What's more? Each member of the female group went home a Kylie Cosmetics Birthday collection and ... something even bigger. 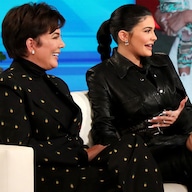 How Kylie Jenner's Sisters Really Feel About Her Billionaire Status

"We are giving you each $50,000," Kylie shared with the organization's members. "Each one of you.. Each of you for the amazing things you guys do."

She added, "You guys are so amazing."

Additionally, the 63-year-old momager and Kardashian-Jenner matriarch praised the Florida-based group for their work and reiterated Kylie's comments. "We admire you all so much," she said. "I know I do." Ellen DeGeneres revealed that a total of $750,000 was gifted, thanks to the beauty mogul from the proceeds of the Kylie Cosmetics Birthday Collection.

The news of Kylie's generous donation comes a few months after she was named the youngest self-made billionaire by Forbes. Of course, with her impressive status she told Ellen that her famous sisters joke with her all the time about money.

When the daytime host asked the 22-year-old star if her family gives her a "hard time," she responded, "It's only when we're in a group chat talking about where we should go on a group trip, and then everyone's like, 'Kylie? Are you going to pay for it?' Or, just stuff like that."

She added, "They're really proud of me, for sure."

You can watch the special moment Kylie and Kris gifted the women's group and learn more about their work in the video clip above! And just know that Kylie isn't done handing out surprises. She's going to give another fan something unforgettable on Thursday's episode of The Ellen DeGeneres Show.