Katharine McPhee & David Foster Are Married! See Their Fairytale-Like Romance Over the Years 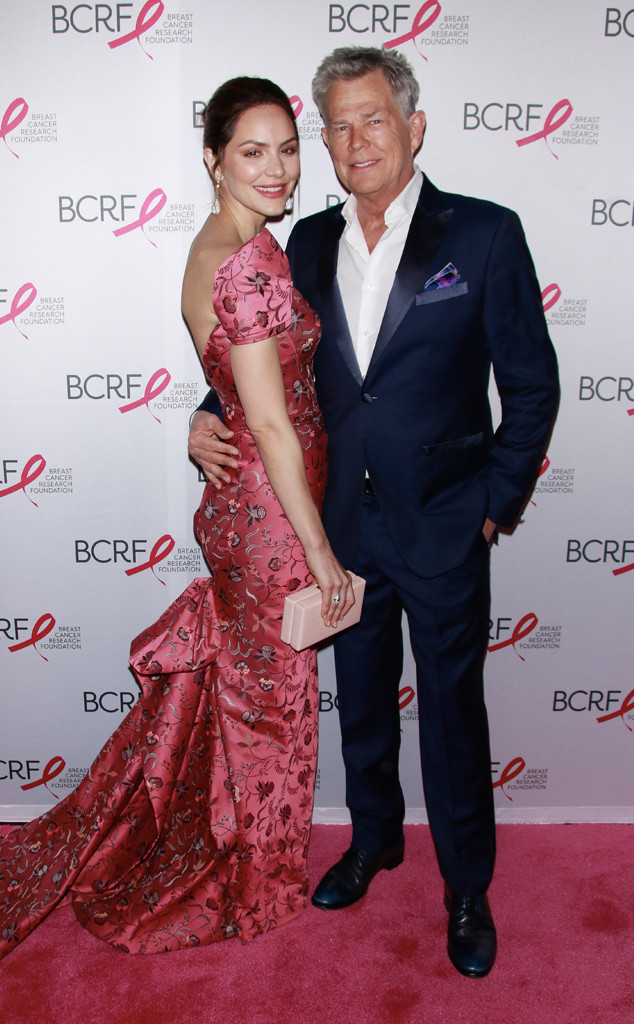 Katharine McPhee and David Foster have tied the knot.

A source exclusively told E! News the newlyweds said "I do" during a romantic and intimate ceremony on Friday, June 28 at the church of St. Yeghiche in London. The happy couple invited close friends and family to witness their special day, including the 69-year-old music producer's daughters, Sara and Erin Foster. This is the Scorpion star's second wedding, and Foster's fifth.

The pair first sparked romance rumors nearly two years ago, after being spotted getting dinner in Malibu. The two weren't afraid to show off major PDA either, as a source previously shared they "were very intimate" during their date night.

"David was seen grabbing Katharine's face and kissing her cheek several times," the insider dished at the time. "Katharine was doing the same to David's face and they were acting as if they were a couple."

Fast forward to now, and, as they say, the rest is history!

David Foster Taking a Back Seat to Wedding Planning

Before walking down the aisle in her jaw-dropping bridal gown, the former American Idol contestant shared her excitement for the next chapter in her life. During her extravagant bachelorette party in early May, she captioned a photo of her veil with a few heartwarming words, "The future is happy and bright."

To see the couple's special and fairytale-like romance, scroll through our gallery below! 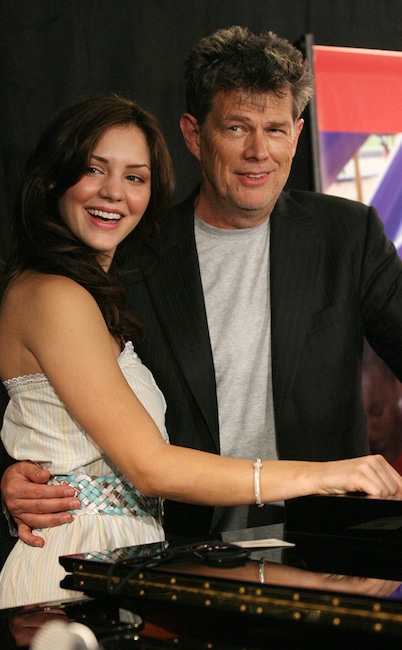 Rewind all the way back to 2006, when the pair meet on season 5 of American Idol. The record producer serves as McPhee's mentor on the singing competition, which kickstarts several musical collaboration and chance run-ins at celebrity events over the next several years. 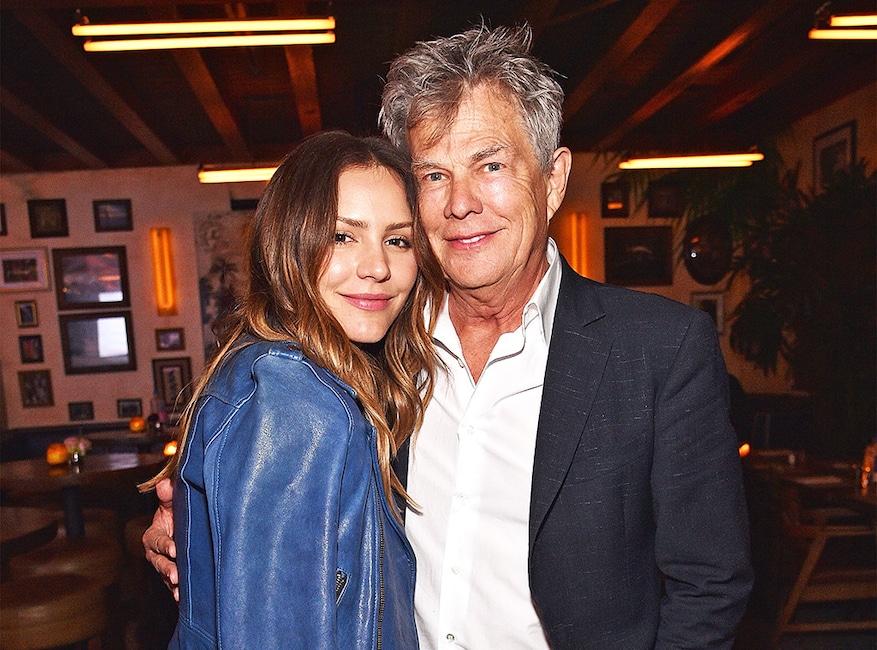 In May 2017, eyewitnesses spot the undercover lovebirds enjoying a "very intimate" dinner date in Malibu. "By the end of the date, Katharine sat on David's side of the table and cuddled him with a blanket," a source shares with E! News. 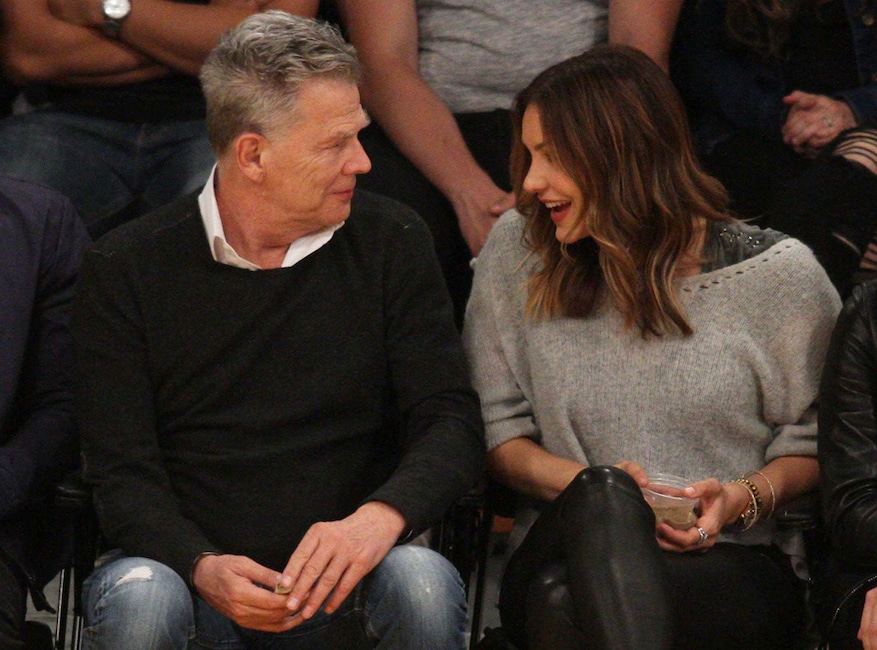 After a fairly quiet summer, Katharine and David heat up once again at a Los Angeles Lakers game in November. The Smash star also attends the performer's 68th birthday celebration alongside Foster's daughters Erin Foster and Sara Foster, as well as his stepsons Brody Jenner and Brandon Jenner. 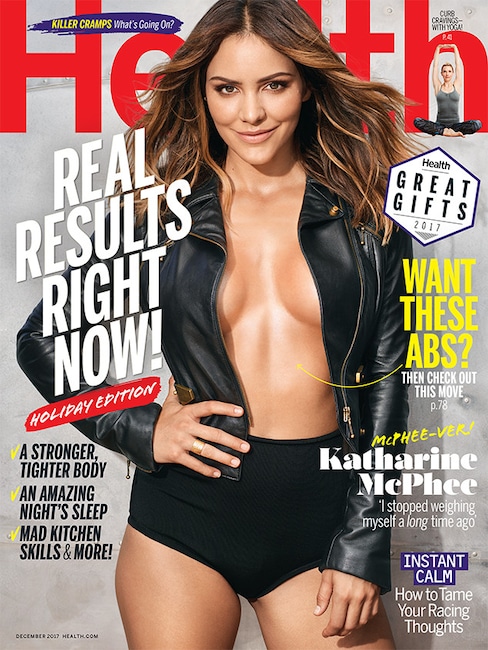 The "Over It" songstress plays coy about the dynamic of their relationship in an interview with Health magazine, sharing, "We're very close friends, and we've been friends for a long time. I'm really, really fond of him, and I think he's an incredible person... People can say whatever they want." 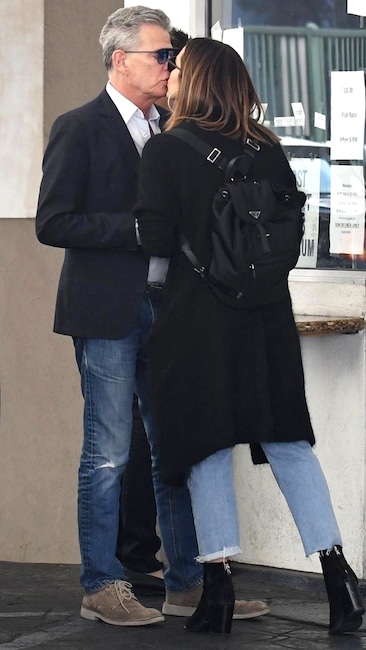 Sealed With a Smooch

It's official! By December, the couple is kissing in public (pictured here leaving the Beverly Hills restaurant E Baldi) and an insider tells E! News Katharine and David are "more serious than they have ever been." Adds the source, "David is usually a playboy but Katharine has made him change his ways, and he is really comfortable with her." 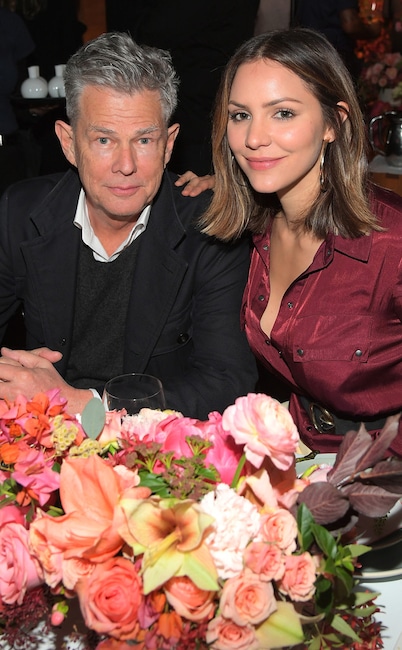 Their talents unite during a star-studded holiday bash, where the couple performs lively renditions of "White Christmas" and "My Grown Up Christmas List." 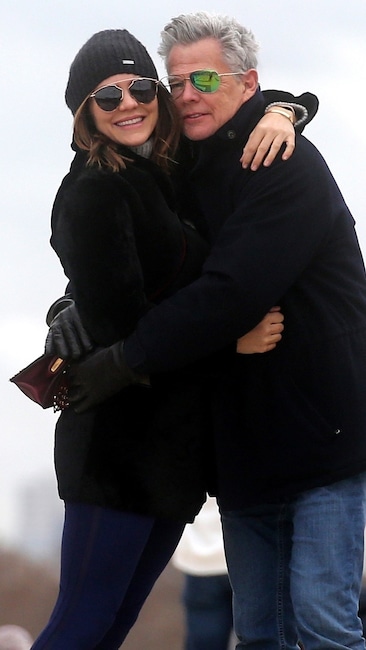 From Paris with love! Katharine and David round out 2017 with a getaway to Paris. "They couldn't keep their hands off each other," an eyewitness describes of their rendexvous, "and immediately took a romantic walk through the rainy streets of Paris." 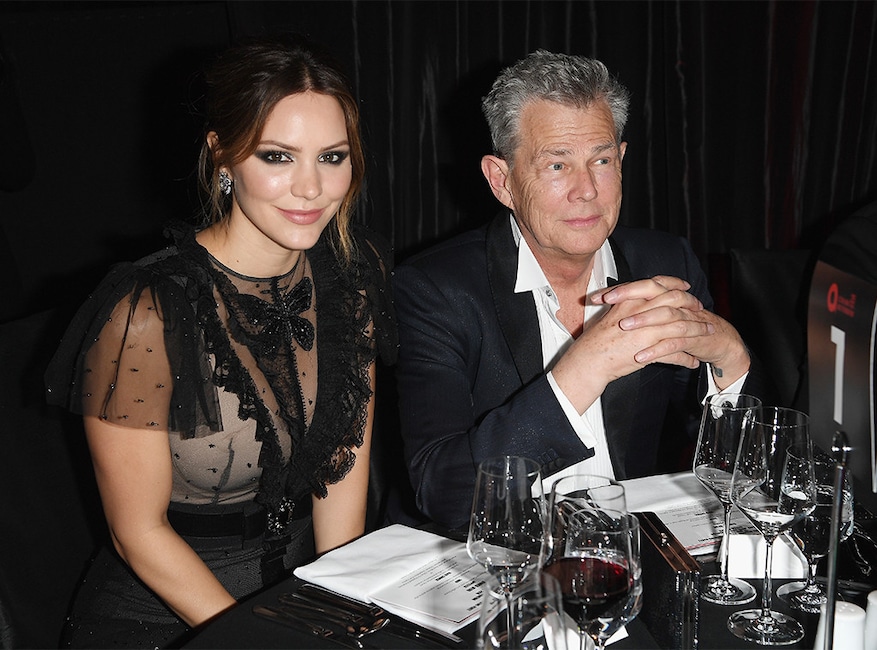 Not so fast, you two. In January, a source tells E! News the couple isn't rushing down the aisle: "David has not shown any interest in getting married again. He hasn't discounted how he feels about Katherine but there are no plans for them to even get engaged anytime soon." 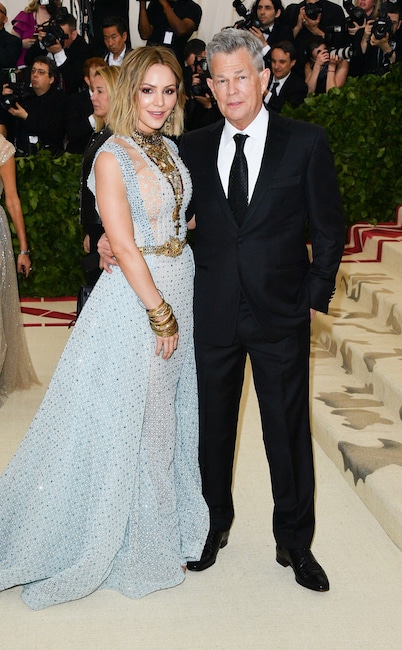 The First Monday in May

Katharine and David show off their undeniable chemistry at the 2018 Met Gala. A red carpet to remember, no doubt! 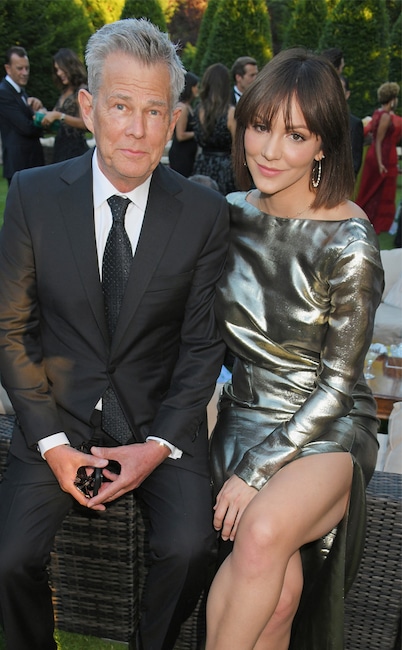 In July, E! News reports that Foster has finally popped the question while on vacation with McPhee in Europe. "Katherine has been wanting this for a while now," a source reveals. "David has been planning the engagement, but has kept it very secretive. Only a few family members knew about his plans." The two are smitten with each other at the 2018 Carousel Of Hope Ball. McPhee sizzles in a pink satin dress, while her beau opts for something classic. 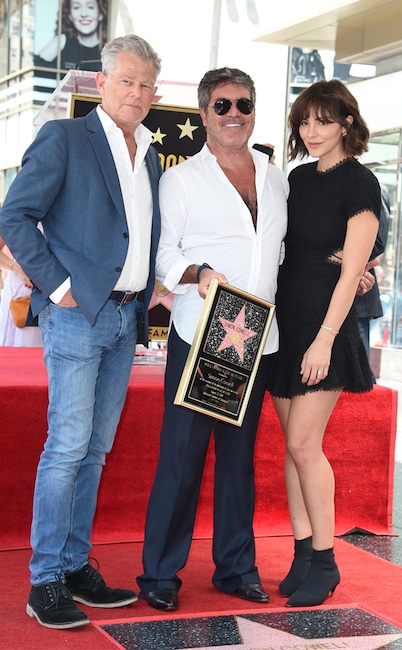 It's a reunion! The couple supports and celebrates Simon Cowell as he receives his Hollywood Walk of Fame star in Los Angeles. 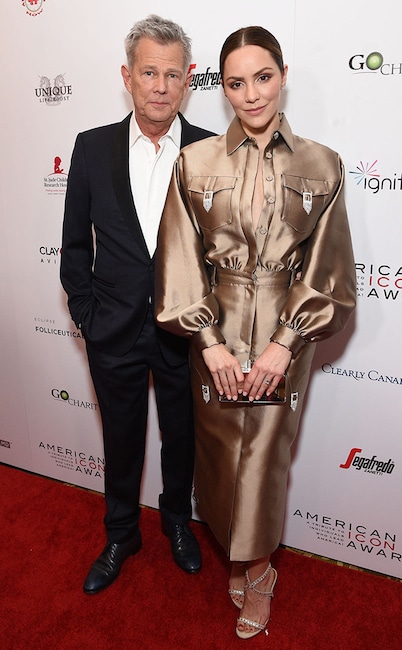 The couple poses for the camera on the red carpet at the American Icon Awards gala. 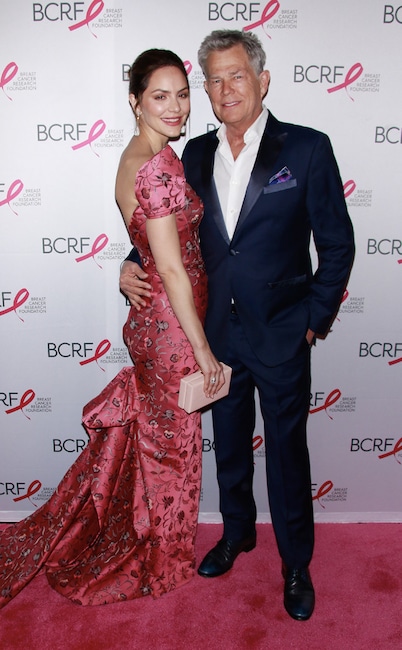 Think pink! The actress lights up the red carpet with her mesmerizing pink gown at the Breast Cancer Research Foundation's 2019 Hot Pink Party. Her man wears a traditional black and white suit. 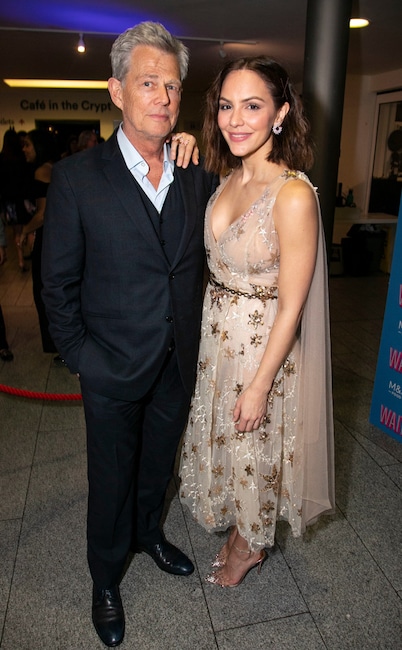 After scoring the lead in the London production of Sara Bareilles' Tony-nominated musical, the pair attends the press night after-party for "Waitress: The Musical." 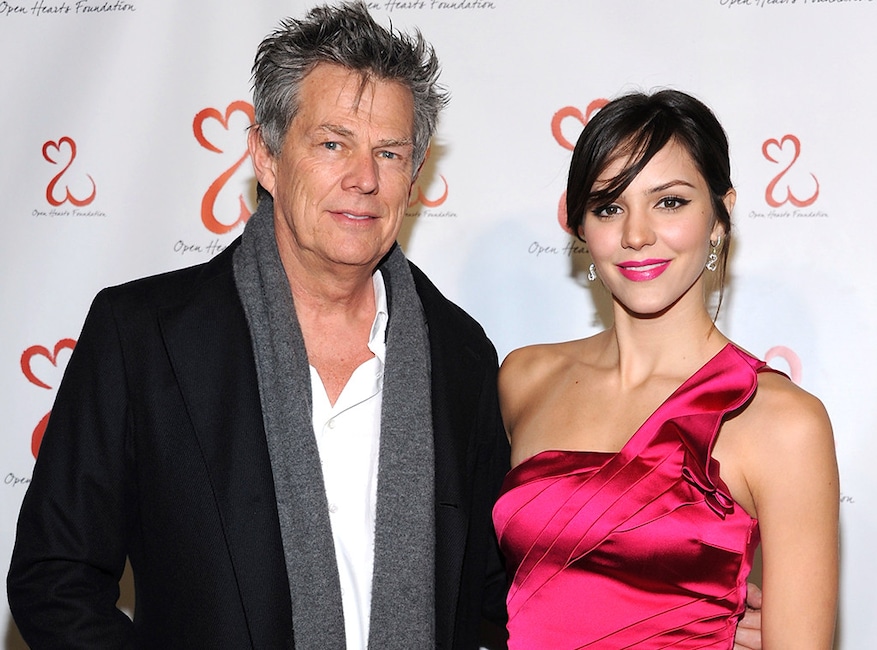 "Exactly 13 years ago today my very first single, 'Somewhere Over The Rainbow,' was released right after Idol. Today... I'm marrying the man who produced it," the bride posted on Instagram. "Life is full of beautiful coincidences, isn't it? Thank you for taking me over the rainbow, David."

Congrats to the newlyweds!