90 Day Fiancé: The Other Way Star Laura Reveals She Catfished Her Own Husband

Just when you thought 90 Day Fiancé: The Other Way couldn't be any more dramatic—and entertaining—the TLC reality show introduced Laura, 51, and her 29-year-old fiancé Aladin, a personal trainer in Qatar.

Laura hasn't made her way to Qatar just yet, but she is getting ready to say goodbye to her life in Florida, including her 21-year-old son Liam. She said the two are best buds, but Liam isn't exactly ready to call Aladin dad. In an interview with producers, Liam admitted he was nervous.

"I don't understand what Aladin hopes to get out of this. She's going to be 75 when he's 45," Liam said, noting she can't have children, and "I will never accept him as a father figure, he's kind of getting the short-end of the stick on this."

Laura met Aladin after roughly a year of chatting and they got engaged three days into the visit. "I thought, ‘You know what? You only live once,' so I thought, what the heck, let's do it," Laura said about the engagement and big move. However, she admitted to still having insecurities over the age gap, and issues trusting men. Eight years into her previous marriage, Laura saw her husband's email account, complete with emails confirming his dating site accounts. Instead of confronting him, she decided to make an account—with a fake photo—and catfish her husband. And it worked.

Laura, in her fake persona, told her husband she liked the look of bald men. What did her husband do? He asked her to shave his head. She obliged and knew her marriage was over. 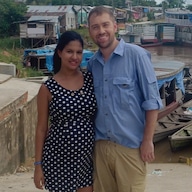 90 Day Fiancé: The Other Way: Meet the Season 1 Couples

Paul and Karine
After his airport breakdown, Paul told Karine he would have to stay in the United States for a month longer in order to bring all the supplies with him to Brazil. This upset her, so Paul decided to go down to Brazil with just his two bags and make it work. Upon his departure, Paul's mom presented him with a necklace complete with a lock of her hair. "I'll always be with you," Paul's mom cried.

Jenny and Sumit
Despite misgivings of her daughter's Jenny made her final goodbyes.

"I want to be happy too. Like, when is it my turn?" Jenny asked after getting some grief from her family. She made her way to India, but Sumit wasn't there to greet her at the airport. Instead, he was with his family. He ditched the cameras in order to tell them he was moving out for a new job. A lie. They don't want him to be with Jenny.

Corey and Evelin
With Evelin back in Ecuador already, Corey came clean to his parents about his plans to move to South America to be with her. He said Evelin told him it was either have a life in the United States—alone—or one with her in Ecuador. His dad said relationships need compromise, not ultimatums, and both parents questioned how he'll make a living with a cocktail bar he paid for, but is in Evelin's name.