Who Got Jennifer Love Hewitt Pregnant? 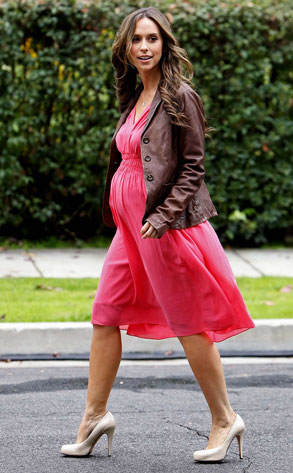 Jennifer Love Hewitt is having a baby!

OK, maybe not in real life, but her Ghost Whisperer character, Melinda Gordon, is finally preggers.

So who's the proud papa? Jim or Sam? All signs point to...Jim!

"Do the math," says Ghost Whisperer show runner P.K. Simonds, "less time has passed for our characters than has passed in the broadcast calendar...basically, time slowed down in the aftermath of the big events at the beginning of the season. [The 12 episodes] since Jim died have taken less than 12 weeks in terms of Jim and Melinda's lives."

Read on for more about the pregnancy, Melinda's dead husband and tonight's epic episode...

So Melinda could've been pregnant this whole time without realizing it? Says Simonds, "Sometimes you don't notice something like that. Especially going through what she's gone through—the cycles [can be] interrupted by traumatic events."

Simonds wants fans to remember that the season "started with [Jim and Melinda] trying to become pregnant, trying very hard [and] facing some obstacles. And just as they seemed to get past those obstacles, tragedy struck."

Tragedy, of course, being Jim's death—and his amnesia after being reincarnated in Sam's body.

And the final blow Sam delivers to his new girlfriend after she at last confides he is really Jim: He believes Melinda Gordon is a mentally unstable widow who is using him as a substitute for her dead husband. (Jim, how could you?!)

So when does Melinda finally start to notice her sexually transmitted parasite, i.e. the baby? And why does she look more than three months pregnant in the picture above? 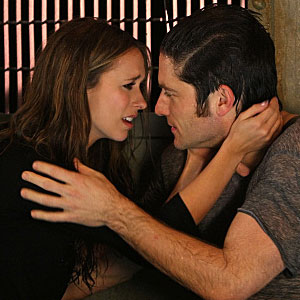 Simonds points out, "Some of the photos have been taken from episodes 21, 22 and 23 (the finale) that were shot after some time has passed. Basically, time slowed down in the aftermath of the big events of the beginning of the season and then speeds up again toward the end of the season."

But before Mel can do a happy Snoopy dance about the baby, she needs Jim there to share the good news with her, right? Right, and that's why you have to tune in to tonight's epic episode, "Leap of Faith."

Says Simonds, "The entire season was built and designed and carefully engineered to give this particular episode the biggest possible punch, the biggest payoff to our audience, especially our loyal viewers who stuck it out." Simonds guarantees that the fans who "make it through this one will be very, very happy."

Happy, sad, mad? We want to hear your opinion after you watch the show, so be sure to come back here with your comments.

For more Ghostly whispers about next season (yes, next!), Dr. Jim (?!), a certain baby's special gifts, the "Book of Changes" and a possible Grandview space-time continuum, make sure to check back for Monday's Spoiler Chat.