Iron Man at your service!

Today the superhero, or rather, the actor who plays the iconic Marvel hero turns 55 years old.

In his five and half decades, Robert Downey Jr. has played some of TV and film's most iconic roles where it's hard to decide which is his best.

Of course, he has dominated the silver screen for the past decade as Iron Man, the quick-witted playboy who was the heart of his own films as well as the Avengers movies.

That said, we've also seen the New York City native define other fictional characters, such as in Sherlock Holmes and the recent Dolittle.

While we also are used to seeing him in movie theaters, true fans remember he also was a huge part of Ally McBeal and even had a short stint on Saturday Night Live.

With all that talent, it's no surprise the actor has won a BAFTA, People's Choice Awards and Golden Globes trophy, as well as been nominated for an Academy Award. 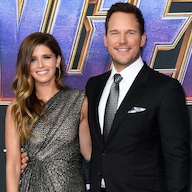 And while we can't wait to see him return to our screens with his next big project, we're taking the day to celebrate his birthday by looking back at all his best roles.

See our roundup below and then sound off on which one is your favorite. 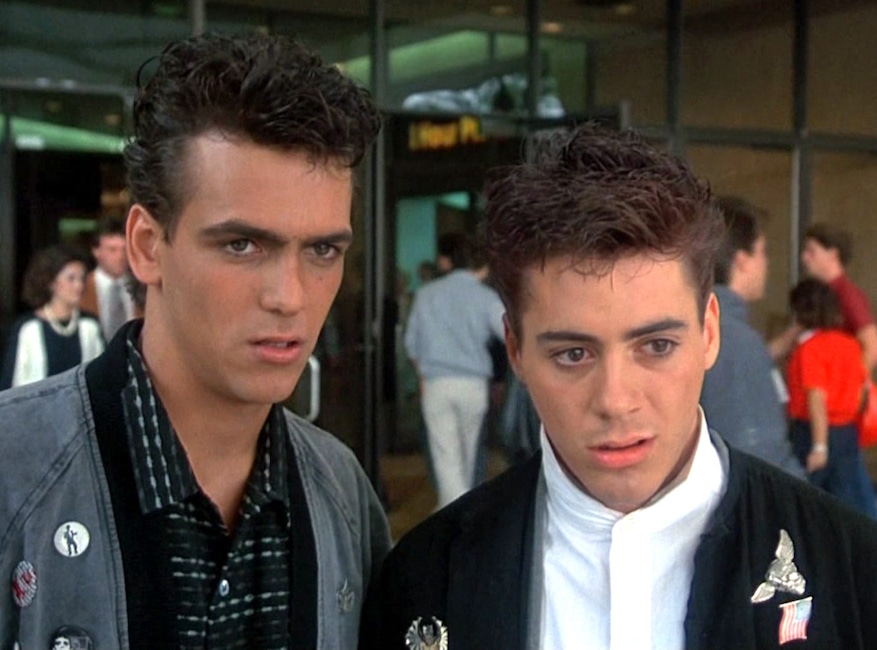 Things change however when the nerds makes a hot woman who teaches them how to be popular, look good and no longer be zeros. 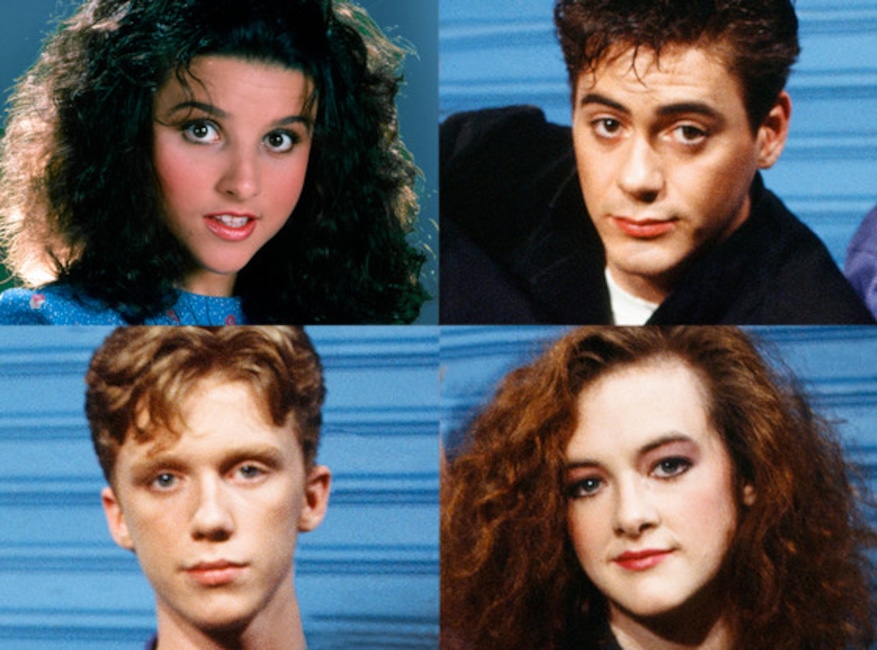 At just 20 years old, Downey joined the iconic sketch series for a short stint of one season.

While his tenure at Studio 8H was short, he did get to return when he hosted the show in 1996. 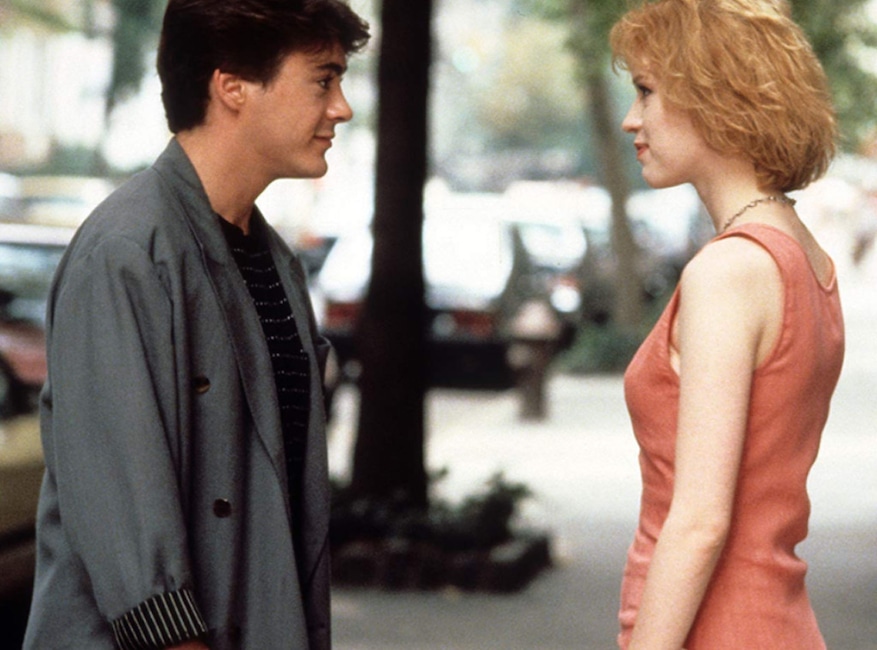 In this 1987 comedy, womanizer Jack Jerico (Downey) falls for Randy Jensen (Molly Ringwald), only to learn that his perfect match is in debt to the mafia. 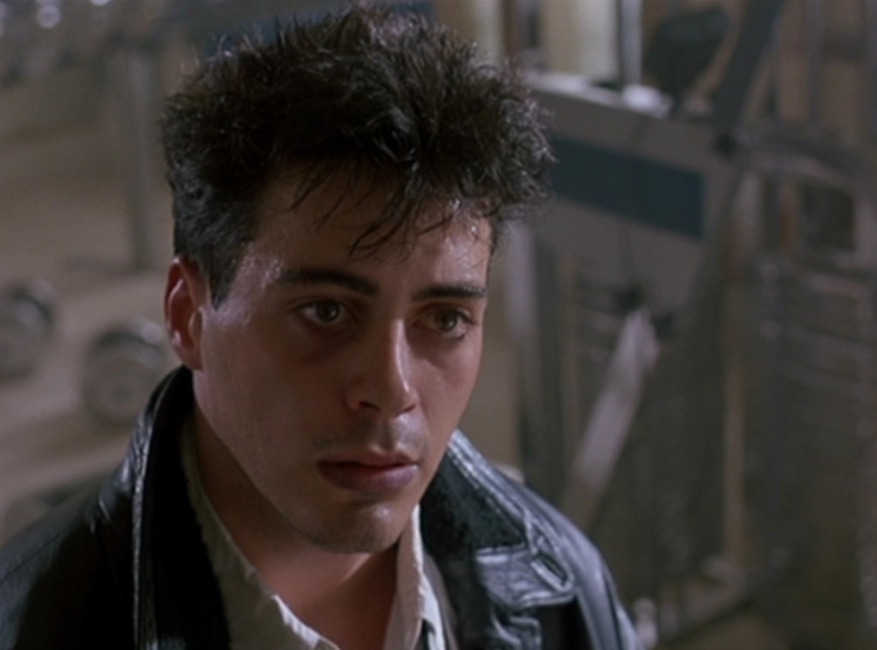 In this 1987 drama, Downey plays Julian, a drug addict whose startup record company takes a turn for the worst in Los Angeles.

He tries to hide it but when his best friend returns from college, he has to own up to his issues. 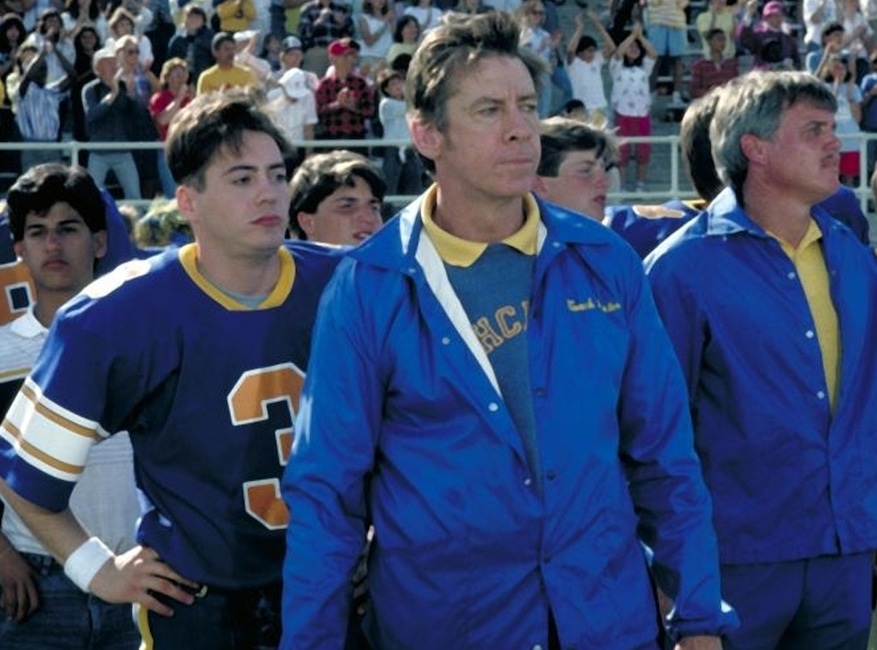 The 1988 comedy revolves around the college recruitment process for high school football players, one of which is played by Downey. 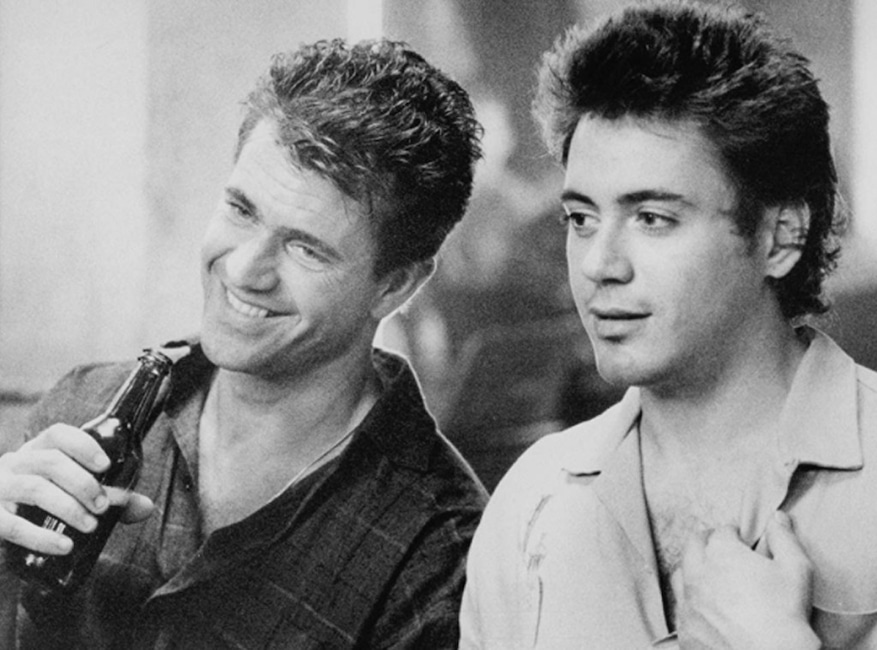 With no job on the horizon, Billy (Downey) is recruited to the CIA's private airline during the Vietnam War to fly into some pretty intense and illegal situations. 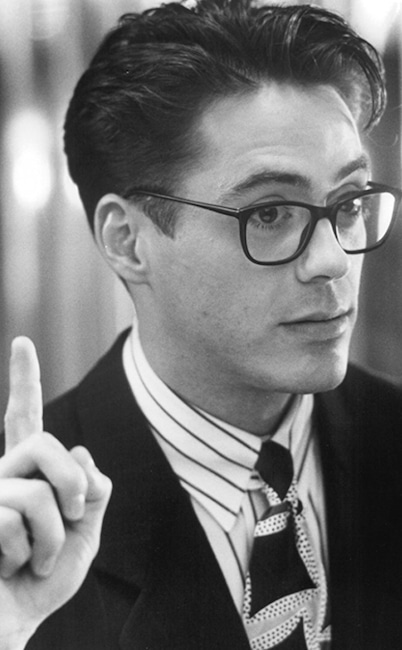 David Barnes (Downey) is a producer of a daytime drama, which stars Sally Field's Celeste Talbert in this comedy.

As Celeste's life begins to fall apart, her on-screen enemy bands together with David to try and ruin her career but it doesn't exactly go the way they plan. 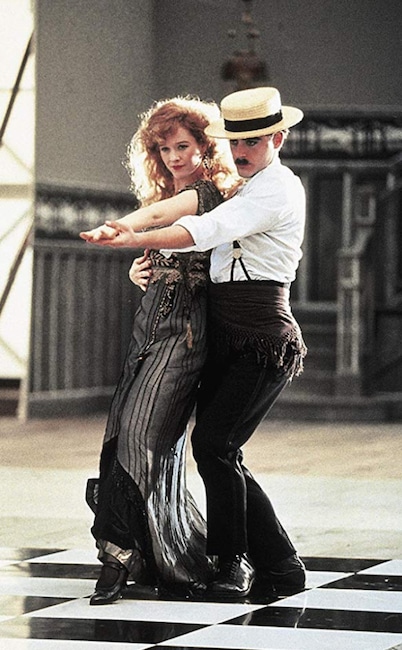 Downey is Charlie Chaplin in this 1992 film about the iconic silent film star himself. 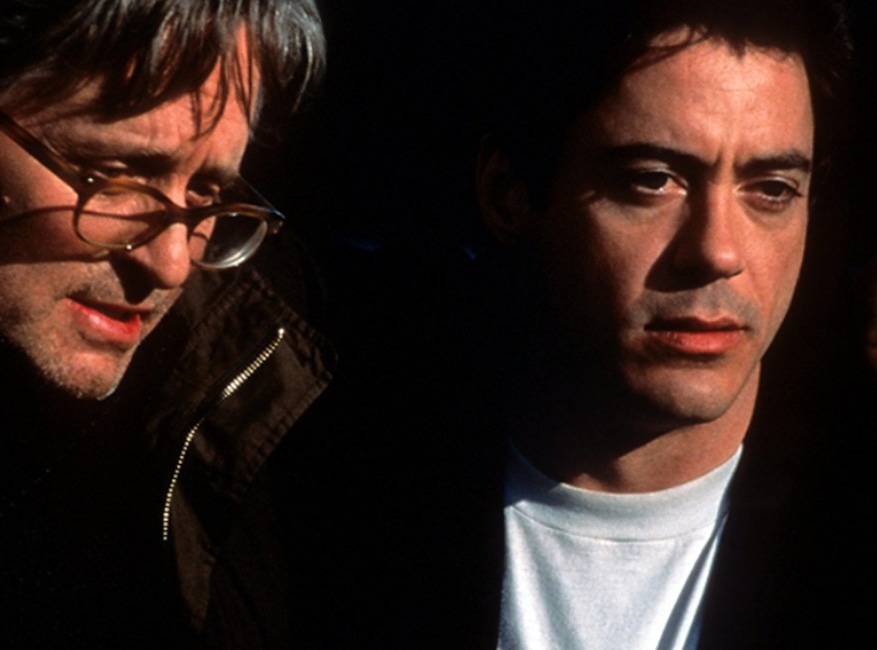 In this 2000 comedy-drama, Downey co-stars with Michael Douglas, Tobey Maguire and Katie Holmes, playing the role of a book editor. 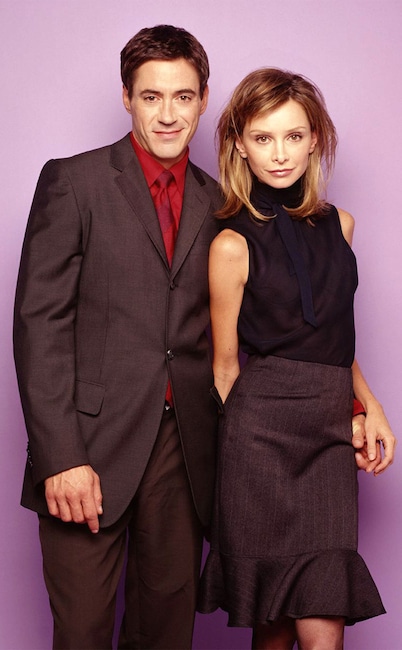 Throughout season four of the show the two fell in love and fans couldn't get enough. Sadly, he didn't appear in the season four finale or the fifth and final season. 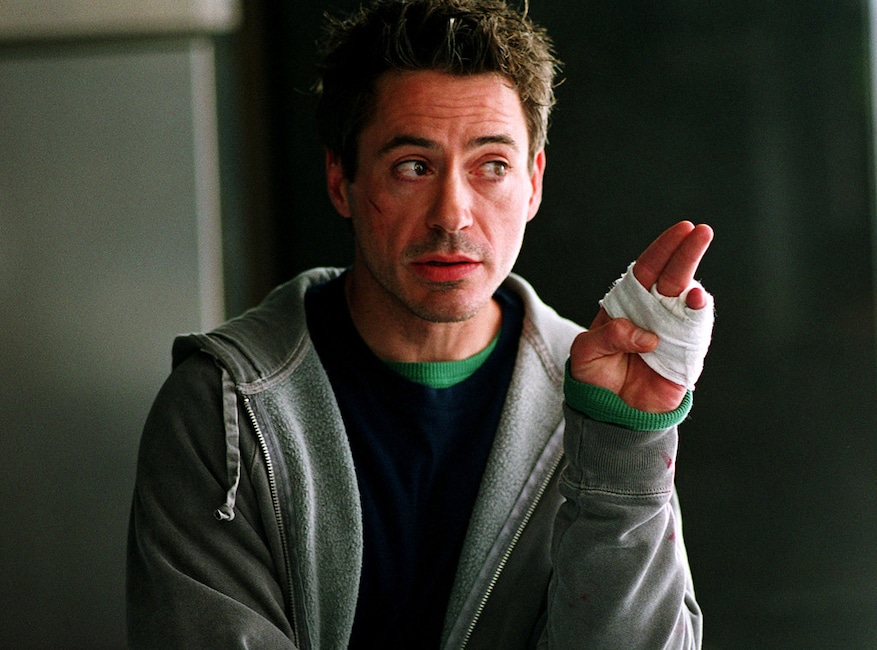 In this 2005 dark comedy, Downey plays Harry Lockhart, a thief who stumbles upon an acting auditions while evading the cops.

His emotional breakdown convinces casting he's a method actor perfect for the part, and he is hilariously set up with a real private investigator (Val Kilmer) to shadow him to learn the part.

However, total chaos ensues, including chopped off fingers and a staggering body count. 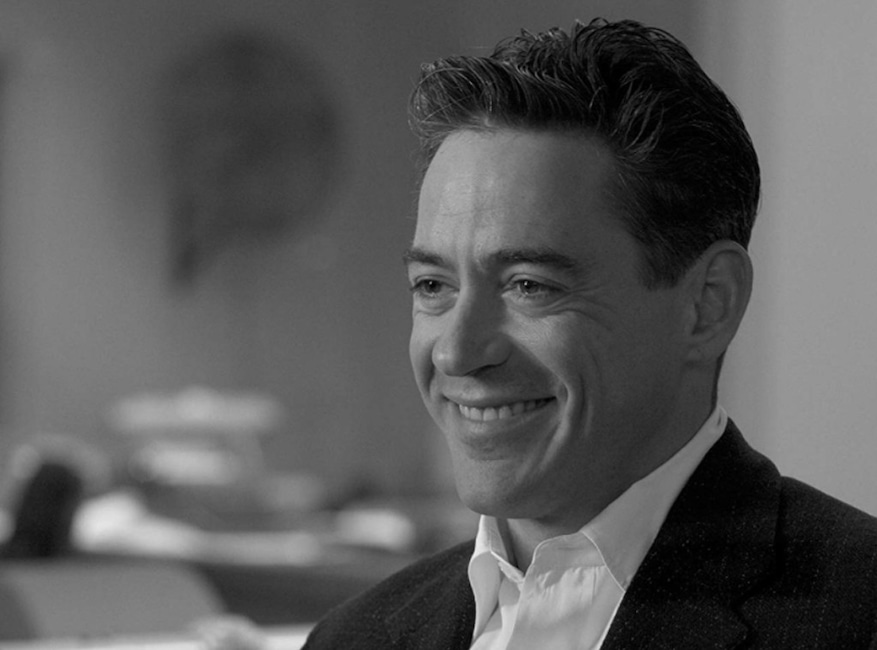 The New York City native plays reporter Joseph Wershba in the 2005 black-and-white historical drama about broadcast journalist Edward R. Murrow when he set out to bring down Senator Joseph McCarthy. 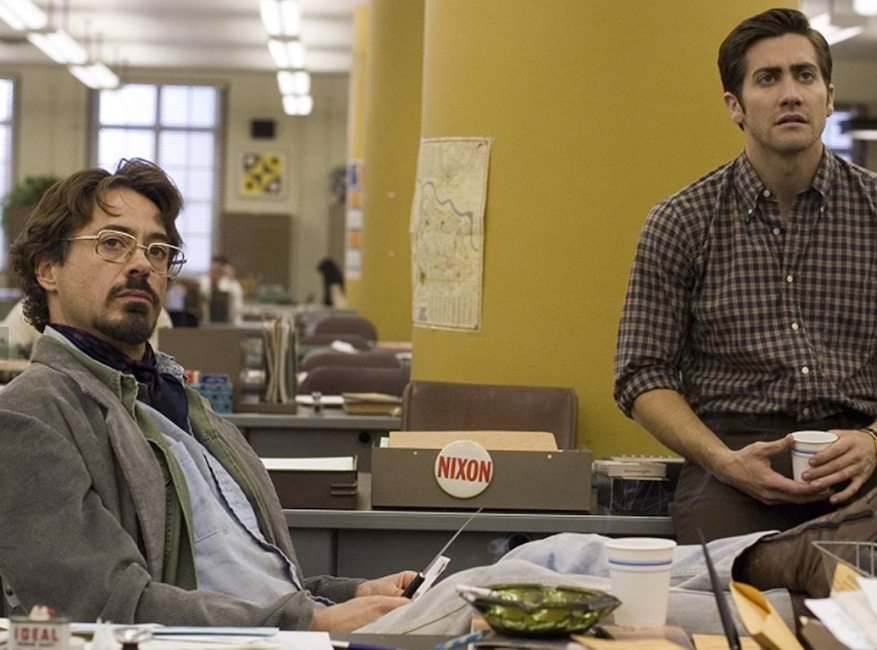 Co-starring with Jake Gyllenhaal and Mark Ruffalo, Downey plays the part of Paul Avery, a journalist for the San Francisco Chronicle assigned to the Zodiac case back in the late 1960s and early 1970s. 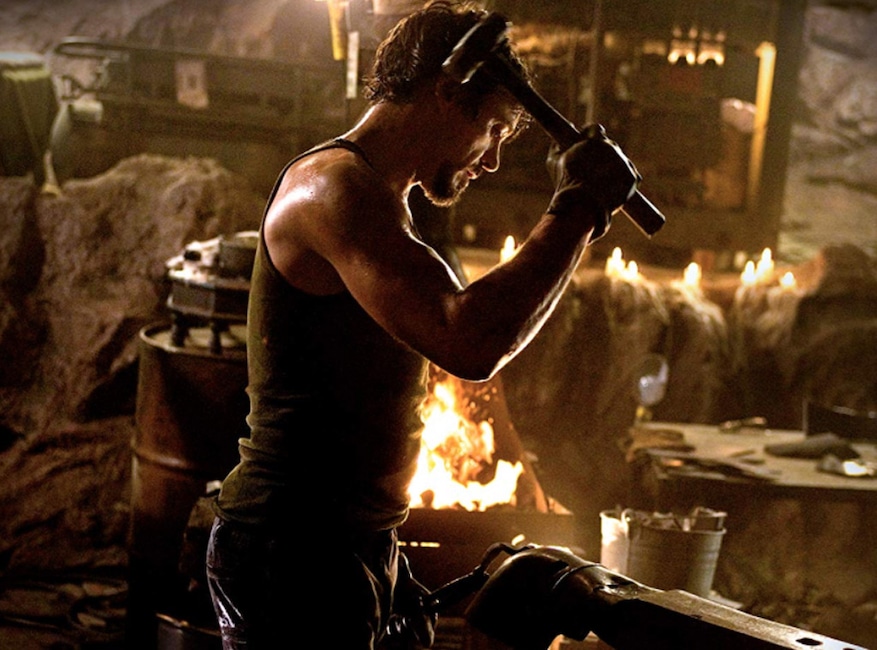 In 2008, Downey put on the Iron Man suit for the first time playing Tony Stark AKA Iron Man, a genius inventor and playboy who becomes a superhero. 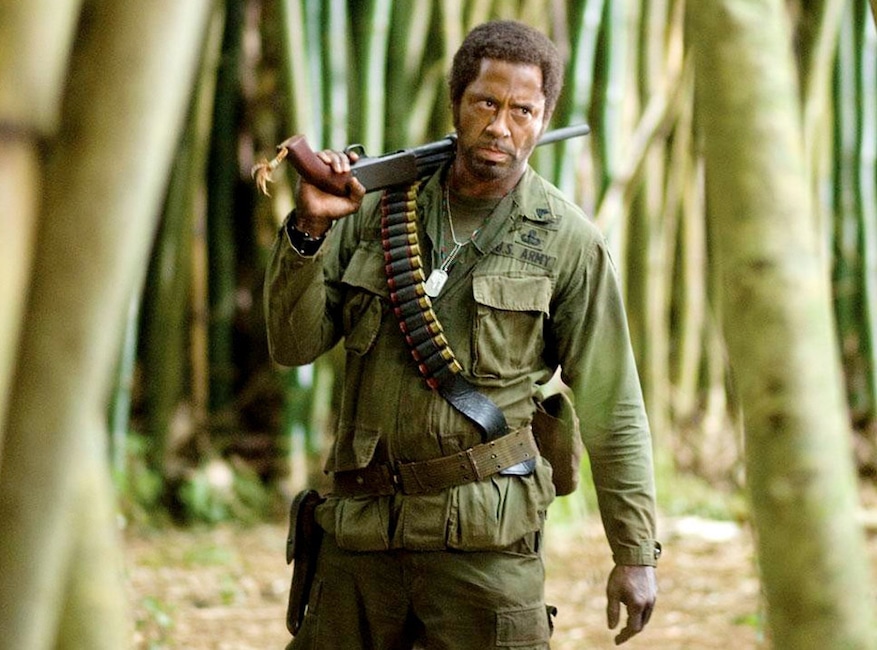 Downey acts as Kirk Lazarus, an Australian method actor, in this 2008 action comedy, which shows a group of actors who find themselves forced to become the soldiers they are portraying on screen. 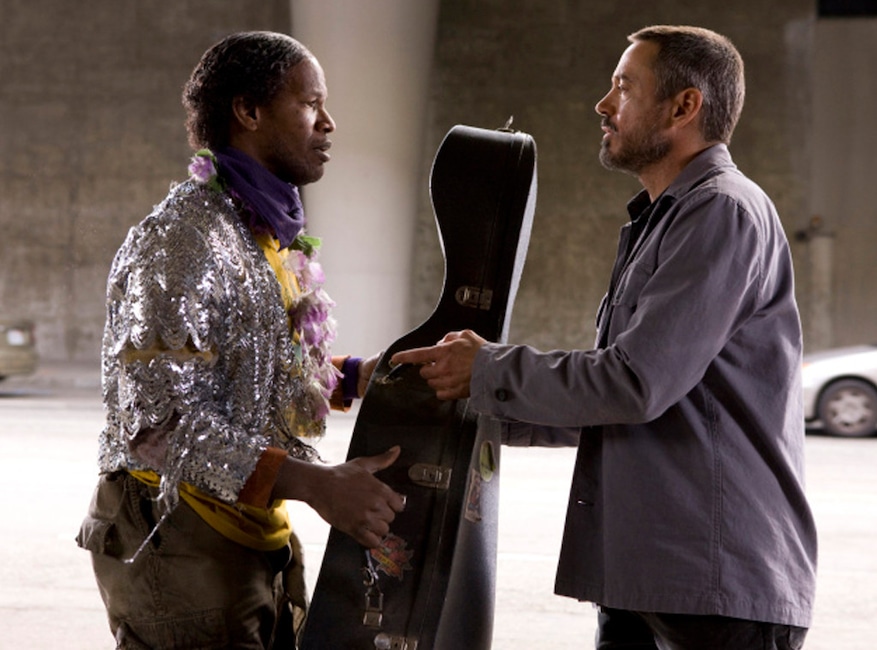 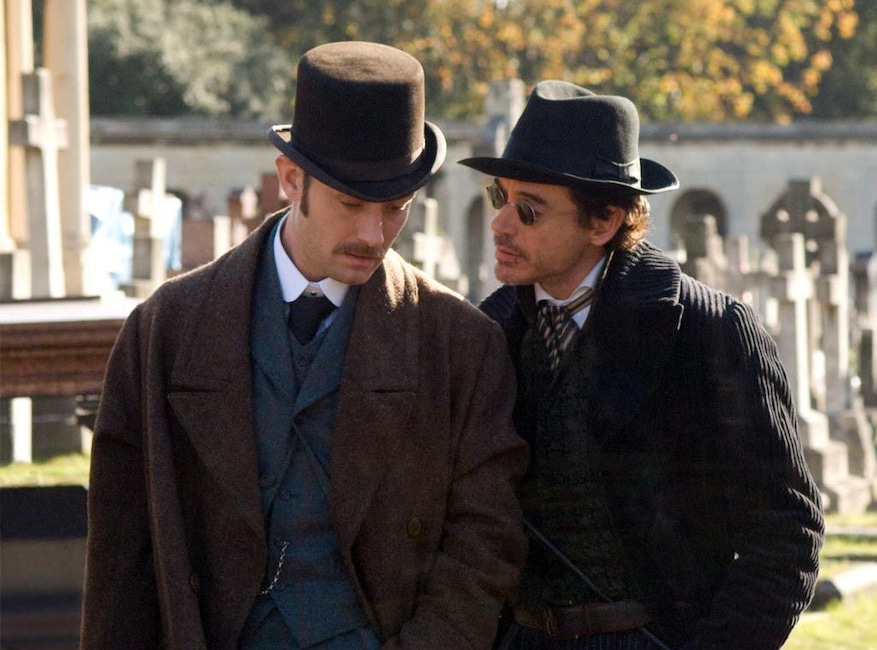 Downey stars as private detective Sherlock Holmes in this 2009 crime film. In the movie, Sherlock Holmes and his partner Watson (Jude Law) must use their wits and strengths to stop a bad guy who is threatening to destroy all of England. 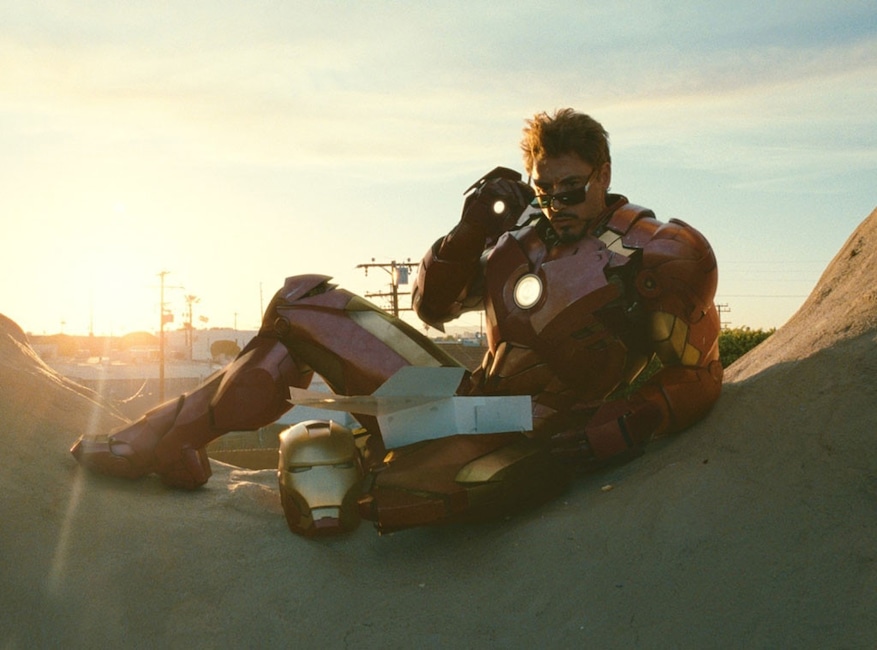 In the second hit film of the superhero franchise, Downey along with Gwyneth Paltrow, Scarlett Johansson and Samuel L. Jackson must keep the world safe while dealing with his identity being revealed and his health on the decline. 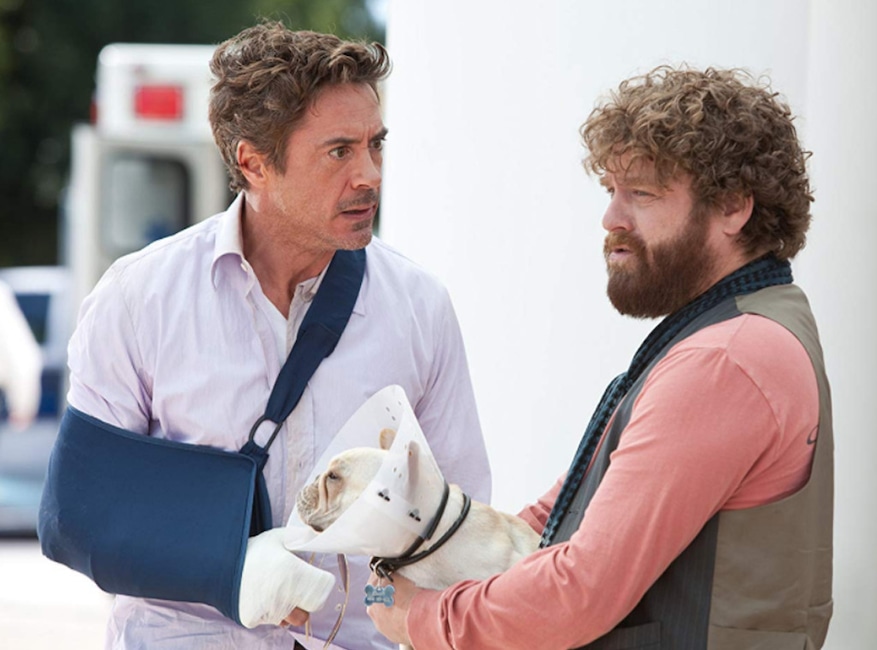 The actor plays the part of Peter Highman, a successful architect who gets stuck on a road trip with an aspiring actor named Ethan Tremblay (Zach Galifianakis) in order to make it home before his wife gives birth. 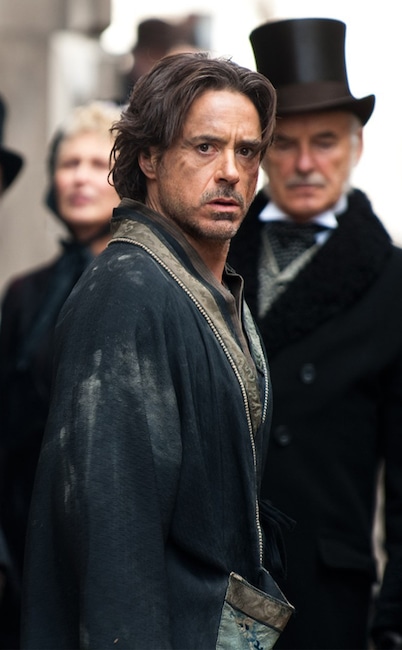 Sherlock Holmes: A Game of Shadows

Sherlock (Downey) and Watson (Law) reunited in 2011 to hunt down and stop Professor Moriarty (Jared Harris), who decided to commit random crimes all over Europe. 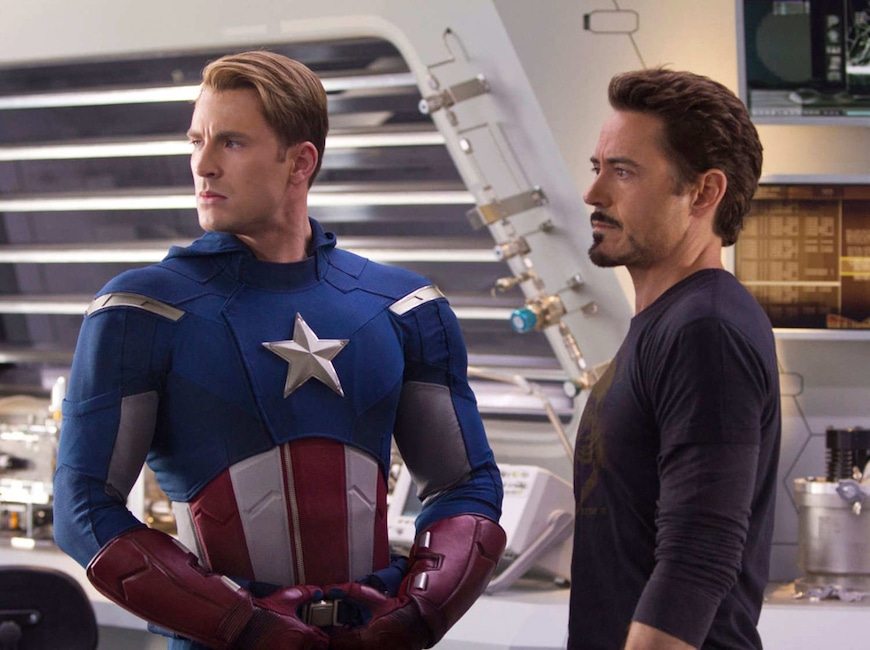 In 2012, Downey played Iron Man in this whopping $1.5 billion-grossing hit, which was the first film to show the Earth's mightiest heroes coming together to fight as one to stop Loki (Tom Hiddleston) from enslaving all of humanity. 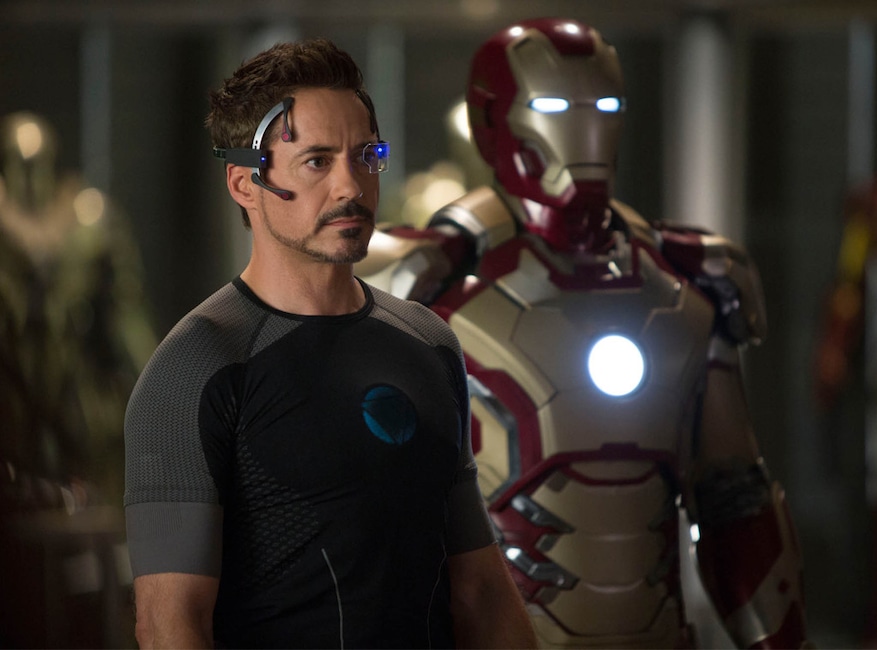 In 2013, Downey reprised his role as both Tony Stark and Iron Man. This time his character's world is torn apart by Mandarin (Ben Kingsley), so he must start over and go into rebuild mode to get back to normal. 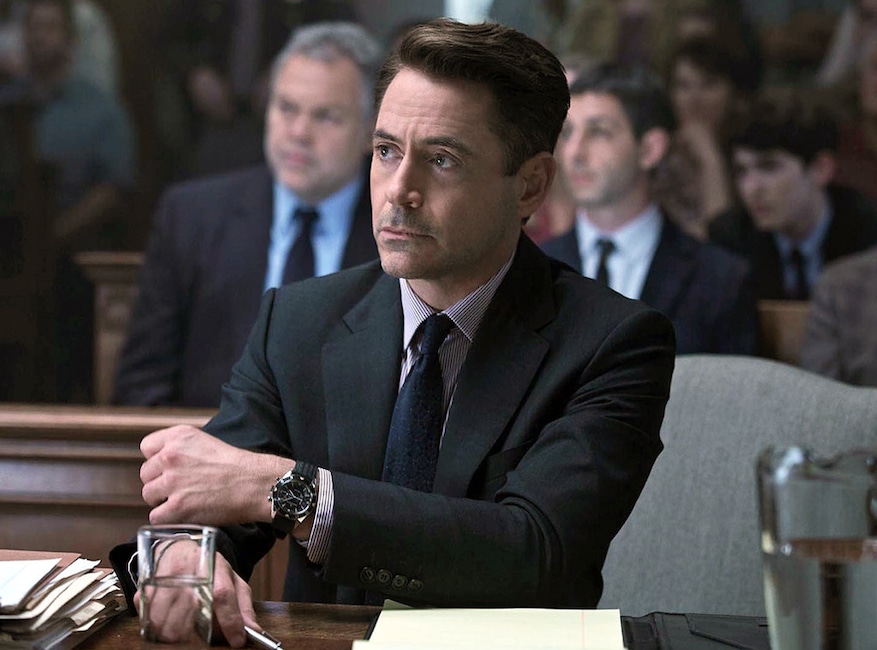 Hank Palmer (Downey), a big-city lawyer, returns home to help his father, the town's judge, who is suspected of murder. Along the way he reconnects with his estranged family and puts his smarts to good work. 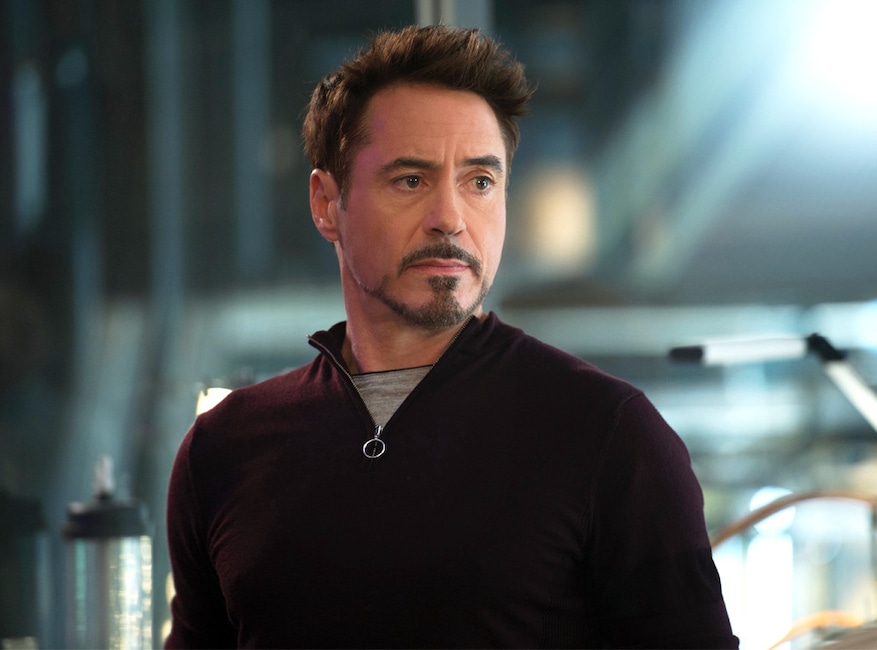 This time around the team of superheroes attempt to start a peacekeeping program called Ultron, but after things go awry they must instead work together to stop the villain Ultron (James Spader) from putting his plan into action. 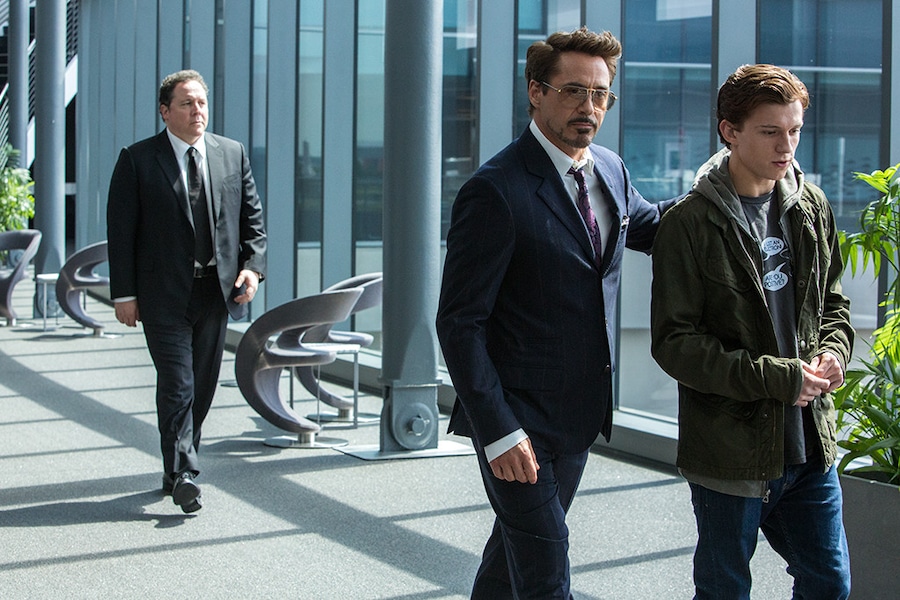 As a young Spider-Man's mentor, Downey continues his role as Iron Man in this 2017 Marvel film. As Peter Parker AKA Spider-Man (Tom Holland) tries to navigate high school and his super powers, Iron Man is there to show him the way. 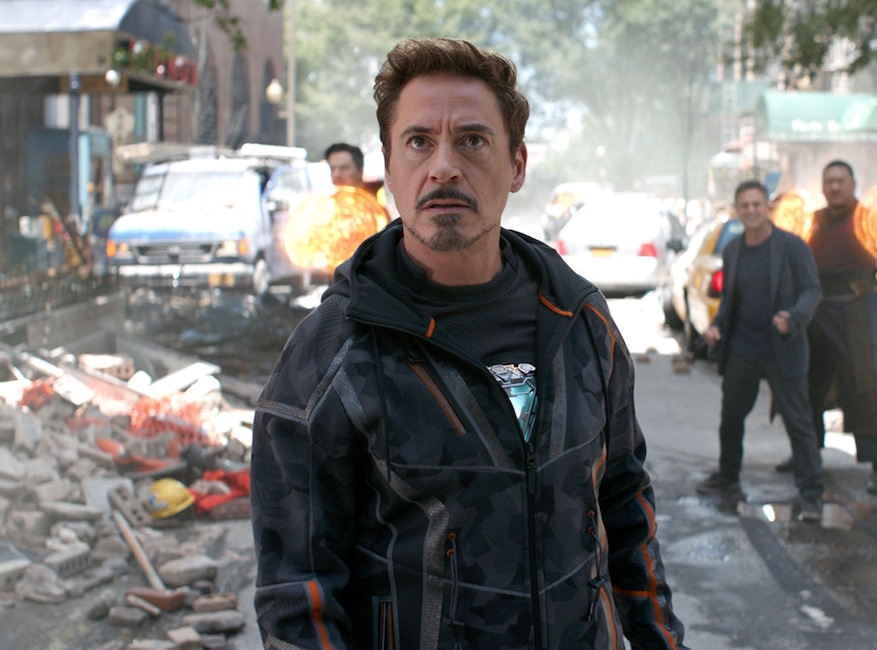 This 2018 superhero film smashed records, grossing over $2 billion, with Downey playing his well-known role of Iron Man once more.

In this installment of the Avengers franchise, the Avengers and their allies team up to try and stop Thanos (Josh Brolin) from ending the universe, even if it means dying in the process. 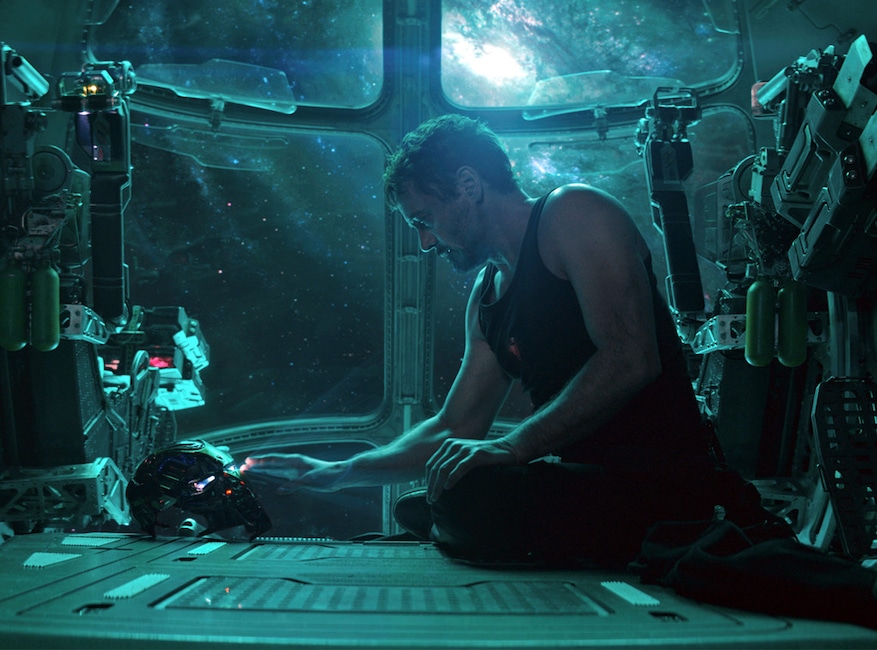 In April 2019, the final installment with this group of Avengers hit theaters and closed the Downey's long-running chapter as Iron Man.

In the Marvel flick, the Avengers and what's left of their allies team up once again to undo all of the havoc and destruction that Thanos (Brolin) has caused...and hopefully restore the universe to the way it once was. 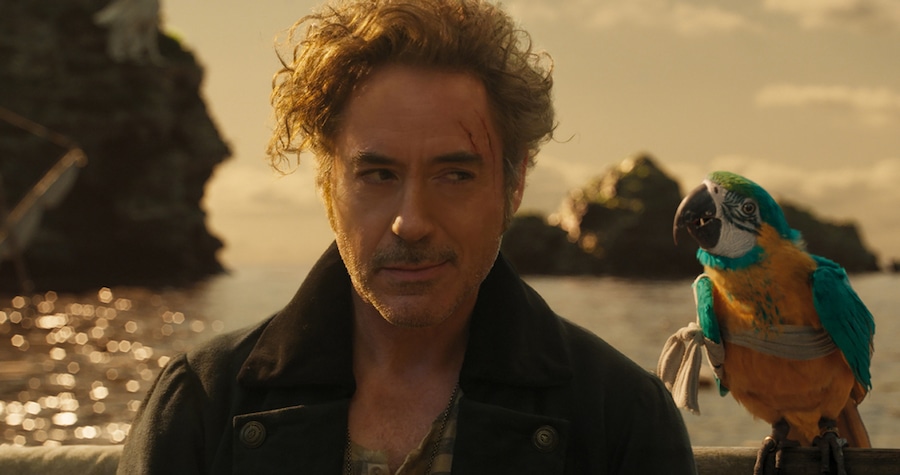 Downey's 2019 iteration sees the veterinarian (who can speak to animals) go on a mission across the world assisted by various animals voice acted by celebrities like Rami Malek, Craig Robinson, Emma Thompson, Octavia Spencer and more.