Justin Bieber Turns 25: Look Back at His Evolution 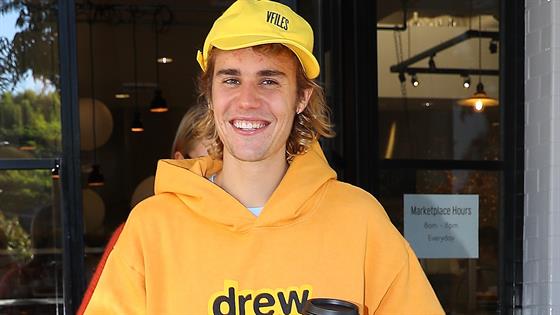 Can you believe Justin Bieber is 25 years old?!

The singer celebrates his birthday on Friday, although it seems as if it was just yesterday that the pop star was sporting long, choppy hair and serenading fans on YouTube. When the Canadian singer was 12, his now-manager Scooter Braun discovered his YouTube videos and showed them to Usher, who became his mentor and helped him get a record deal.

In 2010, at age 16, Bieber's breakout hit "Baby" became the most-watched music video on YouTube, the platform where it all began. More than 2 billion people have watched it to this day. Since then, Bieber has released almost a dozen top 10 songs, including No. 1 hits "Boyfriend," "What Do You Mean" and "Sorry."

In 2014, Bieber underwent some legal turmoil—he was arrested on suspicion of DUI and drag racing and avoided a jail sentence. In a separate incident, he was charged with misdemeanor vandalism for pelting a neighbor's home with eggs. He got probation and paid the neighbors $80,000. Also that year, video footage of him urinating in a bucket while cursing out former President Bill Clinton went viral. Bieber later apologized. 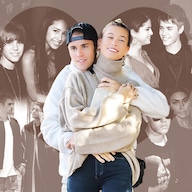 Fans stuck by Bieber despite his troubles. In 2016, he embarked on his Purpose world tour and canceled it abruptly a year later. A source told E! News at the time that Bieber was "burnt out" from his constant touring.

Bieber's love life has also made headlines; His on-again, off-again relationship with Selena Gomez ended for good in early 2018. Months later, he stepped out with another former flame, Hailey Bieber, and shocked fans when it was revealed the two had gotten engaged amid their whirlwind romance. Fans were shocked even more when in September, the two went ahead and tied the knot in a courthouse ceremony. The two plan to have a larger wedding celebration in the future.

Check out photos of Bieber's evolution: 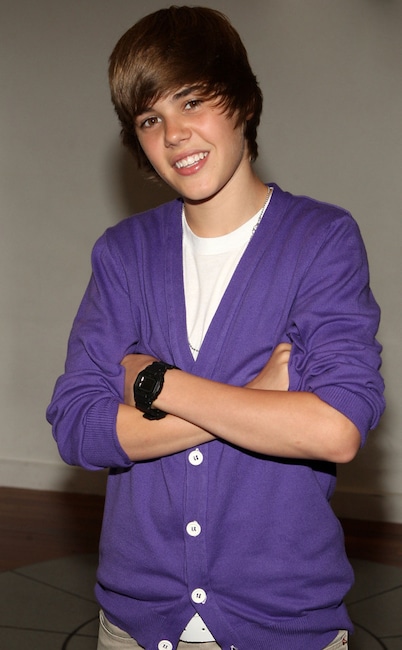 The singer appears at the Nintendo World Store in New York City. 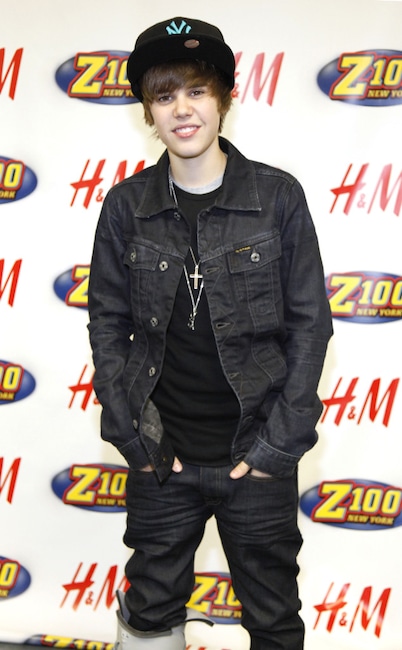 The Biebs looked as cute as a button in 2009 on a night out in NYC. The singer decided to rock double dark denim, a New York cap and some custom bling to add some superstar shine. We're sure every girl was swooning over the young star this night. 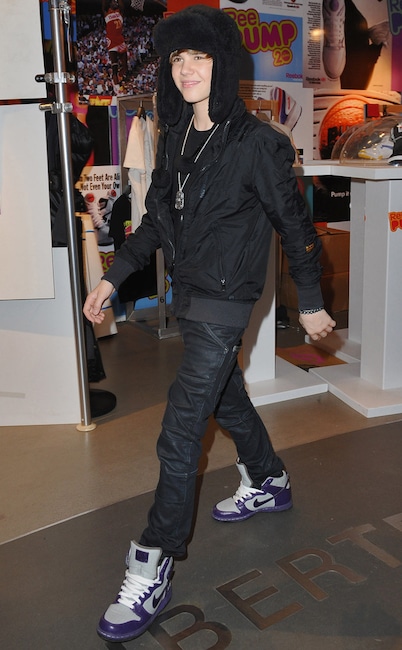 Looking extra cozy, the Canadian star arrived to greet his fans back in 2010 in this all black leather coat, black jeans, purple Jordan sneakers and the classic Eskimo hat. Is it hot in here or is it just JB? 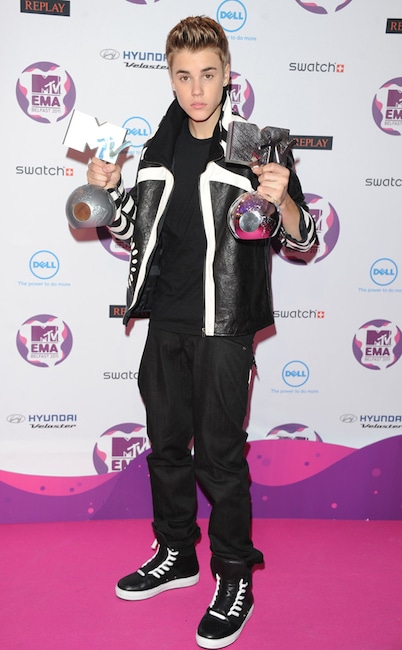 There's nothing like a hair flip to really change a guy's look. The mega-star looked red-carpet ready in 2011 with this swooped-back hairstyle, a black and white leather coat, loose trousers and black and white sneakers. 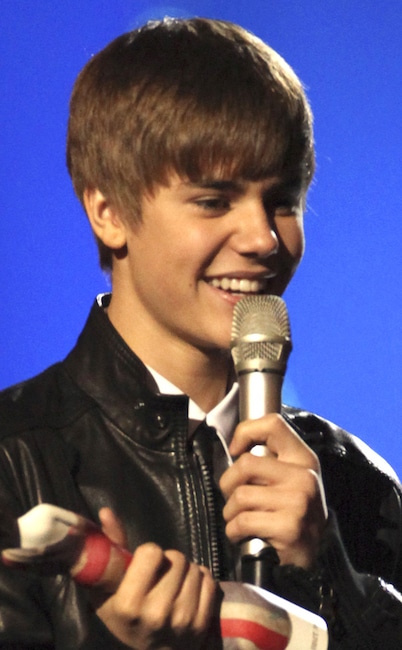 Bieber reacts after receiving the award for International Breakthrough Act on stage at the Brit Awards. 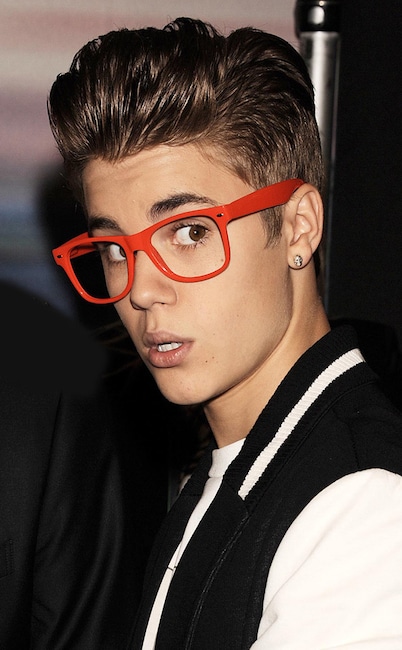 The Biebs rocks a different kind of look. 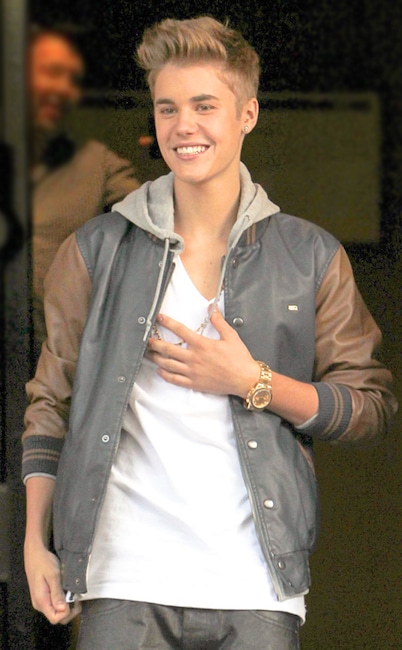 The singer greets his fans outside his hotel in Auckland, New Zealand. 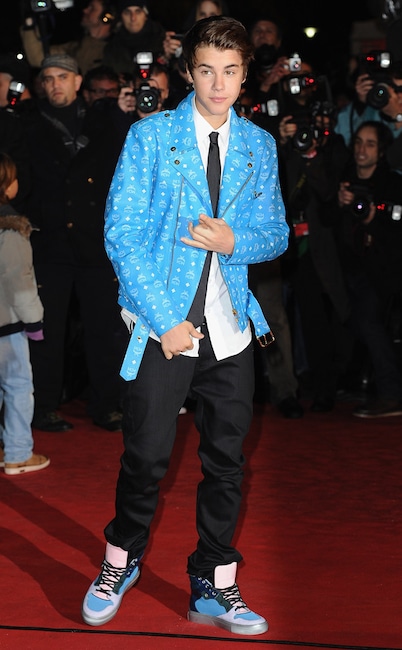 Yep, 2012 was the young hit maker's year. Bieb's arrived to the NRJ Music Awards in style with this bright blue MCM jacket paired with jeans, a white button-down and tie and multi-colored blue dunks. 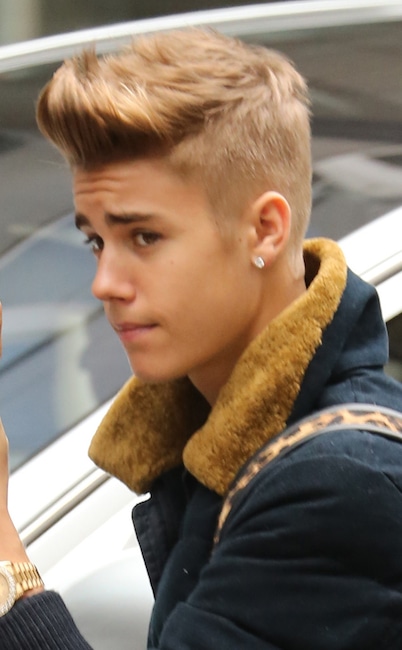 The singer throws up a peace sign to his fans at his Just Getting Started'book signing in London. 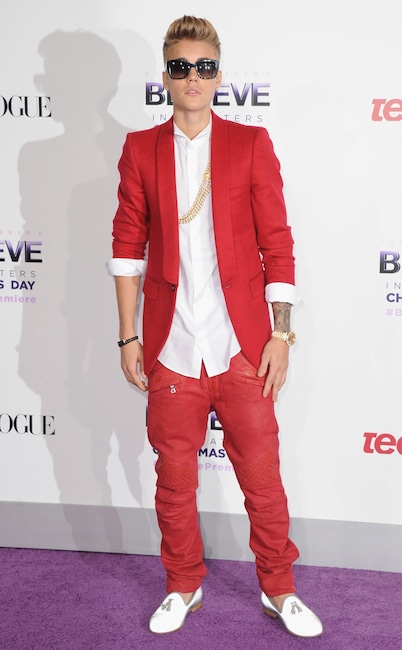 The star turned up the heat in 2013. JB was looking extra hot in this fire-red blazer from Balmain, red pants and cream loafers from Del Torro. The singer took a moment to show off some new ink and new jewels you just can't miss. 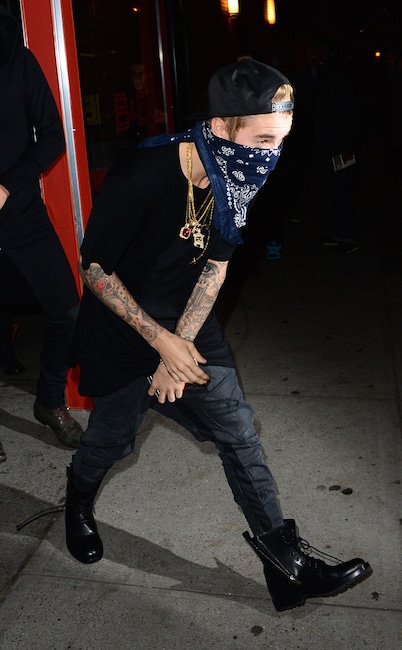 The star was all for street style back in 2014. JB decided to drop some flavor into his style wearing this navy blue bandanna, sagged jeans, a black-oversized tee and a slew of golden chains. 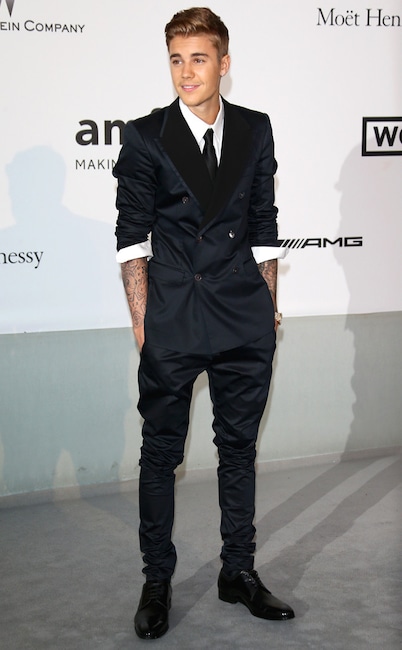 Looking like the perfect date for a date night, in 2014 the star went for a classic gentlemen look in this all black silk-embellished suit. 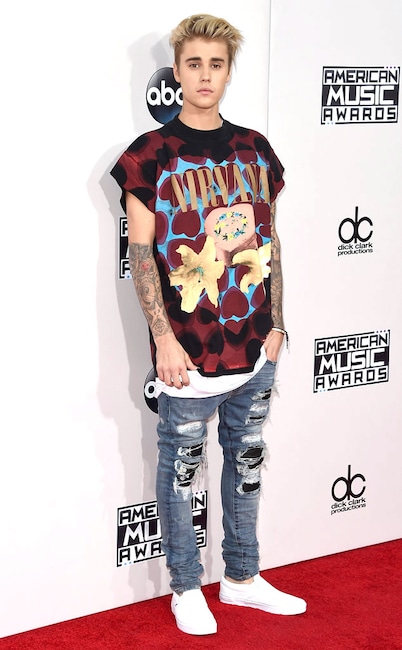 By 2015, Bieber was no stranger to red carpets. He brought his street style to the awards wearing blue jeans, a graphic tee and white sneakers. A few tattoos never hurt either. 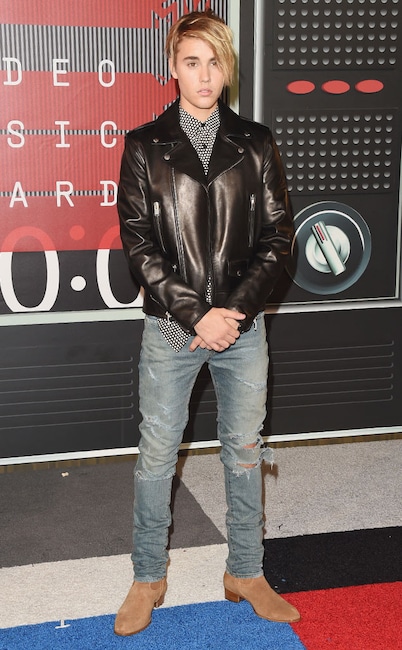 Bieber was the epitome of male chicness in 2015. The signer paired a dark leather coat, a black and white pattered button down, jeans and brown suede shoes to make for the perfect business casual look. 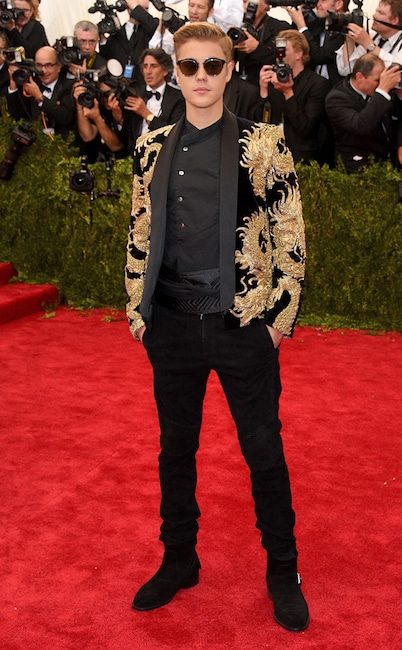 JB made it a point at the 2015 Met Gala to have all eyes on him. This custom Balmain jacket paired with a black suit ensemble stole the show and made Justin the talk of the tabloids. 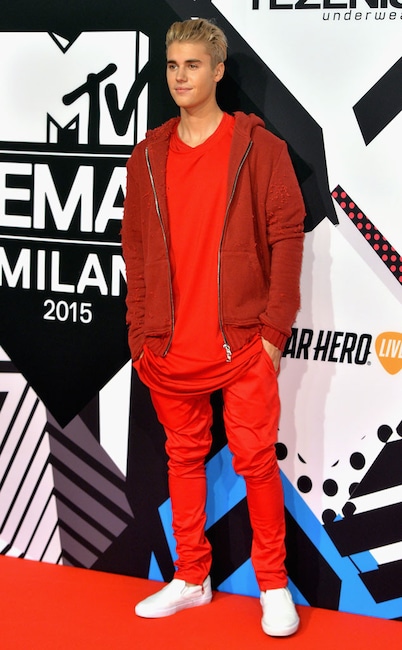 Th singer took a rather chill approach at the 2015 MTV EMA'S wearing a red cotton jacket, red joggers and an oversized red tee. 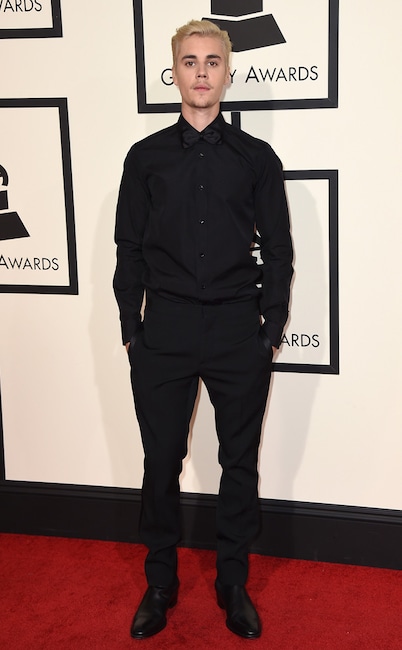 The singer arrives at the 58th annual Grammy Awards. 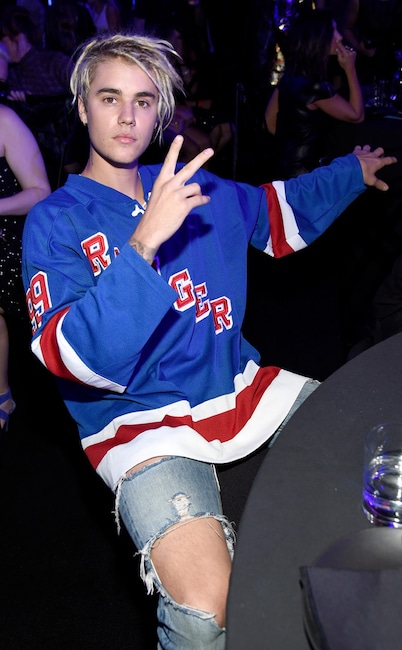 In 2016, this celeb was always down for a hair makeover. The "Where Are Ü Now" singer unveiled his blonde twists at the iHeartRadio Awards wearing a vintage blue and red hockey jersey and a pair of ripped jeans. He made chill look so good. 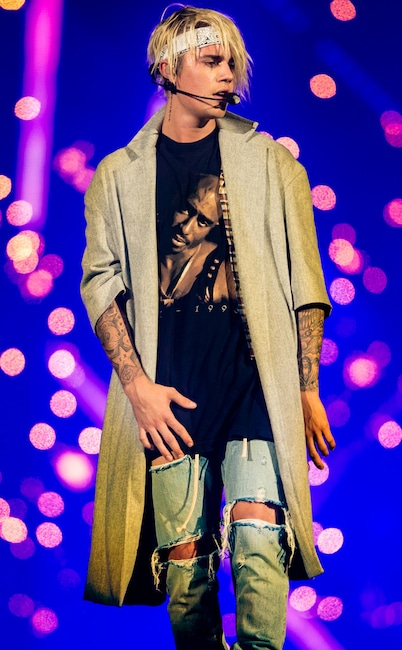 The performer took the stage in 2016 and wowed the crowd with his vocals and style. The artist let his blonde locks hang and wore a tan trench coat, ripped jeans and a Tupac graphic tee. 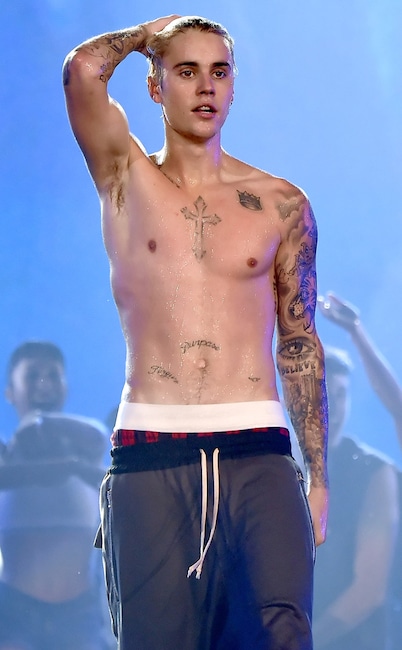 The singer and songwriter wasn't afraid to show a little skin in 2016. Bieber bared all of his body art for the world to see wearing only loose gray jogger pants. 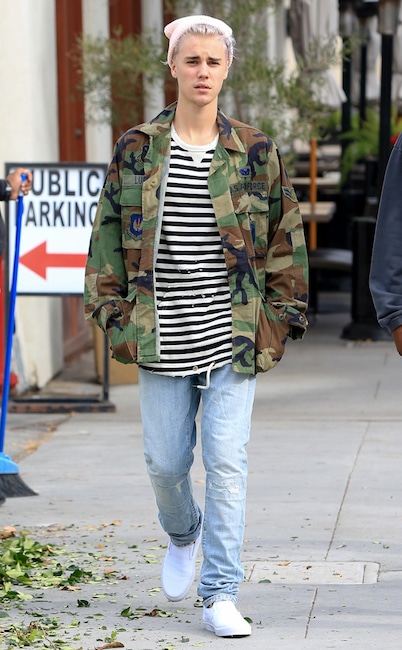 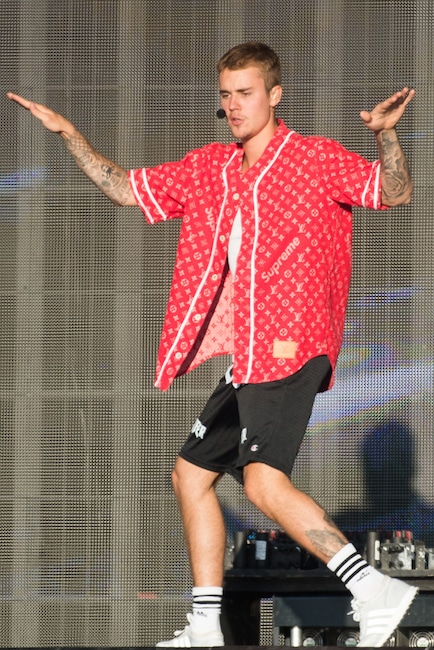 He's still got it. The pop star played it loose and fun at this 2017 performance wearing a Supreme button-down, black shorts and Adidas sneakers. 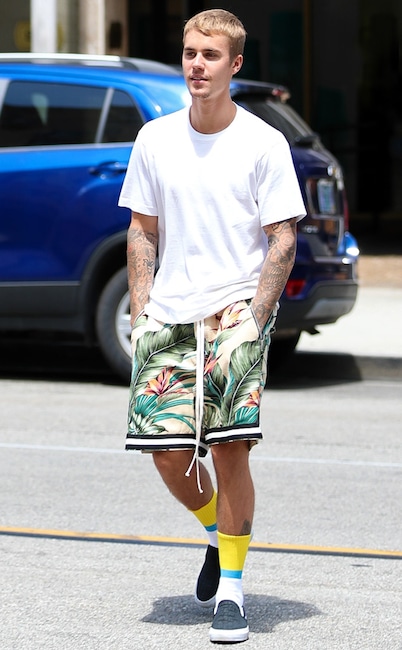 JB looks cool and breezy in this tropical look. The star wore multi-colored trunks, a white tee and yellow and blue socks for a pop of color. Justin gave major summer vibes in 2017. 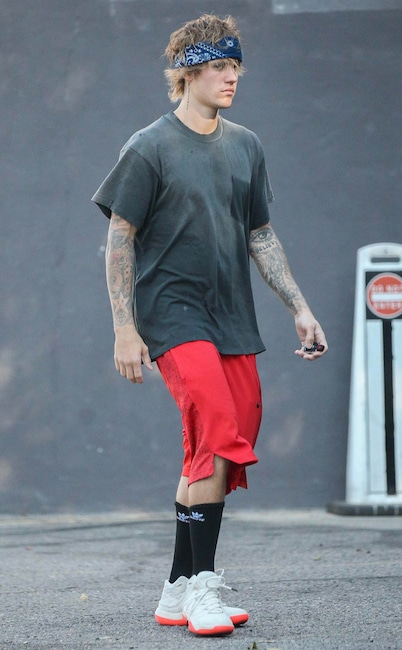 In 2018, the heartthrob was seen sporting a rather sporty workout look in this gray tee, red basketball shorts and a blue bandanna. Probably the hottest workout partner we've seen thus far. 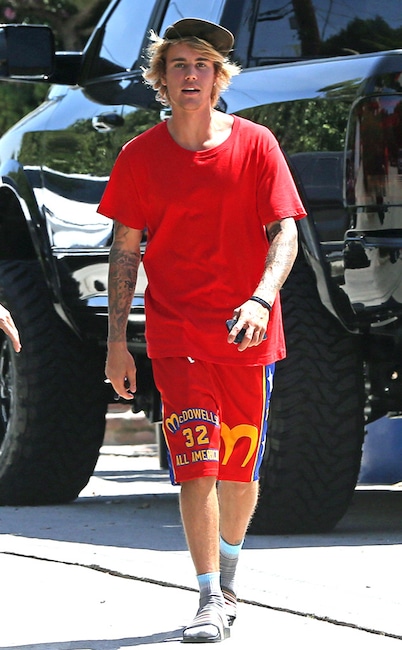 The star was spotted in 2018 looking extra chill sporting some grey slides, a red tee and a pair of vintage McDowell's Bermuda shorts featured in the 1988 film Coming to America. 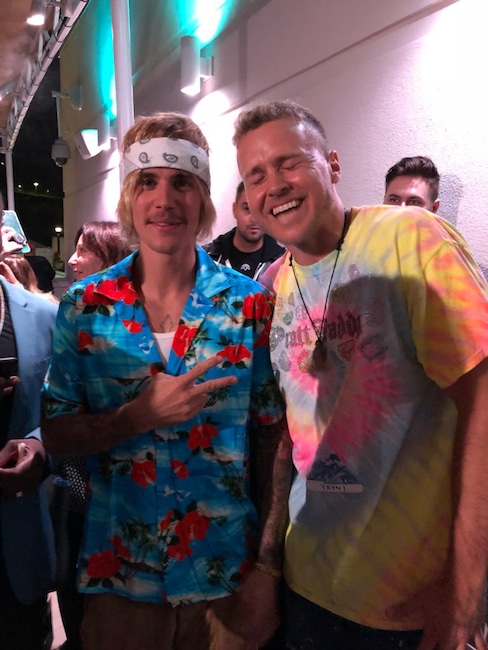 Bieber is more of a fashion rebel in 2018 more than ever. The singer posed next to Spencer Pratt wearing a loose tropical-print button-down, tan bottoms and an eye-catching white bandanna to hold his blonde mane of hair. 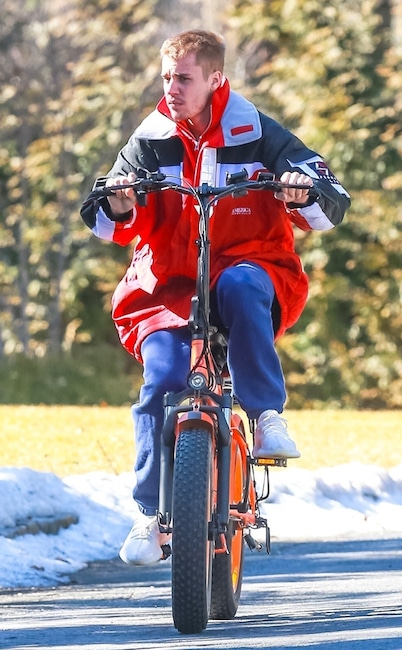 The Biebs goes for a ride.

Don't miss E! News every weeknight at 7, only on E!