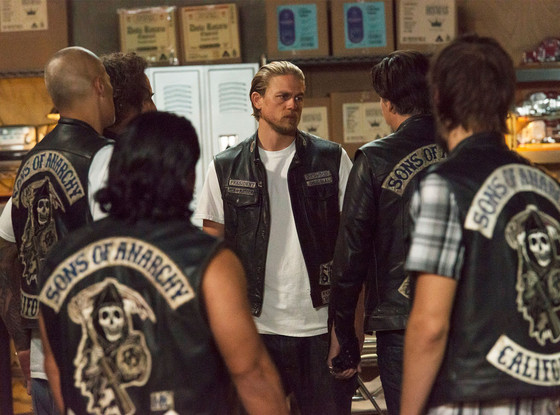 How's that Sons of Anarchy hangover treating you?!

If you're anything like us (and you played our dangerous drinking game while watching the series finale last night), you're probably suffering from both a physical and emotional hangover today. So pop some advil and chug some water, because we're about to ease the pain of watching (SPOILER ALERT) Jax Teller (Charlie Hunnam) commit suicide by way of head on collision with a truck...with a post-mortem interview with Sons of Anarchy executive producer Paris Barclay!

Barclay carved some time out of his busy schedule to talk all things "Papa's Goods," including why Jax had to die and couldn't just ride out of town into the sunset in order for the whole series to come full circle. Check out our Q&A with him below!

MORE: The Sons of Anarchy series finale ended with a bang...and a crash

E! Online: I just need to start simply by saying this: that finale was incredible.
Paris Barclay: It did us all proud.

How has the fan response been to the finale so far?
It's been pretty effusive. I was most personally gratified by my friends at E! Online, do you know them at all?

You know, I think I might have heard of them.
They put us at fourth of the best series finales of all time!

And that ranking came from the fans!
That was a fan vote! Wow! That makes me really happy. I'm on Twitter right now and it's crazy. People are just going nuts for it, and most people really got it, the mythological ending we wanted for the story.

MORE: Kurt Sutter and Charlie Hunnam sound off on the epic SOA finale 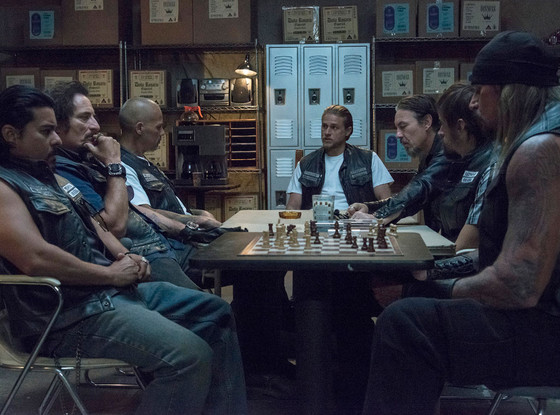 What surprised you the most about how the fans feel about the finale?
What surprised me the most is when they disliked it, what I hear in their voice is largely the sadness of losing these characters and their expectation that Jax would die and their disappointment that that's what actually happened. I want to reach out to them and say, "Yo, what we're writing here is a tragedy. It's always been a tragedy in the Shakespearean or Greek sense. It has to end tragically and we all knew that when we were getting into it."

I knew that he wasn't going to end up at a carnival buying snow cones for his sons and that was the last shot. I always knew this was going to end badly. A lot of people are pissed that it's over and the way they're channeling it is, "I'm so pissed that [creator Kurt] Sutter did exactly what we thought he would do and kill Jax!" Well, spoiler alert, Hamlet dies in the end too, I hate to tell you. In tragedies, generally the hero dies. That's a given! How we get there is the fun part of it and I think we got there in a way that was had action and amusement—not amusement in the sense of ha-ha-ha, but amusement in the sense of heart-tugging, touching stuff.

Even though you have called it a tragedy since the beginning, and we knew there was no way Jax could ever get a happy ending, did you ever discuss the possibility of having him just driving off out of town at the end and not killing himself?
Would that really be a tragedy then?

PHOTOS: The best and worst series finales of all time

He still would have lost his family, his club, his friends and everything that really mattered to him, and he would have been all alone. That would have been heartbreaking too!
I think that would have been tragic, but that wouldn't be a tragedy. A tragedy, going back to my English training here, actually usually ends in death of a major character. Now, he could have been shot by all the cops, he could have been done in by Nero [Jimmy Smits] as I'm seeing some people suggesting, someone thought Abel was going to get an Uzi and kill his own father the way Jax killed Clay [Ron Perlman], a lot of people had a lot of theories about tragic endings for Jax.

This was on his own terms and the way he went out was part of his plan to ensure that his sons hated him. A lot of suicide is meant to aim at other people where Jax's suicide was aimed at making his family hate him. He's guaranteed that when his sons find out what happened when they're older, they're going to loathe him, and Nero has been instructed to help them on that path so they don't end up on the same path as Jax. It's finally breaking the cycle. 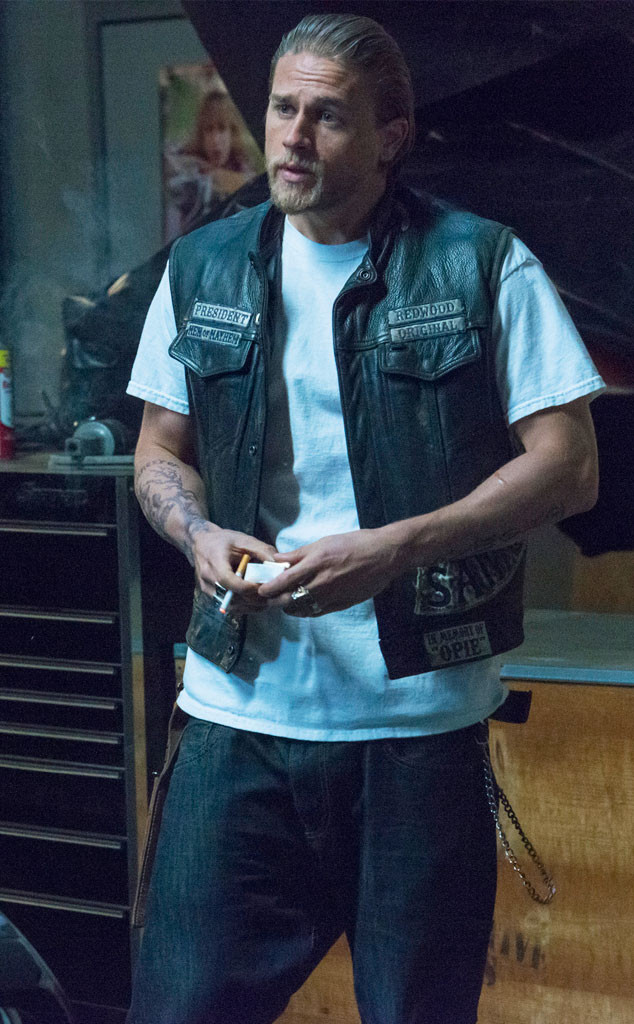 Speaking of breaking the cycle, that final scene really brought everything full circle when Jax went out the same way his father did. When you saw the final version of the final scene play on screen for the first time, how did you feel about how it turned out?
I think we should have spent more time on the visual effects. That's the first thought I had. [Laughs.] Literally that was the first thought! But emotionally, when he raised his hands off his bike, and the look of serenity came over his face, I thought it was incredibly moving. That's just Charlie Hunnam's brilliance. And even that little look when he first saw the truck was amazing and subtle and great.

Why did you decide to have the driver of the truck be Milo (guest star Michael Chiklis), instead of just some random truck driver that we never met before or even not even shown onscreen?
Isn't that special? We have this thing on the show that because of the decisions you make, everything has ramifications, and even the simplest decision can have these huge consequences that you'll never see coming. Milo decided to help Gemma [Katey Sagal] get to her old man's place which was a little out of his way and took him off his route. Now, coincidentally, he's later coming down the road than he was supposed to be when he encounters Jax, and we just loved the butterfly effect of that.

MORE: Katey Sagal and Theo Rossi sound off on that Sons of Anarchy bloodbath

Was there a character that made it to the end of the series alive that you thought was for sure going to die?
Actually, I think every character that died actually lasted longer than they should have, and that's because we just loved their characters so much. Juice [Theo Rossi] lasted a lot longer than he should have, and he could have gone a few episodes sooner but he needed to be the one to tell Jax for sure what happened the night of the murder. And I think even Tara [Maggie Siff] should have gone sooner, but that wouldn't have propelled us into the finale like it did.

On the flip side of that, was there a character that died at any point throughout the series that you wish had made it to the end alive?
Oh, that's a really good question! I really was big into Filthy Phil [Christopher Douglas Reed]. I was very sorry to see him go. But there was no better actor in terms of her demeanor, what she was able to do, and how the crew felt about her than Maggie Siff. That was very difficult to see her go. It was good for the story but bad for us as a family. I was glad August Marks [Billy Brown] made it as long as he did but Harold Perrineau was amazing too, and I was sorry he had to go but he had to die out of vengeance for what he did to Tig's [Kim Coates] daughter.

MORE: This Sons of Anarchy drinking game is dangerous 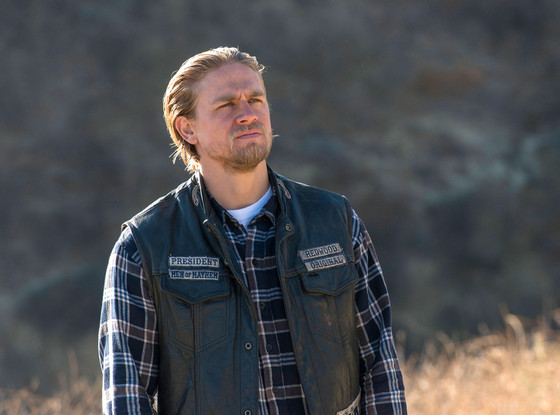 If you could give one message to the fans who have been with the show since the beginning in the wake of the finale, what would that message be?
Just like Jax, we did it because we love you. Love is really the driving force and that's why we showed that Hamlet quote at the end. Despite that it also included a lot of vengeance and things that seemed to be hatred and spiteful, generally these people did the things they did out of love. They may have been right or wrong, but I know we were right, because we did it because we love telling stories that are going to shock, surprise, entertain, amuse, and I hope we accomplished that. We didn't do this just for dough, or to amuse ourselves, we did it for you. We love the relationships we've had with the fans. If you're ever wondering if our motivations were for power or self-aggrandizement, it's actually to entertain you and to tell you how much we love you.

Well, as a fan, I want to say thank you so much for an incredible final ride. I know I'm going to watch this finale over and over for years to come.
So am I! But I'm going to wait until the new year, give it some space.

CLICK: The most important deaths on Sons of Anarchy