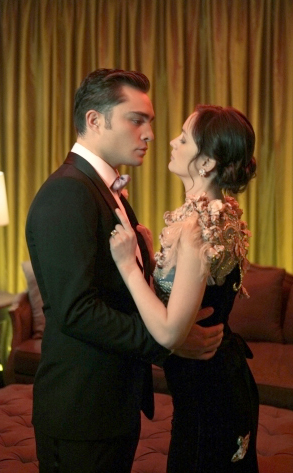 We just talked to executive producer Josh Safran about last night's shocking scene between Chuck (Ed Westwick) and Blair (Leighton Meester), and as Safran puts it, "We feel it's very important to know that she is not scared—if anything, she is scared for Chuck, and what he might do to himself—but she is never afraid of what he might do to her. Leighton and I were very clear about that." Moreover, the Basshole is due for a "reckoning," just as soon as he comes to his senses, which will take in the midst of the "thrilling" and "uplifting" two-part finale.

Will Blair get her fairy tale? And who is the prince in question? That guy from Europe or, as Serena (Blake Lively) pointed out, that guy who has his own Upper East Side Empire?

Here's what we can tell you:

I thought it was interesting that Chuck actually grabbed her and that the consequence of that fight was Blair had the most perfect, beautiful, dainty injury, which are two symbolically significant things. Did this moment verge on abuse? What was going on in this scene?
The way we viewed it, I think it's very clear that Blair is not afraid in those moments, for herself. They have a volatile relationship, they always have, but I do not believe—or I should say we do not believe—that it is abuse when it's the two of them. Chuck does not try to hurt Blair. He punches the glass because he has rage, but he has never, and will never, hurt Blair. He knows it and she knows it, and I feel it's very important to know that she is not scared—if anything, she is scared for Chuck—and what he might do to himself, but she is never afraid of what he might do to her. Leighton and I were very clear about that.

Chuck is usually defined by his cold, emotional distance, but here he's out of control and slobbering drunk. What is he doing?
This whole season has been a struggle for Chuck to understand who he is...He opens the season as Henry Prince, because he did not want to be Chuck Bass anymore. Even when he got surer footing, and he was like, "OK, I can be Chuck Bass again," he was dealt another curve ball, the story with his father and the Thorpes, and looking at, "What am I born from?" The conflict for the year for Chuck has been "Who am I? What am I?" And you have to hit rock bottom before you can rise up again. That is our trajectory for Chuck, right now, and for this season.

Is this rock bottom, or is there further to go?
I would like to say "Wait and see," but I would be hard-pressed to think that there is any more rock bottom than this. And by the way, it was a conscious decision to make the rock bottom episode 20 and not 22, so that there's still room to go.

I have to imagine that the morning after he's also going to look at Blair and see that he caused the world's most picturesque wound and react to that accordingly. Where do you go in the next two episodes in terms of Chuck's emotional arc?
There is definitely a reckoning.

"Reckoning" could mean a lot of things. Is Chuck going to be in a gunfight?
I can't say, but you saw who Raina (Tika Sumpter) called at the end of the episode. There's two things that we've shown that can touch Chuck's Achilles' heel, and they are Blair and Jack Bass (Desmond Harrington). And to have both of them in the same episode, what's that gonna be?

Ah, Chuck…He's such a classic romantic hero, like Rhett Butler, sort of strong enough that you can stretch him pretty far.
Sure, we talk about these classic movies all the time, and sometimes the audience just likes it better when it's The Philadelphia Story, or Breakfast at Tiffany's, but you have to talk about these other movies as well. Each character can't just be in romantic comedies all the time.

He's always had that Gothic thing, and those guys are always imbued with a dark side in addition to their vulnerability about their girlfriends. Would you say that the next two episodes are a time of strength for Chuck or a time of weakness?
All I will say is that I'm sure you've seen the picture of Chair on chairs. That's not a dream sequence; they're smiling, and you know…How about that?

Where's Blair, emotionally, at this point? She's with her prince, but Chuck said to her face that we all knew she wasn't going to get with him—plus, he's just a guest star. What is she telling herself at the end of this episode?
Blair's always believed in fairy tales, and she even opens this season talking about fairy tales. It was always our intention to let Blair have a fairy tale, but the rose in a fairy tale still has thorns on it. Chuck may be—in last night's episode—the thorns for that rose; but Blair is moving towards accepting that she can have a fairy tale.

I'm hearing a lot of, "If you go back to the beginning of the season, you'll see that we did some stuff here." Can we assume that as fans that if we went back to the first part of the season, we'd see the seeds planted that are going to come to fruition in the finale?
Absolutely, it is very, very much of a piece, this season. We just made that choice and stuck with it.

As for the finale, do you like to end things on cliffhangers? Do you like to tie things up in bows?
The next episode is actually a two-parter, episodes 21 and 22 [are one story and] take place in a little more than one night. And then there's little bit more jumping ahead like we have in the past. There are definitely cliffhangers. I'm trying to think, do we tie stuff up in bows? Well, every bow has a string that someone can pull, some I'm not entirely sure if we tied up anything, but I feel like this year, more than ever before, the map of the next season will become very clear in the finale. So even when there are cliffhangers in this finale, they very much tell a story of where we are going, as opposed to shooting Chuck and not knowing if he's alive.

In that two-part, what one scene or moment are you most excited for people to see?
There's never one moment. You're asking the wrong person, because I'm proud of and stand by every storylines, even the ones that people don't love and the ones that don't get accepted the way we hope they will. I have to stand by both "the good and the bad." I really love both episode 21 and 22. Coming to the end of the season is always really fun for us, because we really do get to look back and tie things together...the only thing I'm sad about is that I wish they were airing on the same night, because I do think that 21 and 22—because they're the first time we've ever done a two-parter—are really complementary. At the same time, I would love to just be an audience member watching, because 21 ends on a cliffhanger. Watching and waiting a whole week could be superfun; we don't get that luxury because we know what's going to happen. There's lovely moments and thrilling moments in both parts, and I think it's really going to feel like a ride. Last year's finale felt like a descent into despair, because that's what was happening with Chuck and Jenny (Taylor Momsen); this one feels more like a thrill ride with happy uplifting moments and happy scary moments, but not necessarily despair.

Are you holding out hope for Chair, or are you suffering a little despair yourself? What can Chuck do to redeem himself? Share your thoughts on the future of Gossip Girl in the comments!

Gossip GIrl airs Mondays at 9 p.m. on the CW.