Turns Out Hunter Hayes Hid Some Truth From The Masked Singer The Astronaut on The Masked Singer told a little lie to get on the show. Warning, spoilers follow!

On the Wednesday, April 29 episode of The Masked Singer, the Astronaut was revealed to be none other than Hunter Hayes. To get on the show, Hayes said he wasn't entirely honest and hid some things from producers.

"In one of the questionnaires when you sign up, they ask you if you're claustrophobic. I've had both experiences. I've had experiences where I have zero problem being in a confined space, but I've also had, like, mild panic attacks being in confined spaces. But I didn't want them to know that. I won't say I lied, but I didn't really tell them about the potential for claustrophobia," Hayes told EW. 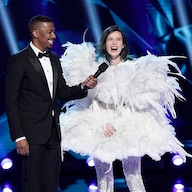 "Thank God it wasn't as bad as I thought it was going to be. I had an advantage with my mask. I could see almost everything. My view was great. It wasn't as hard to breathe in my mask as I knew it was for others in their costumes," Hayes said.

Only a handful of performers remain in season three of The Masked Singer, including the Turtle, Frog, Kitty, Night Angel and Rhino. See the season three reveals below.