Kobe Bryant Honored at First Lakers Game Since His Death: All the Details and Photos From Inside

Tonight is the night to celebrate the life of Kobe Bryant.

On Friday evening, the Los Angeles Lakers returned to the Staples Center for their first basketball game since the death of Kobe. They will play against the Portland Trail Blazers.

Before any ball was dribbled and shot was scored, the venue along with the NBA, teammates, coaches, fans and friends put together an inspiring tribute to celebrate the life of one legendary Lakers player. Usherstarted off the tribute by singing "Amazing Grace" for the audience. He was followed by artist Ben Hong, who played the cello during a tribute video. And before the game began, the Boyz II Men performed the "Star-Spangled Banner."

This was followed up by a speech from LeBron James, which you can read in full here.

Then, as the players went onto the court, Kobe's name, jersey number and high school was announced in lieu of the athletes'.

Ahead of the game, Frank Vogel told the press, "We're going to go out and play each game embodying what he stood for." He added they're "focusing" on the work, which he said is "mentally therapeutic" for everyone.

For those who missed out on tonight's tributes, we have all the details from inside the Staples Center. Take a look at just some of the many powerful moments in our gallery below. Gone But Not Forgotten

At one point during the in memoriam video, the men begin to cry as they remember Gianna and Kobe. 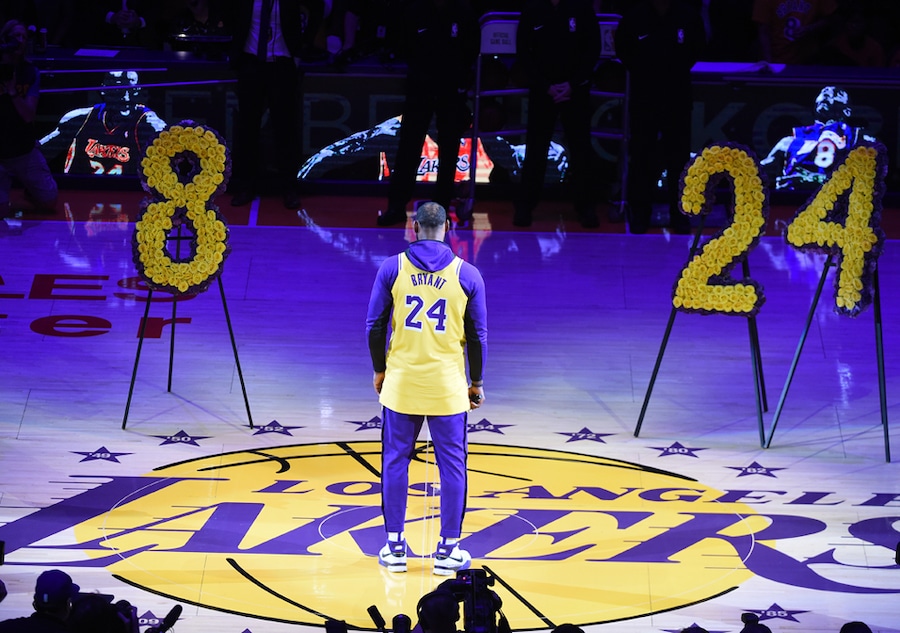 LeBron abandons his script to speak from the heart during a tribute to his mentor and friend. 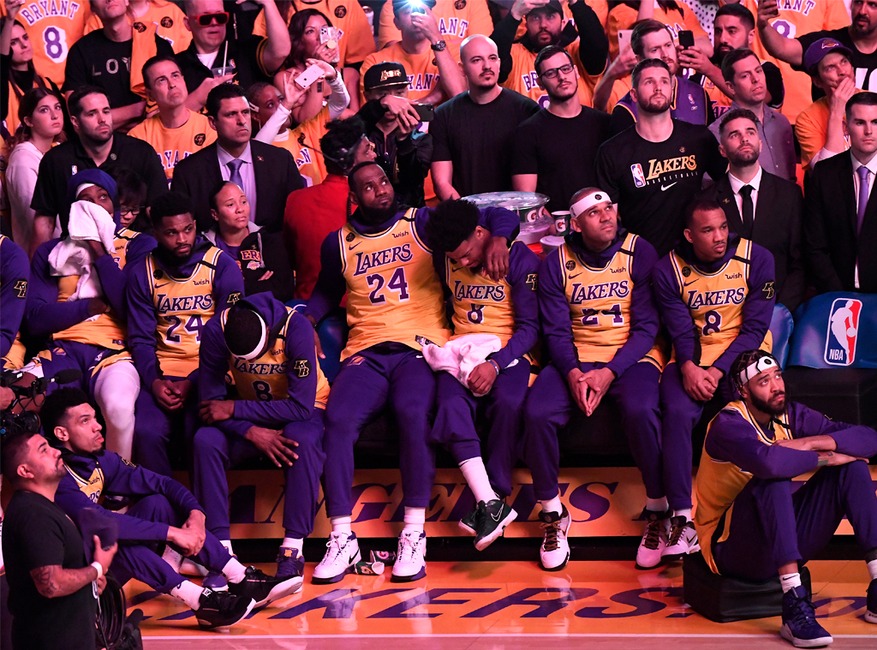 The Lakers team huddles together while watching the emotional tribute to their late former teammate. 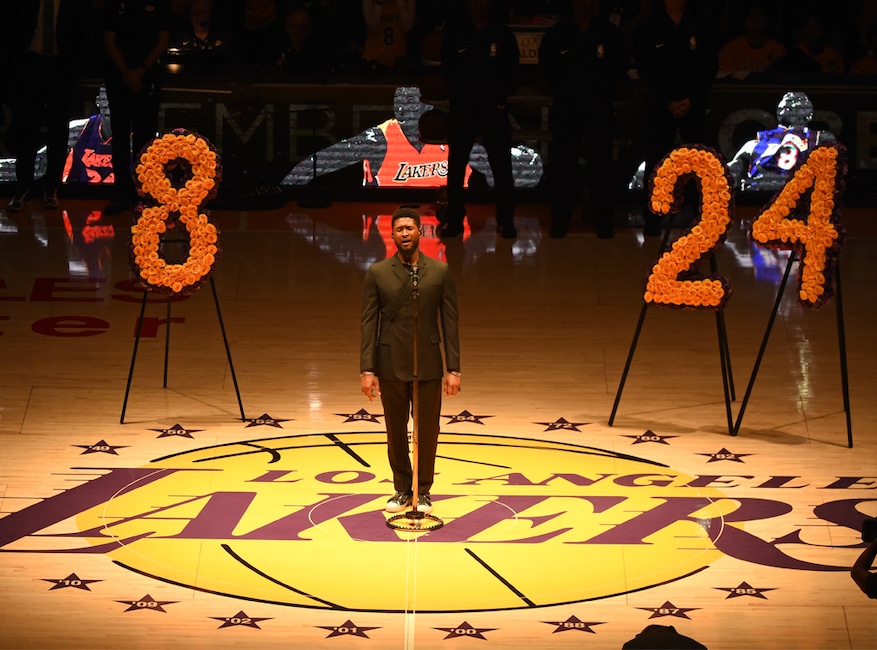 Usher delivers a somber yet powerful performance of "Amazing Grace." 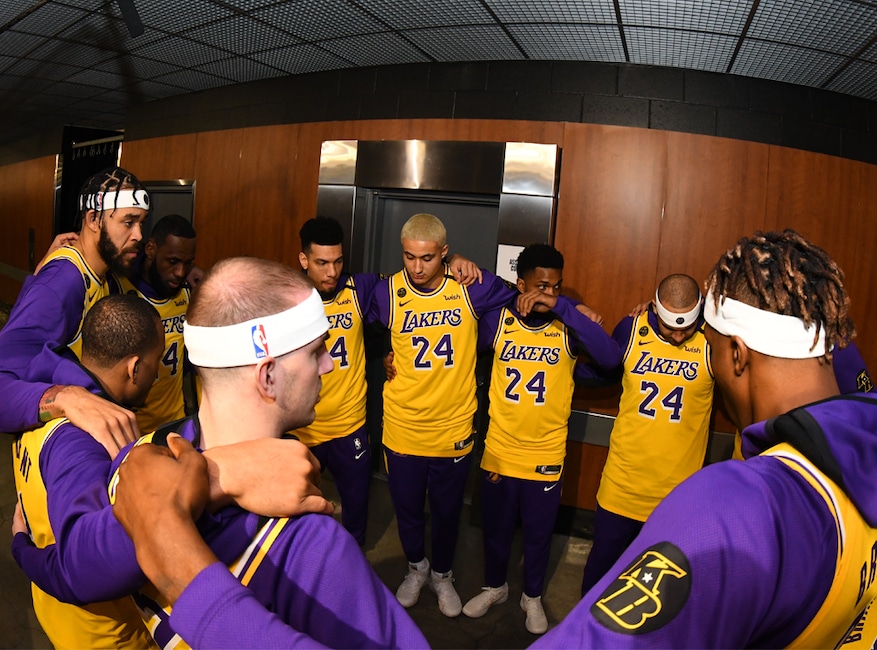 The Lakers huddle before tip off. 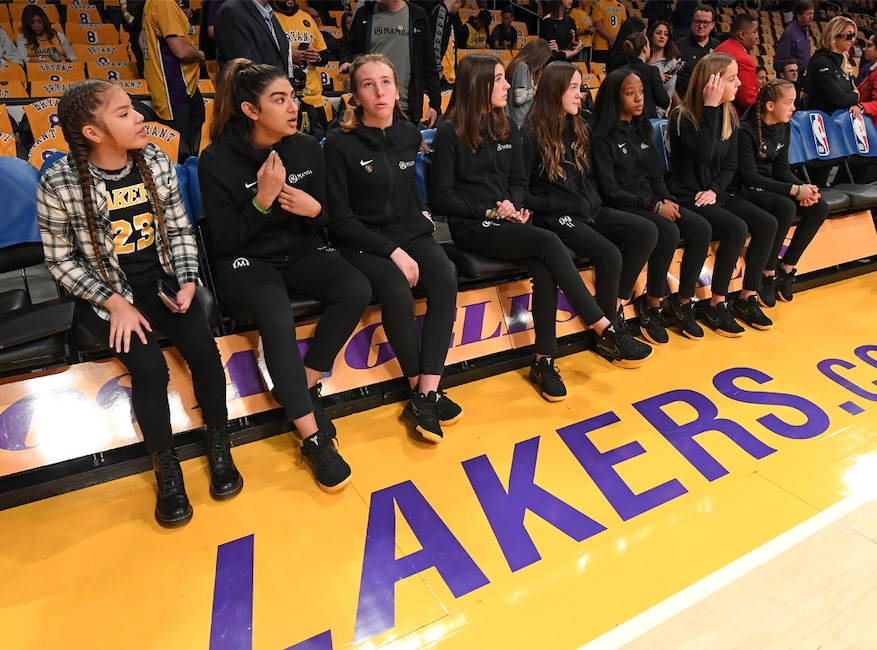 Gianna's teammates from Mamba Academy attend the Lakers game in memory of those who lost their lives. 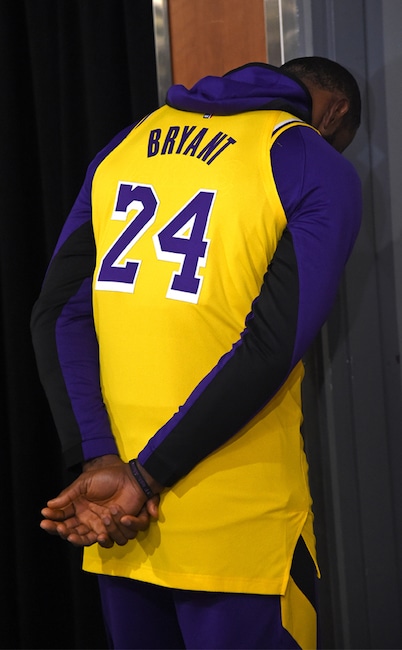 A Moment of Silence

Lebron bows his head in a moment of solitude. 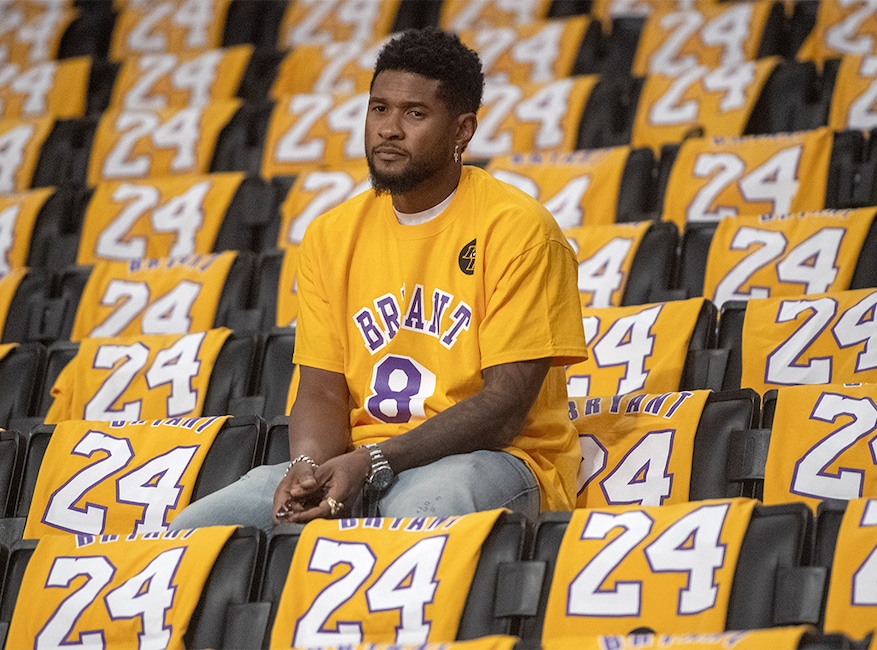 Stars from far and wide are attending the Trailblazers v. Lakers game in honor of Kobe and Gianna. 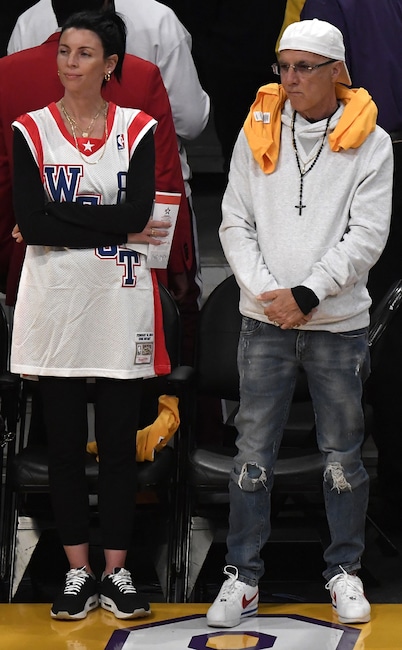 The music executive and his wife pay their respects. 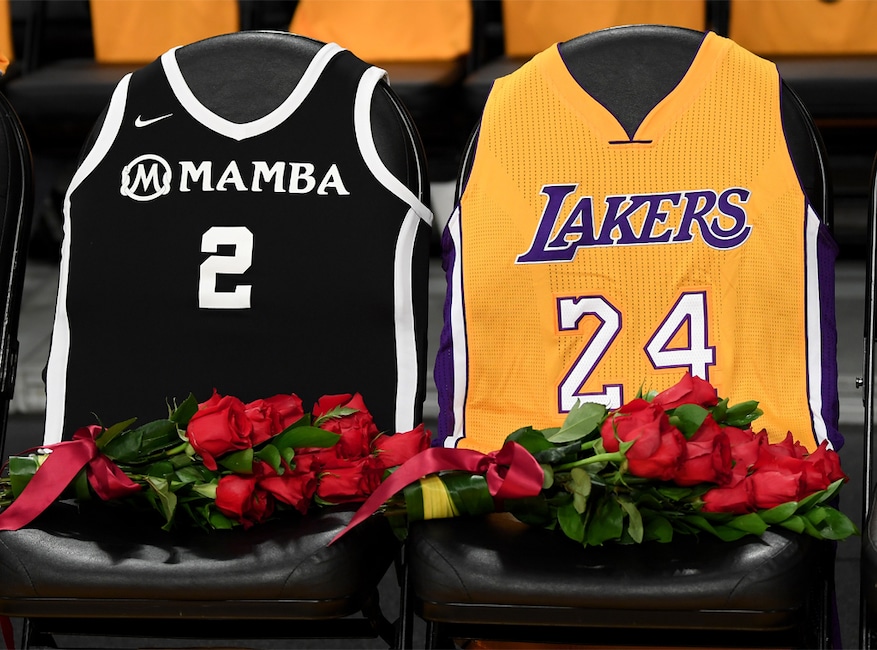 Kobe and Gianna's jerseys are placed on their seats, alongside bouquets of roses. 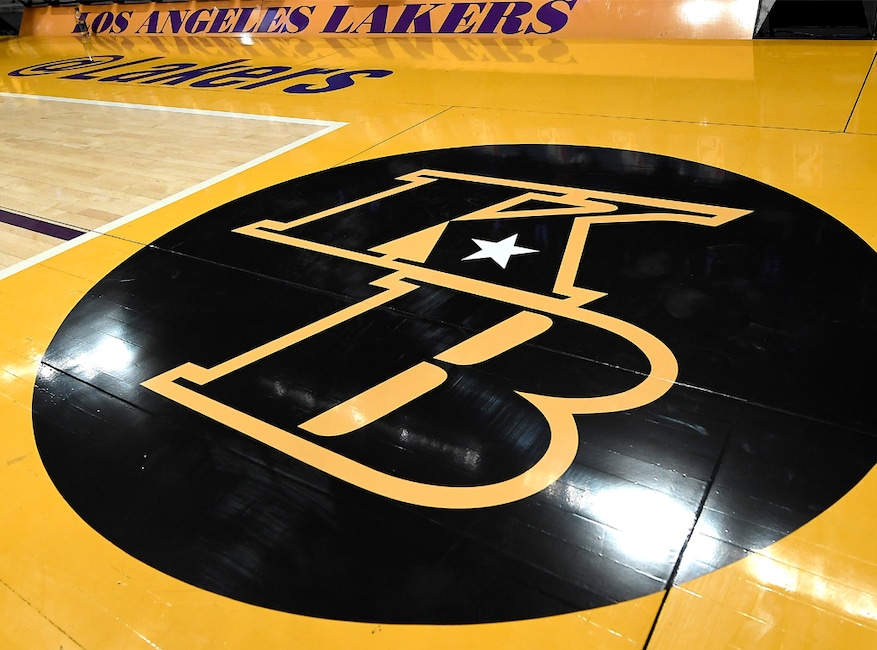 The Lakers emblazon Kobe's initials on the court. 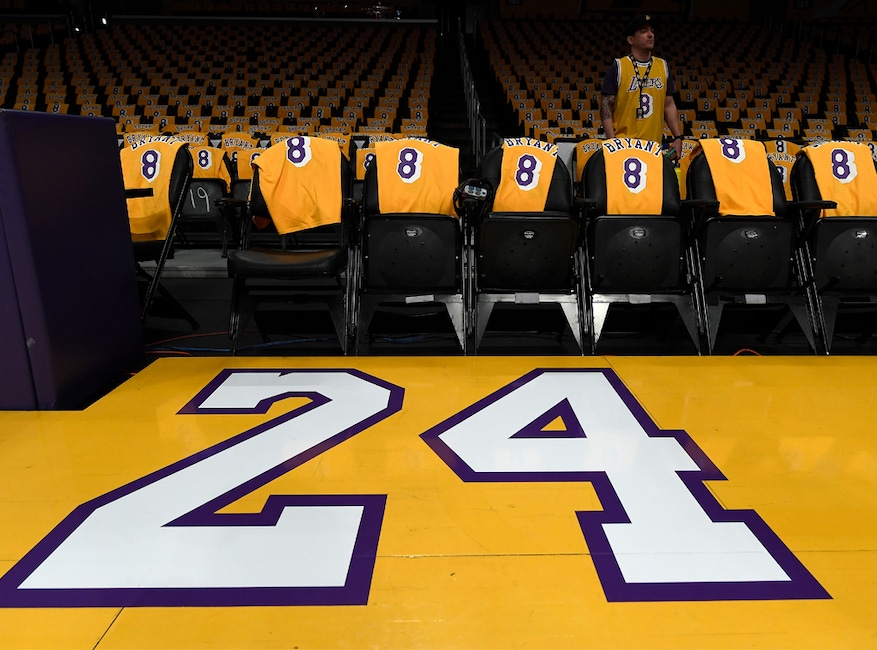 Kobe is honored with his number on the court. 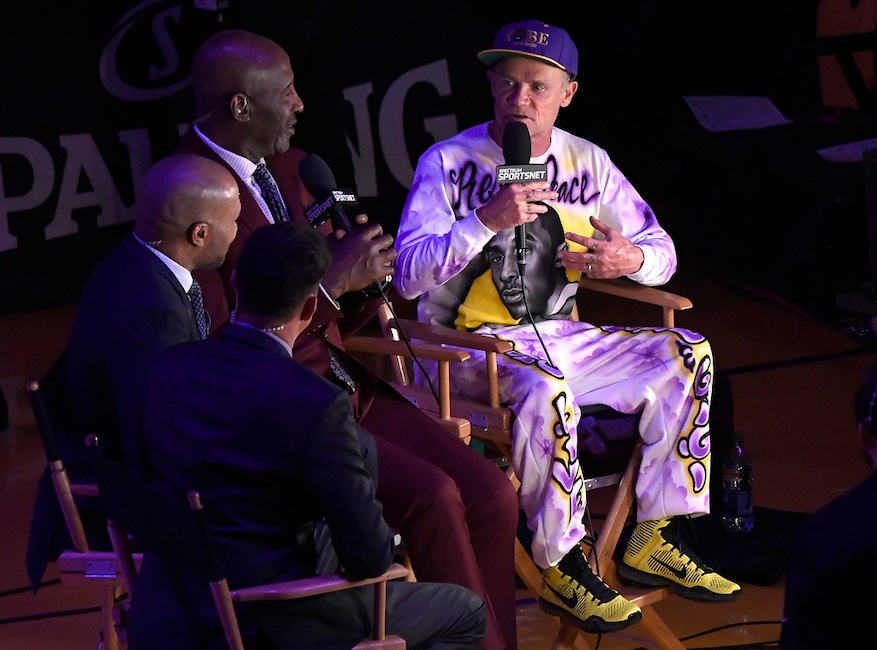 The Red Hot Chili Peppers' Flea makes an appearance in honor of the late basketball star. 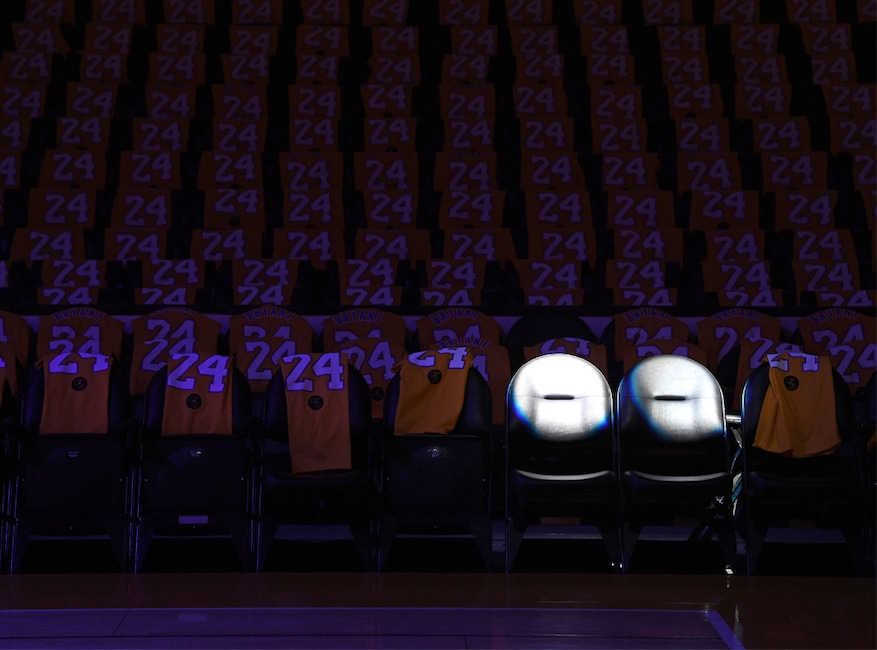 The Lakers leave two seats open for Gianna and Kobe. 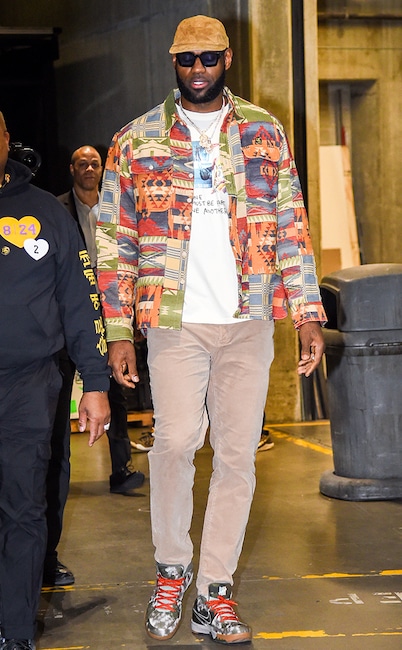 After a devastating week, the basketball star keeps his head high as he heads into the Staples Center. 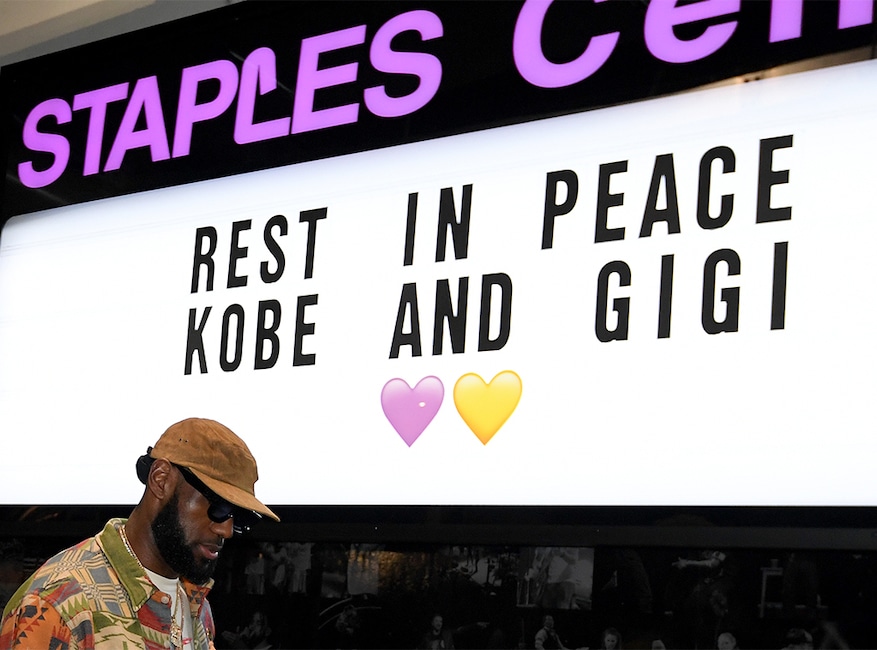 LeBron James arrives at the Staples Center ahead of the tribute. 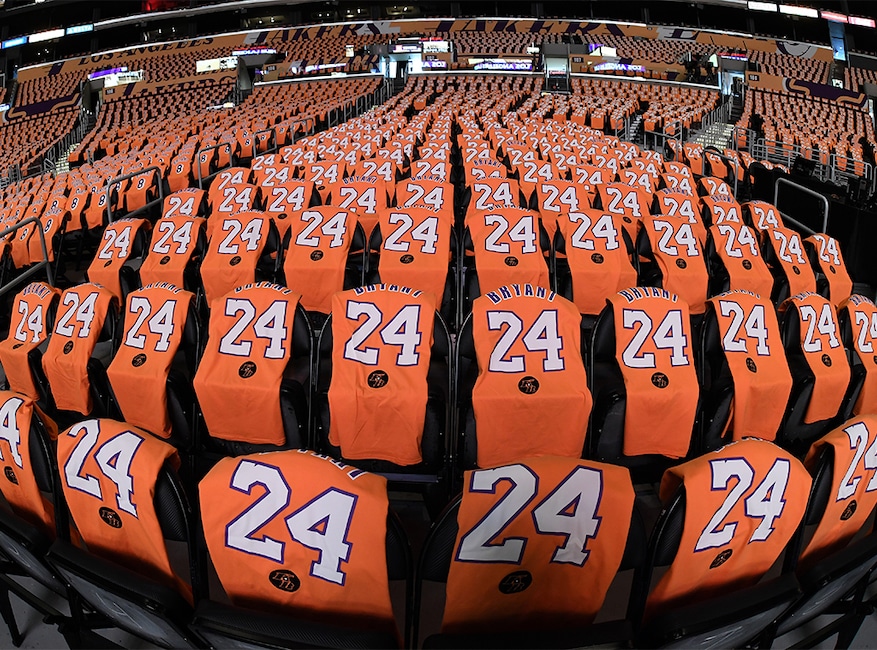 All attendees of tonight's game will receive a shirt with the iconic '24' in honor of Bryant. 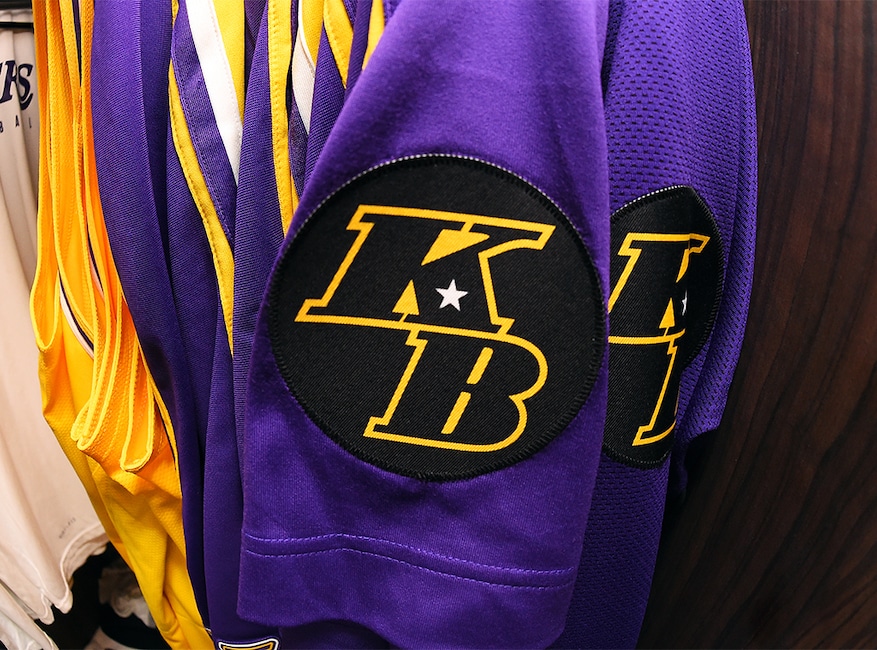 Patches with the late basketball star's initials are emblazoned across numerous Lakers merch. 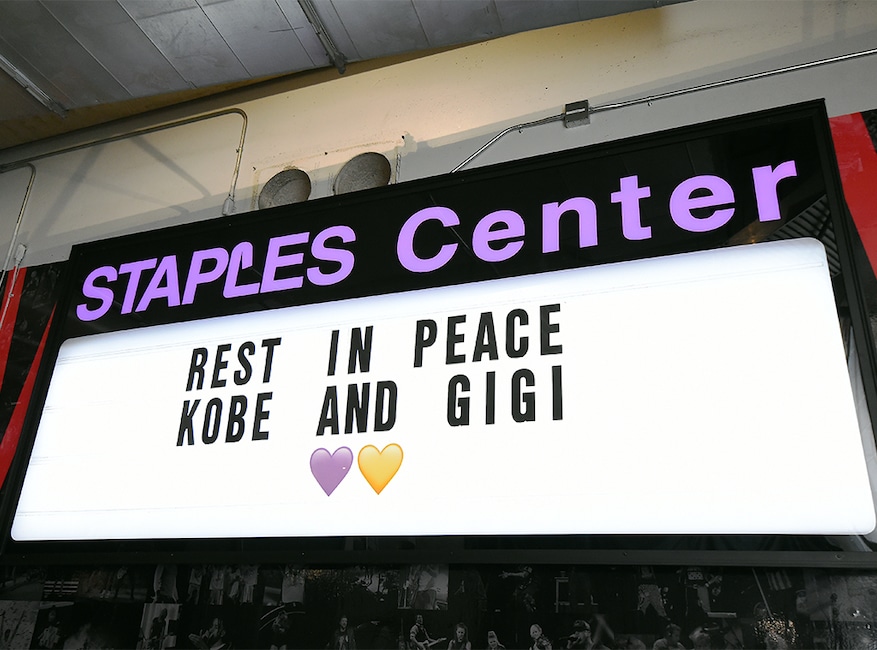 In honor of Kobe and Gigi, the Staples Center is changing their marquees. 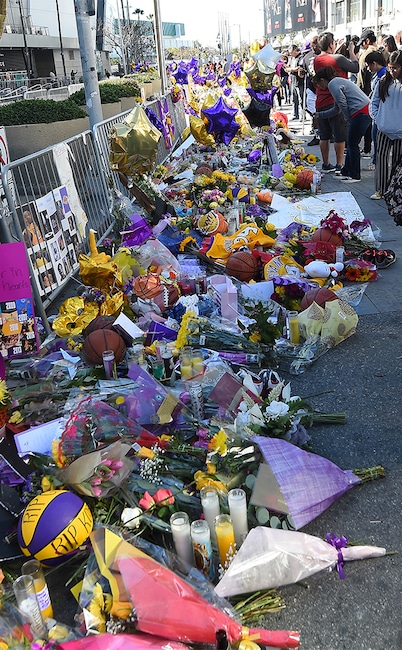 Scattered around the Staples Center are flowers, candles and other mementos gifted by fans.

Tonight's pre-game tribute comes after the NBA announced they will be making a joint donation of $100,000 with the National Basketball Player Association to the MambaOnThree Foundation, which was created with the sole intention of providing support to the families who lost a loved one in the helicopter crash.

In addition, Vanessa Bryant recently broke her silence on the death of her husband and daughter Gianna "Gigi" Maria-Onore Bryant on Instagram. In her powerful statement, the proud mom shared how fans can turn their pain into purpose.

"Thank you for sharing your joy, your grief and your support with us. We ask that you grant us the respect and privacy we will need to navigate this new reality," she wrote in part. "To honor our Team Mamba family, the Mamba Sports Foundation has set up the MambaOnThree Fund to help support the other families affected by this tragedy. To donate, please go to MambaOnThree.org. To further Kobe and Gianna's legacy in youth sports, please visit MambaSportsFoundation.org." 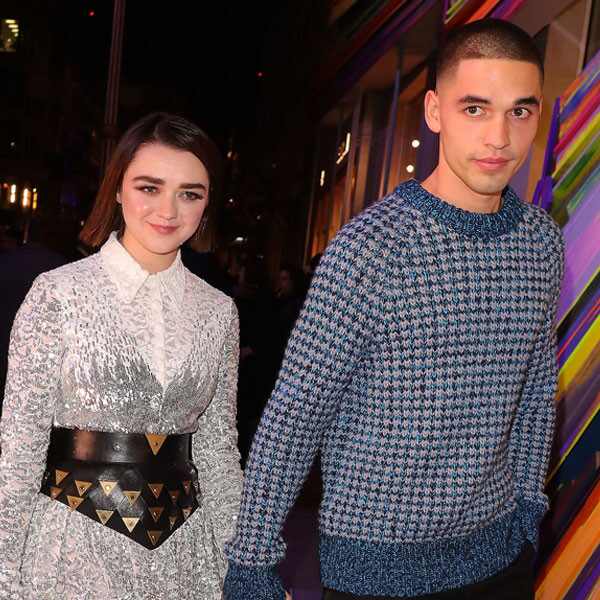 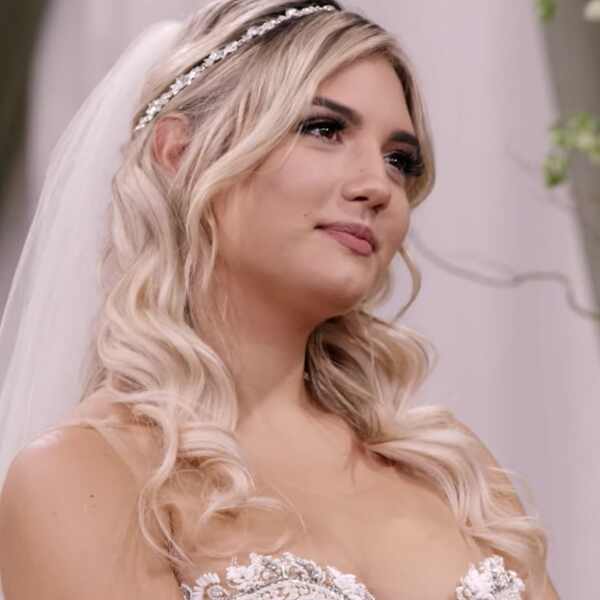 Are Any of the Love Is Blind Couples Still Married? 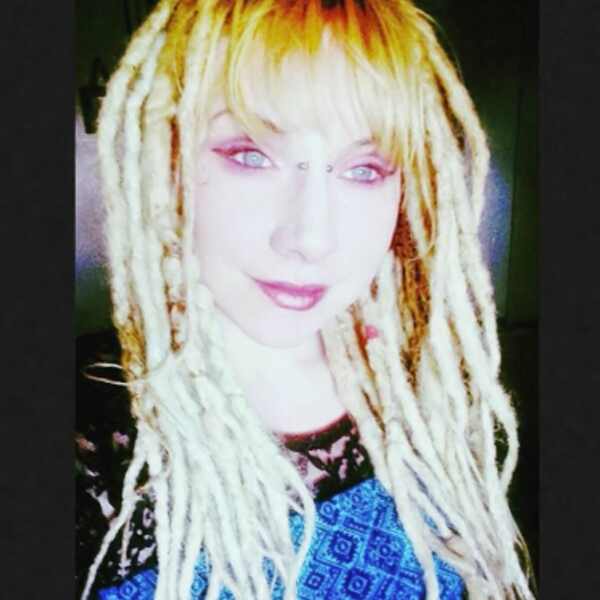 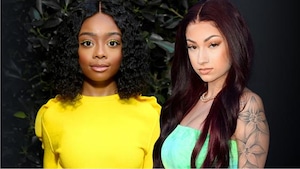 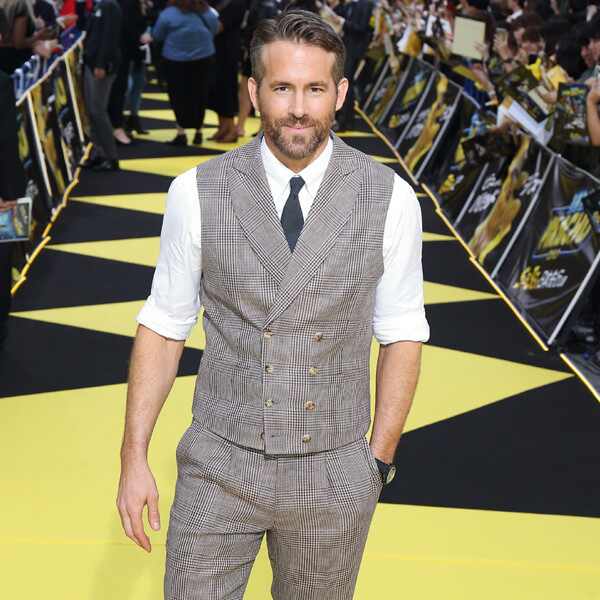