Camila Cabello once lost Taylor Swift's cat. Or did she?

During an appearance on Thursday's The Tonight Show Starring Jimmy Fallon, Cabello played a round of True Confessions with Ryan Reynolds and host Jimmy Fallon. The premise of the game was that each of the players had written down a few stories about their lives that were either true or false. When they read the stories aloud, the other competitors had to determine whether or not they really happened.

For his part, Reynolds shared a truly hilarious story about his mother accidentally washing her hands with a urinal cake at a funeral in Vancouver. Unfortunately for Mama Reynolds, that turned out to be entirely true. And it happened a few months ago. Fallon then shared a false story that claimed there was a bronze statue of him at the bottom of the lake at Neil Young's farm house.

Then, it was Cabello's turn. As she said, "I once lost Taylor Swift's cat."

Context please, Cabello! As she explained, "We were on tour together. I was opening for her on her reputation Stadium Tour. And she basically, she asked me to babysit her cat. Her cat kind of had a weird little stomach infection thing. She was going to go do a meet and greet. We were hanging out in the dressing room, I'm taking care of her cat. Somebody from my team asks me to do something, I leave the door open. The cat, Meredith, sneaks out. Is nowhere to be found. Hours pass, and nobody can find the cat."

Reynolds, very skeptical, then asked, "Where are you? What city?" Cabello responded, "It was also in Vancouver, actually."

Not one to be duped, the Deadpool star quipped, "This is already wreaking like a whole lot of bull." Fallon felt similarly, prompting Cabello to urge them to ask more questions.

Then, Reynolds joked, "Everybody knows that cats are banned in Vancouver." Digging further, the late-night host asked, "What was the cat like? The cat's sick. Is it moving around or is it laying there?"

Poking holes in Cabello's story, the Detective Pikachu actor—who is also buddies with Swift—then asked, "And she was like take my cat with this unpredictable stomach issue and enjoy for a while. Really?" 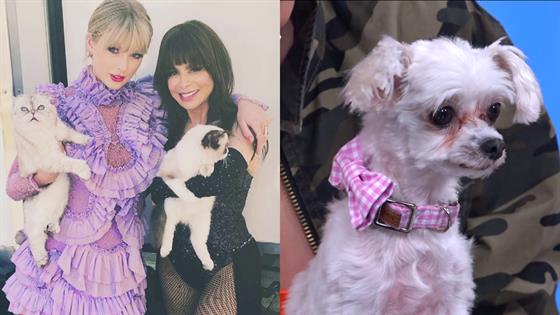 After some more back and forth, the "Señorita" singer then revealed that it was one of Swift's security guards that ended up finding Meredith.

As Fallon pressed, "Which one? I know all of her security guards." Now fully interrogating the star, Reynolds yelled, "Was it Dan?!" Chimed in Fallon, "No, was it Steve?!" Then Reynolds yelled even louder, "Was it Gil?!"

Eventually, the 22-year-old convinced the host and the actor that she was telling the truth. "I think we broke her," Fallon quipped. As Reynolds responded, "She's also one question away from flipping the whole table." But, as it turns out, "It is false!" Cabello revealed.

Utterly shocked, Blake Lively's love responded, "You have a black belt in lying."