Carrie Underwood might not have a new album just yet (it's coming this September) but that doesn't mean she's not a force to be reckoned with at this year's CMT Awards.

The former American Idol winner's many music video nods just proves that her videos over the years have just continued to get stronger. In fact, she's blessed us with so many hit songs throughout her career—each with an even better video—that we don't even know how to choose which track and corresponding video is the best. 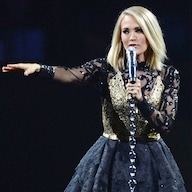 In honor of Underwood's upcoming record release and another big performance at this year's CMT Awards (she's one of the many stars slated to take the stage) we're going back through her best music videos of all time. Even though there have been a lot throughout her long career—she has five albums so far to pick from after all—we've managed to narrow it down to the top 10.

After you've finished singing to yourself at work (or at home) and watched all of these videos make sure to weigh in on which of Underwood's videos is your favorite. You can also re-vote if it's too hard to pick just one amazing video...we will totally understand!

As Underwood's first video from her upcoming album Cry Pretty, fans have been waiting for this video for a long time and it didn't disappoint. It shows the raw side of the artist and pulls at your heartstrings as you watch. Plus, the blonde beauty dons glitter tears throughout and manages to look pretty crying...despite what her lyrics might say.

"The Champion" is up for three awards at this year's CMT Awards and based on Underwood's vocals, lyrics and powerful visuals throughout the video we're not surprised. The video shows the Oklahoma native singing in the studio with images of Americans doing amazing things in between. They're fighting for their country, dominating on the football fields, overcoming illnesses and proving they're the champion with every image and motion. After watching it you will feel empowered and ready to take on any challenge, trust us! 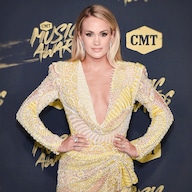 Talk about a video that tells a story! "Two Black Cadillacs" is one of the artist's best songs off Blown Away and the video is totally badass. It shows two black Cadillacs showing up to a funeral and then the dark events that led up to them both being in black veils. The suspense of watching the funeral of the man that both women loved, but were cheated on by, is chillingly good.

If you've ever missed anyone or lost anyone then this music video will touch your heart. In between Underwood singing her heart out there are images of loved ones celebrating the biggest life moments you can from graduation and weddings to surprise military reunions. You also see memories of loss, men leaving for war and people yearning for those who are no longer with them. It's beautiful and heartfelt and gives us all the feels.

"Toy Guns" has everything you could want in a video. It has conflict, fantasy and a little girl who becomes a warrior in order to escape her rough home life. Throughout the video you see the girl living in a warrior fantasy world to block out her parents fighting as Underwood walks through the mystical forest. It's like a mini movie and we wish we could live in this amazing world forever.

We can't get enough of this song from the artist's last record Storyteller. The video for "Dirty Laundry" is simple but it packs a punch. It's filmed in black and white and shows different men's lives falling apart after they cheat. With images of strong women taking back their power as they single along with Underwood you're instantly inspired to belt out the lyrics yourself. The artist isn't falling for these men's excuses and neither are any of the other women, so take that!

Carrie Underwood on Her Love for Country Music at 2017 Grammys

This song will forever be on our list of Underwood's best songs. The video is even better…if that's possible. The singer plays a scorned lover who is ready to take out her revenge on her ex by attacking his car. She hits the windows with a bat, keys the side of the door and carves her name into the leather seats. She definitely makes a statement and the video is so fierce. Maybe next he will think before he cheats.

8. "Something in the Water"

The 2014 video is pure magic. As Underwood sings in a pool of water dancers perform all around her and each movement is more impress than the one before it. Every move the dancers do is beautiful and enchanting and the water splashing up with their motions just adds to the overall image of beauty. It's romantic and will keep you enthralled from start to finish.

Carrie Underwood Takes the E!Q in 42

Technically this is Miranda Lambert's song, but Underwood is featured on it and she's in the video so it counts. This epic video shows the two country stars as average workers who find themselves at a high stakes game of poker. Come to find out they are fierce criminals who rob a bank and hustle the gamers all while looking pretty and powerful. We love seeing the bad girl sides of both these singers, don't you?

Underwood has a history of telling very interesting and intense stories in her music videos and "Blown Away" is no exception. It begins with the singer doing her homework as her father tries to help before getting angry which causes her to run out of the room. You then see a storm brewing and learn that her father is not a good guy. In the end the tornado takes him and the house away and leaves her safe and able to move forward. It's a whirlwind of a video and basically the darker version of the Wizard of Oz and we've always loved its story.

The moment has now come for you to cast your vote. Let us know which of Underwood's top 10 music videos is your favorite and make sure to tune into the CMT Awards on June 6 on CMT to see the artist take the stage once again.