Why We Need the "All-Female" Ocean's 8, Even If We're Tired of Calling It That 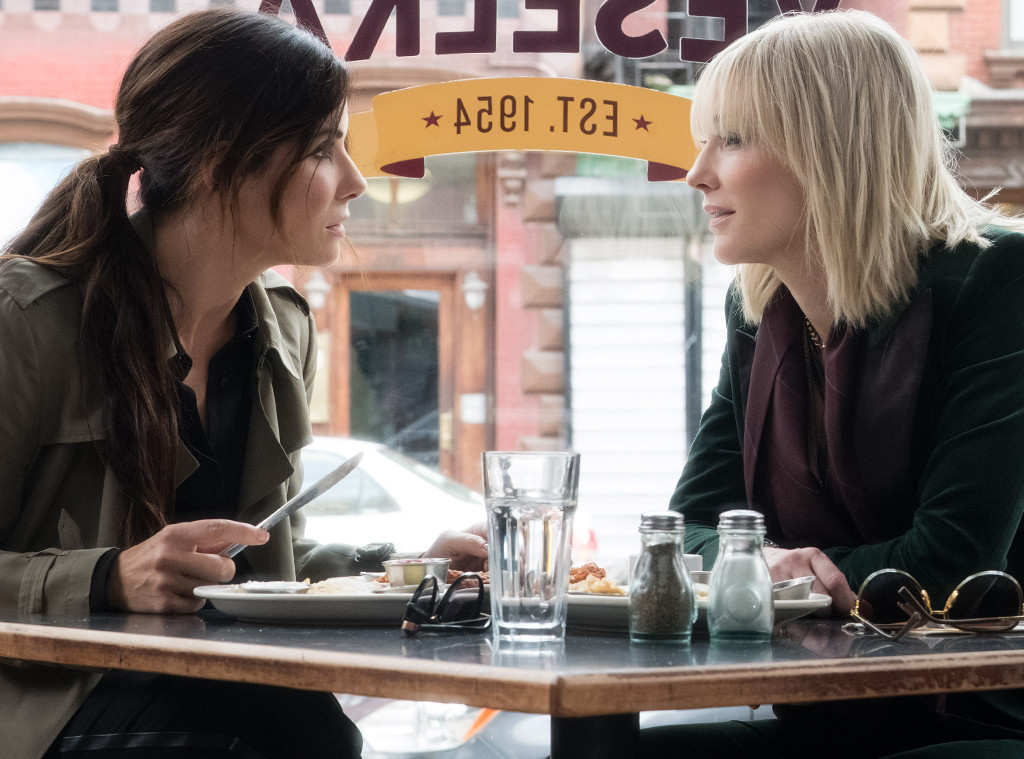 It's been quite a week for the phrase "all-female."

Ocean's 8 has finally graced the world with its stylish, coat-clad presence and its full roster of major, award-winning stars like Sandra Bullock, Anne Hathaway, Cate Blanchett, Mindy Kaling, and yes, Rihanna. It's a heist movie starring frickin' Rihanna 11 years after the last Ocean's movie and apparently, all we can do is call it "all-female" and talk about how it had better be damn good. All those women and no George Clooney had better be worth it!

The truth is that this movie is worth it no matter what for a lot of different and sometimes complicated reasons, many of which have been discussed in depth throughout the movie's press tour. Was it crazy working with all women? Did you all really get along? You're all beautiful famous movie stars, could you really be friends? 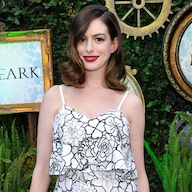 Meet the Female Stars of Ocean's 8

Those are typical questions asked (in one way or another) of groups of female stars working together, and questions that become even more interesting now that we're in the #MeToo era. Anything all-female in this sexual harassment revolution we're living in is like an automatic statement of solidarity, but as Cate Blanchett said in a great interview with Refinery 29, this is also just a movie.

"I hope that we don't have to have these conversations anymore," she said.  "I am really done with talking about how amazing it is that we've got an all-female cast. Because in the end, it's a heist movie, and you don't want this sort of political climate on a human issue to eclipse the fact that this is just a fun film. The timing is actually completely coincidental. Fantastic, wonderful, but completely coincidental."

This is, after all, a movie about a bunch of women stealing a necklace from the Met Gala. Who says it has any responsibility to speak to the nature of being a woman in 2018, or to change the face of movies forever, or be anything other than entertaining? 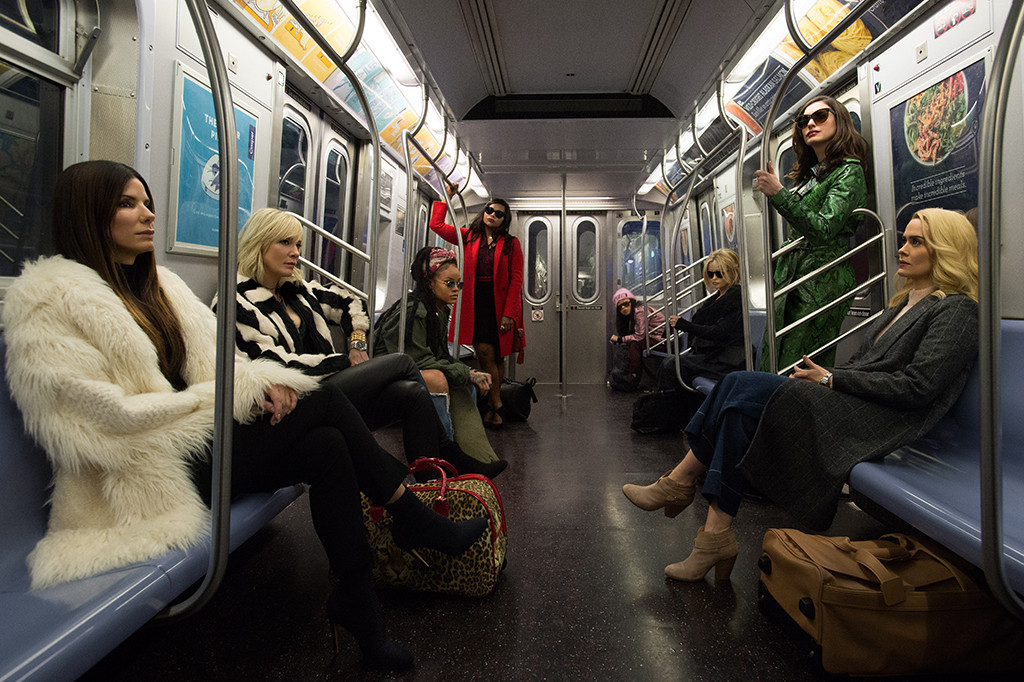 "This is just a fun film" is something that's hard to remember now, and it was also apparently hard to remember when Paul Feig remade Ghostbusters with a group of funny ladies. That movie was kind of torn apart by a lot of critics and so-called fans both before and after anyone saw it, and it was also just a fun film that was just as fun (and just as ridiculous) as the original Ghostbusters ever was.

But while these are fun films, their "all-female" nature is still important. Good or not, fun or not, these movies are going to have an impact on little kids who love action movies and who don't have to grow up thinking that even their most fantastical fantasies are restricted because of their gender, thinking spies and ghostbusters and white collar criminals are only things that men can be. Adults, too, can occasionally use a reminder (especially now) that women are powerful and funny and strong and flawed and supportive of each other and they don't have to have love interests and they can also bust ghosts if they want. 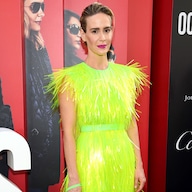 Movies starring groups of women are nothing new, of course. Sandra Bullock referenced Practical Magic in the Refinery 29 interview, and before Ghostbusters, Paul Feig brought us Bridesmaids. In the past year, we got Girls' Trip and Rough Night. But the difference with both Ghostbusters and Ocean's 8 is that they took formulas that previously featured groups of men and replaced them with groups of women doing the same things. Being a bridesmaid (even an incredibly raunchy one) is traditionally feminine. Pulling off an elaborate heist is less so, according to the movies. Ocean's 8 lets a bunch of women pull off a heist and wear incredible clothes at the biggest fashion event of the year at the same time.

Many have argued that there is no issue with movies about women, but the issue is that these are just reboots of old franchises. "Hollywood is so out of ideas that they're just going to go ruin their old ones!" comments have definitely said. But if men have been getting silly man-led action movies and mediocre man-led sequels for decades, it feels only fair that women should get them too—the good, the bad, the silly, and the mediocre. All of it! 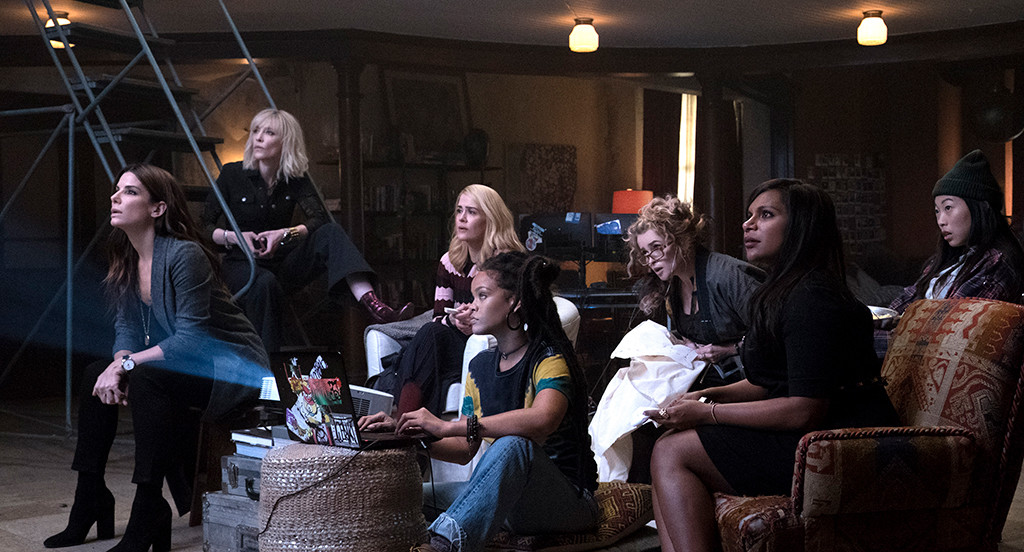 Luckily, "all-female" reboots and sequels appear to be just the beginning of action movies that lean on female relationships.

We just got Annihilation earlier this year starring Natalie Portman, Jennifer Jason Leigh, Gina Rodriguez, Tessa Thompson, and Tuva Novotny. In August, Mila Kunis and Kate McKinnon are starring in The Spy Who Dumped Me about two best friends caught in an international conspiracy after one of their ex-boyfriends turns out to be a spy. Jessica Chastain came up with the idea for 355, a film and hopefully a Bourne-like franchise about five secret agents who form a spy sisterhood, starring Marion Cotillard Penélope Cruz, Fan Bingbing, and Lupita Nyong'o.

These movies will continue to be important until the day when it's no longer noteworthy to call a movie "all-female," or maybe until the day when it's more noteworthy that a movie is still "all-male." The dream, of course, is the day when the movies don't have to be all-anything to be significant, and we can all just kick ass together without needing to define everyone's gender, but for now we will take what we can get—especially if what we can get is as fabulous as Ocean's 8.