The former Bachelor and his famous wife Catherine Giudici have a full house these days after welcoming their second son, Isaiah Hendrix, last month. In 2016, the couple became parents for the first time with the arrival of their son Samuel Thomas, two years after they tied the knot in a televised wedding.

How's juggling two tots under two these days? So far, so good.

"So far it's been, knock on wood, it's been kind of easy," Lowe told E! News exclusively. "Our new son Isaiah—he sleeps all day, and Samuel, he's a really good dude. He's a toddler, so he's got a bunch of energy. So, it's kinda my job, as Catherine takes care of Isaiah, it's my job to take Samuel, take him to the park or I'll walk him down the street to the donut shop or whatever—just get the energy out of him is kind of my job." 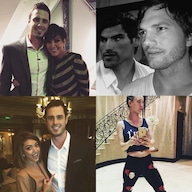 I’m tired, but never of this 😍

As for Samuel, the toddler has begun to figure out his new big brother role.

"He's doing great," the proud dad said of his firstborn. "We weren't sure how this would all shake out, but he's very loving. I think the first time that he saw Isaiah in the hospital, we said, 'Go and kiss your brother,' and he walked over and kissed him and everyone in the room was like, 'Aw.' And you could see Samuel's face light up like, 'Wait a minute—they like it when I do this,' so now he just kisses him about 100 times a day."

One day when they're older, the couple will have to explain to their boys the unique way mom and dad crossed paths. "It's gonna be very awkward," the former Bachelor star said. He and Giudici met on his 2013 season and she scored his final rose. "I guess I'll say, 'You know your mom and dad both signed up for this cheesy reality show thinking it's just gonna be a chance to travel the world and somehow we fell in love, got married and here you are.'"

Though they found fame together in the course of their reality show careers, a big Hollywood life is not what sustains them. 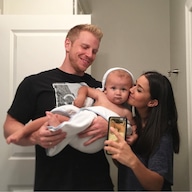 While they're still getting settled with baby number two, the couple also wants to add to the family.

"We know we want to adopt at least one child. But, at the same time I would love to see what a biological daughter would look like because hopefully it would look like mama," he said. "But, I don't know 'cause that means if we had one more, there's a chance it could be another boy and then if we adopted another one, that's four kids. That's a lot of kids."

As they figure it all out, adoption is definitely on their minds, especially after Lowe's sister adopted two girls.

"It's affected us in a great way," he said. "And to see how these two girls' lives have been radically altered for the better, so we want to do that, too."

In the meantime, the Texas native has been trying to improve lives after last summer's Hurricane Harvey, especially when it comes to pets.

"I was in Dallas and we were spared from the storm," he recalled. "I just remember thinking, 'I need to help somehow,' and they really needed help with evacuation and I didn't have a boat, so I tweeted, 'Hey, does anyone around here have a boat that they would let me borrow?' And a really nice lady did and so I went down to Houston and I was able to help in the relief efforts and I saw the devastation firsthand and part of that is just people's pets—a lot of them were left stranded."

As a result, Lowe, a dog owner, partnered with the Banfield Foundation to help pet owners be prepared in disaster situations. "They've got these great disaster preparedness kits, so your dog has essentials, food, water, things like that for worst-case scenarios, and then there are simple things you can do, too," he explained. "Make sure your dog has an ID tag and microchipping. Make sure you have a picture of your pet in case you were to lose them somehow. So, we're getting the word out about that and it's a fantastic organization."

"You never think, 'Hey, that could happen to me' until it happens," Lowe added. "So, plan ahead and take care of your pets."