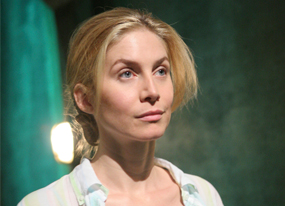 OMG, right? Was that not the best ep so far this season? I loved it all, but especially Alex with her slingshot and her thang for Karl, Juliet having the bad fortune to get exactly what she wished for, and Jack wielding his surgeon mojo like the dangerous weapon that it is!

I also just met up with big baddie Ben (Michael Emerson), who gave me lots of juicy teases. But first we must discuss last night's episode!

Hanso is everywhere. If the research facility that's not in Portland isn't a front for the Hanso Foundation, I'll eat my shoe. Hell, I'll eat your shoe.

"It's Wasn't a Toomah!" Juliet successfully impregnated a male field mouse. "He didn’t carry to term." Bwah! (And also, ewww to the whole concept. But bwah to all the funny in this ep.)

The producers are Zeppelin fans. "Everything changes." "We are the causes of our own suffering." "God loves you as he loves Jacob." "Think about your life." Three out of four of those phrases are guiding principles of the character development on this show, and as for the fourth, well, Jacob, if you'll recall, is the name Pickett dropped once before. Oh, speaking of Jacob, there's a fellow in the Bible named Jacob, who happens to have a kid named Benjamin (mmm...), although of course Jacob is best known for wrestling an angel and finding some sort of staircase, or was it a stoop—no, it was a ladder! (Maybe they're supposed to climb off the Island? Or maybe the only escape is death, and from there you can only hope for a stairway to heaven?)

The names have meanings. Ah, tuberinos, this truly is a golden age for nerdery. We learn in this episode that Juliet's last name is Burke, which is the latest entry in the show's philosopher's name sweepstakes, and follows in the hallowed footsteps of Locke, Rousseau, Hume and Carlyle. Edmund Burke, for the record, is best-known for his book Reflections on the Revolution in France. And if you can explain what that means in the context of the show, I will give you a cookie.

I have questions. What the heck happens to Karl once Sawyer and Kate get back to the original Island? Is Benry really a gentleman? And what's the significance of the exact duration of time that Juliet's been held captive on Isle Hellmouth? Discuss in the comments below.

The story of Juliet and her sister is not over! I tackle-jumped Robin Weigert (Juliet's sister, Rachel) at a recent event for scoop, and she told me the writers were in the midst of creating another episode that continues Rachel's story. "I don’t know what kind of cancer I have," she said. "It has not been revealed to me, [but] I am not playing it being in any vicinity to the baby...I suppose I will discover [when I go back]." I told her that she and Elizabeth Mitchell were very well cast as sisters, and she agreed, saying they got along famously. "We sort of found, as we were chatting with each other, that we have the same gestures, where the top of us floats around and the bottom of us doesn’t know what to do with itself. She’s a lovely actress and a lovely person." Amen, sister!

We see much more of Ben and Alex and Juliet. Meanwhile, I just ran into Michael Emerson (Benry) while coming out of Koo Koo Roo (true story), and of course, because he's always so gentlemanly and polite, I immediately harassed him for some good scoop! Turns out he had the week off, because they were shooting a Benless episode, so producers weren't kidding when they told us the show is moving back to the original Losties. Still, we'll be seeing much, much more of Ben. And he kindly answered these...

You've spent a lot of time facedown lately. How was that?
Uncomfortable! It was kind of a tortured physical position. And to hold it for a long, long time with your arms out and strapped in like that, it was killing the shoulders and the neck. I thought maybe I'm just a baby, but then my stunt double who was much younger and more physically fit said it was killing him, too!

So, obviously, there is some sort of previous romantic connection between you and Juliet, right? And also some kind of relationship with Alex. Is that going to be further explored?
Yes. In fact, we are now laying the groundwork for a full-blown relationship and problems to come.

We know the show is focusing on the original Losties. But you're not going anywhere, are you?
No, but I’m never going to be the same either. This thing in the operating room, it gets much worse. The whole sort of hierarchy of the world of the Others is about to be shaken. There’s a power vacuum and new, even scarier characters coming. But also, as you said, the show is going to move its focus back to the Lostaways.

Do you feel pretty well informed at this point? Do they give you sort of the big-picture concept? Or are you going one episode at time?
I know more than I usually know (more than the audience) right now, because we have so many in the can. But for as the answers to the great underlying mysteries of the show, I’m no closer to that than the audience is.

Well, keep up the amazing work, and good luck on what's next. They've really put you through the runner so far.
I was hung through a tree, I was shot through with an arrow, I was hog-tied, threatened with Russians and electricity and knives. And I still look good through all of that. [Laughs.]