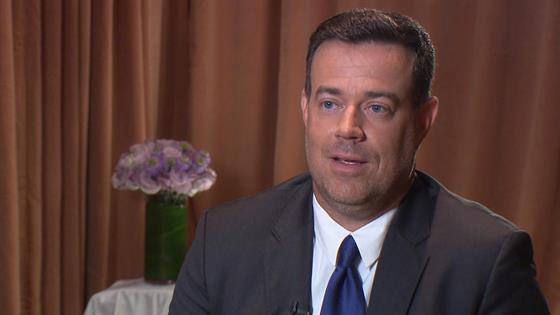 Carson Daly appeared remotely on NBC's Today show on Friday to gush about the arrival of his newborn daughter and fourth child, named after his late mother, and to praise his wife Siri, who was spared from giving birth alone amid the coronavirus pandemic.

The 46-year-old co-host announced on Instagram on Thursday that Goldie Patricia Daly was born that morning in a New York hospital. He shared a photo of the three, with him and Siri wearing masks.

Daly appeared remotely on the Today show on Friday and shared more photos of him and Siri holding baby Goldie, saying, "[Siri is] doing great. Goldie is awesome," he said. "He middle name is Patricia, named after my mother, who you all knew well. It would have been my mom's birthday tomorrow, so that worked out to be quite nice."

"I just got the results of my AncestryDNA kit that my sister got me for Christmas back not long ago, and it confirmed my 98% Irishness and so I was looking at Irish names on St Patrick's day morning, and I stumbled on 'Goldie.' We had a shortlist of names that we liked, but nothing was sticking its neck out. I thought about it and I thought, this is our fourth kid, she seems like the pot of gold at the end of our family rainbow and I told Siri, I said, 'What do you think about Goldie Patricia?' and that was it. It was just one of these things, we knew."

Daly also said, "I woke up today really just profoundly moved. Two things come to my mind. Number one is the strength of my wife. Watching Siri over the last 48 hours, not to mention during this pregnancy, but being nine months pregnant at this time, you can imagine the extra anxiety that has brought."

New York City is the U.S. epicenter of the coronavirus pandemic and its two leading hospital networks recently changed their visitor policies to prohibit birthing partners or other guests from labor and delivery rooms in a bid to protect mothers and babies.

"I dropped her off at the hospital because the hospitals in and around New York...have quite new guidelines," Daly said. "She went alone on Wednesday night. I could only join her for the birth, then I had to leave again as they are quickly trying to flip those rooms around."

Daly praised his wife and the hospital workers.

"She's a superstar, a superhero," he said. "I wake up enamored by her and also the medical staff that we dealt with last night. The work they are doing on the front lines, you don't believe it until you're actually there and can see it."

#CarsonDaly gives us an update about baby Goldie and how wife, Siri, is doing after giving birth to their fourth child.

"I wake up today so profoundly moved by two things, number one is the strength of my wife... and also the medical staff we worked with." pic.twitter.com/1yg65TsybD