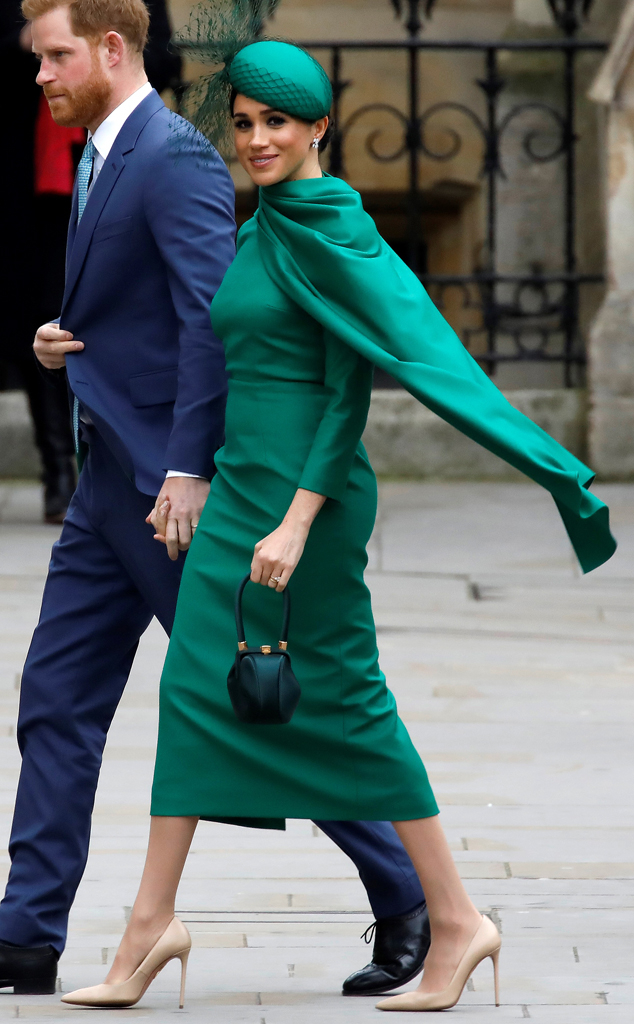 For her final royal public engagement, Meghan Markle did not blend in.

Along with her husband, Duke of Sussex Prince Harry, the Duchess of Sussex is set to officially step back from her royal duties at the end of this month and shift into life as a privately funded member of the royal family, permitted to earn her own income and pursue her own private charitable interests.

With the date looming closer, she and Harry arrived at Westminster Abbey on Monday for the annual Commonwealth Day service, an event they've attended together since just before their 2018 wedding. Not only does the event mark their final scheduled royal engagement before the transition date, but also served as a public reunion with Prince William and Kate Middleton since announcing their royal exit.

With eyes all over the world watching, Markle stepped out dressed to impress in a vibrant emerald green monochromatic ensemble consisting of a caped Emilia Wickstead sheath dress, nude Aquazzura pumps and a green Gabriella Hearst top-handle purse. To complete the polished royal look, the former American actress donned a matching fascinator decorated with a netted accent by William Chambers.

After coordinating in red at the Mountbatten Music Festival over the weekend, the pair subtly matched by way of Harry's blue suit jacket, which had a green lining.

While Markle has been known to sport green on several occasions over the years, she has has previously worn black and white to the event. 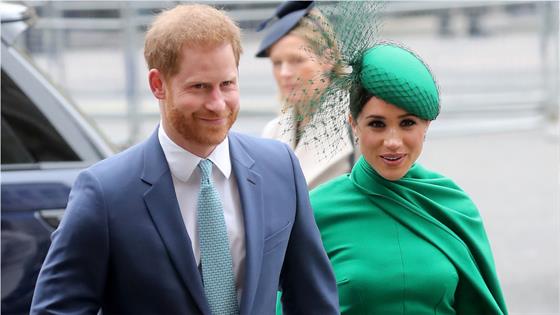 However, the new mom has not shied away from sporting vibrant color for their final round of royal events, including a red Safiyaa gown for the music festival and a cerulean blue Victoria Beckham sheath dress for the 2020 Endeavour Fund Awards last week.

Though Monday's outfit marked her last for a royal engagement, as evidenced by her library of looks over the years, fans can rest assured Markle's style will always be regal. Look back on Meghan's final royal looks with E!'s gallery below! 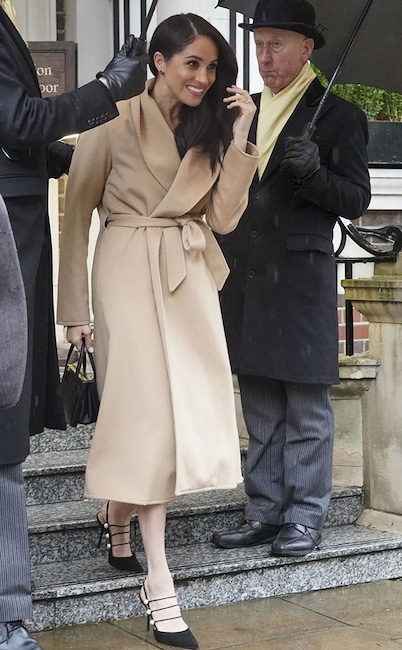 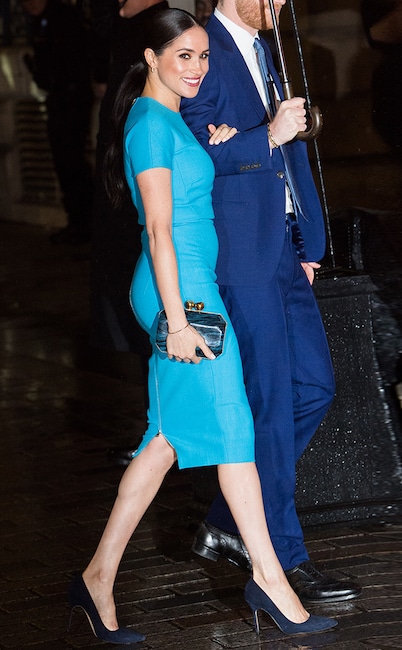 The star was unmissable while arriving at the 2020 Endeavour Fund Awards in a vivid cerulean sheath dress by Victoria Beckham. 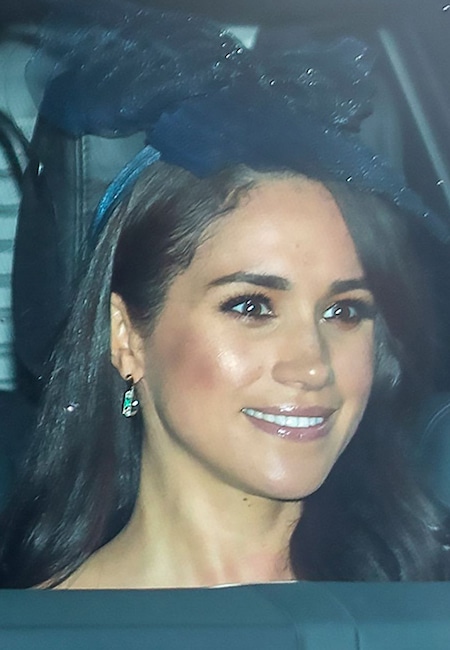 While much of her outfit for church with Queen Elizabeth II has not been seen, the duchess did don green, black and rhinestone V by Laura Vann Daphne earrings for the outing as well as a fascinator. 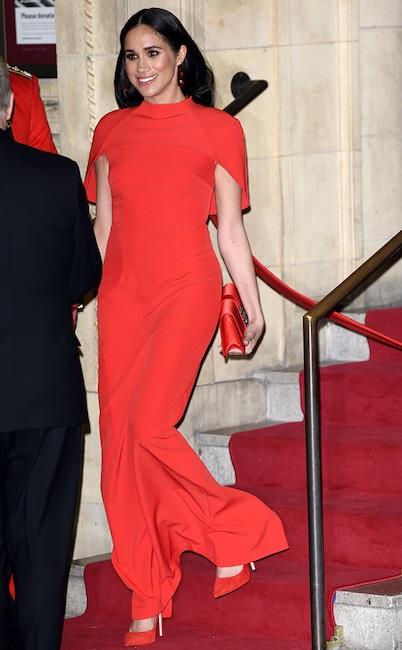 The Duke and Duchess of Sussex coordinated in bold red for the Mountbatten Music Festival, Markle donning a striking caped Safiyaa gown. 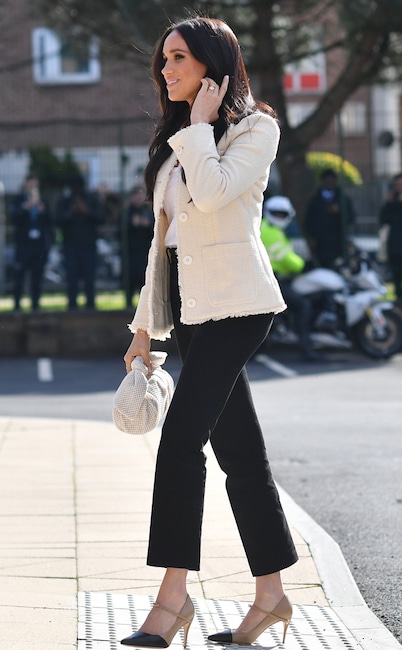 For her final solo royal engagement, Meghan Markle opted for polished daywear in the form of a cream tweed jacket, black trousers and nude and black pumps for a visit to the Robert Clack Upper School. 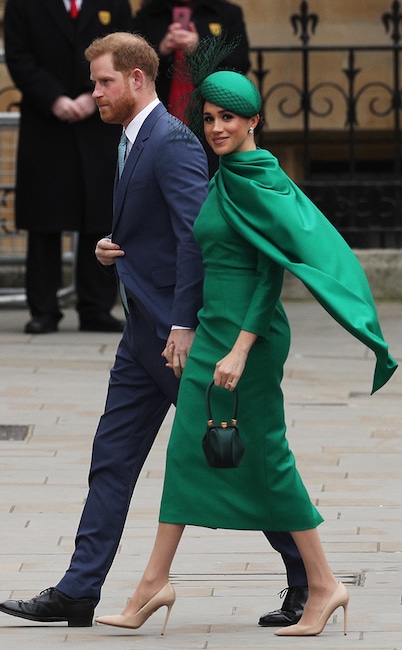 For her final royal engagement, the former American actress stood out from the crowd in a vivid emerald green caped sheath dress by Emilia Wickstead.