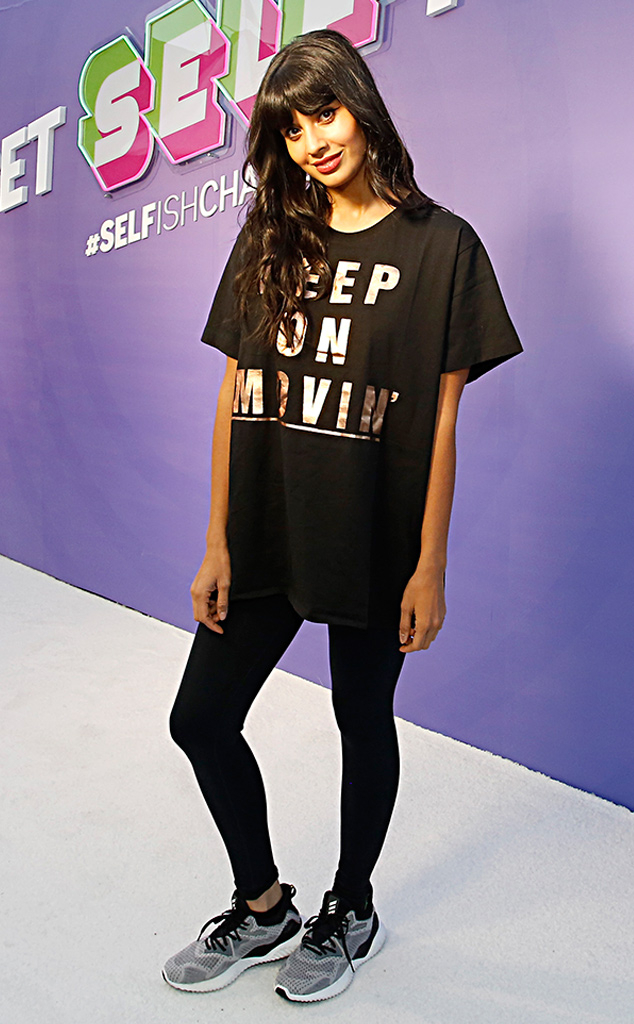 Depending on who you believe, Jameela Jamil has either incredible bad luck or a serious case of Munchausen.

Over the years, the Good Place actress has allegedly suffered from a series of illnesses, car crashes and bee attacks, most of which she claims left her in a state of total weakness. She's discussed these instances in numerous interviews and social media posts as a way to raise awareness to the struggles she's faced and to help others. In effect, Jameela's turned into an activist of sorts and is now seen as an example that if you work hard and persevere through the pain, dreams will come true.

But alas, it seems producer and writer Tracie Morrissey, who Jameela has branded an "unhinged idiot," is finding some major holes in Jameela's tale of survival and triumph. Specifically, Tracie says Jameela's claims of cancer and car crashes don't seem to add up, for one reason or another. So, Morrissey decided to create a detailed history of Jamil's various illnesses and accidents in an Instagram Story Highlight, which has now gone viral.

According to the highlight, the producer began to suspect Jameela has Munchausen when she saw that the actress claimed to have lost a tooth, broken her nose and elbow and got a concussion during a rowdy day of filming with fellow Brit Olly Murs. The Brit later recounted this accident while visiting Good Morning America, where they played footage of the tumble. But upon seeing the actual clip of Jameela falling and the moments after, Morrissey didn't think those injuries were possible, especially since Jameela's nose looked to be okay, as well as her elbow.

Having seen the viral thread, Jameela clarified, "Have you ever heard of adrenaline? I was able to keep filming for an hour after the accident. I didn't know at the time I was concussed. I was in shock. I felt no pain. And stuck my tooth in with adhesive. I still have the cracked tooth. I never replaced it. Next question." 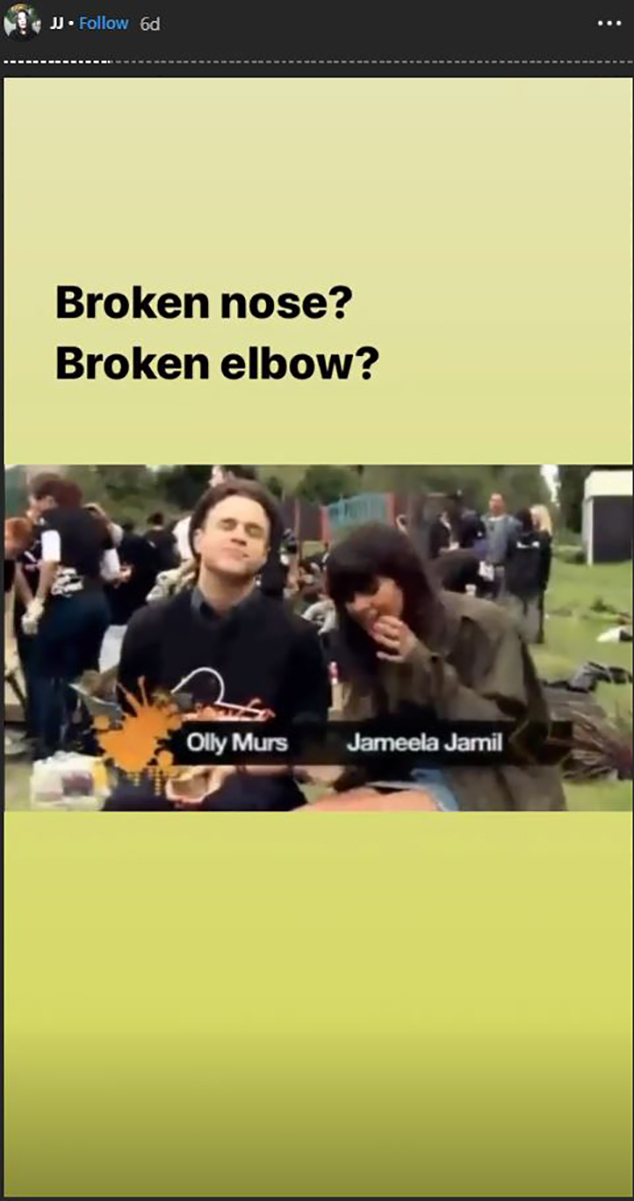 And sure enough, Tracie had more questions. Next on her list of suspicious accidents, are the multiple altercations Jameela's had with bees, most of which resulted in serious injuries for the star. As Jameela told Jimmy Fallon in January, "I got chased by bees, hit by a car in season one. Got a concussion during season one, because I saw a cookie on the ground and I was like—I have a 30-day rule—I'm going to eat that cookie and I just reached, forcefully, to go and get the cookie and knocked myself out on my side table, had a concussion; had seizures for like three months."

She continued, "I rolled my ankle, I broke my arm—none of which was onset, it was just during filming. Then, finally, in season three we have to fight all these demons and they gave every single other character, including 70-year-old Ted Danson, action to do and made me just sit behind a pool table and watch, because they said it was the only thing I was safe doing. At the end of this 3-day shoot of me crouching behind a pool table, I pull a muscle in my ass while down there and remain the only cast member to sustain an injury." 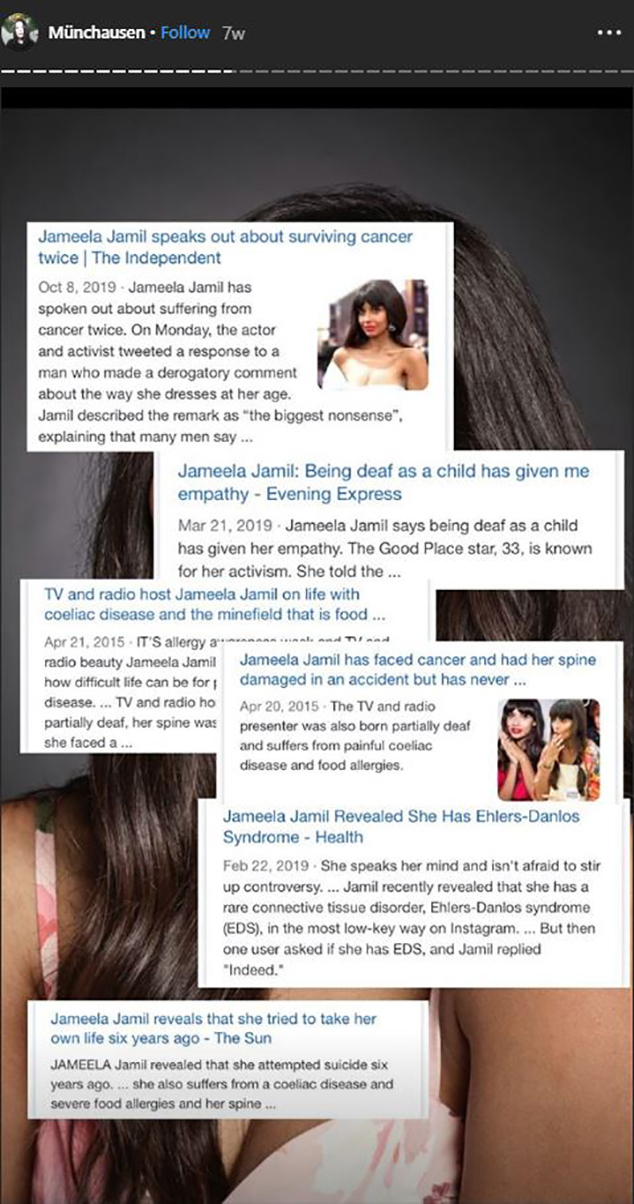 Again, Jameela explained that she really did have a concussion because of the cookie. "I had a concussion that caused atonal seizures because I hit my temple on a table corner on my way down to grab the cookie in my greed. They lasted as long as the swelling and I've been fine since," the actress shared.

Moreover, the bit about running from a bee and being hit by a car is supposedly true too. This took place when she was jogging and a swarm of bees started chasing her, forcing her into the street, where she was hit by a car. Jameela tries to prove this is more than possible by pointing out, "Roads are everywhere."

"It's not even a mad story," she insists to her critics.

Then, when someone tells her, "bees don't actually do what you claim they've done to you," she responds, "Why is being chased by bees so unbelievable to you. Do you spend less time In greenery than me?"

There's also Jameela's story about being hit by a car when she was 17-years-old, which, once again, happened she was trying to escape another pack of bees. This resulted in her breaking several bones and sustaining severe damage to her spine. "I got hit by one car into another car and basically destroyed my back. I was in bed for about a year and in a wheelchair for about six months after that," she told Cosmopolitan in November.

However, her claim about being confined to a wheelchair differs from an earlier account in which she said she used a Zimmer frame to get around after the accident. But, again, Jameela has a reason for these disparities: "Wheelchair first. But lived on the second floor flat in a tiny apartment. So to actually get around I had to use a Zimmer frame. And then crutches. And then a stick. And then I was ok." 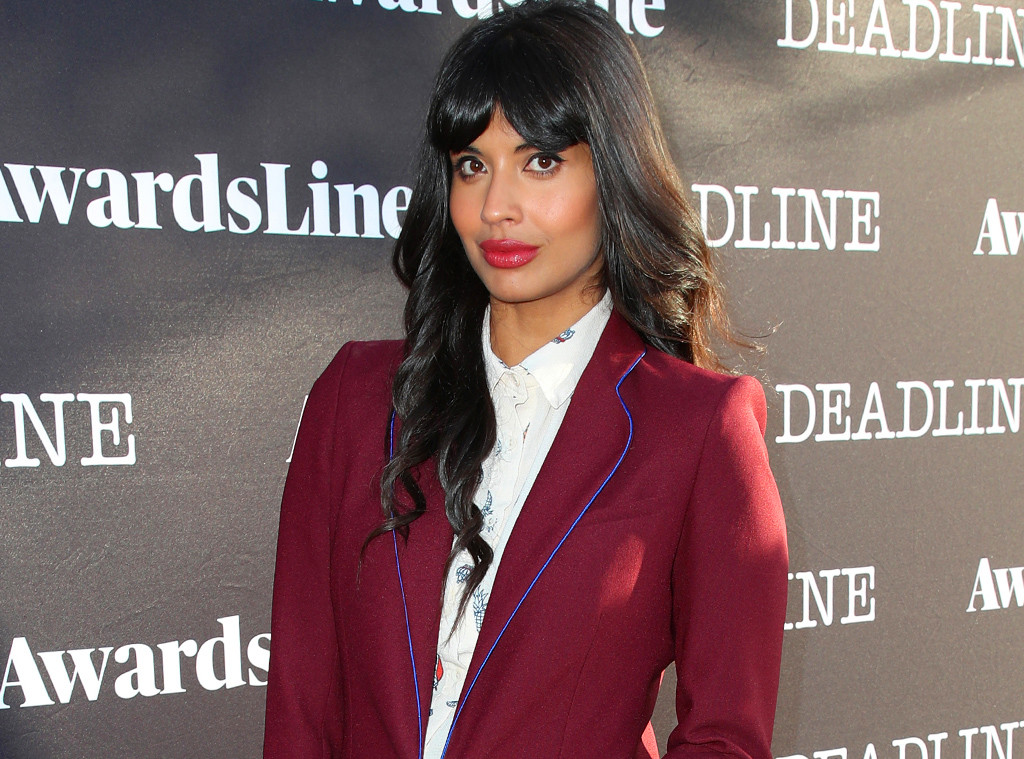 But Jameela's frightful encounters with bees doesn't end there. According to Jameela, she and Mark Ronson were once terrorized by a "cloud" of bees. "Neither of us tried to save each other. It was every man for himself. It was like, 500 bees. It was horrible. I would never have left a man down, but we both turned into Usain Bolt then," the star joked to the media in 2015.

However, if you were to ask the DJ, he'd likely tell a different version of the story. In an interview weeks later, he said of the experience, "I think that maybe we were sitting outside and there was a fruit plate nearby and maybe one or two individual bees approached slowly and instead of running from a swarm of killer bees, I think we said like, 'Should we go inside?' We walked slowly inside."

He added, "I think maybe she sensationalized the story a little bit." Although, Ronson did say she told the story as a way to promote her charity Why Not People?

Nonetheless, Jameela says she remembers it very differently. She insists, "My version was true. I don't know why he said that. I asked him. Awaiting a response. Other people on set all saw it. It was mad. But naturally people believe a man over a woman. Just because. Pretty interesting."

In her final statement on the bees of it all, she states, "I am certain that how many altercations I have had with bees is my personal final destination timeline. They will take me out in the end. I'm certain of it. It doesn't help that I run screaming whenever they are near. So I'm pretty sure I provoke a reaction and deserve it." 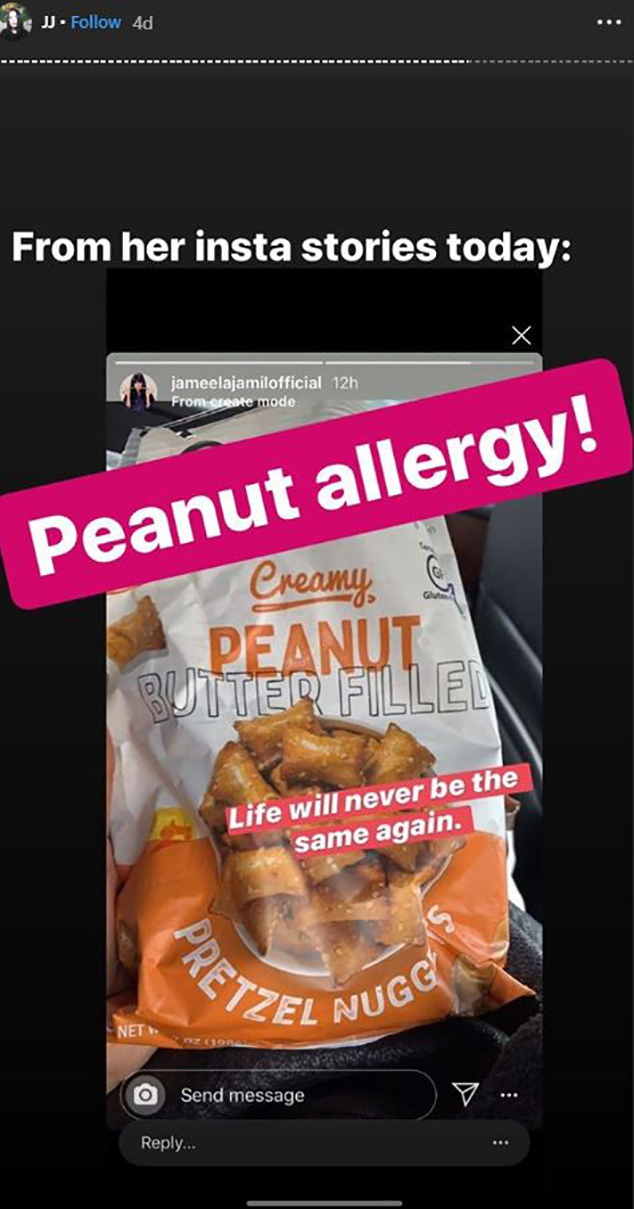 In regards to Jameela's various food allergies, including gluten and nuts, which Tracie questions due to Jameela's dietary choices, there's an explanation. As Jameela previously shared, she was born allergic to shellfish and peanuts, was later diagnosed with Celiac disease and even suffered a bout of mercury poisoning from her dental fillings. All of this, she claims, then contributed to her developing more allergies.

Now, these problems have lessened as the star came to understand what was afflicting her. "Mercury poisoning in my twenties. Had 11 fillings removed and my stomach lining was damaged for a decade. Got loads of weird food allergies that cleared up as I healed my gut," she explains.

Next on the list is Jameela's assertion she survived cancer not once, but twice. As Tracie discovers in her Munchausen highlights, the star claims to have two frightening encounters with cancer, one of which Jameela confirms came from HPV. "1 was a breast cancer scare at 28. The actual cancer was cervical cancer. Which is extremely common and scary. Next question D--khead?

One thing that could explain just about all of Jameela's health problems, aside from bees' abnormal attraction to her, is her claim that she has Ehlers Danlos syndrome, a condition in which skin is overly elastic and can bruise easily and causes joint issues. "Being gaslit over your health for entertainment is a very specific pain and trauma that a lot of people with Ehlers Danlos/invisible disability have to face every day from people who don't understand our vastly under-researched condition," she shares. "And to what end? Who wins? If I was... Oil tycoon destroying the planet, or a serial sex offender I would maybe understand this vitriol and effort to target and harass me. But I'm just a mental health/eating disorder advocate actually taking the time to change public policy and legislation to protect kids." 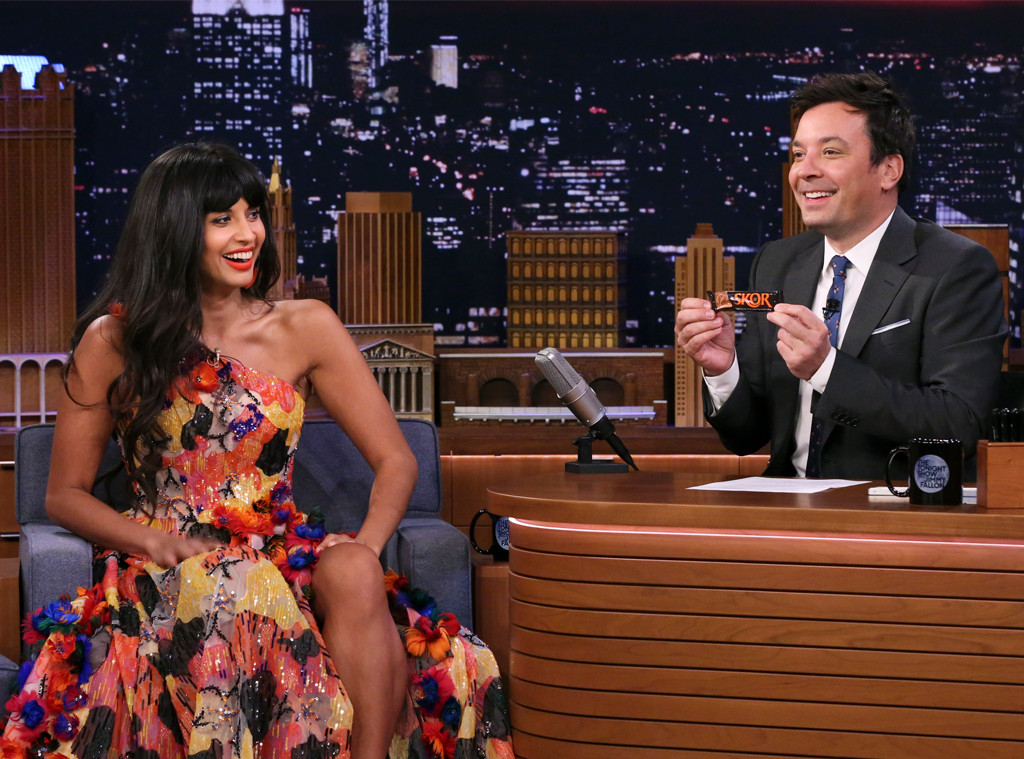 Finally, after defending herself for many hours, the actress stopped engaging with the conspiracy theorists. "I've said my bit. I've explained and defended every single accusation In my various threads. Now if you'll excuse me I have to get on with a speech I'm writing for the UN. So have fun arguing about how many times YOU think I've run away from bees. Or if YOU think I had cancer!" she concludes.

As for Tracie, the one who compiled all of the aforementioned evidence, she's since released a correction noting that Jameela likely doesn't suffer from Munchausen, but instead suffers from Somatic Symptom Disorder. She also clarifies she's not a medical professional, but a "nosy lady."