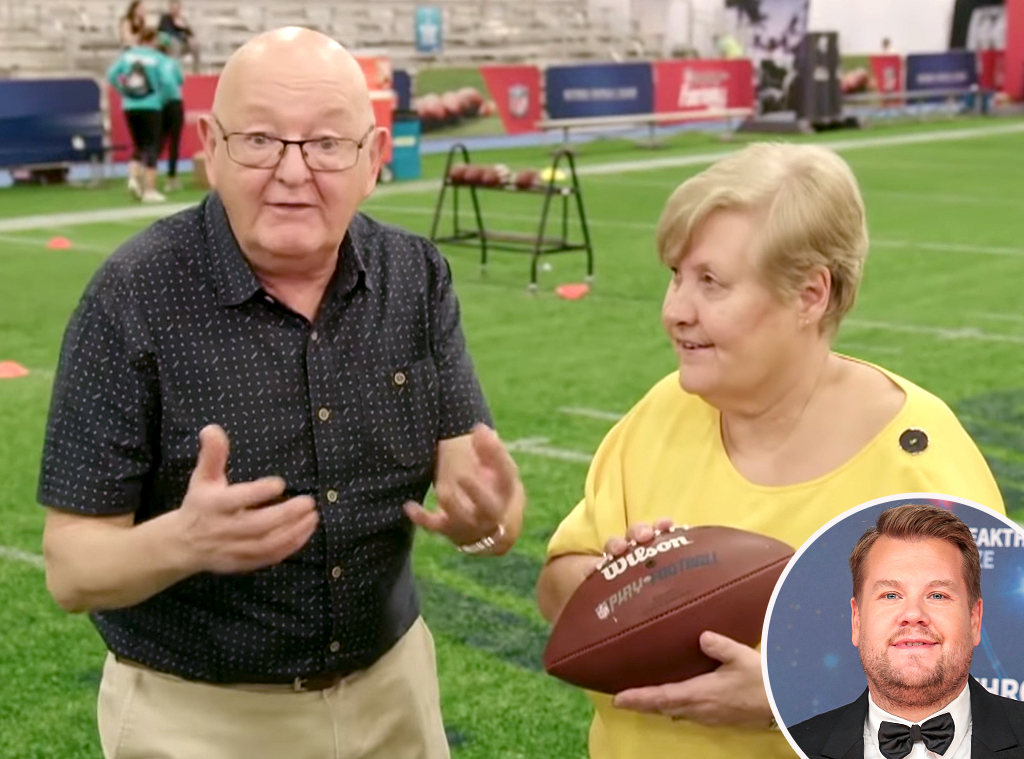 The 2020 Super Bowl was a Corden family affair.

During Super Bowl LIV, James Corden's parents Malcolm Corden and Margaret Corden filled in the for the Cats star for a special segment on The Late Late Show that aired during Monday night's episode. Taking viewers behind the scenes ahead of the big game, James' enthusiastic parents were overjoyed to soak in the of the fun and even met some special guests along the way.

Kicking things off at the NFL Experience inside the Hard Rock Stadium in Miami, the Cordens put their football skills to the test with a series of interactive exhibits. First, they had a friendly catch on the makeshift field and then took some keepsake photos. After a quick lesson with the Kansas City Chiefs Cheerleaders, Malcolm and Margaret made their way to Wilson's football-making demonstration, where they picked up a personalized souvenir for James. Holding up a football with the late night host's face on it to the camera, Margaret exclaimed, "It's so lifelike. This one will probably cause me a lot less strife." 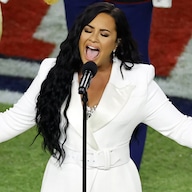 Super Bowl 2020: Most Talked About Moments

Back on the field, Malcolm brought the James football to the end zone and showcased his punting abilities. "I love you son. I'm so proud of you," he said to the football before kicking it into the field goal. "But you never cleaned your room as a kid."

While perusing the NFL Shop, the Cordens ran into Jacksonville Jaguars wide receiver D.J. Chark. After congratulating Chark on a great season, the duo proposed that his new touchdown song should be "D.J. Chark, doo doo," referencing the popular children's song "Baby Shark."

Then, the adorable parents ran into Demi Lovato, who was gearing up to perform the National Anthem. Trying his best to figure out how long the "Anyone" singer's rendition of "The Star-Spangled Banner" would be to secure the bet he had made, Malcolm joked, "If it's more than 2 minutes, then just zip up."

Following their meeting with Demi, Malcolm and Margaret found themselves inside Jennifer Lopez and Shakira's press conference, which took place hours before they delivered their memorable, history-making Halftime Show. Seizing the moment, Malcolm asked the "On The Floor" singer to sing along as he played the saxophone, offering his services for the Halftime Show if needed.

Much to James' dad's delight, Jennifer sang the chorus to "Jenny From The Block" as he played his sax, before telling him, "It's a little low, you're in the wrong key."

Before heading into the stadium to watch the Kansas City Chiefs and the San Francisco 49ers battle it out in the Super Bowl game, Malcolm and Margaret changed into their game day jerseys and met with some of the fans.

As they made their way to their seats, they stopped by DJ Khaled's DJ booth and spun some records with the Grammy winner. And, they even met up with Michael Strahan who was on the field doing some pre-game reporting of his own.

Cheering on the team from the audience during the game, James' folks eventually found themselves on the field as J.Lo and Shakira took the stage. After watching the "She Wolf" singer's performance, Malcolm turned to Margaret and said, "It's Shakira and her hips don't lie. And neither do mine." Feeling a little bitter about J.Lo declining his pitch to play the sax during her performance, he added, "Yeah, she's doing okay but she could have had me up there."

Watch James' parents Malcolm and Margaret take on Super Bowl LIV in the hilarious video above!