If there were an award for funniest speech during award season, Brad Pitt would reign supreme.

The actor swept through all of the major award shows this year collecting accolade after accolade for his performance in Quentin Tarantino's Once Upon A Time... in Hollywood, and that was no different at last night's 2020 Oscars, where he won Best Supporting Actor.

On the red carpet of the 92nd annual Academy Awards, the actor told Variety that his acceptance speeches have been a labor of love between him and his famous friends.

Elaborating on why he chose to make them funny, Pitt shared, "I am historically really bad about speeches. They give me anxiety, I'm tentative going in, so I just decided if I'm going to be doing this, let's see if we can have fun. Let's figure it out and get loose about it."

Yup, the director of Fight Club helped Pitt write his award speech jokes. What a moment. As for the other men Pitt name-dropped, Jeffries and Oschack, they are both comedians.

It was this comedy think tank that helped the Mr. & Mrs. Smith alum come up with hilarious lines like the one in his 2020 SAG Awards speech, when he quipped that he'd need to add a photo of his trophy to his Tinder profile.

At the 2020 BAFTAs, Pitt had Margot Robbie read his speech in his absence. And in it, he poked fun at Brexit and Megxit.

As Robbie shared, "He starts by saying, ‘Hi Britain, heard you just became single. Welcome to the club. Wishing you the best with the divorce settlement.' Blah, blah, blah."

Then, with Prince William and Kate Middleton in the audience, Robbie added, "He says he is going to name this 'Harry' because he is really excited about bringing it back to the States with him. His words, not mine." 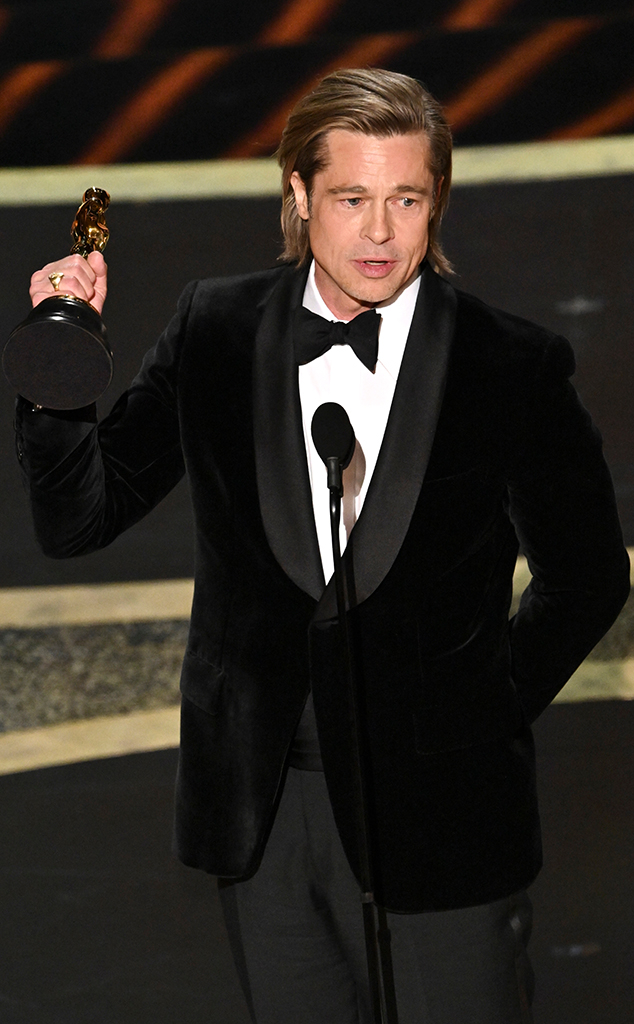 And of course, who can forget the excellent Titanic shade Pitt threw at his OUATIH co-star Leonardo DiCaprio at the 2020 Golden Globes? As he quipped, "I would've shared the raft."

While the 56-year-old kept his positive and lighthearted mood during his Oscars speech, his remarks at film's biggest night did air on the serious side.

"This is incredible, really incredible. Thank you to the Academy for this honor of honors," he started off. "They told me I only have 45 seconds up here, which is 45 seconds more than the Senate gave John Bolton this week. I'm thinking maybe Quentin does a movie about it. In the end, the adults do the right thing."

As he continued, "This really is about Quentin Jerome Tarantino. You are original, you are one of a kind. The film industry would be a much drier place without you and I love the ethos you gave Cliff Booth: Look for the best in people. Expect the worst, but look for the best."

You didn't think he'd get through the whole speech without getting at least one laugh, did you? As the star went on, "Leo, I'll ride your coattails any day, man. The view's fantastic. And to the rest of the cast and crew, big bad Bob Richardson, Robert Garcia, Richie, my man Mike Moh. I always want to say, you know, while we're doing all this, I think it's time we give a little love to our stunt coordinators and our stunt crews."

"Listen, I'm a bit gobsmacked," he continued. "I'm not one to look back, but this has made me do so. I think of my folks taking me to the drive-in to see Butch and Sundance, and loading up my car and moving out here. Geena [Davis] and Ridley [Scott] giving me my first shot. All the wonderful people I've met along the way to stand here now. Once upon a time in Hollywood...ain't that the truth. This is for my kids, who color everything I do. I adore you. Thank you."

He's certainly made this awards season a memorable one.