The Bachelor Rewind: See What Jake Pavelka's Season Looked Like 10 Years Ago Peter Weber is cool, but does anyone else remember The Bachelor's OG pilot?

It's hard to believe that it's been 10 years since Jake Pavelka took flight and went on a journey to find his happily ever after on ABC's hit reality show.

After competing on Jillian Harris' season—and being eliminated before hometowns—the pilot became the lead where he ultimately proposed to Vienna Girardi and said goodbye to runner up Tenley Leopold.

As viewers continue to watch Pilot Pete's journey at finding love every Monday night, it got us thinking: What did The Bachelor look like 10 years ago?

"Ten years ago, social media really wasn't that big. Now, these Bachelor contestants are these big reality stars with all their followers," Vienna shared with E! News exclusively. "You'll see me post once in a blue moon. I feel like it's a lot of ads like they are always trying to market and promote themselves, which has kind of diluted the brand. Now I don't really know if people go on it for the right reasons." Tenley added, "I heard more talk in the house like, ‘If we don't fall in love with Jake, there's always the opportunity for The Bachelorette.' But that was probably the max. Melissa Rycroft had just done Dancing With the Stars and that was kind of fresh 10 years ago. There were some outside opportunities, but that was not the main idea to being on the show."

While the lavish dates and dramatic rose ceremonies remain the same, Jake and Vienna's public breakup proved to be a turning point in the franchise. 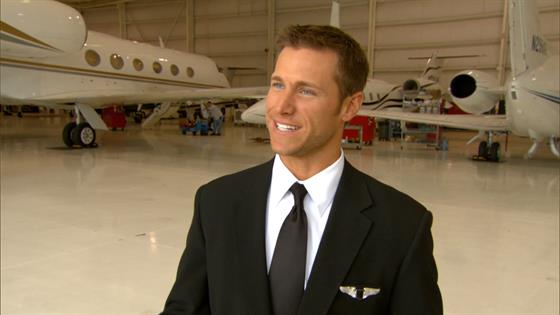 Now Playing
Up Next
Look Back at the First Pilot on "The Bachelor," Jake Pavelka

Unlike previous seasons, tabloids started to treat the couple like true stars. As a result, media coverage was extensive and often times unfairly critical.

"I remember one of the producers saying they were blown away by how big the media was exploiting us," Vienna shared. "She had never seen contestants being on the cover of the magazines the way that it was. They were talking about my family."

The realtor continued, "I think since my season, there has been a lot more crazy and wild things. I look back on my season and I don't even think there was anything that crazy or whatever that even happened. It was more or less creating stuff out of nothing but now I feel like people try to create that." 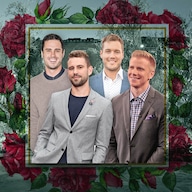 Today, Vienna is focused on working in real estate and trying to keep her personal life more private. As for Tenley, the blogger and certified nutritionist is happily married to Taylor Leopold and "setting our lives up for hopefully a future family someday."

And to this day, both ladies still get recognized from members of Bachelor Nation who want to know: Is the show real?

"My answer for me is it was very real," Tenley admitted. "I had no expectation so it was a very real experience…I'm very much in control and I have ownership of my own thoughts, words and actions…Every eye roll or gasp can be used in context or out of context."

To hear more memories from the show, take a look back in our gallery below. 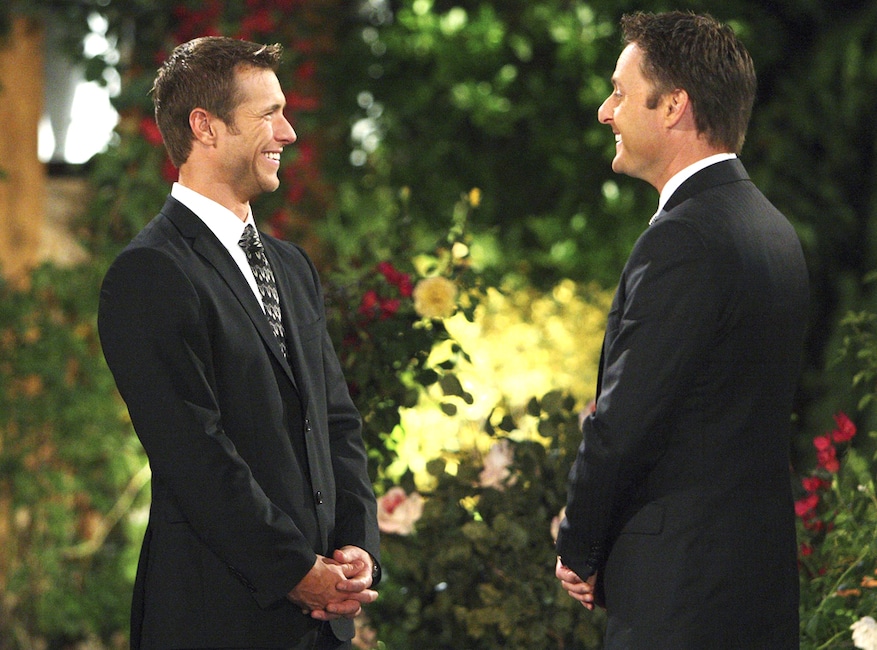 Bachelors may come and go, but one host is forever. Chris Harrison hasn't missed a rose ceremony in the franchise. In fact, he's one of the few confidants for the leads every season. 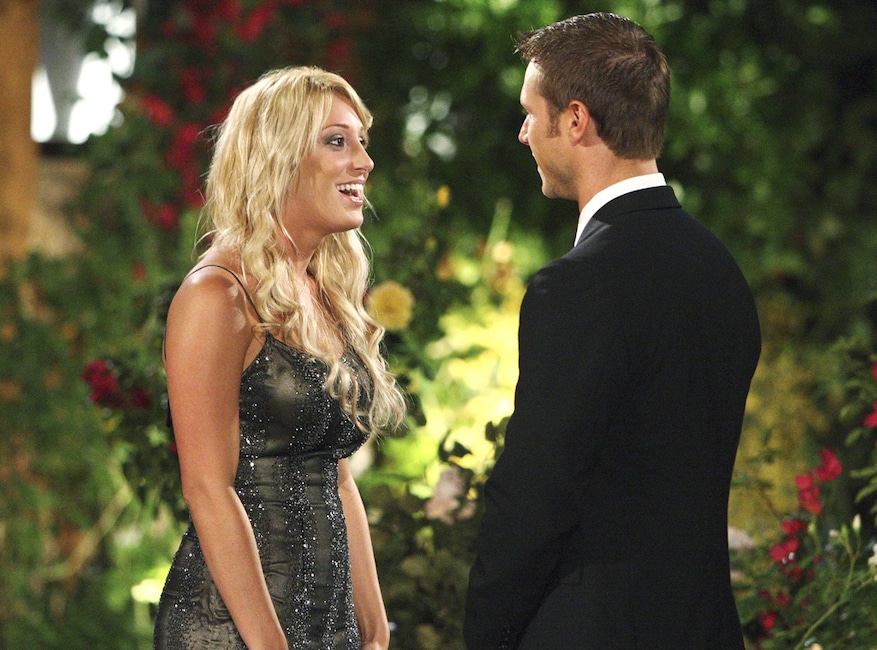 Before any rose ceremony, Jake Pavelka followed Bachelor tradition by meeting every one of his ladies outside the mansion. "I was very naive. You believe everyone has your best interest but they're making a show," Vienna Girardi shared with E! News. "One of the things I learned is be careful what you say and remember you have your best interest—not everybody else." 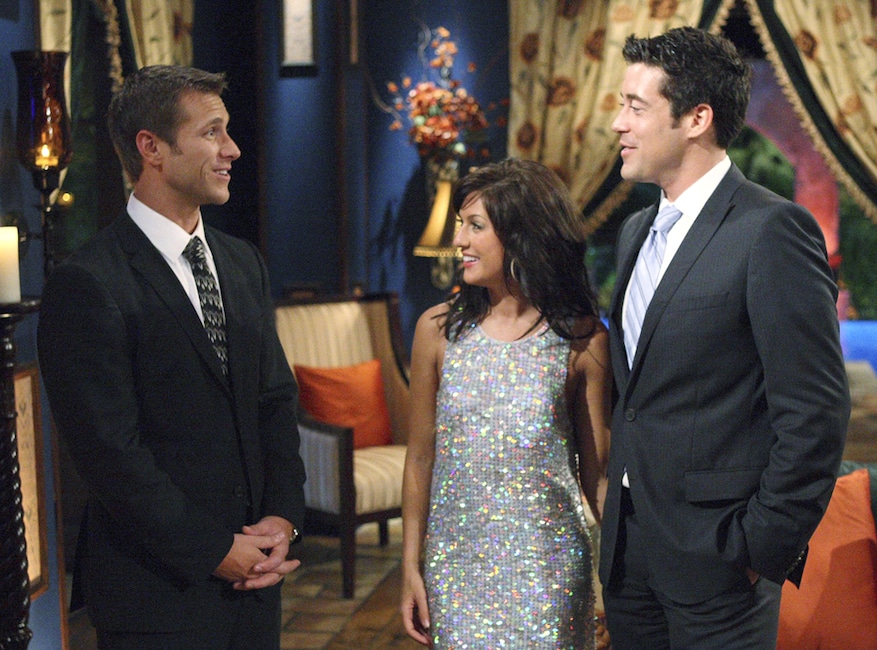 Blast From the Past

After appearing on the fifth season of The Bachelorette, Jillian Harris and her then-fiancé Ed Swiderski stopped by the mansion to give Jake some helpful advice. 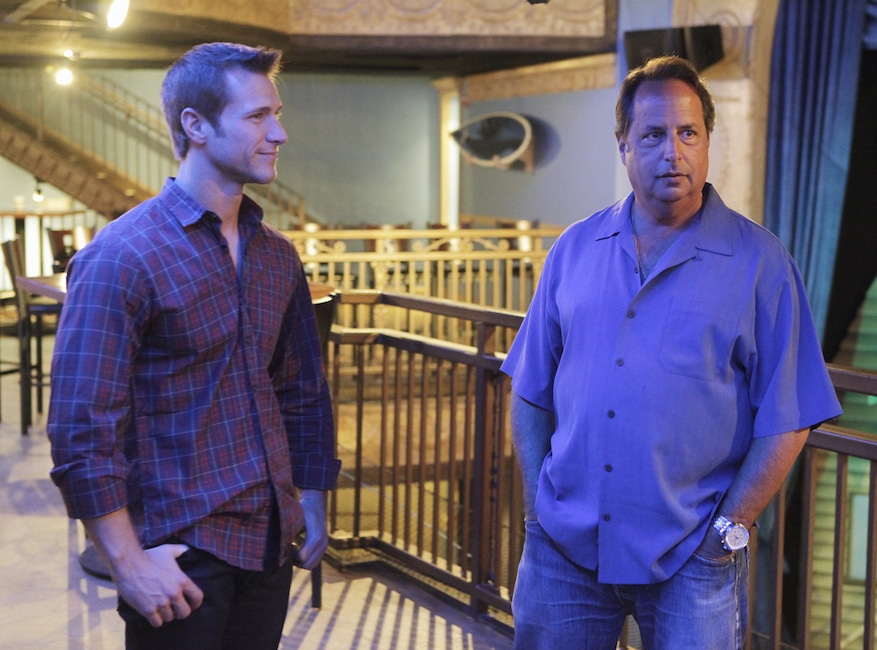 "My first date on the show was a group date and we did comedy with Jon Lovitz," Tenley Leopold recalled to E! News. 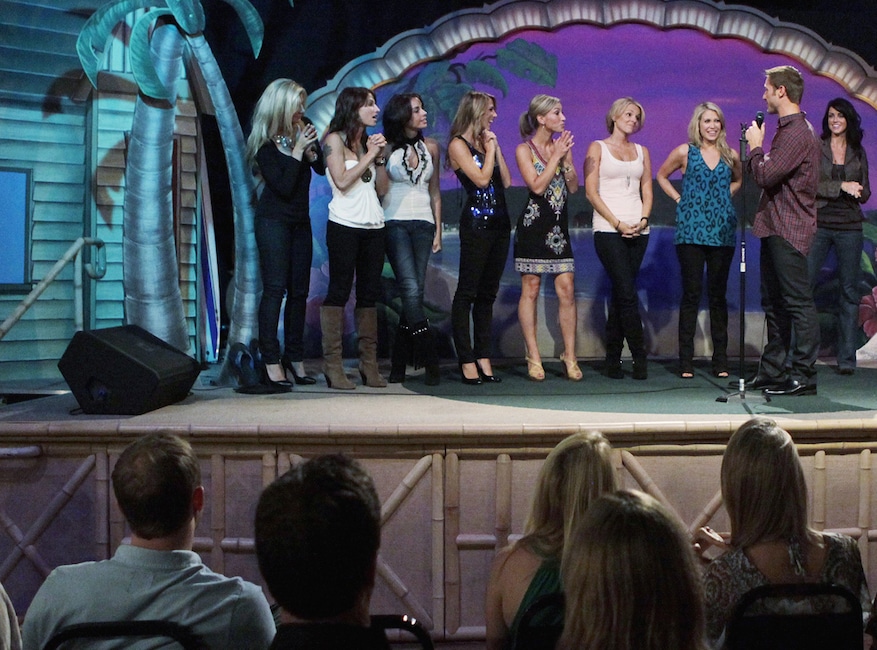 "I went out onstage and basically broke all the rules my mom told me not to do before going on the show," Tenley revealed to us. "Those three were not to say, 'That's what she said.' The Office was huge back then. I talked potty humor and she said don't put your legs over your head, but I did the pretzel onstage." 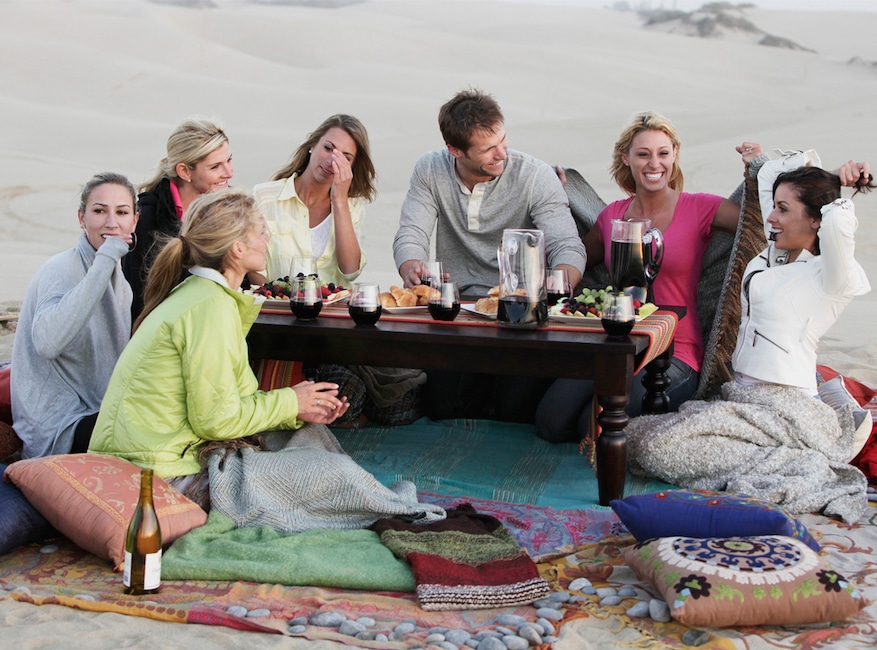 "I hadn't really traveled much outside of where I grew up," Vienna shared with us when recalling a memorable date. "We actually took a road trip in a big RV and we took it down the coast of California to San Francisco. For me, that was so exciting because it was my first time ever seeing a big city and experience that kind of city life. It was fascinating to me." While the show focuses on dates and one-on-one time with The Bachelor, Vienna loved spending time with her co-stars. "My favorite part of the show was the girls. The majorty of the time is spent with the girls—cooking dinner, drinking wine, hanging out. It's basically like a 24-hour sleepover party the whole time," she shared with us. "That's the best part of the whole Bachelor. People don't realize that we're having so much fun together and getting to know each other and you only see one part of the show." 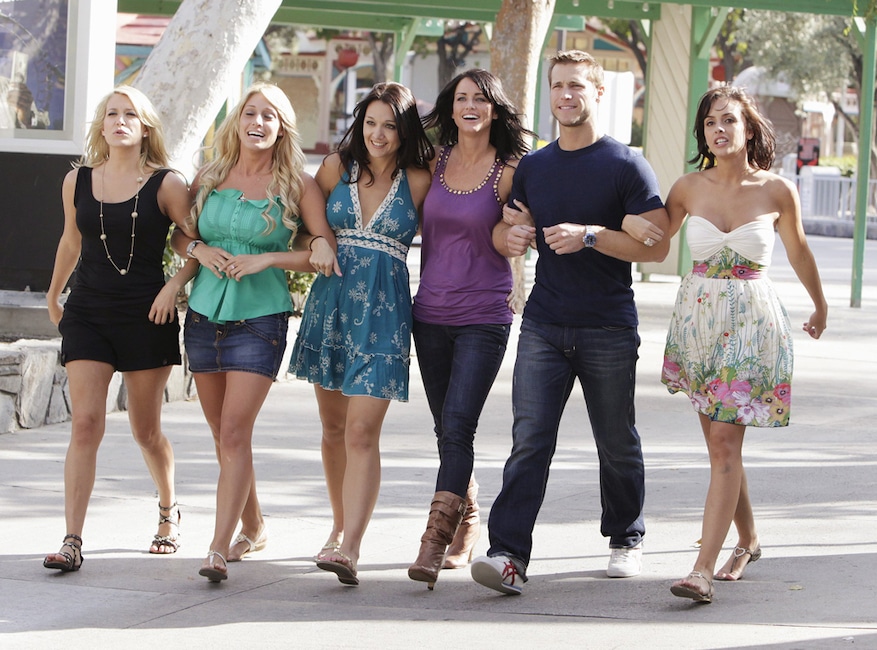 During a group date, Jake treated Vienna and other potential suitors to an afternoon at Six Flags Magic Mountain. 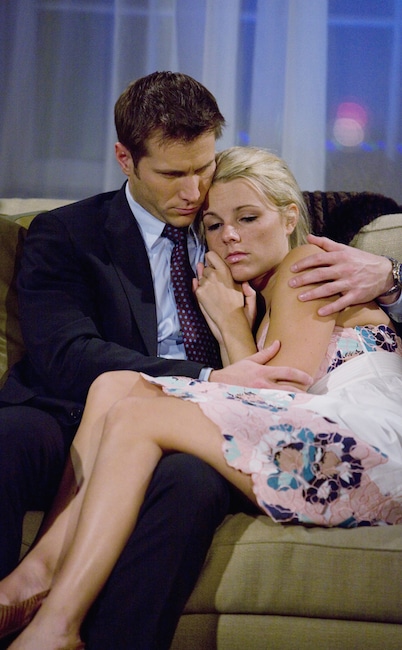 Before becoming The Bachelorette, Ali Fedotowsky made it to the final four of Jake's season. Today, the fan-favorite is happily married to iHeartRadio Valentine in the Morning host Kevin Manno and they have two children together. He's Got the Bling 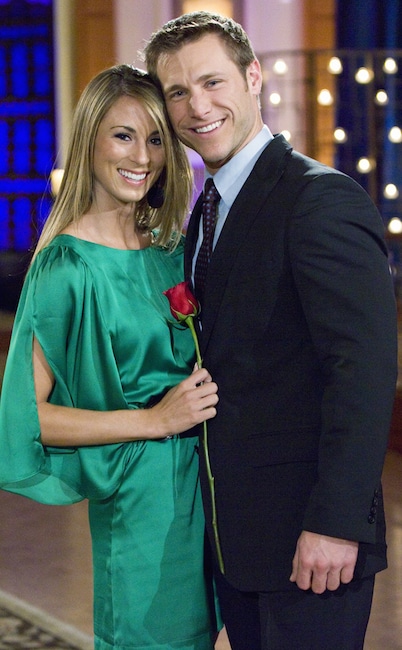 "When I was in St. Lucia, right before the proposal would be happening, we were driving from one side of St. Lucia to the other and all of my producers and camera men in the van were asleep and I looked out the window and I saw a double rainbow," Tenley shared with us when recalling the final days of the show. "I was overwhelmed with this peace that I'm going to be okay." 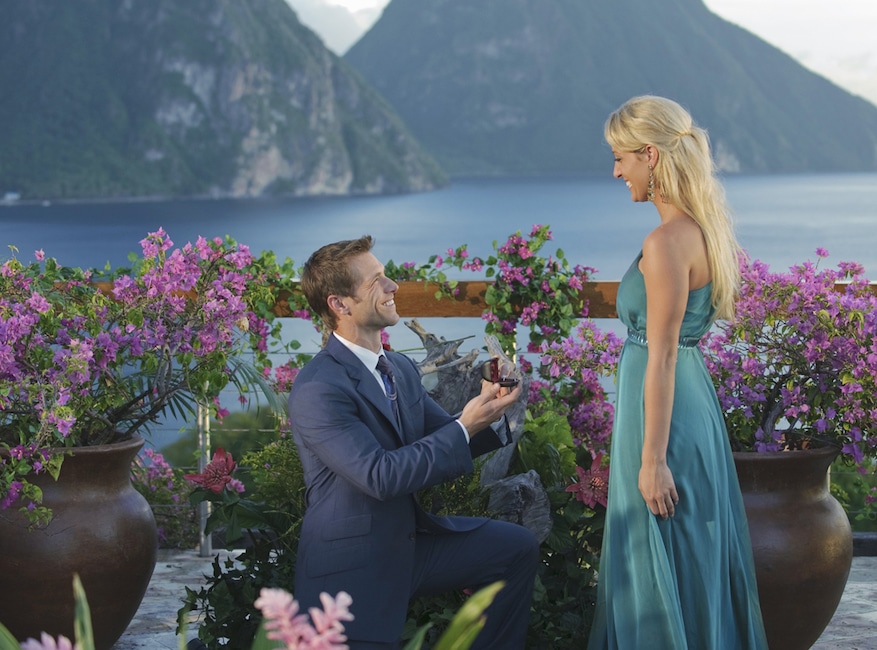 In a fairy-tale ending, Jake would get down on one knee and propose to Vienna in the March 2010 finale. The couple would later split up in June 2010. 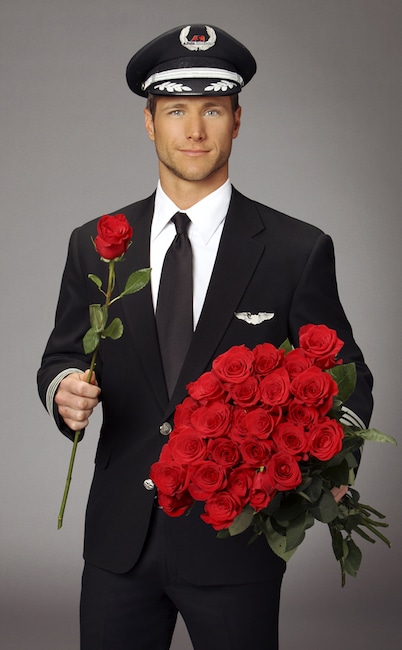 10 years after appearing on The Bachelor, Jake is much more private. "I've been very curious as to what he's been up to. I hope everything is well with him...I hope that he's well," Tenley shared with us. Vienna added, "I think after you've been in the public eye for as long as he was, you learn to appreciate your privacy a little more. I like my privacy now. I work a normal job. I'm back in my hometown. Sometimes, you realize that lifestyle is not for you and you have to take a step back."

The Bachelor airs Monday nights at 8 p.m. only on ABC.