It's Prince Harry and Meghan Markle to the rescue!

After the Duke and Duchess of Sussex spotted two hikers struggling to take a selfie in Canada on New Year's Day, the couple swooped in and offered to take the trekkers' photo.

So, how did this royal run-in occur? According to CTV News Vancouver Island, Iliya Pavlovic and Asymina Kantorowicz had just finished their a picnic at Horth Hill Regional Park when they decided to capture the picturesque moment. After struggling with a selfie stick, the two caught the attention of a nearby group. While the hikers were checking out the snaps, one of the group members came over to offer some assistance.

"She starts asking if we want her to take a photo for us," Kantorowicz, who works for CTV News Vancouver Island, told the news outlet. "We said sure. I didn't see who she was at that time."

That volunteer just so happened to be the duchess—and she wasn't alone. According to the outlet, Kantorowicz noticed Meghan's former Suits co-star, Abigail Spencer, was also there.

"I froze up. I actually couldn't believe who it was," Kantorowicz told the outlet. "Then I looked over to the side and that's when I realized Prince Harry was standing there. I kept looking back and forth like, 'Is this actually happening?'"

Of course, the hikers accepted Meghan's offer to take the picture.

"In that moment the only thing I could think to say [was], 'There's only so much that selfie sticks can do,'" Kantorowicz told CTV News. "She laughed and responded with something like, 'We'll have to do better,' and then Harry said, 'No pressure.'"

The royal duo then reportedly wished Kantorowicz and Pavlovic a happy new year and went on their way. In fact, Kantorowicz suspected she and Pavlovic didn't "put the pieces together right away because they were so casual, so friendly [and] so down-to-earth."

"We didn't see any bodyguards with them," she told E! News. "It was just the three of them, two dogs and they just seemed like a group of friends casually going out for a hike, and we see hikers all the time on the island when we are out...They were just so casual and friendly. It was obviously so unexpected." 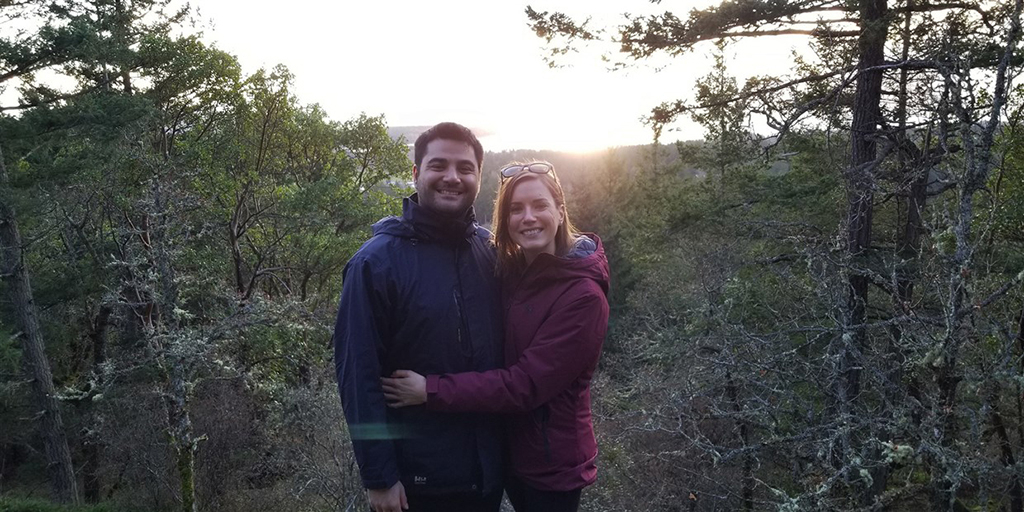 Kantorowicz told E! News Harry and Meghan were dressed in "everyday clothes," including rain jackets. She also confirmed that their son, Archie Harrison, was not with them at the time.

While some admirers would have asked the royals to join them for a picture, Kantorowicz said this didn't cross her mind.

"We did not ask for one," she told E! News. "After the fact, once it sort of sunk in. Once they left, we kind of realized maybe we should have asked for that photo. But honestly, they were just so friendly and went out of their way to help us and they didn't have to approach us, and we wouldn't have realized it was them otherwise. I'm kind of glad that we didn't. We didn't want to interrupt, or pester them, or hound them for a photo. I'm sure they get that a lot. It seemed like they were just trying to have a nice day outside and get some privacy and I'm glad that we didn't."

As fans are well aware, Harry and Meghan have been spending some "private family time" in Canada over the holidays.

"They are enjoying sharing the warmth of the Canadian people and the beauty of the landscape with their young son," a spokesperson for the Sussexes stated.

Of course, Meghan's connection to Canada goes way back. She actually lived in Toronto while she was filming Suits, and Harry visited her in the early days of their relationship.

Needless to say, that photo is one for the memory books!