The Real Housewives of Orange County's season 14 finale was heated on more counts than one.

"I'm the worst one to control my alcohol," Judge said lightly in a clip from the RHOC After Show Tuesday night, noting a self-described lack of "boundaries." Sitting opposite her during the post-episode sit-down, Kirschenheiter recounts the onscreen confrontation.

"I'm pretty sure I pulled you out of a bush this year," she reminded her co-star.

And cut to: Tamra, tipsy, teary-eyed and shouting at Gina outside Vicki's engagement gathering. Though Kelly Dodd's attendance was clearly the source of her frustration (due to her communication with former RHOC personality Alexis Bellino's ex-husband Jim Bellino, who's leveraging an expensive defamation case against Tamra), Judge unleashed her upset on Kirschenheiter after a brief interaction with Dodd ended with her storming out of the venue. 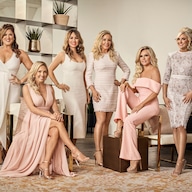 "If somebody was going after you, I would protect you in every f--king sense of the way," Tamra cried, suggesting Gina hadn't handled the previous exchange the way she'd hoped. Moments earlier, when it was obvious Tamra was less than pleased to see Kelly inside, Gina asked her friend what was wrong, since she'd been under the impression that the women had "talked it out" already. A handful of f-bombs later and Tamra was out the door with Gina trailing close behind.

"What do you want me to do, Tamra?" Kirschenheiter called out as her screen partner shuffled across the venue's front lawn. Before we knew it, Judge was full-on bawling between the branches of some sprawling outdoor shrubbery and telling her friend to "f--king go away." During the After Show, Judge cited Kelly as the catalyst for her behavior.

"When Kelly walked in, it was just hard for me to even look at her," she explained, calling Dodd's correspondence with Bellino "the ultimate betrayal."

Also at odds with Kelly during Tuesday's finale was fellow RHOC star Shannon Storms Beard, whose tangential involvement in the defamation suit (she was originally implicated alongside Judge, but the charges against her were ultimately dismissed) meant she had feelings about Dodd inserting herself into their legal business too.

"I finally had the chance to come up to Kelly and say, 'Do you think it was right for you to immerse yourself into my personal business that you know has been emotionally and financially devastating on me?'" Beard recalled during her After Show appearance. Suffice to say, Dodd didn't take kindly to her comments. "Her answer was, 'Yes. You're a liar,'" she finished.

Of course, the evening's interpersonal drama was joined by a handful of unrelated but nonetheless memorable moments (essentially all of which managed to unfold during Vicki's soiree). Around the time Shannon and Kelly's acquaintanceship went up in flames, so too did Shannon's hair, courtesy of a lit candle she didn't notice flickering beneath her when she leaned over the bar.

Even wilder than the incident itself was Gunvalson's solution. "Flipping tequila on my hair to put the fire out!" Beard remembered, emphasizing that the move "should have made [the fire] bigger," but thankfully, "somehow put it out." Innovation is key, people!