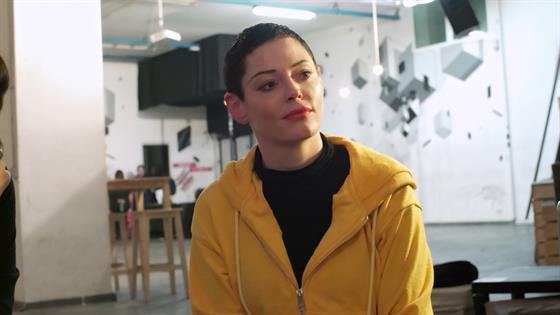 The Time's Up Foundation is speaking out against a multi-million dollar settlement Harvey Weinstein recently reached with dozens of women who accused him of rape and sexual harassment in civil lawsuits.

On Wednesday, hours after he appeared in court for a hearing on separate and similar criminal charges, the New York Times reported (citing attorneys involved in the negotiations) that the disgraced Hollywood producer and the board of his bankrupt film studio secured a tentative $25 million agreement, under which he would not have to admit wrongdoing or pay anything himself to the accusers, made up mostly of more than 30 actresses and former Weinstein employees. Insurance companies representing the Weinstein Company would foot the bill, and the deal, which still requires final approval by a court and all parties, would bring to an end nearly every such lawsuit against the producer.

Weinstein, 67, who has denied all allegations of non-consensual sex, has not commented on the report.

"This settlement is more than a math problem—it's a symptom of a problematic, broken system that privileges powerful abusers at the expense of survivors," Rebecca Goldman, Chief Operating Officer of TIME'S UP Foundation, said. "While this settlement is flawed, we know it represents the hard work of several survivors of Harvey Weinstein. We hope it brings them, and perhaps others, some small measure of justice and relief that is long overdue."

The New York Times reported that the payout to the accusers would be part of an overall $47 million settlement intended to close out the Weinstein's company's obligations and that more than $12 million of it would cover part of the legal costs for the producer, his brother Bob Weinstein and other members of their company's board.

In its statement, Time's Up estimated that none of Weinstein's alleged victims would receive more than $500,000.

"If this is the best the survivors could get, the system is broken. #TIMESUP," the group tweeted.

Time's Up was created soon after a small group of women went public with their accusations against Weinstein in October 2017. Their allegations also sparked the #MeToo movement, in which scores of mostly women worldwide have come forward with sexual misconduct accusations against men, including powerful figures in entertainment, media and politics. Time's Up recently launched a petition to "show survivors that millions are behind them."

"Today and every day, TIME'S UP is in solidarity with the more than 80 survivors who bravely spoke out against Weinstein, catalyzing a worldwide reckoning for justice," Goldman said in Time's Up's statement. "With them, we will continue to fight until sexual harassment and assault at work are gone for good."

At his criminal case hearing on Wednesday, Weinstein arrived using a walker and had his bail increased after prosecutors accused him of purposely not wearing his electronic ankle monitor properly. He has pleaded not guilty to charges he raped a woman in a New York hotel room in 2013 and performed a forcible sex act on a different woman in 2006, and could face life in prison if convicted.

Weinstein's trial is set to begin next month.