It was a star-studded night in the Big Apple as celebrities gathered at the New York Hilton Midtown for the 30th Annual GLAAD Media Awards.

The organization, which honors "media for their fair, accurate and inclusive representations of the lesbian, gay, bisexual, transgender and queer (LGBTQ) community," hosts awards shows in both Los Angeles and New York. The L.A. show occurred on March 28 and honored Beyoncé and Jay-Z with the Vanguard Award, where the "Formation" singer gave a heartfelt and tearful speech about her uncle who died of HIV.

GLAAD's President and CEO Sarah Kate Ellis explained in a statement in February why Madonna was the ideal choice for the Advocate for Change Award this year.

"Madonna always has and always will be the LGBTQ community's greatest ally and it is only fitting to honor and celebrate our biggest advocate at GLAAD's biggest event ever," Ellis said. 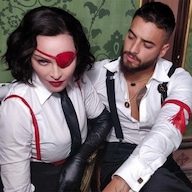 Ellis continued, "From the HIV crisis to international LGBTQ issues, she fearlessly pushes for a world where LGBTQ people are accepted. Her music and art have been life-saving outlets for LGBTQ people over the years and her affirming words and actions have changed countless hearts and minds."

Madonna made history by receiving this award. She became the first woman ever and only the second person to be honored with it. Bill Clinton was the first in 2013.

Madonna's A League of Our Own co-star Rosie O'Donnell helped present the award to the star.

During her speech, Madonna talked about watching her close friends die from AIDS and about visiting Malawi during its AIDS epidemic, leading her to adopt four of her six children.

During the awards, Madonna made a $25,000 donation to the organization, E! News has learned.

Cohen's achievement is just as important. The Vito Russo Award is given to an open LGBTQ person in the media who has helped bring about more acceptance to the community. GLAAD wrote in a statement that Cohen "consistently speaks out on LGBTQ issues on the show including marriage equality, anti-transgender legislation, and hate violence against LGBTQ people."

Take a look at the photos below to see what some of your favorite stars wore to the event on Saturday evening. 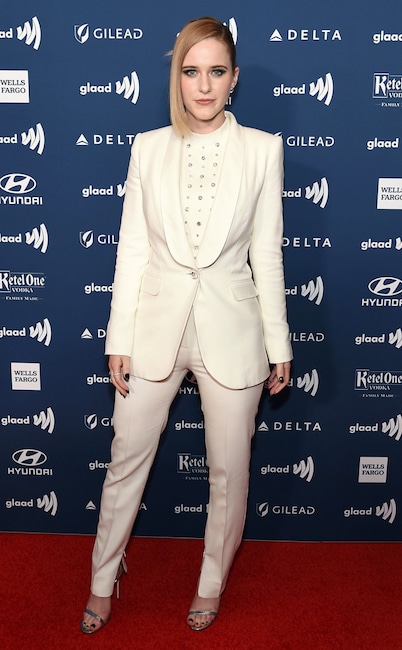 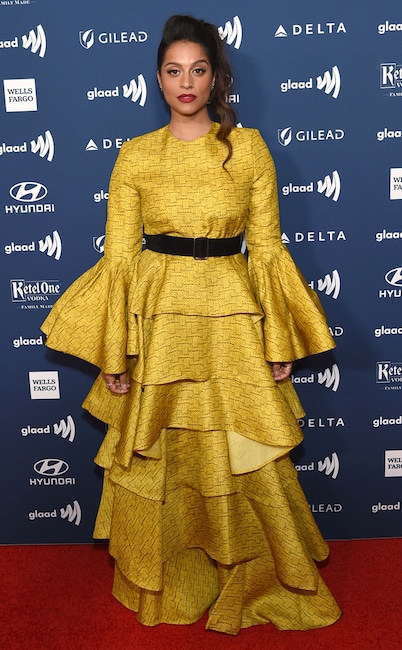 The YouTube star, who recently came out as bisexual, shimmers in her yellow folded dress. 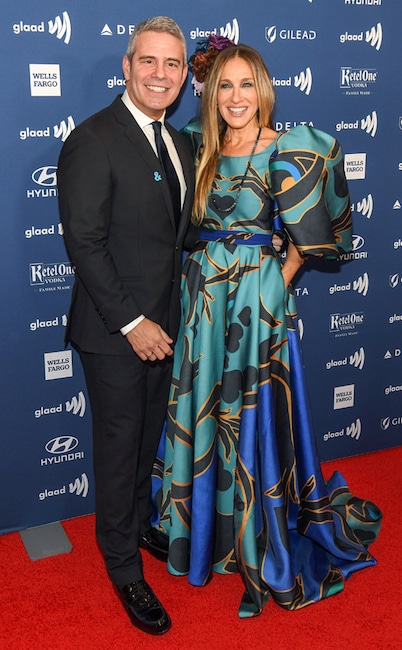 The BFFs look happy as can be on the red carpet before the event. Jessica Parker presented Cohen with the Vito Russo Award at the ceremony. 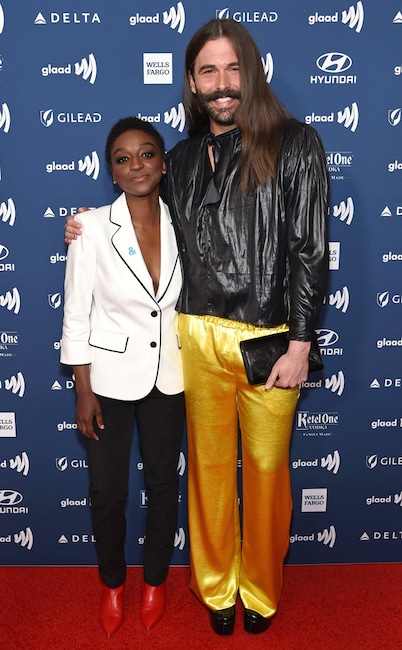 The Queer Eye star brings season 3 fan favorite Jess Guilbeaux as his date to the GLAAD Media Awards and they both look FAB. 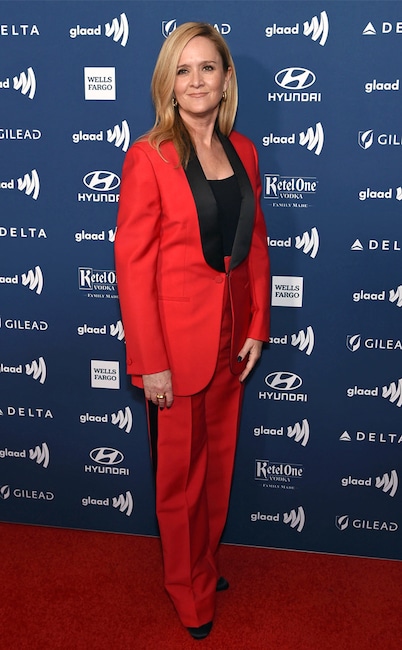 No funny business here! The Full Frontal with Samantha Bee host stands out in her red suit with black lining. 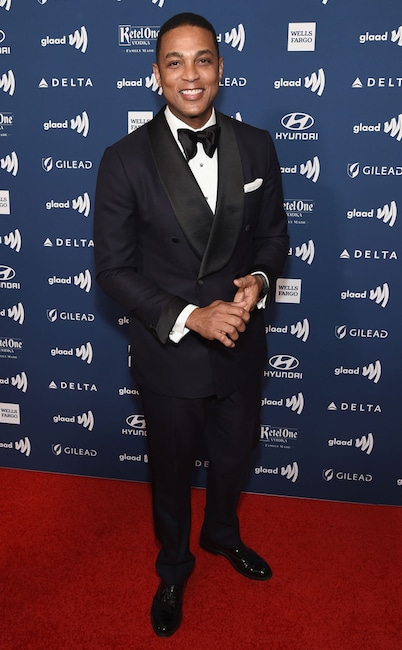 The CNN host smiles wide in a navy and black tuxedo. Lemon recently got engaged to his longtime partner Tim Malone! 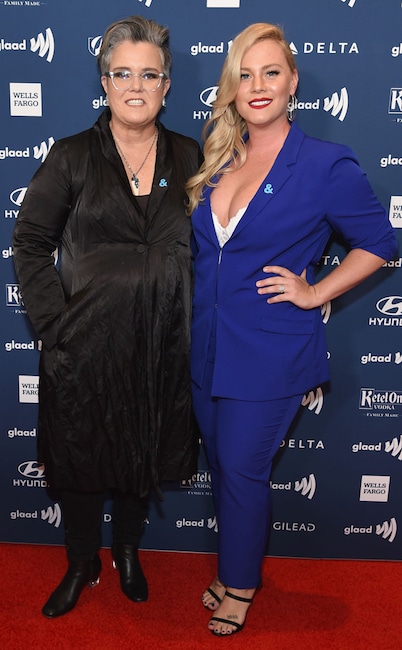 Rosie O'Donnell looks chic in an all-black outfit while Rooney opts for a royal blue suit. 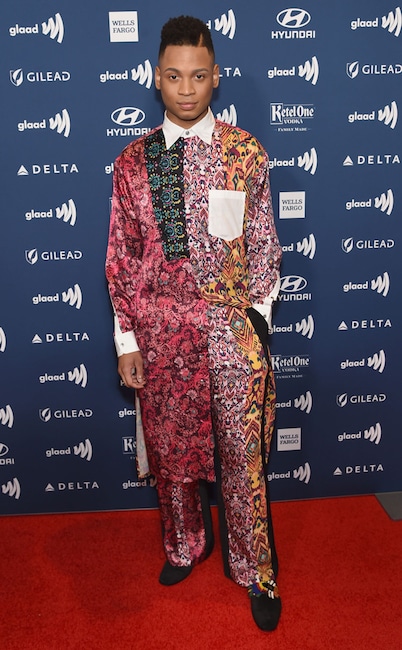 The Pose actor goes all out with patterns on the red carpet at the 2019 GLAAD Media Awards in New York City. 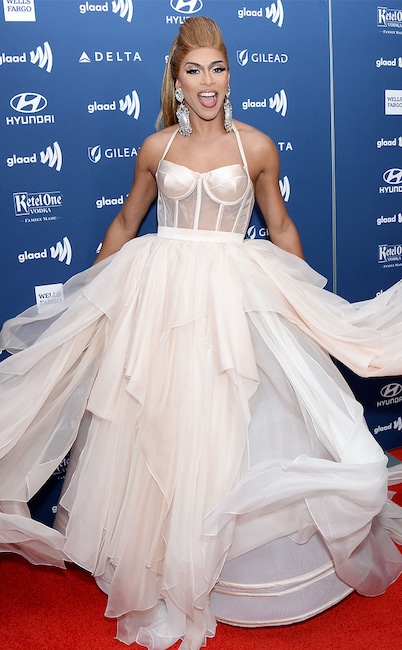 The GLAAD Media Awards New York host is a show-stopper in a corset-top dress with a hoop skirt and huge earrings. 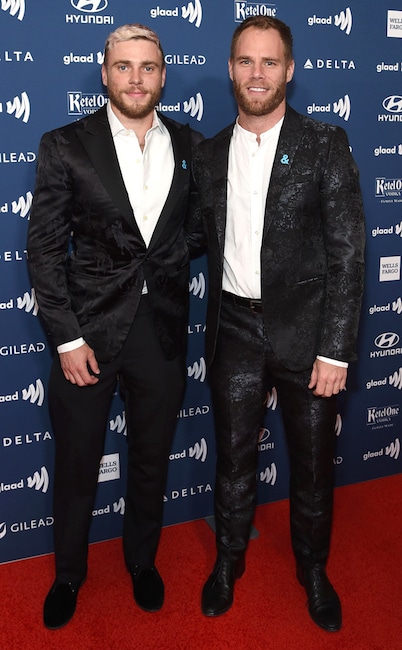 The Olympian and his boyfriend wear nearly-matching suits to the awards show in New York. 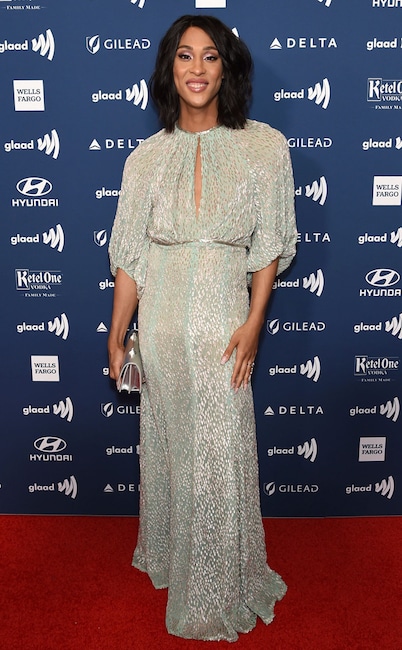 The Blanca Rodriguez-Evangelista actress shines in a silver dress on the red carpet at the 2019 GLAAD Media Awards. 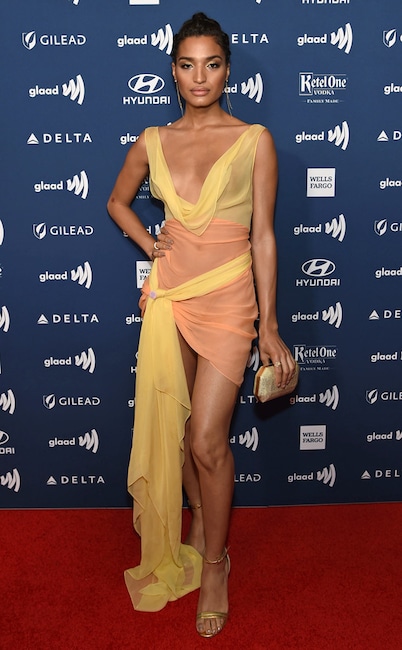 Indya Moore shows off their toned legs in a short peach and yellow dress on the red carpet in New York. 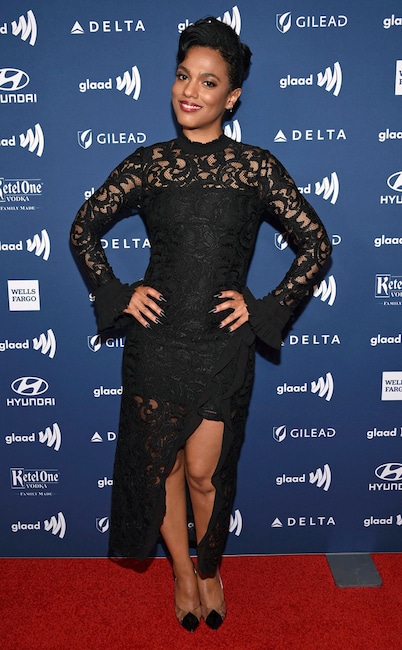 The Doctor Who star smiles in a form-fitting black dress with lace trim across the top. 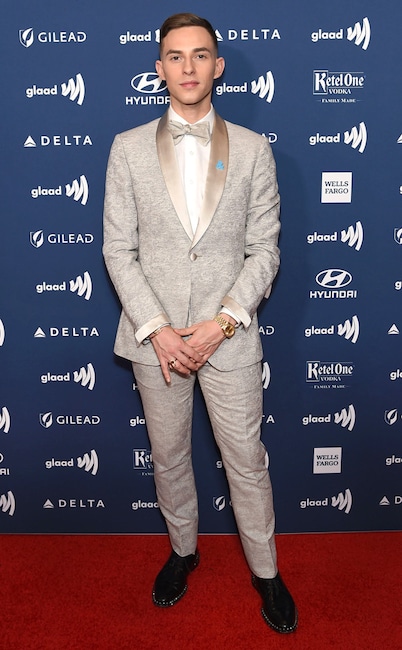 The Olympian looks sleek in silver. 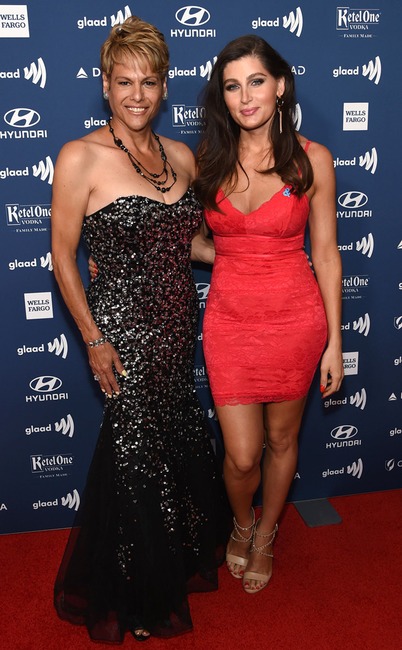 The Transparent stars both exude elegance before the awards show in the Big Apple. 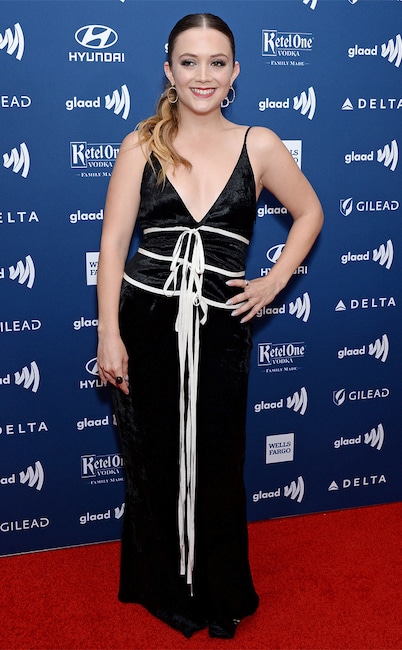 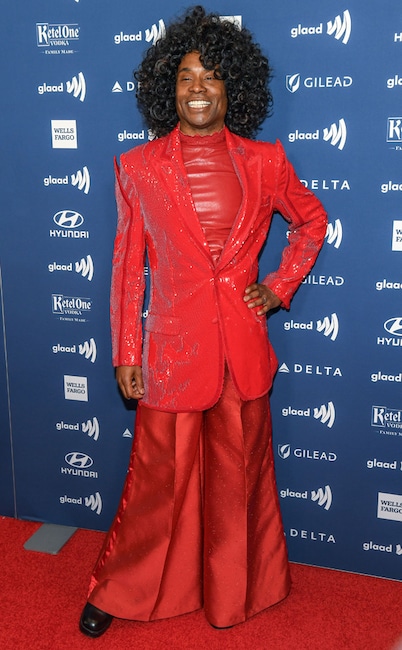 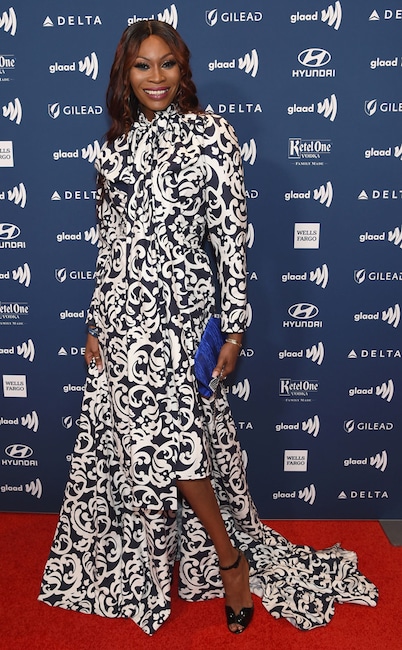 The Pose star smiles in a gorgeous patterned blue and white dress on the red carpet. 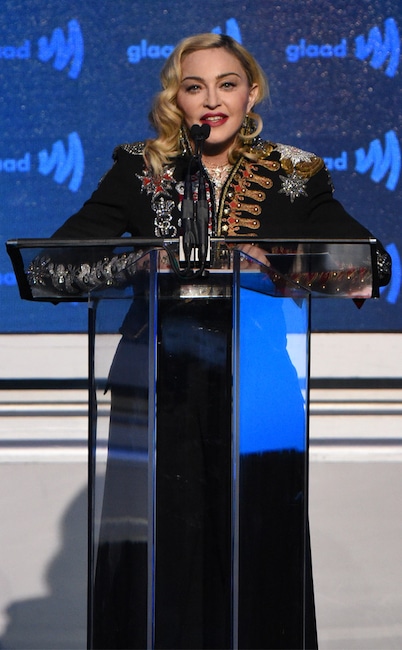 The Queen of Pop gives a speech after accepting her Advocate for Change Award.

The 30th Annual GLAAD Media Awards will air on Logo on Sunday, May 12 at 8pm ET/PT.