From Dallas to Game of Thrones: TV's Most Memorable Cliffhangers 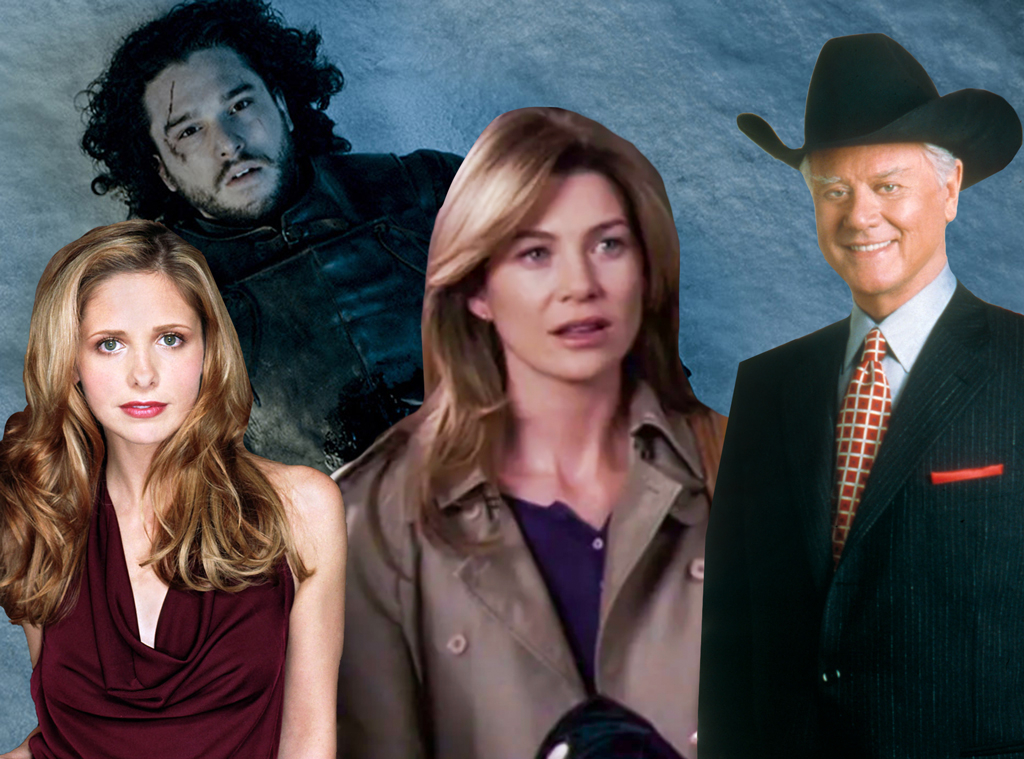 The cliffhanger is an indelible and inescapable part of the television viewing experience. And whether we like it or not, we're about to suffer through a whole bunch of them.

With the need for social distancing amid the global coronavirus pandemic having already brought Hollywood to a grinding halt, beloved shows like Grey's Anatomy have been forced to wrap their seasons early, leaving plotlines dangling off a cliff until the industry can get back to business. Whenever that may be.

However unplanned these cliffhangers heading our way may be, they're not necessarily a bad thing. It's been 40 years since Dallas practically invented the practice, as the CBS soap wrapped up its third season on March 21, 1980 with the villainous J.R. Ewing (the late, great Larry Hagman) shot by an unknown assailant, leaving fans to debate the now infamous question "Who shot J.R.?" until the show returned that fall. And since then, we've been subjected to countless surprise twists in the final moments of episodes of some of our favorite shows. And nearly all of them have made the increasingly fleeting communal experience of watching TV all the more enjoyable. 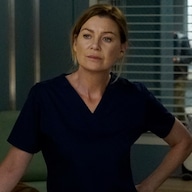 In honor of 40 years since "Who shot J.R.?" we thought we'd take a walk down memory lane and relive 20 of the most memorable cliffhangers to ever grace our TV screens. Oh, and it should go without saying, but there are (decades old) spoilers ahead. Enjoy! 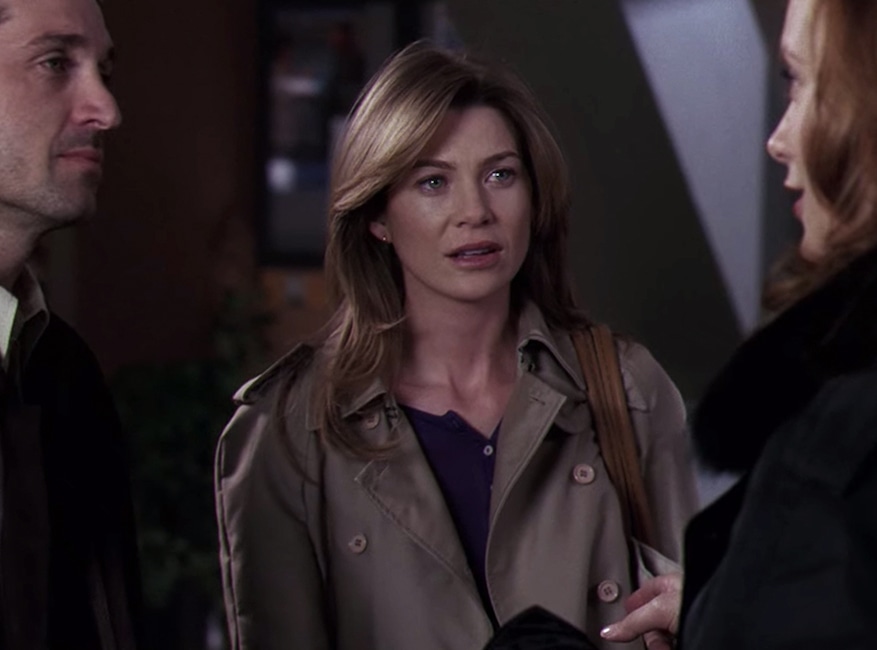 Shonda Rhimes threw poor Meredith (Ellen Pompeo) and all of us watching at home for quite a loop in the final moments of Grey's Anatomy's first season with the arrival of Addison Montgomery (Kate Walsh), who walked right up to Mer and Derek (Patrick Dempsey) and introduced herself with the now iconic "And you must be the woman who's been screwing my husband." Oops. 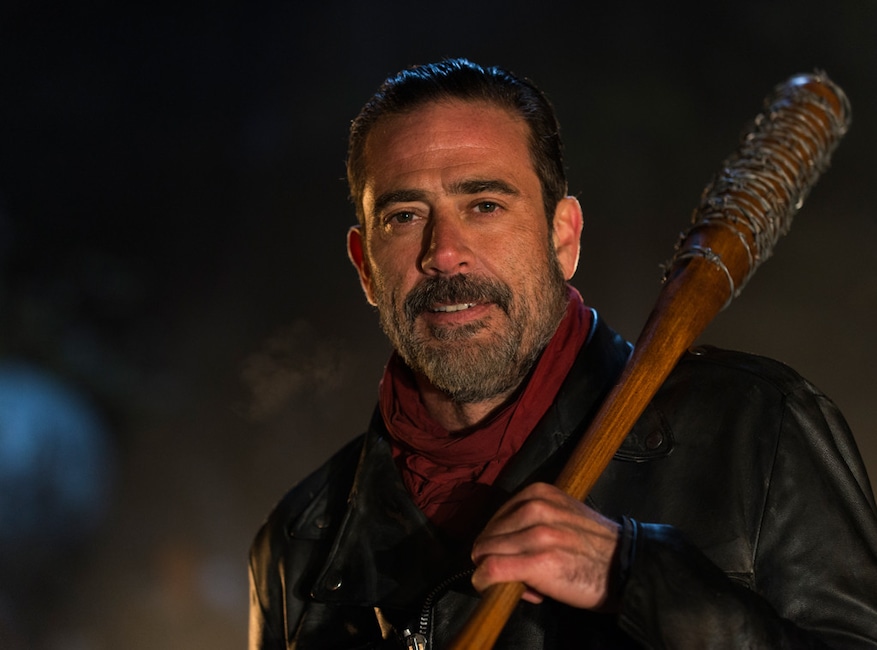 All throughout the sixth season of AMC's zombie thriller, the villainous Negan (Jeffrey Dean Morgan) loomed large, as did the promise that he'd off someone we'd come to love. By the season finale, a particularly intense episode even by TWD's standards, it was clear that Negan and his beloved Lucille (a baseball bat covered in barbed wire) would be doing the deed, but by episode's end, we just watched it from the POV of the victim, leaving us to wait six whole months before the identity of the deceased was revealed as we watched the whole sickening scene unfold again. (Twist: It was two somebodies, Glenn (Steven Yeun) and Abraham (Michael Cudlitz).) 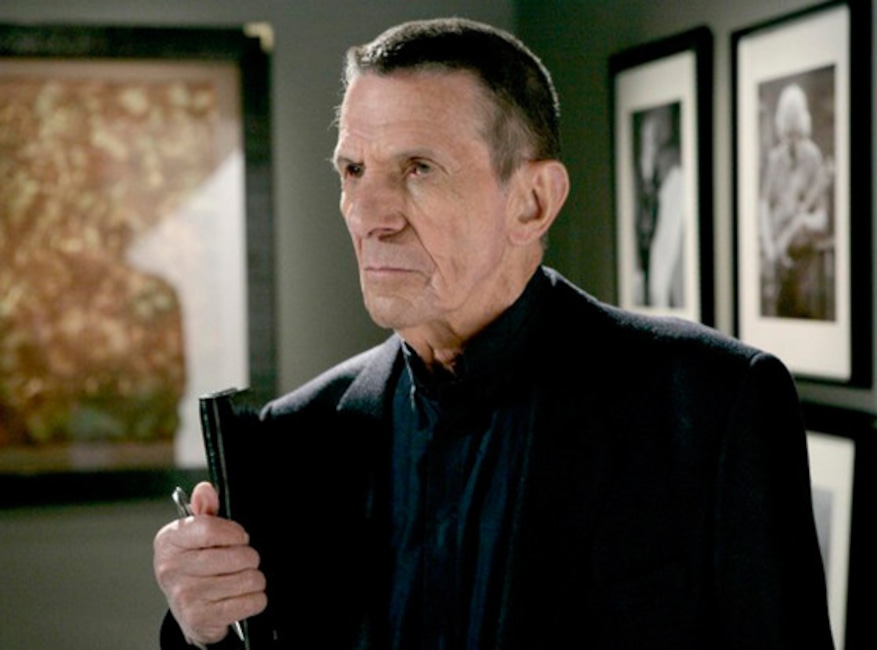 The season finale of Fringe's first season had everyone's mouths on the floor when we learned that Olivia (Anna Torv) had unknowingly traveled to a parallel universe for a meeting with Leonard Nimoy's shady Dr. William Bell. How did we learn this? Oh, with the last shot of the season, a pan out to reveal that the two were standing inside the South Tower of the World Trade Center, which was still standing. We'd have to spend four months ruminating on that shocking image before the show returned to reveal what was going on. It was only a matter of time before burgeoning meth kingpin Walt White (Bryan Cranston) and his DEA agent brother-in-law Hank (Dean Norris) found themselves barreling towards one another on a collision course. And that moment finally arrived in the final frames of season five's midseason finale when Hank, looking for something to read while on the toilet in Hank's bedroom, opened a book with an inscription that fingered him as the notorious Heisenberg. The show wouldn't return for nearly a full year to ease our anxiety over what would come next. (And when it did, it certainly was not pretty.) Few cliffhangers on this list were more heartwrenching than the surprise that arrived at the end of ER's 13th episode in its sixth season when Dr. John Carter (Noah Wyle) was stabbed by a mentally unwell patient and fell to the floor, only to discover that poor Lucy Knight (Kellie Martin) had been attacked too. The wait to learn of their fates (he survived, she did not) may have only lasted seven days, but it was truly agonizing. 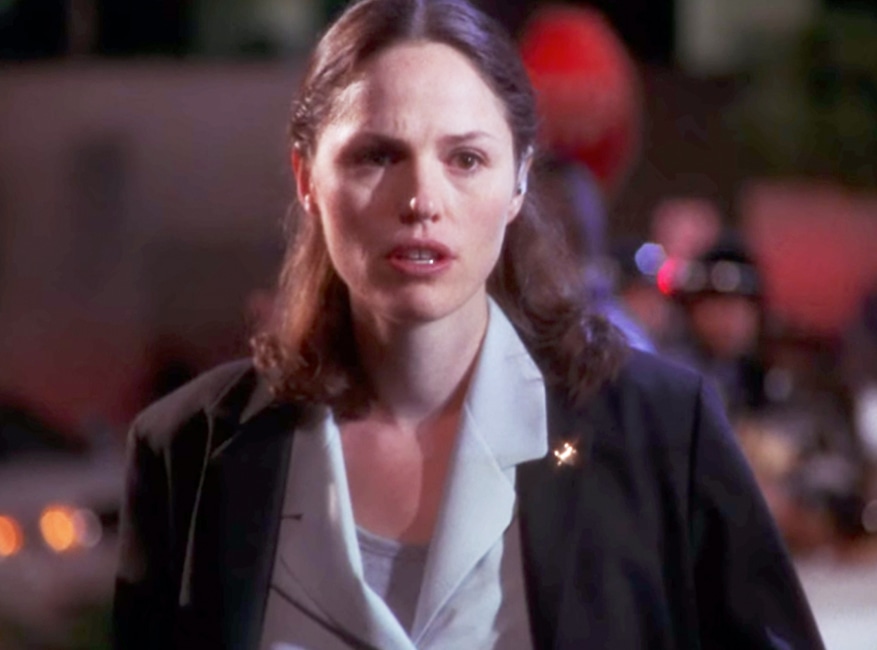 Aaron Sorkin left fans of his idealistic White House drama to worry all summer long after ending the first season with the entire Bartlet administration fired upon by an unknown gunman as we hear a Secret Service agent asking over the radio "Who's been hit?! Who's been hit?!" Five months later, the season two premiere would reveal that President Bartlet (Martin Sheen) and Josh (Bradley Whitford) had both been shot, but both survived. 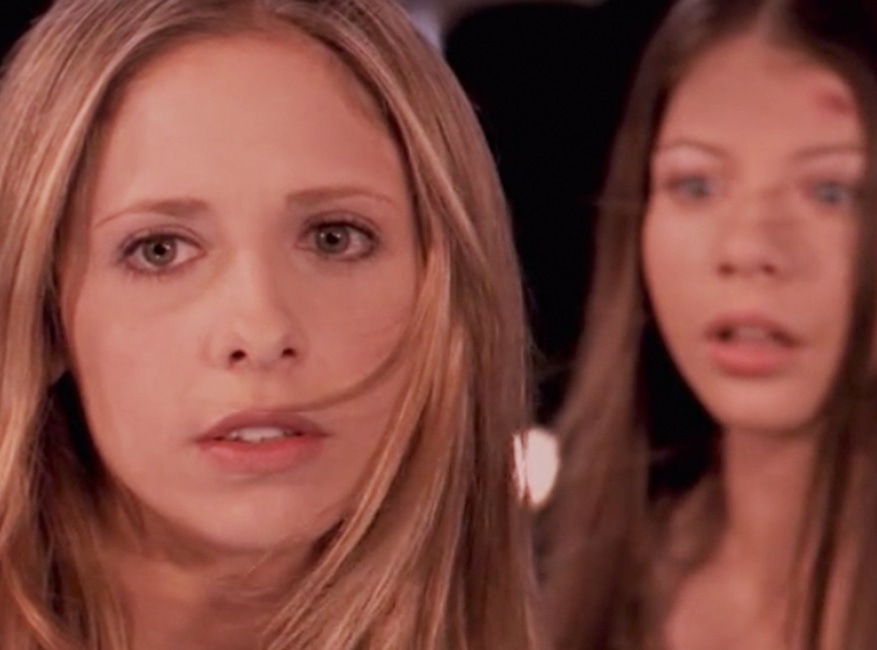 Sarah Michelle Gellar's titular heroine had died before, but something about her sacrificing herself to save her sister Dawn (Michelle Trachtenberg) and seal an apocalyptic portal between dimensions hit harder. Maybe it was because we actually saw her tombstone which read "She saved the world. A lot." Or maybe it was because the fifth season finale was also the last to air on the WB before the show moved to UPN over the summer. Either way, the wait from May to October to see how the Scooby Gang would resurrect Buffy was rough. 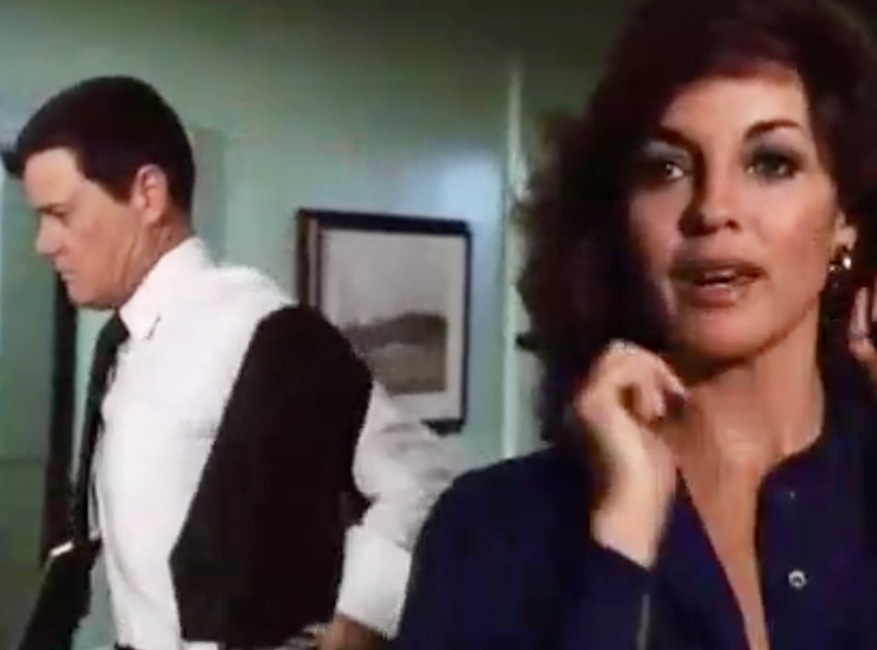 The one that started it all. At the end of Dallas' third season in 1980, fans of the CBS soap were left hanging after watching Larry Hagman's dastardly J.R. Ewing gunned down by an unidentified assailant. An estimated 83 million viewers tuned in eight months later when, in the fourth episode of the fourth season, his would-be assassin was finally revealed. 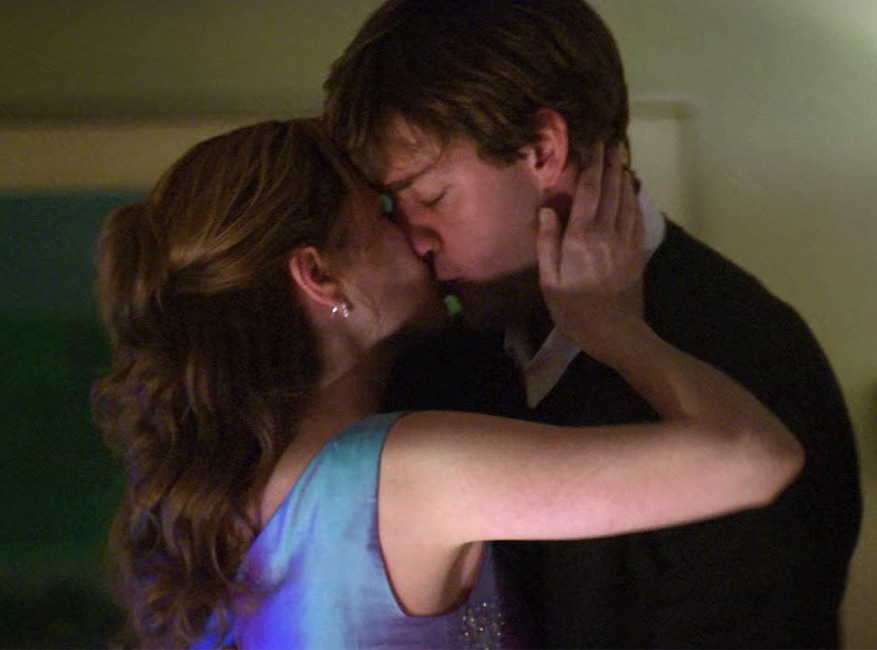 After two seasons of clear attraction between Jim (John Krasinski) and Pam (Jenna Fisher), the second season finale—aka "Casino Night—ended with the two finally sharing a kiss after he admitted to her that he wanted to be more than friends. With the two starting at each other in a bit of "What now?" silence, fans would have to wait four months for the answer to that question. (Pam still stayed with Roy, though ultimately calling off the wedding at the last minute, and Jim transferred to the Stamford branch.) 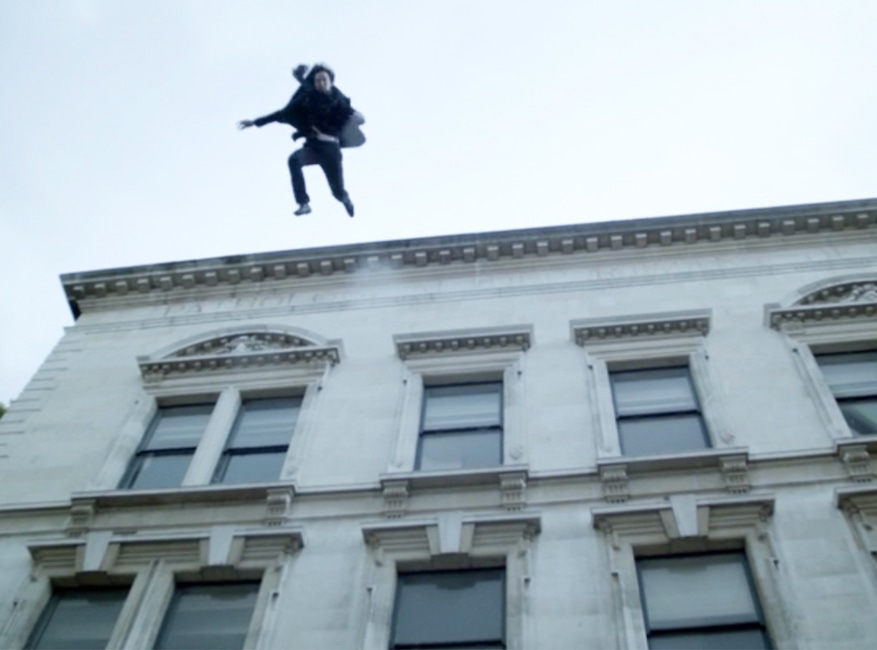 We all saw Sherlock (Benedict Cumberbatch) fall to his death in final episode of the second season. So how exactly, in the final moments, was he there watching John (Martin Freeman) from afar as he visited his friend's grave? We'd have to wait two full years (!) to find out. 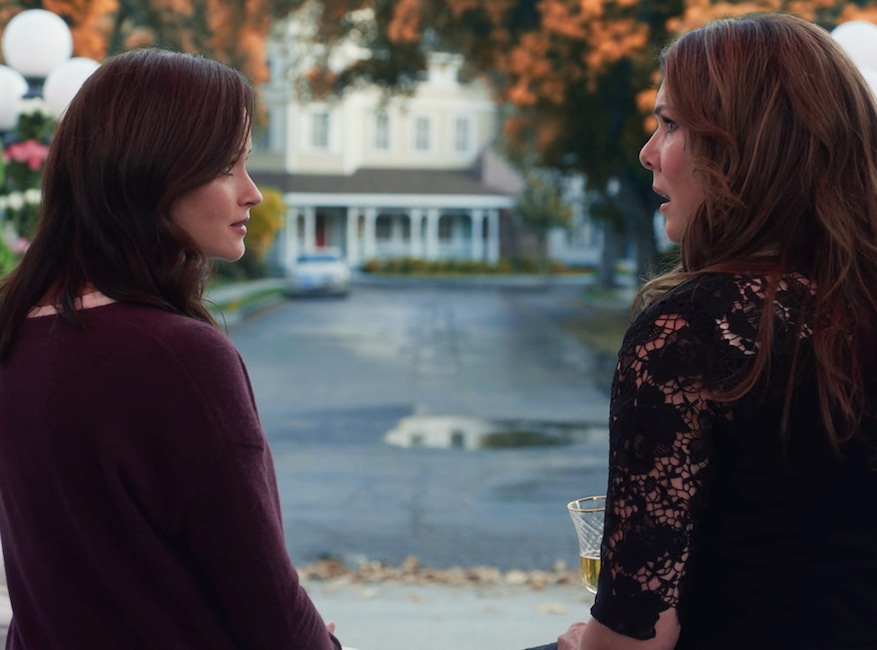 Gilmore Girls: A Year in the Life

In the final moments of Netflix's Gilmore Girls revival, fans finally got to hear creator Amy Sherman-Palladino's planned four final words. Who knew that the last two of them, as Rory (Alexis Bledel) turned to mom Lorelai (Lauren Graham) and said, "I'm pregnant" would leave us wondering, possibly forever, what happens next. 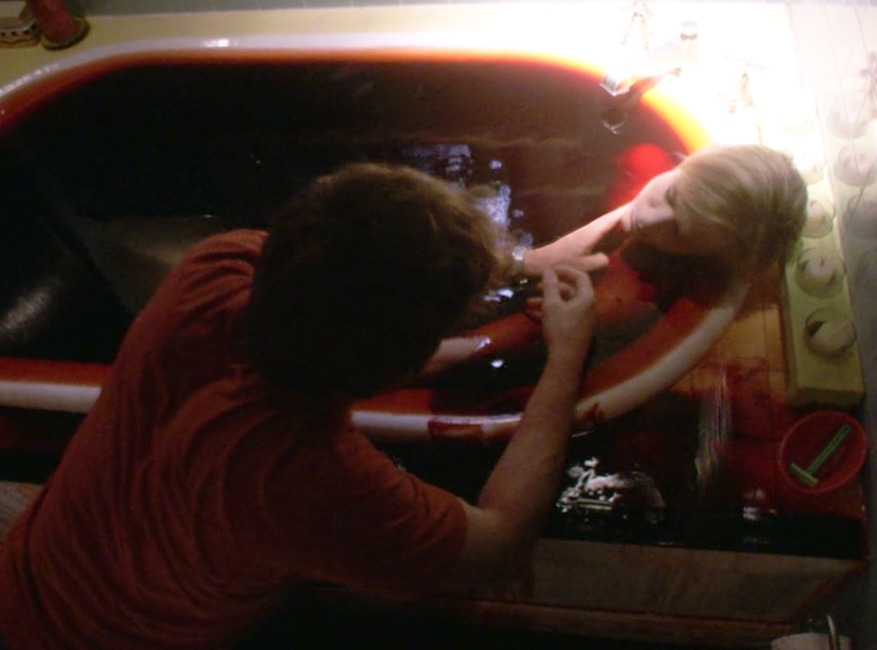 Just when it looked like Dexter (Michael C. Hall) had offed Arthur (John Ligthgow) before the man known as the Trinity Killer could come between him and his family in the season four finale, he returned home only to find that he hadn't been fast enough and his beloved Rita (Julie Benz) had paid the ultimate price, dead in the bathtub as their infant son Harrison sat crying in a pool of her blood. Brutal. 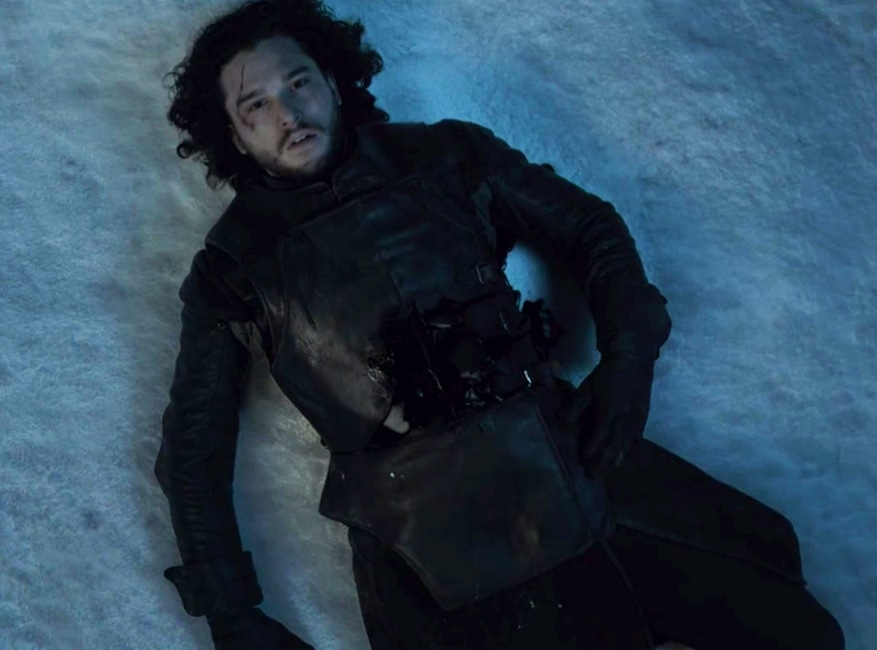 When the Night's Watch turned on Jon Snow (Kit Harrington) in the finale of the HBO hit's fifth season, with each member stabbing the bastard before leaving him for dead, we were all left to wonder whether the show notorious for offing its most prominent character had just done it again. It would be 10 months before we would learn Jon's true fate. 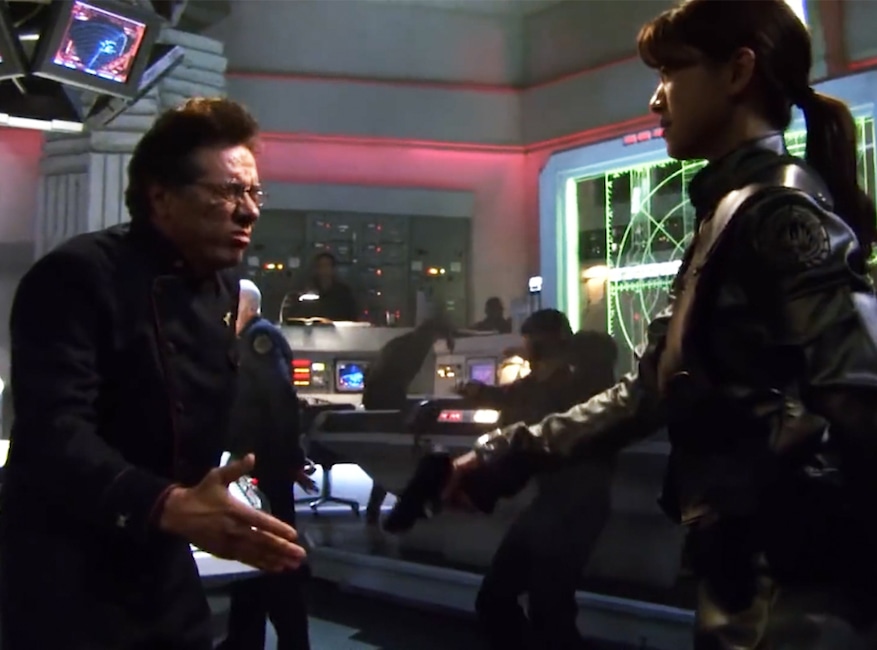 Just as Starbuck (Katee Sackhoff) put it together that Boomer (Grace Park) was a Cylon in the first season finale of Syfy's acclaimed reboot of the sci-fi series, the duplicate shot Commander Adama (Edward James Olmos) twice in the torso, leaving fans to wait three whole months to wait and see if he would survive. 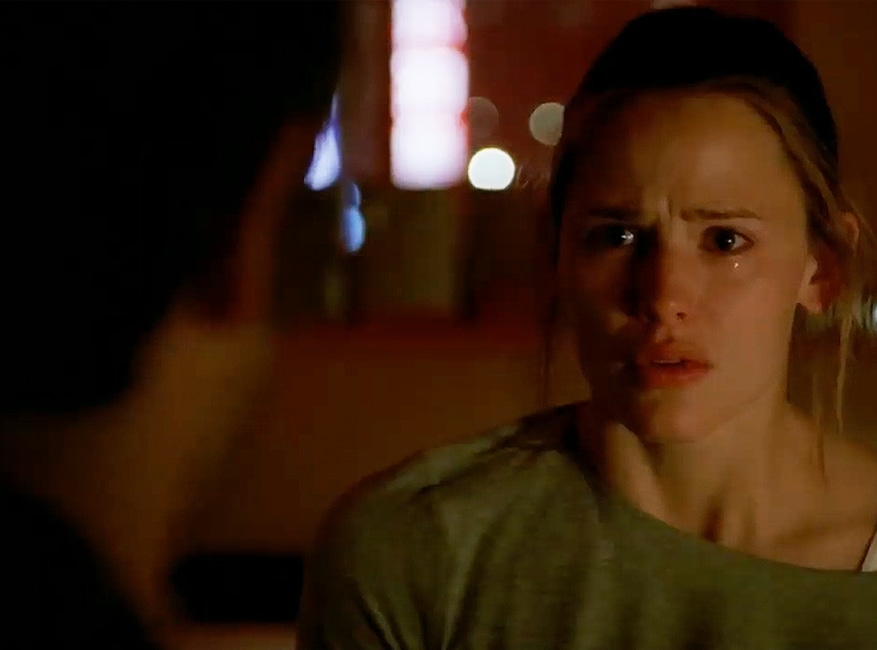 Alias' second season finale was a real doozy. Not only did Sydney (Jennifer Garner) finally learn that Francie (Merrin Dungey) wasn't Francie, forcing her to kill someone who looked just like her best friend, but she then woke up in Hong Kong where a concerned Vaughn (Michael Vartan) told her she'd been missing for two years. Oh, and he was married now. It would be four months until we learned just what the hell was going on. 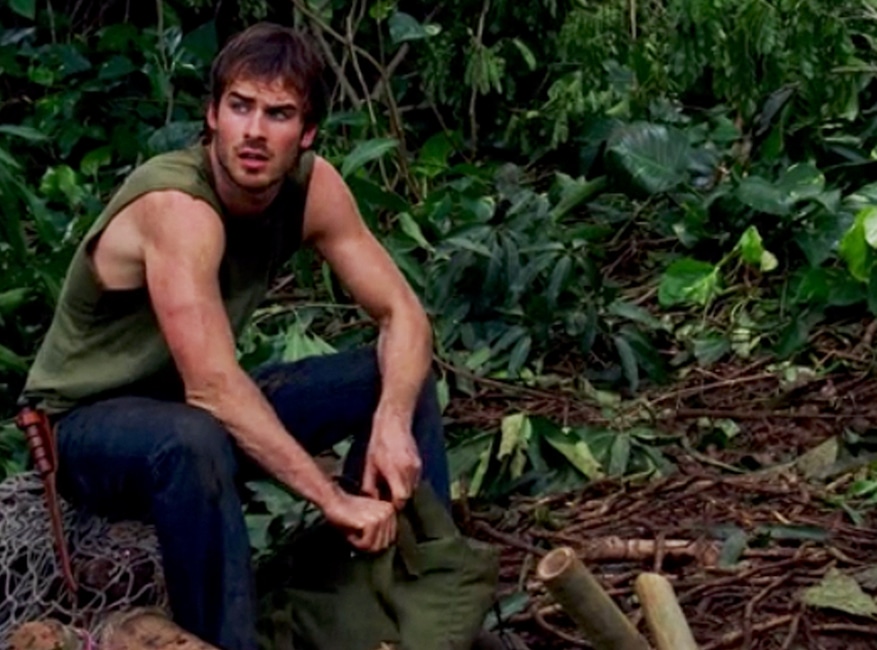 Lost mastered the art of the cliffhanger in its day, but none were as electrifying as the moment at the end of the first season's 19th episode when the window on hatch that John Locke (Terry O'Quinn) had been obsessively trying to open suddenly illuminated, hinting that there might be even more life on the island to discover. Fans of the ABC mystery would have to wait until the beginning of season two to learn just what was inside. 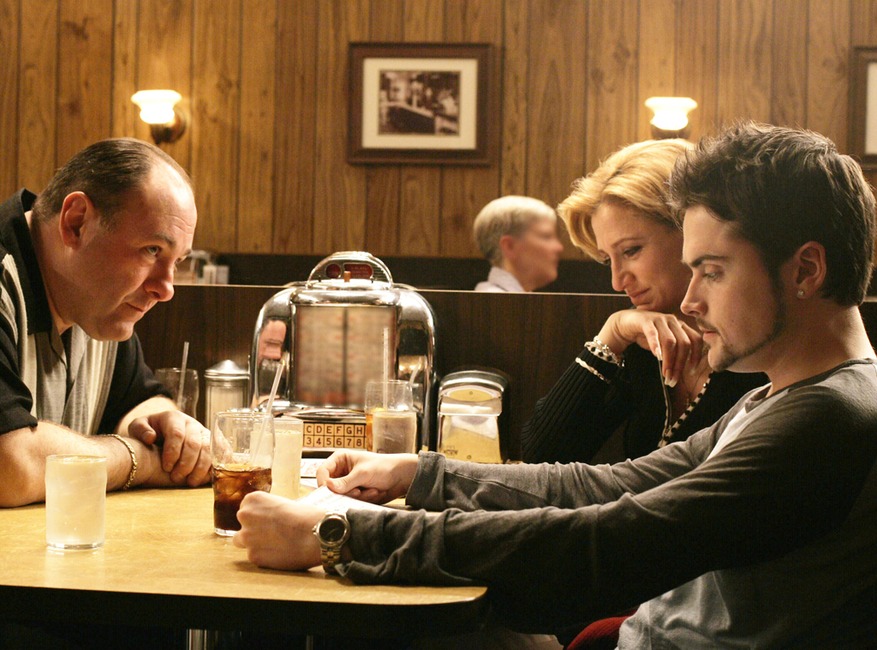 Perhaps the most infamous cliffhanger on this list because of the fact that so many believe it never should've been one. In the final moments of The Sopranos' series finale, Tony (James Gandolfini) and the fam were enjoying some onion rings, Meadow (Jaime-Lynn Sigler) couldn't park her car, and someone entered the diner before a cut to black. Was it just Meadow finally joining her folks and brother? Or did the life finally catch up with Tony? We'll never know. 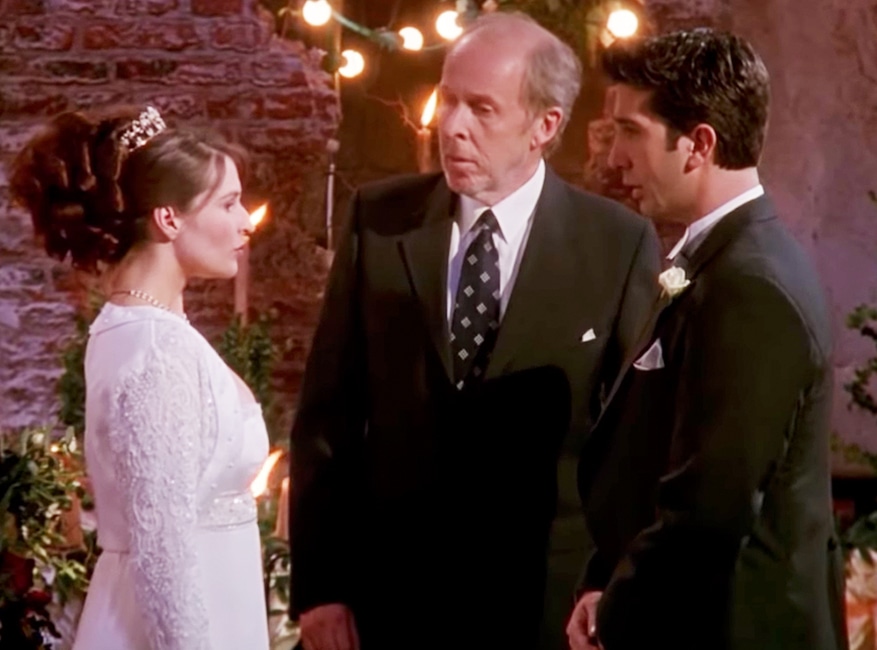 Friends knew a thing or two about cliffhanger endings, but none were as OMG-inducing as the fourth season finale when Ross (David Schwimmer), while at the altar with Emily (Helen Baxendale) during his London-bound wedding, said Rachel's (Jennifer Aniston) name during his vows. Fans were left twisting in the wind for four months before the show returned for season five. 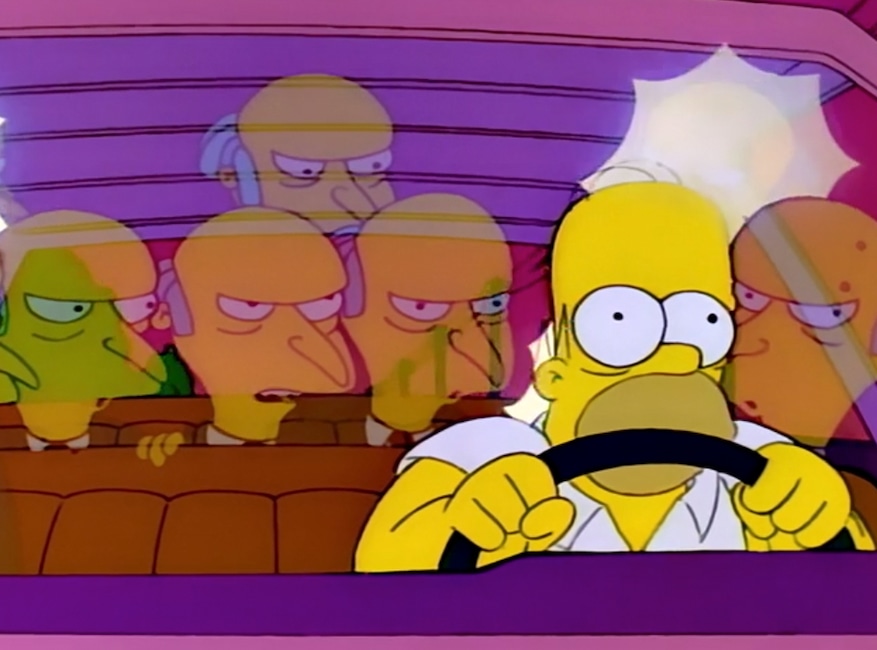 In a perfect parody of Dallas' Who Shot J.R.?, The Simpsons unleashed a mystery of their own in their sixth season finale with Homer's devious boss Mr. Burns getting shot by an unknown assailant. All summer long, people debated who in Springfield it could've been, with Fox even running a contest that never had a winner. When the show returned in the fall, it made sense why. Turns out baby Maggie had pulled the trigger. 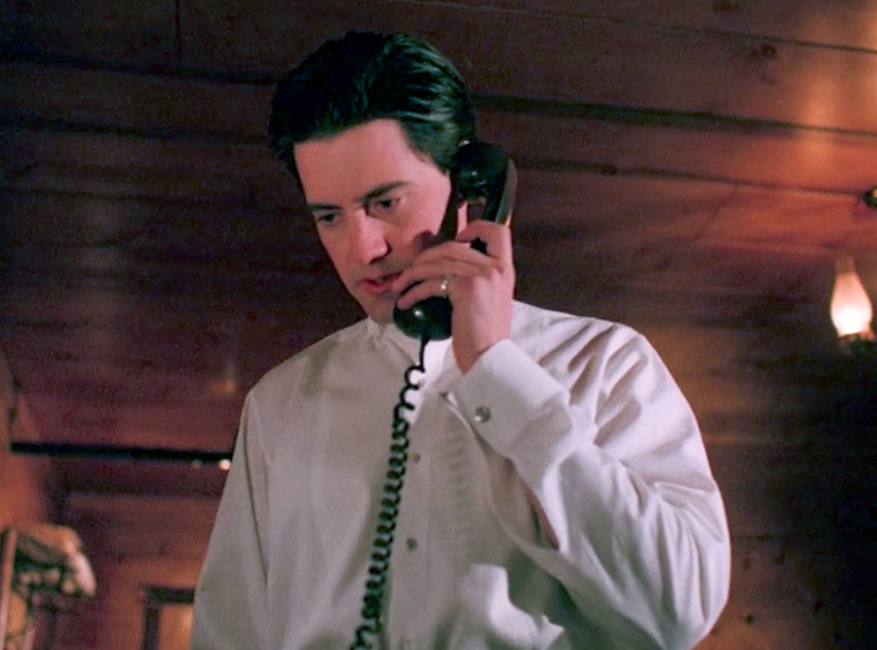 The question all throughout the first season of David Lynch and Mark Frost's groundbreaking ABC mystery was: Who killed Laura Palmer? But in the final moments of the season finale, a new question arose: Who shot Agent Dale Cooper (Kyle MacLachlan)? And more importantly, would he survive for season two? (Spoiler alert: He did.) 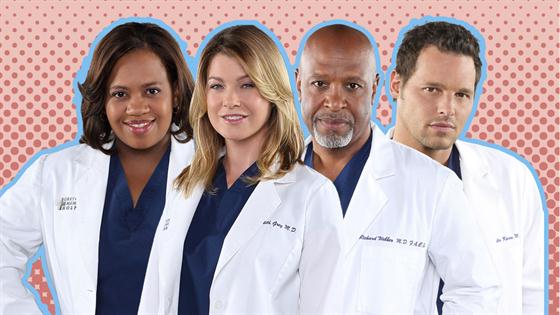