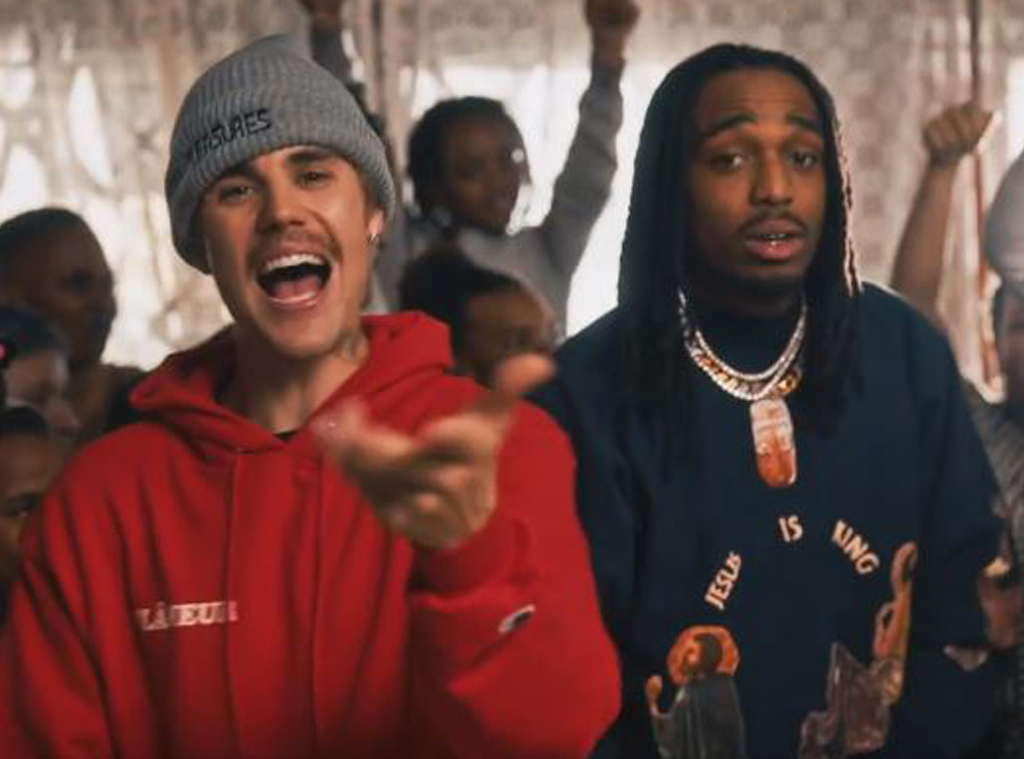 Justin Bieber's new music video is all about giving back.

The singer dropped his new single, "Intentions," on Friday, and it's a slow jam featuring Migos star Quavo. While the song is all about showering someone you love in praise and support, the video extends that message to people in need in California.

The video starts out with three introductions. The first is about a college student named Bahri. As the video reveals, "Bahri's mom was denied an education and wants her daughter to have that opportunity."

"Bahri's intention," the message continues, "is to be the first in her family to graduate college." The student is shown doing homework on her three-hour bus commute to and from school, showing how dedicated she is to her education.

The next introduction is about another college student named Marcy, who "grew up in the foster care system and became a mom at 19." Her intention, the video shares, is to continue to advocate for the rights of kids in foster care.

The third and final introduction debuts a poet named Angela, who has experienced homelessness and is fearful that she could again with her family.

As the video explains, "Angela's intention is to spread awareness and tell the stories of homeless women and children through her art." That's when Justin comes in singing the chorus.

As he sings, "Picture perfect, you don't need no filter / Gorgeous, make 'em drop dead, you a killer / Shower you with all my attention / Yeah, these are my only intentions."

Justin and Quavo spend time with Bahri, Marcy and Angela throughout the video, meeting their families and community members at Los Angeles' Alexandria House.

Everyone is dancing and having a great time together in the music video, but the best scenes come when the pop star meets the three women individually and gifts them with things to help them fulfill their intentions.

To Marcy and her friends, he gives a backpack full of school supplies. For Angela's part, he and Quavo bring her into a recording studio so she "could be able to put out your message and do what you feel called and led to do."

"It's on now," Quavo says, before Angela is seen in the booth performing her inspiring spoken word poetry.

As for Bahri, Justin and the student are taking a walk down the street when she starts talking about her difficult commute to school.

As the star replies, "What if I told you that you wouldn't have to worry about that anymore?" He then points to the black Fiat he got for Bahri and hands her the keys. And if these gifts weren't enough, the end of the video reveals that a donation of $200,000 was made to the Alexandria House, which had helped all three of the women in the video at some point.

Now, set your intentions and check out the music video to see the truly touching moments Justin and Quavo share with these women.