Play with fire and your designer bag might get burned. Disagreeing with Teresa Giudice can run a comparable risk—less flame, similar concept.

Teresa was up in arms during yesterday's new episode, which saw the Real Housewives of New Jersey maven picking sides without admitting it in the aftermath of Danielle Staub and Margaret Josephs' explosive hair-pulling, purse-incinerating brawl. Following her fellow cast members' increasingly volatile altercation last week, the Bravo personality was offered an ultimatum. "It's either [Danielle] or me," Margaret told her.

Arguing that it was Margaret who poured a full glass of water over Danielle's head (before the latter Housewives star proceeded to dump the contents of Josephs' Valentino clutch into a $600 candle and then grab her by the extensions), Teresa came to Staub's defense because they're friends now. Margaret was hurt and called Teresa's behavior an "embarrassment," words that did not go over well with the Giudice matriarch when Jennifer Aydin relayed the sentiment to her at Melissa Gorga's fashion show.

"I'm an embarrassment? She's an embarrassment," Teresa bit back, again referencing the drink-over-the-head situation. "I don't think the water was, like, that big of a deal," Jennifer shrugged. So Teresa nailed Ayden with the contents of her own water glass, right then and there. 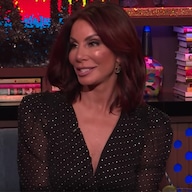 "Do you like that?" asked Giudice before tossing the actual glass over the bar. "It's only water!"

Teresa was trying to "prove a point," she reasoned, but Margaret didn't seem to understand what it was (even Jennifer, who was clearly not over-the-moon about her wet clothes, pointed out that she didn't respond by dragging Teresa across the room by her ponytail). During her after show interview above, Josephs insisted each respective water-throwing incident was completely different from the other.

"I think you're comparing apples to oranges," she said, later likening the hair-pull's repercussions to "having a car accident" amid another after show sit-down. "[Jennifer and Teresa] weren't in an argument. Teresa was being dramatic…she has a hard time, you know, making analogies," Margaret continued, emphasizing the gravity of Danielle's tug.

"I woke up the next day my head was pounding. I couldn't move my neck," she recalled. "And when I went to the doctor the next day, they were like, 'She could've snapped your neck, that's how hard she pulled it.' So, she was just really, really violent."

Though Teresa didn't comment during her own after show interview with Jennifer and Dolores Catania, the subject of her spontaneous soaking did eventually tell the camera that her subsequent discomfort while eyeing the Envy catwalk changed her mind about intentional water spillage as a general issue.

"I said, 'Damn, bitch proved a point,'" she concluded. And that's pretty much where we're at with the RHONJ inter-cast commotion right now.

Tune in for the Real Housewives of New Jersey's next episode Wednesday, Jan. 15, at 8 p.m. on Bravo!