Hours after news reports claimed that an emergency meeting was held at Buckingham Palace, light has been shed on the circumstances surrounding the last-minute ordeal.

In a statement made by Queen Elizabeth II's private secretary early Thursday morning, it was announced that Prince Philip "has decided that he will no longer carry out public engagements from the autumn of this year. In taking this decision, The Duke has the full support of The Queen."

The Duke of Edinburgh, 95, "will attend previously scheduled engagements between now and August, both individually and accompanying The Queen," the statement continued. "Thereafter, The Duke will not be accepting new invitations for visits and engagements, although he may still choose to attend certain public events from time to time."

"The Duke of Edinburgh is Patron, President or a member of over 780 organizations, with which he will continue to be associated, although he will no longer play an active role by attending engagements," the palace said. "Her Majesty will continue to carry out a full program of official engagements with the support of members of the Royal Family."

Earlier, the Daily Mail reported that Her Majesty's senior aides called for a household meeting. Servants from the royal homes across the U.K. were said to have been told to head to London.

And while meetings like Wednesday's aren't entirely unheard of, it appears that the nature of the timing lead many to speculate about what was going on behind closed doors.

"Although meetings involving the entire household are occasionally called, the way this has been done at the eleventh hour is highly unusual and suggests that there is something major to be disseminated," a source told the Daily Mail. 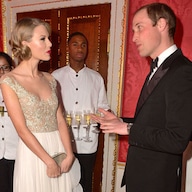 "But at the moment, only those closest to her genuinely know what on Earth this is all about."

Earlier Wednesday, both the Queen and her husband were seen in public. The 91-year-old Queen was photographed arriving at Buckingham Palace to meet with the British Prime Minister Theresa May, while Philip was seen attending an event honoring the new Warner Stand at Lord's Cricket Ground.

The Duke of Edinburgh quipped just before he pulled a cord to part a small curtain, "You're about to see the world's most experienced plaque-unveiler."

Amid a social media frenzy about the meeting, BBC's Peter Hunt reported that that there was "not cause for concern regarding the health of Queen Elizabeth and Prince Philip" despite increased speculation.

Philip, who turns 96 in June, carried out 110 days of engagements in 2016. He and Elizabeth will celebrate their 70th wedding anniversary in November.