Oprah Winfrey has an aha moment a minute—or so it would seem.

In Vogue's September issue, the living legend shares some words of wisdom while discussing her return to acting and the legacy of The Oprah Winfrey Show, which went off the air in 2011. And, boy, does she have it figured out. "I don't know of a person who can honestly, deeply, profoundly speak to the word contentment. I've tried to talk to other people about this thing: I have no angst. No...nothing," she says. "No regret, no fear...just absolute joyful contentment."

"I shall never forget Saturday morning, Oct. 17"—the day after Beloved opened in 1998. "I got a call from someone at the studio, and they said, 'It's over. You got beat by Chucky.' And I said, 'Who's Chucky? What do you mean it's over? It's just Saturday morning!'" Winfrey recalls. "I knew nothing about box-office projections or weekend openings. It was 10 o'clock in the morning, and I said to [my chef], 'I would like macaroni and cheese for breakfast.' And soooo began my long plunge into food and depression and suppressing all my feelings." What had been "the happiest time" in her life had turned into her a miserable, public failure. "I actually started to think, 'Maybe I really am depressed.' Because it's more than 'I feel bad about this.' I felt like I was behind a veil. I felt like what many people had described over the years on my show, and I could never imagine it. 'What's depression? Why don't you just pick yourself up?'"

Winfrey bought blocks of tickets to try to get Beloved's box office up. But, after six weeks, she snapped out of it. "That's when the gratitude practice became really strong for me," she says,  "because it's hard to remain sad if you're focused on what you have instead of what you don't have. It taught me to never again—never again, ever—put all of your hopes, expectations, eggs in the basket of box office. Do the work as an offering, and then whatever happens, happens."

2. Don't Live Your Life in Fear

Winfrey was nervous about returning to the acting world. After all, 28 years had passed between The Color Purple and The Butler. But the acting bug bit her again, and this past spring, she starred in HBO's The Immortal Life of Henrietta Lacks. "Oh, man. I was so afraid of that thing. Now I'm glad I did it. I was intimidated by the work, but in the end, what's the worst that can happen?" she says. "You get bad reviews—but in the age of Trump, it will be over in a day."

3. Know When It's Time to Say Goodbye

In 2006, Winfrey realized The Oprah Winfrey Show couldn't—and wouldn't—last forever. "I started thinking about the times: where we were, would I be able to take it digital. People were moving into 'I want to be able to watch it when I want to watch it,' and the 4 o'clock hour was no longer must-see television. I could feel that happening with the audience. Their behaviors were shifting, and the media world was changing. I had written something in my journals years before: 'I never want to stay too long in the ring so I end up punch-drunk,'" the 63-year-old TV titan tells Vogue. "I didn't want people saying, 'She shoulda quit that show three years ago!'"

"I didn't want to be the person chasing a phenomenon. And that is what the Oprah show was. All the right elements came together at the right time. That won't happen again," Winfrey adds. "People would ask me, 'Who will be the next Oprah?' And the answer is: 'There won't be.'" 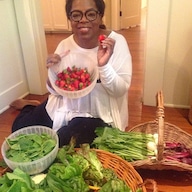 4. Remember That It's Not Always About You

Winfrey started her own television network, OWN, in 2011. "Ohhhhhh, I was so misled in my thinking. I thought I was going to create a network that was Super Soul Sunday all day long. I thought I was going to bring this spiritual consciousness–awakening channel! And I soon learned: Ain't nobody care about that," Winfrey remembers. "And the people told me: We'll listen to you on Sunday, but that's it. I was going to be the Anthony Bourdain of spirituality. I was going to go from country to country interviewing people in backwoods, in igloos, on mountaintops all over the world, bringing you a look at spiritual consciousness. And honeeeey chiiiild, didn't I learn! Oh, my God. America is not ready to be awakened in that way! So what I learned is, you got to give them—what did I call 'em?—snackables! You need snackable spirituality—snackable, digestible moments in an entertaining format, so people can receive it."

But she had learned something from all those years hosting The Oprah Winfrey Show. "There's not a human being alive who doesn't want—in any conversation, encounter, experience with another human being—to feel like they matter. And you can resolve any issue if you could just get to what it is that they want—they want to be heard. And they want to know that what they said to you meant something. Most people go their entire lives and nobody ever really wants the answer to 'How are you? Tell me about yourself.' And what was so beautifully...what is the word?...comforting about what happened every day on the Oprah show is that people would dress up like they were going to church. Sometimes I would notice somebody and I would say, 'Oh, wow, that's a really pretty green dress.' And she would go: 'I wore it for you! I knew you would notice me!'" she tells Vogue. "People just want to be seen; they want to be validated."

5. Power Down and Go Outside

She may be active on social media, but she's not a screen junkie. "I am telling you: If you want to expaaand yourself as an individual on the planet Earth, New Zealand's the place to go. The people are 100 percent present. They are not walking across the street on their cellphones," says Winfrey, who recently filmed A Wrinkle in Time over there. "Every single corner you turn, there is some breathtaking something or other going on: Lakes! Glaciers! Eagles! It's crazy."

6. Don't Get Married If You Don't Want To

Though Winfrey has been in a long-term partnership with businessman Stedman Graham for decades, the subject of marriage never came up. "Nobody believes it, but it's true. The only time I brought it up was when I said to Stedman, 'What would have happened if we had actually gotten married?' And the answer is: 'We wouldn't be together.' We would not have stayed together, because marriage requires a different way of being in this world," she tells Vogue. "His interpretation of what it means to be a husband and what it would mean for me to be a wife would have been pretty traditional, and I would not have been able to fit into that."

7. Don't Try to Stop Time—or Speed It Up

"In your 40s, you're coming into it, you're intellectualizing things, and you kind of know it and you feel it. But there is a deepening and a broadening and quickening of the knowing that happens in your 50s. Maya Angelou used to say to me, 'The 50s are everything you've been meaning to be.'" And if for some reason you haven't reached that resolution, don't worry. "By the time you hit 60, there are just no…damn…apologies," she admits. "And certainly not at 63."