Instead of hitting the open water with a motor yacht, Below Deck Sailing Yacht will document a new crew aboard the 180-foot-long sailing yacht Parsifal III. The yacht's existing crew consists of Captain Glenn Shephard, yachtie couple Paget Berry and Ciara Duggan and Below Deck Mediterranean chef Adam Glick.

While their route on the Ionian Sea may be a sailing lover's paradise, the Parsifal crew will have to power through the intense physicality of yacht sailing. Thankfully, this group of young, attractive and adventurous yachties are ready to work hard—and play even harder. 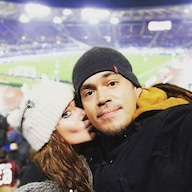 In fact, it's said that Berry and Duggan's relationship will be pushed to new heights.

"Working with your girlfriend is not easy," First Mate Berry notes in the first look above.

Will this couple make it through their time at sea? Find out when Below Deck Sailing Yacht premieres in 2020.

For a closer look at Below Deck Sailing Yacht's impressive crew, be sure to look through the images below! 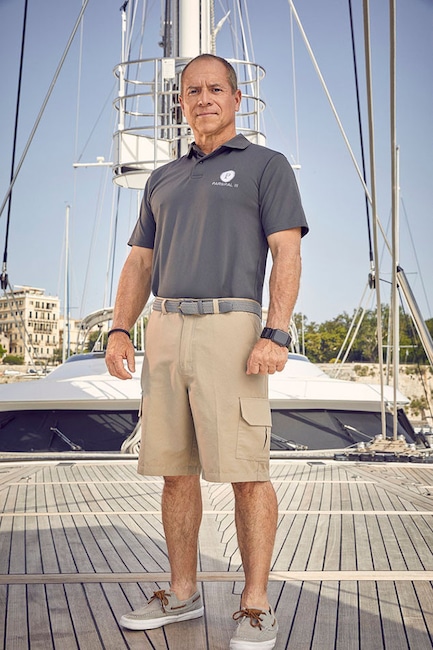 Originally from Montreal, Captain Glenn's life has always been dictating by the need to see the world. During his travels, he was invited on a 50-foot sailboat to work as a deckhand. Glenn was immediately hooked and has never looked back. With almost 20 years in the industry and 10 years as the Captain on Parsifal III, Glenn has hosted hundreds of high-end guests over many busy charter seasons. Glenn knows how to keep his cool while catering to the uber elite. This laid-back Captain is happy to pitch in when needed and likes to empower his crew to take charge. 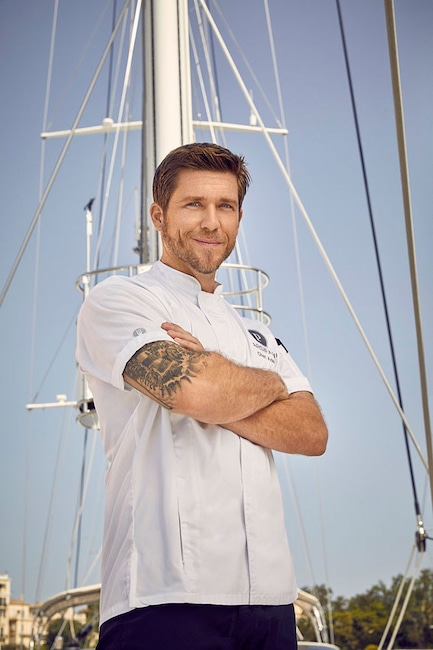 Adam is a casual California surfer who travels and lives in his camper van when he's not on charter. He likes to consider himself the "adventure chef," always seeking new heights and challenges and befriending strangers wherever he cooks. After earning his degree in Culinary Management from the Art Institute of California - San Diego, and working in San Diego's finest restaurants, he set out for the open ocean. Working on yachts for over 10 years now, chef Adam has vast experience as a high-end gourmet chef, both on land and at sea. Adam returns to the Mediterranean with a renewed sense of focus and a stronger culinary game. He has learned a lot from his past experiences in the Med, including the importance of reading the guests' preference sheets and not letting any distractions on board derail his focus in the galley. 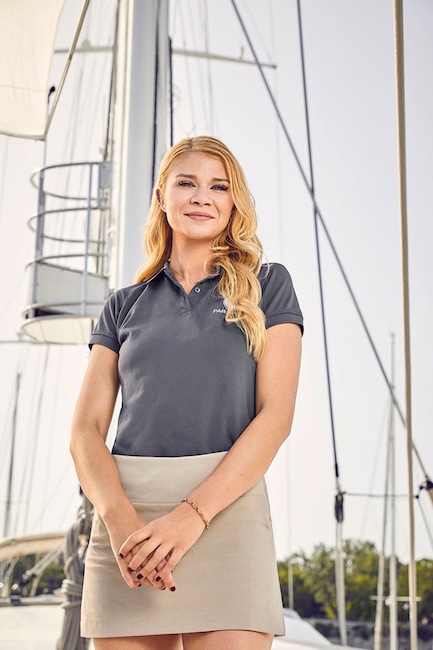 Born and raised in the suburbs of Detroit, Madison spent her childhood as a competitive figure skater. After graduating from Michigan State University, she succumbed to the wanderlust lifestyle and bought a one-way ticket to Fort Lauderdale where she jumped headfirst into the yachting industry. Now with two years of experience under her belt jumping from boat to boat, she is having the time of her life. Madison is full of energy, like the energizer bunny, and is a spastic, sarcastic and hilarious stewardess who is always up to something. 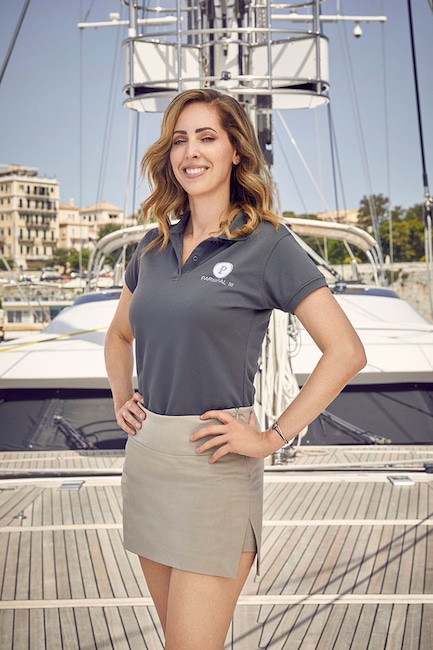 Originally from Canada, Jenna wasn't planning a career in yachting, but once she was bitten by the travel bug, she couldn't turn away from the lifestyle it provided. She hopped aboard her first yacht in 2004 and worked her way up over the years to Chief Stewardess. She took a brief break and headed ashore to work as a social worker, but quickly missed the yachtie life and returned back to sea. She is a hard-working Chief Stew with an eye for detail and taste for perfection. From her tablescapes to the way she manages her crew, nothing is left unfinished when she is in charge. She doesn't like to be challenged and holds her team to her high standards. If someone isn't performing to her level, Jenna is not a coddler, and will be quick to tell him them what they are doing wrong. But when the work is done and the charter guests are gone, this girl boss does have a sarcastic sense of humor and is always ready to party. 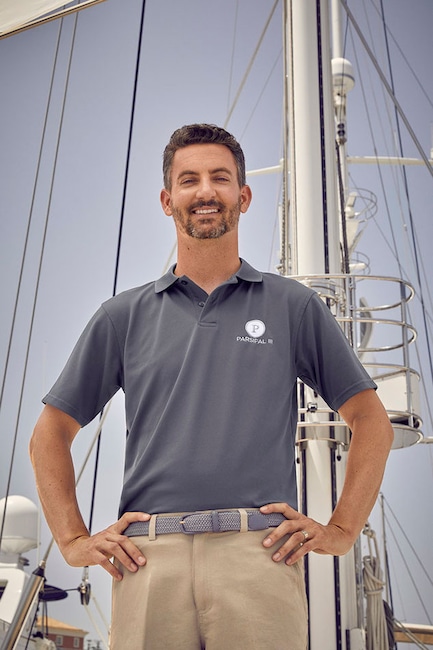 Born and raised in Sydney, Australia, Byron started his career as an automobile engineer where he spent his days repairing and restoring classic cars. But after needing a change of scenery, Byron fell into yachting and has never looked back. As the Chief Engineer, he is a fixer on the boat and luckily is familiar with Parsifal since he worked on the yacht five years ago. Byron had his share of wild days in his twenties and admits that he can still party with the best of them, but recently settled down, got married and had a baby, with his wife who he met while working in Fort Lauderdale. 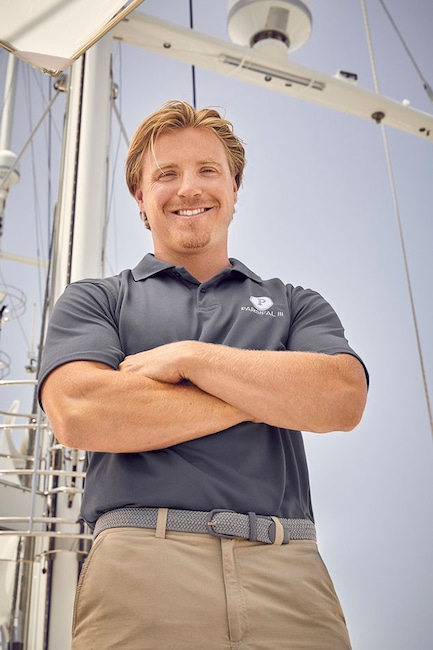 Born and raised in England, Paget has been sailing since the age of 13. He has lived on a variety of boats over the years including sailing yachts, catamarans, a converted oil barge and even a lifeboat. When he was 18, he joined the crew on a 27-meter sailboat in Spain and then spent the next three years exploring every corner of the Mediterranean, working his way up from Deckhand to First Mate. By 22, he took is first Captain position on a sailing catamaran. He met his girlfriend Ciara working on her family's boat and introduced her to the yachting industry. They have been dating for four years and work on Parsifal year-round. An avid outdoorsman, when he isn't sailing, Paget enjoys weightlifting, surfing, diving and playing the guitar. 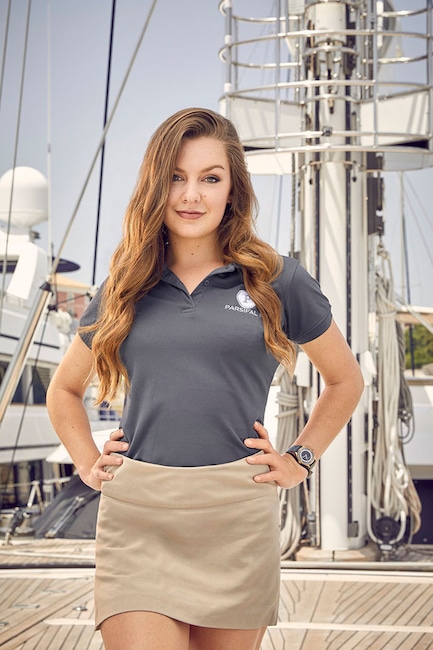 Born in South Africa, Georgia traveled to Thailand after high school to teach. She quickly got drawn into the world of yachting and has a wide repertoire of experience that ranges from private yachts, to charters, to catamarans. Georgia knows her way around both sailing vessels and motor yachts. Most recently, she was the sole stewardess on a 30-meter sailing yacht. Working on Parsifal is her first time working with a team of stews. A self-proclaimed extrovert, Georgia says she "parties like a rockstar and drinks like a sailor." She is always down for a good time and can throw down with the best of them. 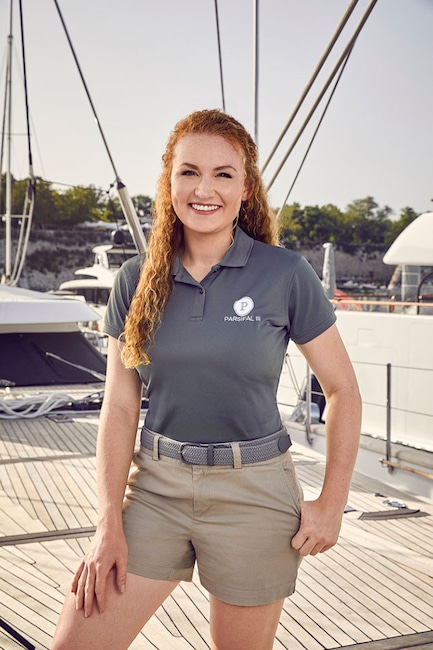 Having spent most of her childhood and adolescence traveling on her family's 45-foot sailing catamaran, yachting seemed like a natural career choice for Ciara. Ciara met Paget while he was working on her family's boat and he introduced her to the yachting industry. She got her first taste of yachtie life at 17 working as the sole stew and crew cook on a 27-meter sailboat in Spain. Since then, Ciara has worked extensively as sole stew, chef and first mate, running small yachts with her boyfriend Paget. Living year-round on Parsifal, she knows the boat inside and out, making her a force to be reckoned with. This charter season, Ciara steps in as a deckhand and although she has been dating her boyfriend Paget for over four years, they have never worked in the same department. 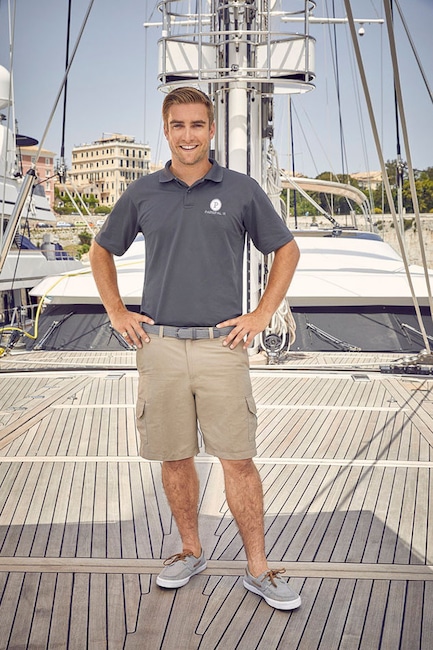 Born and raised in Maryland, Parker has been immersed in sailing culture ever since he was a kid, where he learned to sail at summer camp. For two years, he was a deckhand on an historic Skipjack built in 1901 where he mastered his detailing skills working on the repair and maintenance for a fleet of historic boats. Although new to the world of luxury yachting, Parker is a confident and capable sailor who has spent plenty of time on smaller boats. He is a hard worker who is not afraid to ask questions and is sponge when it comes to learning new tasks. A self-proclaimed "James Bond of the sailing world," this ladies' man brings his high energy and magnetic charisma to Parsifal.