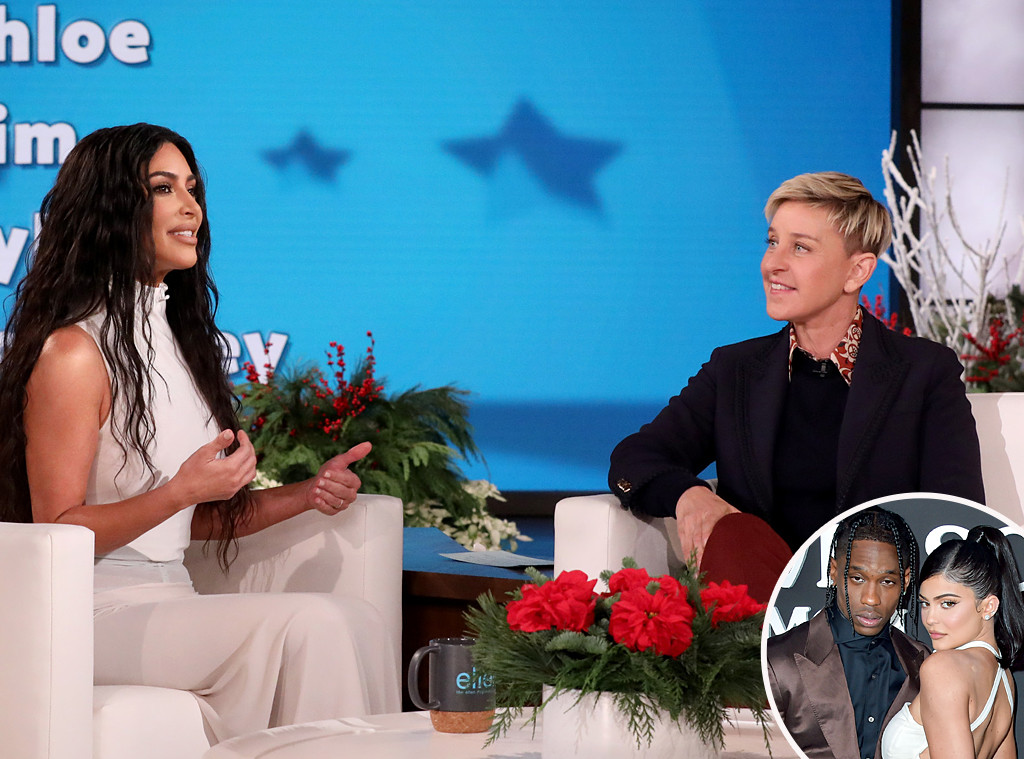 Keeping up with Kylie Jenner and Travis Scott's relationship is hard—even for Kim Kardashian!

On Tuesday, the KKW Beauty founder stopped by The Ellen DeGeneres Show and tried her best to break down Stormi Webster's parents' couple status for host Ellen DeGeneres, who joked that she was obligated to get to the bottom of it.

"No, I honestly don't know," she said. "But I think that they are really just close friends and co-parenting amazingly."

Back in October, Kylie and Travis decided to put their relationship on pause after tensions were rising between them. A source close to the couple confirmed the break to E! News, noting that it's "not a firm split" and that they're "taking space apart." Since then, the former loves have reunited several times as they've been raising their 22-month-old daughter. Most recently, Kylie and Travis attended Sean "Diddy" Combs' 50th birthday party together and even celebrated Thanksgiving with her family in Palm Springs.

Ellen was also quick to mention the diamond sparkler that the Kylie Cosmetics founder was spotted wearing, which big sister Kim said wasn't what it looked like.

"The big ring, definitely they're not engaged," she reassured the Ellen's Greatest Night of Giveaways host. "And I think she's wearing it on a different finger. I do know that she—I think she bought that herself…But, yeah, I don't know the status if they're together or not. I don't think they are."

Still on the topic of her famous sisters, Kim addressed sister Kendall Jenner's ranking of her parenting skills on The Late Late Show with guest host Harry Styles. According to Kendall's list, Kim ranked in at number three behind brother Rob Kardashian and sister Khloé Kardashian, respectively. While the SKIMS founder had no hard feelings, she did reveal which sibling wasn't happy with being ranked last.

"I completely understood that Kourtney [Kardashian] was sensitive about that because she's an amazing parent," Kim said, who has been in Kendall's shoes before. "So, Kendall just should've drank, or eaten a tarantula—whatever she had to do."

She added, "I mean, I covered up for Khloé and Kylie when they asked me on [James] Corden if they were pregnant. And I drank, like, bird sperm or something. It's, like, you gotta take one of the family team."

Switching gears, the mom of four talked about breaking tradition with her holiday card. This year, she and husband Kanye West posed alongside their children North, 6, Saint, 4, Chicago, 11 months, and Psalm, 7 months, instead of recruiting the entire Kardashian-Jenner tribe.

"First of all, it was just a time thing," Kim said. "I saw online, like, ‘They're feuding…They won't do a card together' and all this stuff. It was just a time thing of why I couldn't wrangle everybody and I was like, ‘This isn't my job. I'm not going to sit here and try to get everyone to do a card. I'm going to do one with my kids and my husband and my family.' And even that was so dramatic."

Despite all the smiles in the adorable photograph, Kim admitted that there were a couple of tantrums during their shoot. "It's the most anxiety to get four kids together smiling in a room," she said.

Find out which member of the Kardashian-West family had to be Photoshopped into their Christmas card in the video above!