Following several years of feuding, Kanye West and Jay-Z reunited at fellow rapper Sean "Diddy" Combs' star-studded 50th birthday party in Los Angeles on Saturday. The two were seen greeting each other with a handshake and big smiles and also posed for pics together.

"There was no drama between Kanye and Jay Z," a source told E! News. "The night was all about love for Diddy and that was apparent. Whatever happened in the past was left in the past. They posed for pictures and hugged. They were happy to see each other and very friendly."

"It was a room full of a lot of old friends and legends who don't get to see or talk to each other all that often," the source added. "Everyone seemed genuinely happy to come together for the occasion. Kanye and Jay Z chatted for a few minutes and the made the rounds."

The hip-hop stars' reunion marked first time they have been photographed together in public since they, Jay's wife Beyoncé, Kanye's wife Kim Kardashian, Diddy and then-girlfriend Cassie, and Alicia Keys and husband Swizz Beatz celebrated together at an MTV VMAs after-party in New York City in August 2016.

The following November, Kanye famously complained about Jay-Z and Beyoncé's behavior towards him while speaking onstage at one of his concerts. He accused Bey of refusing to perform at the 2016 MTV VMAs unless her "Formation" video beat his and Drake's to win Video of the Year, which it did. He then pleaded with Jay-Z to call him.

Soon after his onstage rant, Kanye canceled the remainder of his tour and was hospitalized briefly after suffering a mental breakdown.

A year later, Jay said on the Rap Radar podcast that Kanye's rant hurt him because he brought Beyoncé into it. Jay also told the New York Times that that he loves Kanye and reached out to him. "It's a complicated relationship with us because Kanye came into this business on my label, so I've always been like his big brother," he said. "And we're both entertainers. It's always been like a little underlying competition there with your big brother. And we both love and respect each other's art too, so it's like, we both- everyone wants to be the greatest in the world. Then it's like a lot of other factors that play in it. But it's- we're gonna always be good."

When asked if there was still tension between him and Kanye, Jay said, "Yeah, yeah. But that happens in the long relationship. You know, hopefully when we're 89, we look at this six months or whatever time and we laugh at that."

"There's gonna be complications in the relationship that we have to get through, and the only way to get through that is we sit down and have a dialogue and say, 'These are the things that I'm uncomfortable with,' These are the things that are unacceptable to me.' This is what I feel. I'm sure he feels that I've done things to him as well. I'm not a perfect human being by no stretch." 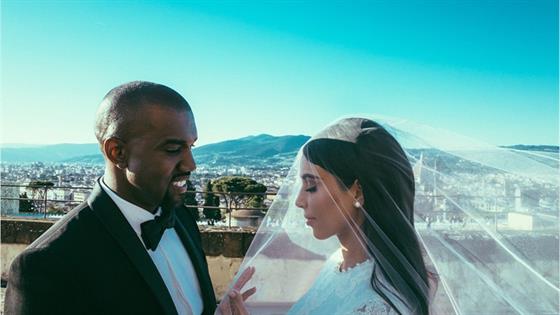 Now Playing
Up Next
Kim Kardashian & Kanye West's Wedding: Behind the Scene Pics

Meanwhile, Jay released his 4:44 album. It contains the song "Kill Jay-Z," which appears to reference Kanye with the lyrics, "I know people backstab you, I feel bad too / But this 'f--k everybody' attitude ain't natural / But you ain't the same, this ain't KumbaYe / But you got hurt because you did cool by 'Ye / You gave him 20 million without blinkin' / He gave you 20 minutes on stage, f-- was he thinkin'?/ 'F--kin' wrong with everybody?' is what you sayin' / But if everybody's crazy, you're the one that's insane."

In 2018, Kanye said on iHeartRadio's The Breakfast Club show that he was "hurt" that Jay-Z and Beyoncé did not attend his wedding to Kim in 2014.

"I understand they were going through some things, but if it's family, you're not going to miss a wedding," he said, referring to past cheating allegations involving Jay.

He added that he did not think he ever asked Jay directly why they didn't attend.