Katharine McPhee and David Foster: How the Unlikely Couple Beat the Odds and Found Love

When Katharine McPhee and David Foster found themselves back in each other's orbit, they were both nursing broken hearts.

The pair, who took their May/December relationship to the next level in July 2018 with the announcement of their engagement before finally tying the knot on June 28, first sparked rumors of a romance a little over a two years ago when they were spotted out on a PDA-filled dinner date at a time when they were both finally learning how to be single again. McPhee was just out of a two-year relationship with former Scorpion co-star Elyes Gabel, a relationship that began when her marriage of six years to Nick Cokas had fallen apart. And Foster had just recently announced that, after four years of marriage and nine years together, he and his Real Housewives of Beverly Hills star wife Yolanda Hadid were calling it quits as well.

David Foster Taking a Back Seat to Wedding Planning

In January of 2017, a mere five months before Foster and McPhee were spotted out on that fateful dinner date at Nobu in Malibu, he admitted to Vanity Fair that, for the first time in his adult life, he was approaching his love life differently. "I tend to go from marriage to marriage—leaving one wife for another," he told the publication. "This is the first time in my adult life that I've been single. It's a very powerful feeling, but I'm not used to it. Someone said to me recently that you need to be very careful about the person you pick to spend the rest of your life with. It's kind of weird that I'm hearing that now and thinking, Oh, right."

If Foster's decision, made then at 67, to reconsider his usual romance habits seemed unlikely, then his connection to 33-year-old McPhee seemed even more so. Sure, music was a common denominator between the two, but what really could they have in common? And yet, they've managed to prove us wrong at every turn. 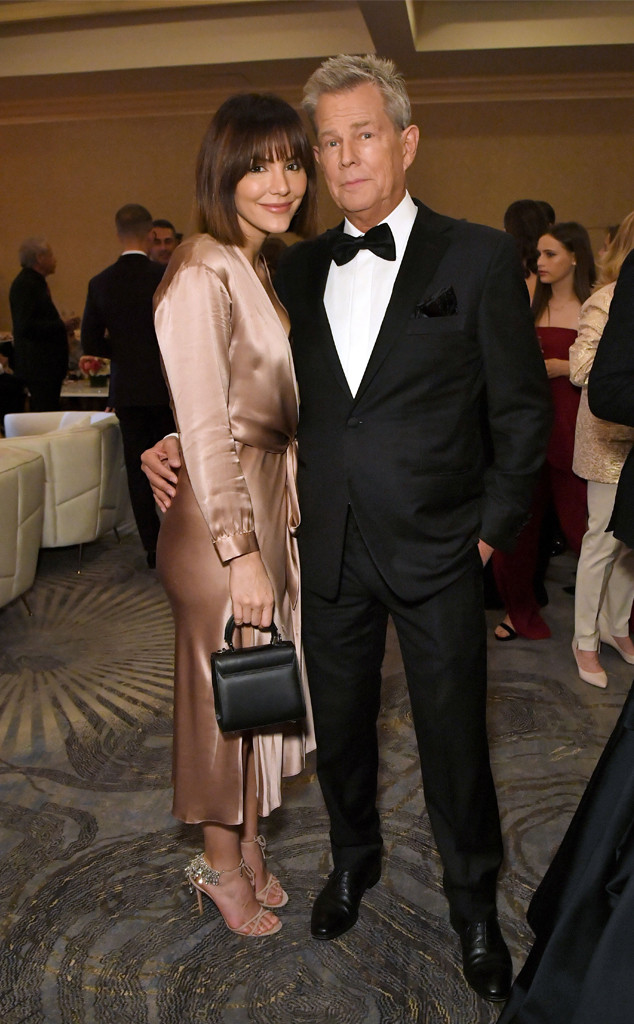 Six months after that night at Nobu, McPhee, who met the iconic music man back in 2006 on the set of American Idol when he served as a guest mentor during her season, igniting a relationship that involved both professional collaborations and personal run-ins, was still by his side as he celebrated his 68th birthday at West Hollywood hot spot Craig's back in November 2017. "David and her were affectionate," a source told E! News at the time. "He had his arm around her at times and they looked happy."

While the nascent couple had yet to publicly confirm the nature of their relationship, by the time of Foster's birthday celebration, his five daughters—including Sara and Erin Foster, who were also present at the festivities—had "all accepted their relationship," our insider said. 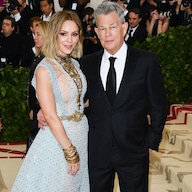 As the pair continued to play coy, with McPhee saying she was "pretty single" and that people could "say whatever they want" about her relationship with Foster in the December 2017 issue of Health (which was released online mere days after Foster's birthday celebration in early November), they were spotted sitting courtside together at an NBA game between the Los Angeles Lakers and the Memphis Grizzlies. "They seemed to be having a fun," an eyewitness told E! News. "They were chatting with the people in the seats next to them….Didn't see them kiss or hold hands but [they] certainly seemed like they were into each other and the game."

Meanwhile, daughters Sara and Erin made it clear just how cool they were with the relationship that no one would confirm actually existed, speaking to E! News a few days after the Laker game. "We love Katharine McPhee. We love our dad. We want our dad to be happy. We don't care who he dates...don't really care how old they are," Sara said, adding, "We don't know if it's her." 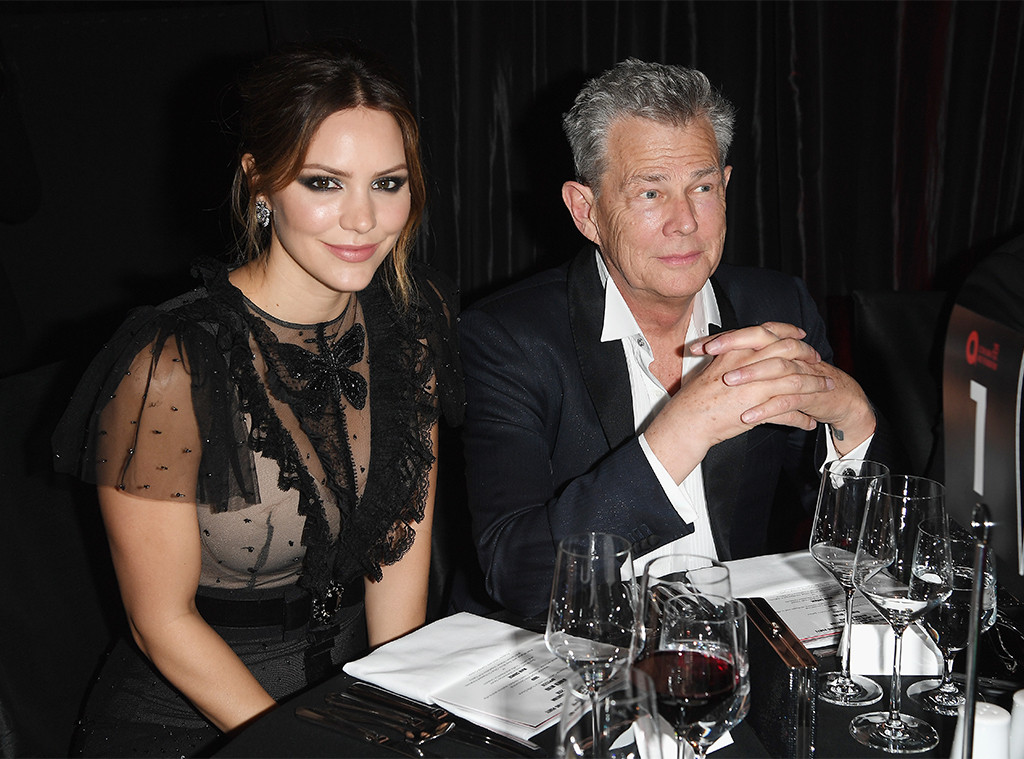 But by the time they were spotted sharing a kiss outside of Beverly Hills restaurant E Baldi in the beginning of December, there'd been a clear shift in the seriousness of the relationship. "David and Katherine are more serious than they ever have been, and don't care what others around them think," a source told E! News at the time. "David and Katherine have been spending a lot of time together recently and are not afraid to show affection now."

"David is usually a playboy but Katherine has made him change his ways, and he is really comfortable with her," the source added. "He tries to fit Katherine into his schedule with dinners and lunches during the week. They both love being out in public together, and are enjoying each other's company. Katherine has always had a crush on David, and she's happy that their relationship is transpiring." 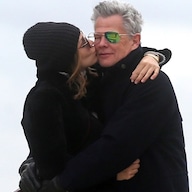 A post-Christmas trip to Paris, where Foster met McPhee after she'd spent her holiday in the romantic foreign city with family, only seemed to confirm just how in love the couple had become, with the duo unable to keep their hands off one another as they strolled through the City of Lights. "They stopped on a street corner and wrapped their arms around each other to stay warm," an eyewitness told E! News. "It looked like they were very happy to be reunited in such a romantic place."

With the pair still going strong in as 2018 rolled around, it appeared that the words Foster had spoken to Vanity Fair a year earlier about his usual marriage-hopping and newfound power as a single person were still very much in the back of his mind, as there were no plans to approach marriage just yet. "David has not shown any interest in getting married again. He hasn't discounted how he feels about Katherine but there are no plans for them to even get engaged anytime soon," a source told E! News, adding that McPhee wasn't exactly pushing for a proposal either.

But as the first half of the year went by, with the couple attending Elton John's Oscar viewing party and walking the red carpet at the Met Gala together, Foster supporting McPhee as she made her Broadway debut in Waitress, and just the usual progression of an authentic relationship unfolding, something changed. And suddenly, marriage was just what each wanted from the other. "Katherine has been wanting this for a while now," a source revealed to E! News shortly after the pair revealed that he'd popped the question while on holiday in Europe. "David has been planning the engagement, but has kept it very secretive. Only a few family members knew about his plans."

"They are both very happy and over the moon excited," our source continued, adding, "David's children are all very accepting of Katherine now, and are very happy for their Dad."

The path to love is often winding and makes very little sense. But when it's right, it's right and when you know, you just know. And it's clear that, finally, these two did. Unfortunately, the path to the altar after the engagement didn't come without its own nonsensical and downright tragic speed bump.

Just weeks after McPhee and Foster announced they were engaged, the singer took to Instagram to share the sad news that her father, Daniel McPhee, had passed away. "I can't believe I'm even writing this...But it is with heavy heart that I share that my sweet sweet Papa left this earth yesterday morning," she wrote alongside a photo of her with her father. "We as a family are completely heartbroken and devastated." 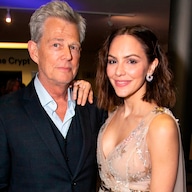 Reflecting on the loss a week later, McPhee took to social media yet again to share a photo of her gorgeous engagement ring and let fans in on just how Foster was supporting her in her time of need. "My ring was the last thing I showed my dad before he passed and makes me smile when I look at this as a reminder of our last conversation. And now I'm ready to share with all of you what has been my sunshine amongst this painful loss," she wrote. "My love wisely said to me the other day that 'death is the only thing that is 100 percent inevitable and the thing we are least prepared for.' So today we're celebrating life and not forgetting love."

It hasn't been all tragedy in the year between engagement and wedding, however. While McPhee's been busy in London in this first half of 2019, reprising her lead role in Waitress on the West End, she and Foster's daughters have had fun with the unique circumstances of their impending stepmother-stepdaughter relationship. And while McPhee and Foster were spotted leaving a Beverly Hills courtroom in May, presumably with their marriage certificate in hand, there'd been no real rush to the altar.

The wedding, Foster's fifth and McPhee's second, wasn't expected to be a lavish affair, with a source telling the Daily Mail that the festivities would be small and intimate, with around 80 guests. "It won't be a big showbiz wedding like his previous nuptials," the insider said. "This one is more focused on their respective families and very close friends"

As a source told E! News, the happy couple made sure to approach the traditional wedding week festivities with a bit of laid-back chill. "They didn't have a formal rehearsal dinner and their entire celebrations have been very casual and fun," the inside noted. "They both agreed that they wanted everything to be light and easy and wanted their guests to have fun. They have both been married and wanted this celebration to be very easy and not stressful."

As for the big day itself, June 28, the date holds a special significance for the two, as McPhee shared on Instagram in the hours leading up to her nuptials. "Exactly 13 years ago today my very first single, 'Somewhere Over The Rainbow,' was released right after Idol," she wrote. "Today... I'm marrying the man who produced it. Life is full of beautiful coincidences, isn't it? Thank you for taking me over the rainbow, David."

Mazel tov to the happy couple!