UPDATE: Eric Holder was charged on Thursday with fatally shooting Nipsey Hussle and wounding two others outside the rapper's clothing store in South Los Angeles over the weekend, the Los Angeles County District Attorney's Office announced in a statement to E! News.

Holder, who as arrested on Tuesday, was charged with one count of murder, two counts of attempted murder and one count of possession of a firearm by a felon. He is also accused of using a firearm and caused great bodily injury and death. If convicted as charged, Holder faces a possible maximum sentence of life in state prison. Meanwhile, the Los Angeles Police Department is continuing to investigate the case.

Eric Holder, the man suspected of killing rapper Nipsey Hussle on Sunday afternoon, has been arrested.

LAPD tweeted the confirmation on Tuesday afternoon, writing, "Eric Holder, the suspected killer of Nipsey Hussle, has been arrested and is in police custody. Thank you to both our community for the heightened awareness/vigilance, and our partners at @LASDHQ."

E! News can confirm that L.A. County Sheriff's deputies responded to an incident in the neighborhood of Bellflower on the 9000 block of Artesia Boulevard on Tuesday afternoon and they detained a man who is believed to be 29-year-old Holder. According to the Los Angeles Times, Los Angeles Police Department detectives went to the Sheriff's station in Lakewood to confirm Holder's identity.

The LAPD had announced on Monday that Holder, 29, was "wanted for homicide in the shooting of Nipsey Hussle." 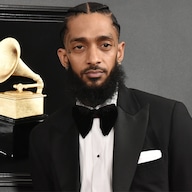 The rapper, born Ermias Asghedom, was killed Sunday, Mar. 31 in front of The Marathon Clothing store in Los Angeles. In a statement released by the LAPD, the authorities alleged the suspect approached Hussle and two other men, fired "numerous" shots and then fled the scene in a vehicle waiting nearby that was allegedly driven by an unidentified female. The police say Holder was last seen in a 2016, white, four-door Chevy Cruze.

According to the authorities, two of the victims were transported to a nearby hospital while one refused medical treatment at the scene. Hussle died from gunshot wounds to the head and torso.

The police asked the public to share any information they may know about the case.

"Detectives have worked tirelessly and are now asking for the public's help in locating the suspect in the case," the LAPD wrote in a tweeted statement. "The suspect has been identified as 29-year-old Eric Holder of Los Angeles. Anyone with additional information is urged to call South Bureau Detectives, at 323-786-5100."

LAPD Chief Michel Moore hosted a press conference about the case on Tuesday. During the press conference, he said the police were able to identify Holder through video evidence, as well as through statements and information provided by the community. He also said police believe Holder and Hussle knew each other and that the shooting could have been over a personal dispute.

In addition, he said the authorities are working with the district attorney to seek the information needed to obtain a warrant for arrest.

Eric Holder, the suspected killer of Nipsey Hussle, has been arrested and is in police custody. Thank you to both our community for the heightened awareness/vigilance, and our partners at @LASDHQ. pic.twitter.com/0zujy89Yfm

After news of Hussle's death broke, several artists—including Beyoncé, Cardi B, Rihanna and Drake—paid tribute to the late rapper on social media.

"I'm praying with every ounce of my heart for your family," Beyoncé wrote on Instagram. "Rest In Peace, Nipsey."

A vigil was also held at the scene of the shooting on Monday; however, 19 people were injured at the memorial. According to NBC News, two were in critical condition—including one who had been hit by a car—and two were in serious condition.

Fire officials told the news outlet the majority of people hospitalized seemed to have suffered "trample injuries" from people falling over or being knocked down as crowds attempted to leave.

Per The New York Times, reasoning for the fleeing was not immediately clear.